New Pokémon Snap Tips and Tricks to Level Up, and Unlock Everything, in a Snap

New Pokémon Snap on the Nintendo Switch is the very long-awaited sequel to 1999's Pokémon Snap, and it's everything we dreamed it would be.

The folks at Nintendo were kind enough to give us a key for the game on the Nintendo Switch, and after completing the main game and playing for more than a dozen hours, we're loving how much more there still is to see and do in this photography adventure.

But if you're new to the series, you might be wondering how to progress, why you're being asked to return to the same areas again and again and how to capture the very best photos of every type of Pokémon. For the most part, the key lies in increasing your research level, which can help you unlock new areas (and their nighttime variants), make new Pokémon appear and unlock new routes along your path. Keep reading for our top tips and tricks to leveling up and unlocking everything in New Pokémon Snap.

Snap Every Pokémon You See

This might sound obvious, since New Pokémon Snap is a photography game about snapping pics of Pokémon, but you should be as thorough as possible on your journey through each course. Take the best pictures you can of every Pokémon you lay your eyes upon, as each one can help you accumulate points toward your research level. Don't be shy, because even if you're only catching the rear end of a Pokémon as it runs away from you, getting that Pokémon in your Photodex will boost your score.

Taking great photos isn't just about pointing your camera and snapping a pic. Try capturing Pokémon in as many different and unique poses as possible, because photos are ranked on the rarity of the poses you capture within them. Your Pokémon pics are rated as either one-star, two-star, three-star or four-star photos, decided entirely by what the Pokémon are doing. To maximize the points you earn and raise your research level quickly, you'll want to eventually submit one of every Pokémon photo for each of the four star ratings available. Of course, you can only submit one pic of every Pokémon per turn, so this means repeat visits, and staying determined along every step of the way.

At a loss for what poses you can possibly capture next? Once you've finished Florio Island's Illumina Spot, you'll unlock LenTalk Requests. These tasks from the game's other characters will help guide you toward finding new Pokémon, poses and more, so keep your eyes peeled. 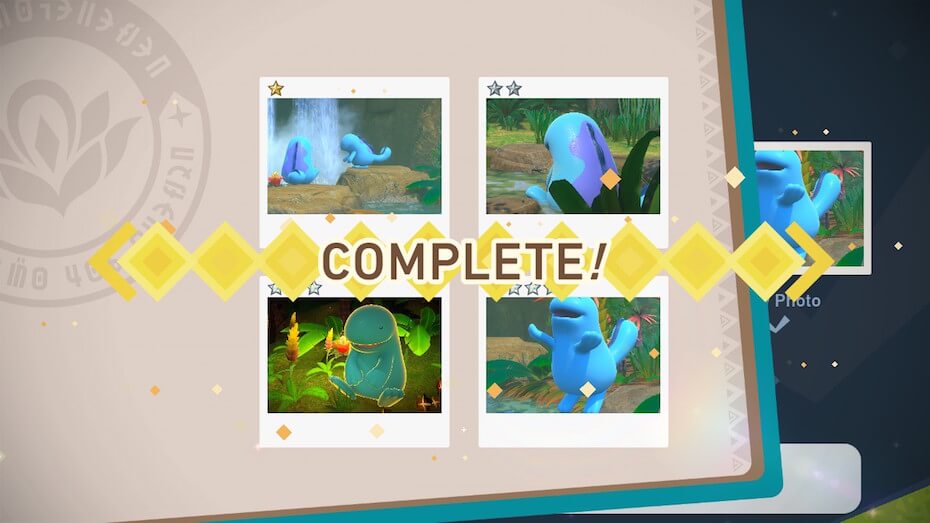 Just because a pic earns you four stars doesn't necessarily mean it'll be worth a ton of points. There are also other factors to keep in mind when snapping, because each pic will earn you either a bronze, silver, gold or diamond ranking, and you're going to want diamond (scoring more than 4000 points) as often as possible.

But how can you nab these elusive diamond pics? In addition to the quality of the pose, you'll want to ensure that the Pokémon is facing you, that it takes up as much of the screen as possible without any of its body being offscreen and that the Pokémon is centered. You'll also earn bonus points if there are other Pokémon in the photo. The better you understand these mechanics, the more high-scoring shots you'll be able to take. 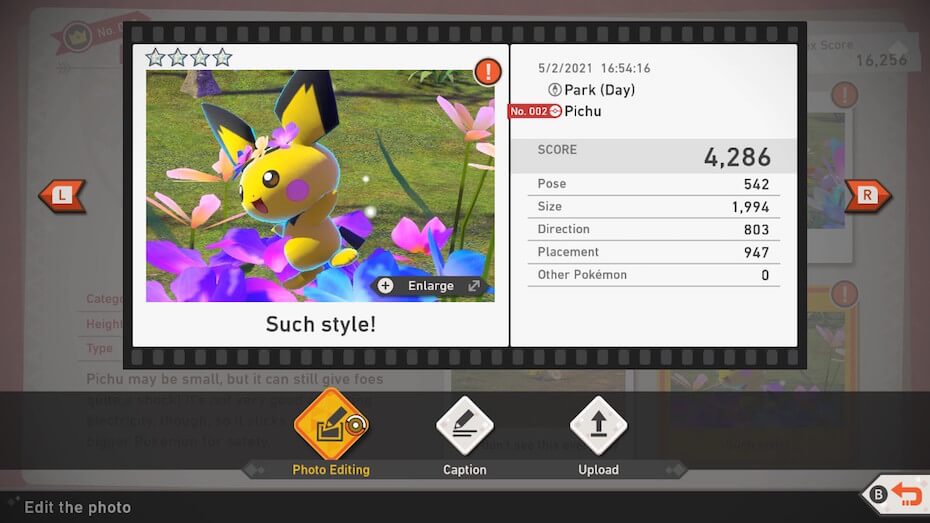 Throw Them Everything You've Got

New Pokémon Snap isn't just about moving through environments and snapping pics. It's also interactive, and as you unlock new items, there's a lot you can do to influence the world you're in. Apple-like Fluffruits can lure hungry Pokémon closer to you, where you can snap them nibbling, or even startle them and get them to move or react. Once you've earned Illumina Orbs for the different islands, you can throw them at Pokémon or nearby Crystablooms to create the Illumina Phenomenon, which sometimes makes Pokémon display new and unique behaviors. The melody player can also get interesting reactions out of Pokémon, or even wake sleeping ones. Some Pokémon even react to the sound of scanning your environment. It's worth trying every approach with every Pokémon to capture every possible behavior and snap every possible pose.

But that's not where the utility of New Pokémon Snap's scanner ends. For one, it'll label unregistered Pokémon with an exclamation point, and also show you the location of certain hidden Pokémon, so you can uncover how to lure them out. The scanner is also great for revealing areas of interest that might lead to new Pokémon to snap, as well as show you branching routes that just might lead you somewhere you've never been.

Crystablooms are flowers that can be activated by throwing Illumina Orbs, creating the Illumina Phenomenon. But before you can unlock the orbs in each area, you'll want to take a picture of each island's unique Crystabloom variant. Registering them to your Photodex will lead to obtaining this valuable interactive item, so that you can capture new poses and images of coveted Illumina Pokémon.

Use the Auto Select Feature Wisely

An auto select future after each run will help you automatically pick pictures to submit to Professor Willow, but it's not always in your best interest to choose this option. Auto select will typically go for the highest star rating possible, rather than the photo that will net you the most points at that moment—though it will pick the best picture of that ranking. This is important because you can only submit one photo of each Pokémon species during each run. When you know you've taken great, high-star pics, feel free to save your time and use auto select. Otherwise, manually picking your photos is your best bet.

Getting to a new research level can significantly change each course and the Pokémon spotted there. It's very possible that you missed a few things if you leveled up too quickly. By pressing X over the name of the course, you can select the research level of your choice and try all over again. It's worth revisiting each course at each level, and once you've unlocked the turbo feature, it's also worth speeding through each one to see what's different when your timing has changed. 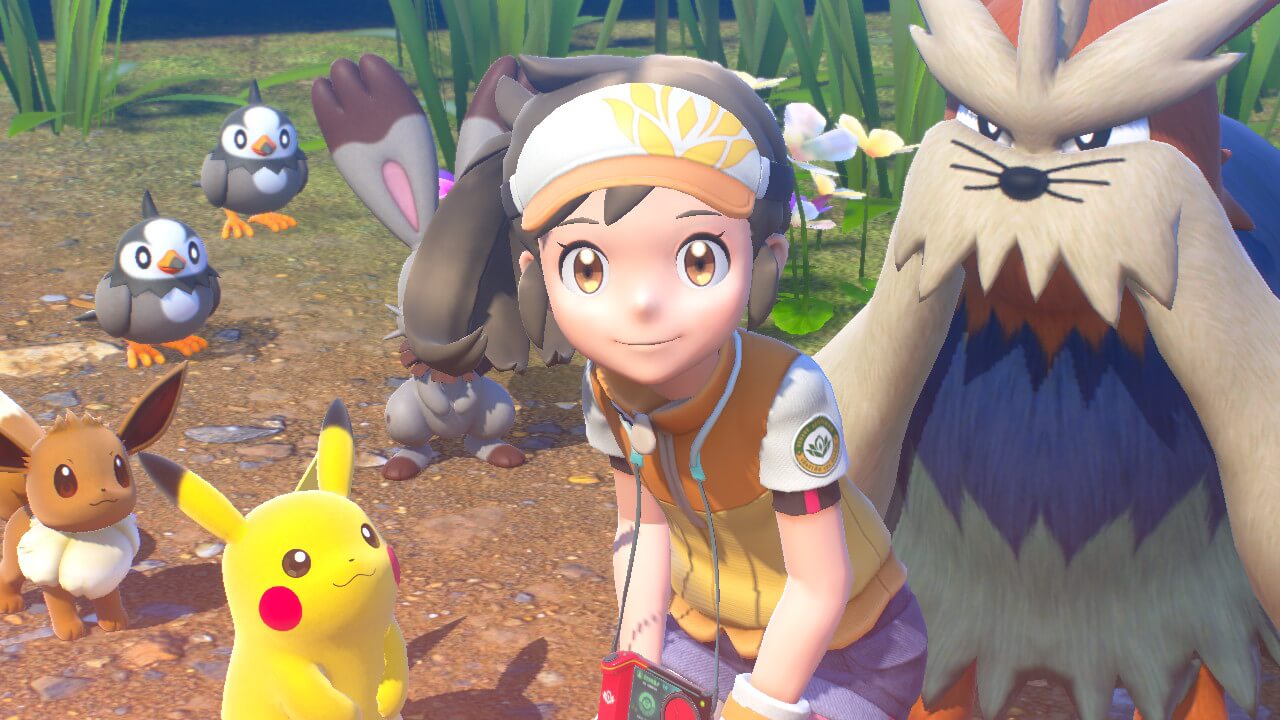 Love even the most obscure Pokémon games? Click HERE to discover everything that happened when I started brushing my teeth with Pokémon Smile.