I've struggled with getting to sleep pretty much my entire life, and I'm always on the lookout for products that will help me fall asleep faster and stay asleep longer.

Historically, the things that have worked best for me are simple sleep hygiene. By committing myself to a wind-down routine and putting away my phone at least an hour before bed, I can cut down on a lot of the tossing and turning. Sleep meditations or binaural white noise help me with the rest. Even so, I'm always looking for other tools that can make my sleep even more restful.

That's why Nodpod immediately piqued my interest. I sleep with a weighted blanket even on the hottest summer days, and the idea of a weighted eye blanket seemed right up my alley. I agreed to give Nodpod a test run, and I was really glad I did.

Nodpod is a weighted sleep mask designed to help its users get a better night's sleep. The mask has four pods evenly filled with microbeads, providing a gentle pressure, which is said to have a calming effect. The mask also has scalloped edges, allowing it to contour to the face and block out any light. It also lacks elastic or velcro straps. You can either rest it over your eyes or pull one end through a slit on the other end to secure it comfortably in place, depending on your individual needs.

The mask also has two textured sides. One is a jersey cotton that's cool to the touch and great for the summer, while the other is a warm microfiber for chilly nights. Because it can warm up a bit with skin contact, it can also be placed in the freezer so it maintains a chill well into the night.

Nodpod masks come in nine colors vibrant colors, including the Fossil Grey and Palm Leaf Green I received, and are 29 inches long, weighing 9 oz. They retail for $32 each.

Once I received my Nodpod, I was eager to give it a whirl that very night. After going through my typical nighttime routine, putting my book away and turning off the lights, I pulled on my weighted blanket and then rested this green Nodpod mask over my eyes. 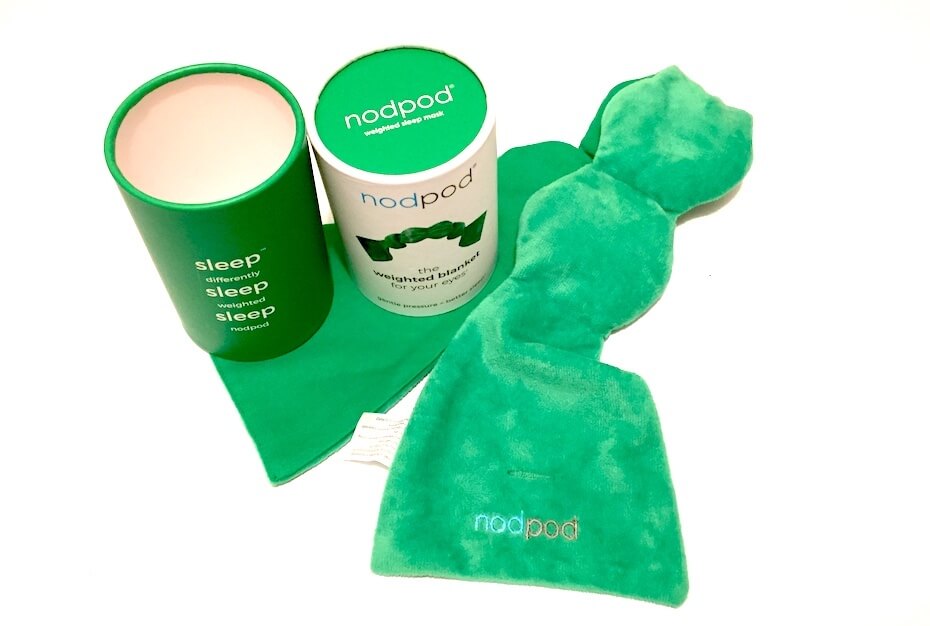 I immediately welcomed the weighty sensation over my eyes, which seemed to have exactly the soothing effect I'd anticipated. As a big fan of weighted blankets in general, I thought it was great being able to apply the same principle to my eyes, without actually pulling my 12-pounder over my head and trapping in all the heat.

I didn't immediately drift off to sleep, but I wasn't expecting to. Instead, it seemed to streamline the relaxation process. I felt that my mind raced less, and when I woke up feeling well-rested, I felt the Nodpod had been partially responsible.

On subsequent nights, I was quick to wear the Nodpod again. Again, it never provided me with instant rest, but it did seem to help. On nights when I was having a particularly hard time, it seemed to focus me during sleep meditations, which I appreciated, as I can easily get distracted during them.

I've used Nodpod most nights since I received it. There have been occasions (especially during this recent heatwave) where I've had to remove the mask because my skin has warmed it too much. However, I've found that I often fall asleep shortly afterward, the pressure already having had its effect. I've also tried it straight from the freezer on a couple of occasions, which I enjoy, but more often than not, I don't have the foresight to freeze it ahead of us.

I also enjoy that Nodpod doesn't just work for nighttime sleeping. I particularly like using it during daytime naps, when even closing the curtains can't keep out the bright rays of the sun. For those times I just need to rest in the middle of the day, Nodpod usually puts me right to sleep. It's also a lifesaver when I'm having a migraine. Not only does it apply gentle pressure in all the right places when my head hurts, but it also does a great job of keeping out painful light when I'm sensitive to it. It's an ingenious idea, and it's quickly become another element in my sleep routine.

Nodpod likely won't work the same for everyone, but in my experience, it's an effective way to get to sleep more easily. I've shared with family members, who tell me that it puts them to sleep almost instantly. The weighted eye blanket is comfortable and easy to wear, blocking out light while also allowing the eyes to rest.

At $32 for a Nodpod, the price also isn't totally prohibitive, though it may be more than some are willing to pay for a chance at better sleep. You may want to try a makeshift weighted eye pillow at home before you commit to the full-priced item if cost is an issue. However, if you love weighted blankets for helping you sleep, the Nodpod might be exactly what you've been missing.

Struggle to sleep? Click HERE to find out what happened when I tried Harry Styles' sleep meditation.