Nuggs Vegan 'Chicken' Nuggets Are Undoubtedly the Nugget of the Future

Like anyone with taste, I'm a huge sucker for chicken nuggets.

Sure, tenders, strips and the like are great for when you're feeling fancy, but most of the time, I'd rather go for the humble nugget. Unfortunately, ever since I moved to a relatively remote location, the nearest fast food nuggets are at least a 30-minute drive away, so going out to get them is a whole outing.

And frozen nuggets? They just do not do it for me. Even thrown into my trusty air fryer, the texture and taste are all wrong. Still, I'm always open to trying new things, and when the folks behind the science-based NUGGS vegan "chicken" nuggets offered to send me some to try, I couldn't resist.

Why do they call NUGGS "the Tesla of chicken"? I tried them myself to find out.

Nuggs are vegan, plant-based nuggets meant to simulate the taste and texture of real chicken nuggets using a wheat and soy protein blend and "advanced soy protein technology." Not only is it good for the environment, and our bodies, to avoid meat products, but it can be good for our consciences, too.

NUGGS contain 13 grams of protein per serving—about 25% more than chicken chicken nuggets. Plus, each serving has only 10 grams of fat, or 40% less than a serving of animal-based nuggets. They're also totally cholesterol-free, which sounds like it shouldn't be true for a crispy, golden nugget, but it is. The company is also constantly iterating on NUGGS to make them taste better and closer to the "real" thing. 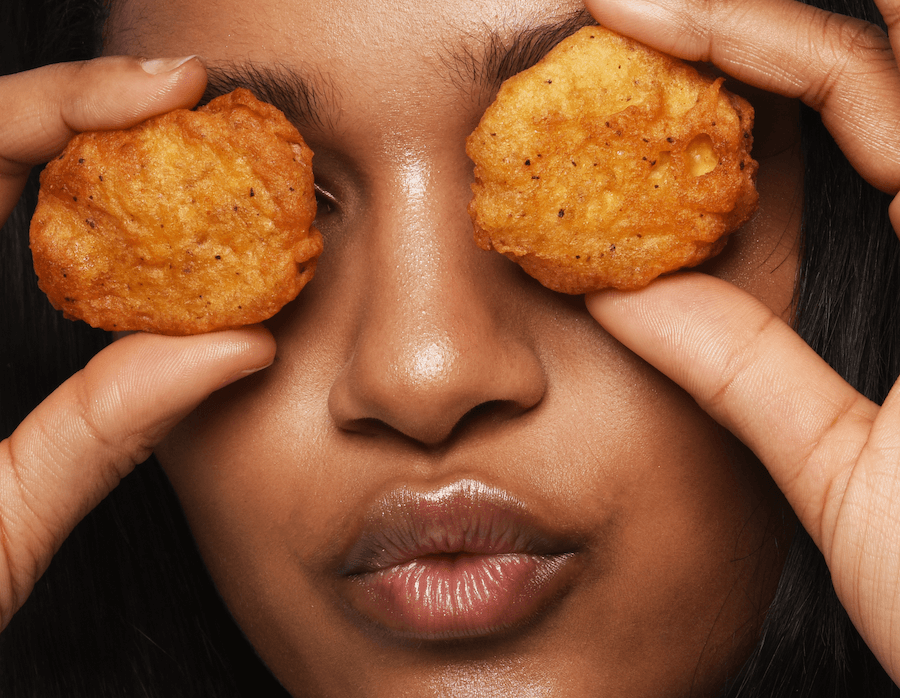 I was sent two boxes of NUGGS—one in their Original flavor and one in SPICY. Each contained 50 nuggets and came in a box with retro boxes, somewhat resembling a puzzle box. I found something about this packaging very inviting, and was instantly excited to dig in.

I very quickly discovered that NUGGS are an air fryer miracle. For one, they actually have air fryer instructions on the box, so I didn't have to turn to an unreliable online calculator to figure out how long to put them in for. Secondly, these nuggets somehow cook at 400° for 10 minutes—the default setting of my air fryer. It's like my fryer knows, and makes it so easy to cook them without thinking twice about it. And lastly, after just 10 minutes, these nuggets come out hot, but not burn-your-mouth hot, with a crispy outside and juicy inside.

Seriously, NUGGS have an amazing texture. The crunch is better than I've ever had with any at-home nuggets, and the "meat" pulls apart like real chicken.

The SPICY NUGGS have exactly the right amount of spice, too. They don't exactly taste hot at first, but they've got a heat that builds in the back of your mouth as you continue eating them. They pair well with a cooling dip, like ranch.

And while I wouldn't say that the "chicken" flavor is identical to a naked nugget made with real chicken, that difference disappears completely when you use a dipping sauce. I don't eat standard nuggets without sauce, anyway, so that wasn't a problem at all in this case. Whether I'm dipping in barbecue sauce or homemade honey mustard or ranch, the flavors match perfectly with the crunch and feel of the nuggets, and I don't miss the fast food stuff at all.

In fact, at one point after I'd started eating NUGGS, my family brought me home a box of McDonald's new Spicy McNuggets to try. I found the flavor bitter, yet underwhelming in the spice department, and I found a gross lump of fat inside of one of them that completely turned me off from the rest of the box. That definitely left me wishing I'd just eaten some NUGGS instead—and I'm very glad I still have plenty left.

If you like plant-based "chicken," you absolutely need to try NUGGS. It's better than the "chicken" I've had at most vegan restaurants, and it's uncannily close to the real thing in turns of both flavor and feel. While I don't think it'll necessarily convert every chicken-lover, I think it'll win over many of them.

And not only is the price right for NUGGS, but they come in huge packs, and they're super satisfying, so they'll last you a while (unless you have a very big, very hungry family). And maybe this is embarrassing, but since my NUGGS samples arrived last Tuesday, my husband and I have had them for lunch on five separate occasions. Maybe we're odd—or maybe NUGGS are really that good.

Love every kind of nugget? Click HERE for our definitive ranking of fast food chicken nuggets.