Olivia Bouler Paints To Save the Birds!

Olivia Bouler is a 14-year-old environmental activist who was just 11 when she raised hundreds of thousands of dollars for the National Audubon Society following the Gulf Coast oil spill. 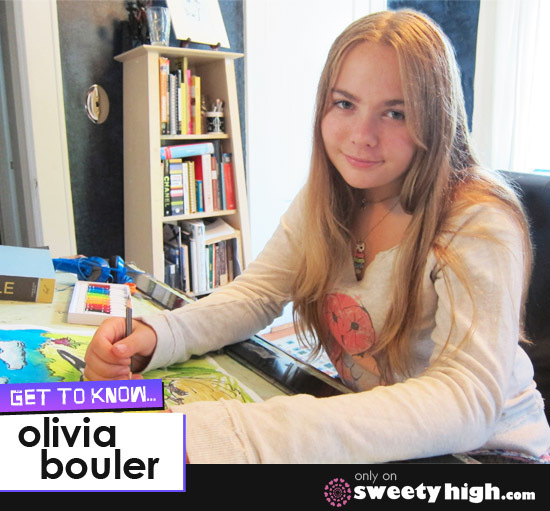 We spoke with Olivia recently about what first drew her to such an important cause, and how her artistic talents have continued to save and research birds!

"I've always loved birds," Olivia told us. "I got my first bird book when I was four and started drawing them in order to learn more about the different species. I love how they are engineered and are so beautiful."

When the Gulf of Mexico oil spill happened in 2010, Olivia heard about it right away because her grandparents live in Alabama and own a beach house. Oil is especially devastating to birds in the water because it ruins their waterproofed feathers. Birds can also ingest the deadly oil.

"I was so upset that I knew I had to do something," she said. "That night I wrote to the Audubon Society suggesting that I donate paintings."

Olivia did 500 original paintings that were sold with all proceeds going toward the Audubon Society.

"People would send my mom a receipt since she didn't want to handle any money," Olivia explained. "I would do a painting for them and she would send it off. I didn't know I was going to do all 500 paintings! Luckily AOL helped out and sent prints for the rest of the donations."

In 2010, Olivia was also involved in Disney's Friends For Change program, where she got to help clean up the Gulf Coast with the Jonas Brothers!

"It was crazy because it was the second day of middle school!" she said. "I had to leave town so that was fun, and everyone was nice to me. They were just regular people. I actually didn't know too much about them when Disney asked us to do the Public Service Announcement with them. I had to buy one of their CDs!"

Olivia assumed that the video was going to be more about the brothers than it would be about her, so she was surprised with the outcome of the shoot!

"I also didn't realize I was going to be the focus of the video, so that was amazing," she said. "They put my hair in braids, which I never do, so not a lot of people recognized me."

Later, a publishing company called the Gryphon Design Collective contacted Olivia and asked if there were any projects she would like to do for kids. Immediately, Olivia thought of a board game.

"We played board games with my little brother Jackson and figured out what we liked and didn't like about the games," Olivia said. "Together we planned the board and I did the paintings for the habitats and the birds. We passed it along to Gryphon who polished it up an tested it out."

She worked with graphic artist Alex Jacobo-Blonder over the summer to develop art for what eventually became the Save the Birds board game.

The Cornell Lab of Ornithology, which is dedicated to studying and conserving birds, also got involved by supplying the bird trivia questions for the game. Olivia decided to donate a portion of the game's proceeds to the lab.

"They do such awesome and important research all over the globe to help birds," Olivia said. "People don't realize that most of their funds come from donations, not the university, so I know they can use as much help as possible."

"The people at Gryphon were so supportive and fun. They were trying to start something good for kids and good for the planet," Olivia said. "They use recycled materials and manufacture locally in Boston, so I was happy to work with them. We had a lot of laughs playing the game together."

Olivia is now a freshman in high school, and has become interested in the education of younger kids in the causes she is passionate about.

"I go to elementary schools to teach about birds and demonstrate drawings," she said. "I really like teaching second grade because they are beginning to see the world around them in a new way."

We asked Olivia if she has a favorite species of bird.

"I met the people who used the money to set up a bird cleaning station in Moss Point, Mississippi," she said. "Bird people are so nice. It's kind of like a big family you become involved in."

In the future, Olivia plans to pursue her passions wherever they might take her.

"I've always wanted to become an ornithologist, but I'm really not sure," Olivia told us. "Ideally I could draw, write, sing, teach, and rehabilitate injured birds."

We hope that those dreams will be able to come true for a girl who has done so much for nature!

What causes do you care about? Join us at Sweety High and let us know what you do to help out!