Olivia Somerlyn is a singer and songwriter originally from San Francisco. We spoke with her on the phone when she was arriving for her first day on her latest tour with Big Time Rush! 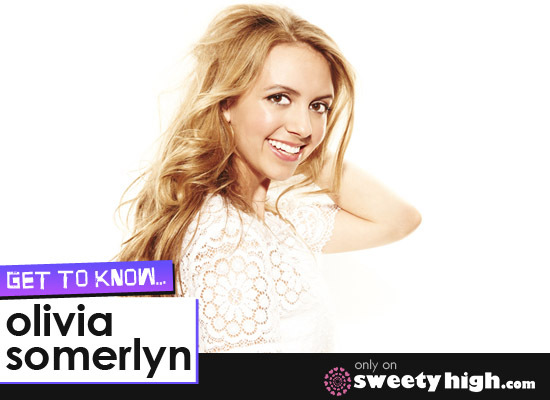 It was a sort of reunion for Olivia, as her first tour ever was the 2013 Summer Break Tour with Big Time Rush and Victoria Justice.

"There are such great memories of my first tour ever and it will always be one of the most special tours to me," she said. "This is kind of like getting to relive it. I'm walking to the venue, and the guys are sound checking. I can't wait to do it all over again."

2013 was a super busy year for Olivia. She also joined The Jonas Brothers during the last three days of their summer tour last year.

"My friends and I were really big Jonas Brothers fans before I was even friends with them," she said. "It was so cool to actually have my friends in the audience and hang out with the band after the show."

She was also a part of a U.K. tour with Jessie J. Olivia said that was a completely different and unreal experience.

"She's such an idol for me," Olivia explained. "She's so talented as a singer, as a songwriter, and as a performer, so it was really inspiring and such a learning experience to actually be able to watch her every night."

Olivia admitted that she was so nervous meeting Jessie J. that she tripped over her chair!

"But she was really sweet," Olivia said. "We talked for a while and she gave me some advice, so it was really unbelievable."

Jessie J. is a huge inspiration to Olivia not only for her music and songwriting, but also for her healthy and positive lifestyle.

"I just feel like I can really relate to that about her and how she interacts with her fans and audience on the stage," she said.

Still, her most memorable touring experience happened on the last day of the Summer Break Tour.

"The Big Time Rush guys all came out on stage with me during my single 'Better with You'" Olivia explained. "They let me use their confetti cannon, and right before the last chorus the confetti went off! It was so unreal and they are so sweet."'

Before she set off on tour with Big Time Break last year, she was contacted by TeenNick.

They gave Olivia her first opportunity on television and made her the Fresh Artist Of the Month for May 2013!

"That was really cool because Cher Lloyd had just done it as well as Little Mix," Olivia said "Four or five episodes aired in the month of May on TV, so every Friday I'd gather around the TV and watch my Twitter blow up."

Olivia's musical influences include not only Jessie J., but also Coldplay and Katy Perry.

"I am really inspired by her attitude and her personality and of course her songs," Olivia said of Perry, "especially the way she's able to have her really upbeat, fun, carefree songs but also some really intimate and melancholy, more thoughtful songs."

Olivia also looks up to her mom for inspiration in the non-musical aspects of her life.

She told us that she tends to write songs on the piano. She says that more melancholy ballads come naturally to her. When she wrote her single "Better With You" she set out to do something different.

"I sat down with a guitar, wanting to write something more fun and upbeat, because my personality isn't really melancholy at all," she said. "I just wanted to write a song about how different people in your life, like your friends, family, even your pets, really make your life better."

To Olivia, the song has come to be about her fans, who are called SomerLovers, or anyone who is in the audience listening to the song.

"I have them sing along there's this 'Yeah, yeah' part that I teach them before I play," she said. "They really make the song so much better and it's so fun to play that song live."

Last year, Olivia was also invited to attend big awards shows including the People's Choice Awards and the American Music Awards, which was her first-ever awards show.

When Olivia and her friend arrived, they were in for a shock when Katy was posing right behind her on the red carpet.

"I'd never seen her in person, never even seen her in concert, and I had to go compose myself and take pictures right next to her," Olivia said. "It's just amazing to be in the room with so many amazing people that I look up to so much and in all these different industries."

She especially loved the People's Choice Awards because she got to meet people in the movie and television industries as well as other musicians.

Celebuzz even named her as one of the best dressed stars at the 2013 American Music Awards!

"It was a very surreal experience to look at a gallery and see 'Best Dressed: Taylor Swift and Olivia Somerlyn,'" she said. "It's funny because that dress is something that I've had for a while, and I didn't decide I was going to wear it until the last minute. I style myself to do those awards shows so it's really nice when it's acknowledged."

Another of Olivia's favorite musical moments was her two nights at the O2 Arena in London.

"It is such a famous venue and it's the biggest one I've ever performed at. There's really nothing quite like it," she said. "I've always visualized that moment since I was younger, I was really fascinated by what that it must feel like to look out at the audience."

At one point in Olivia's onstage performance, she has an instrumental break during a song in which she plays the piano.

"I'm able to take a minute to look out and enjoy the view just looking around, without singing, and that always just takes my breath away," Olivia said. "It's probably my favorite view in the world."

Olivia is also involved with a number of charities. She started working with the United Nation's female empowering campaign Girl Up back home in San Francisco a couple of years ago.

"We were trying to find another another way for me to be involved and it worked out perfectly because Victoria Justice is one of their ambassadors," Olivia explained. "We all went on tour together and it was almost like fate. We all connected together again."

She has also been involved with PAWS, or Pets Are Wonderful Support, which aims to help preserve the bond between hum as and animals.

"They help people who have difficulty taking care of their pets or keeping their pets, whether somebody is elderly or sick or anything else," Olivia explained. "It sounds like it's all about helping the animals but I think it's really about helping people too."

One of Olivia's favorite parts of working with the charity involved dropping of packages of food, treats and toys for pets around the holidays.

She's a firm believer in the healing qualities of pets, especially because of her 20-pound Yorkie named Lukie.

"He's the cutest thing on the planet and he's the thing that I miss most while touring," she said. "There's nothing quite like petting him for a few seconds. It's the biggest relief."

Now, Olivia is about to head to South America on her tour with Big Time Rush and is excited to be able to get back in the studio and write more original music for her fans! We wish her the absolute best for the future!

Curious about the rest of Olivia Somerlyn's musical journey? Make sure to check out her social channels below, and join us at Sweety High for information on how to pursue your own music career!