We're pretty stoked because Team USA is dominating at the 2016 Rio Olympics in Brazil!

It's no secret that our strength is in the water

@kledecky adds another GOLD medal to her collection! #🇺🇸

But, besides all of the superhuman stunts and tricks, there's something else that always catches our eye during the Olympic games and that is… the uniforms! So, we've rounded up a few fun Olympics fashion facts.

Each member of the U.S. Women's gymnastics team gets 12 practice leotards and eight competition leotards, which cost between $700 and $1,200 each. This year, each competition leotard is covered in 5,000 crystals. They're also custom-made and fit for each athlete. 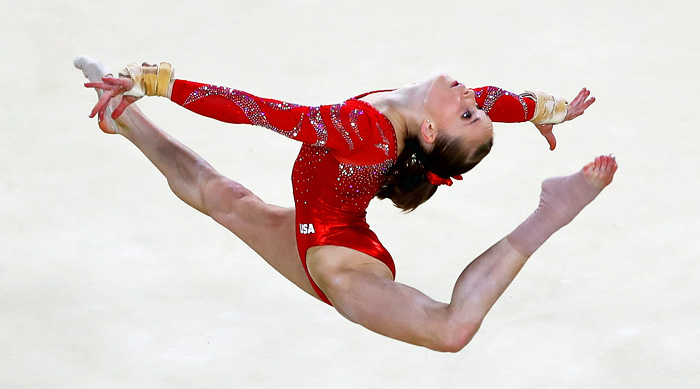 2. You Can Show Your Legs–But Not Your Arms?

At least, when it comes to gymnastics. It's considered unpolished to wear a sleeveless uniform for competition, but there is no rule against covering your legs.

Ralph Lauren is an iconic American designer who epitomizes Americana athleisure. He's most known for his classic polo shirts, and he's the perfect designer to outfit Team USA.

It's no secret that a lot of the clothes we buy are made overseas because of cheaper costs. But, Ralph Lauren wanted to create jobs here at home, and tasked himself with making every single piece and part of the uniforms here in America.

There was a definite star of the show, and for once, we aren't talking about Michael! At the 2016 Opening Ceremony, Michael was not only chosen to carry the flag for Team USA–he also got to wear a custom, light-up jacket with "Team USA" literally lighting up the Opening Ceremony.

#Repost @usaswimming ・・・ Here's what @m_phelps00 will wear tonight to lead out #TeamUSA, including a light-up @poloralphlauren blazer

6. Team USA Isn't the Only Team With a High Brow Uniform Designer

7. At the First Modern Olympics, Athletes Wore Their Own Clothes

The Rings are officially on display in the #Rio2016 Olympic Park! #TeamUSA

Everything from blazers to custom monogrammed polos are up for grabs on RalphLauren.com/TeamUSA.

9. Some Teams Had a Few Fashion Faux Pas

Social media had their fair share of opinions on the Opening Ceremony attire.

And now entering the stadium representing the Nation of Ninja Turtles… #OpeningCeremony pic.twitter.com/H7EWH9v18U

The Cayman Islands athletes know how to do casual Friday right. #OpeningCeremonypic.twitter.com/rji8cjhqa8