I've struggled to get a good night's sleep since grade school, so when I hear about cool new gadgets designed to improve sleep, I jump at the chance to try them.

That's why I've been particularly excited to test out Ōura Ring, a "wellness ring" that analyzes your sleep and physical activity to give recommendations to maximize your health. 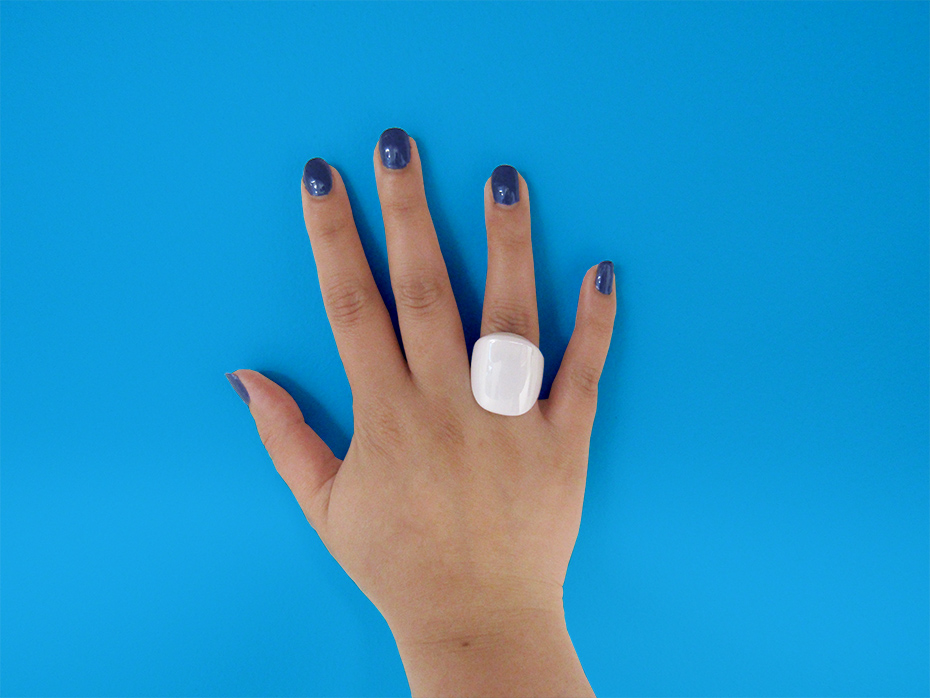 Unlike many other fitness trackers, the tracker comes in the form of a ring rather than a bracelet. According to Ōura, the ring can get much more accurate readings from the pulse in your finger than a traditional fitness bracelet can get from the veins in your wrist.

I'm guessing that one reason ring trackers aren't more common is that the sizing has to be just right. Before I received my actual Ōura Ring, they sent me a sizing kit made up of differently sized plastic rings to find the right fit for me. They recommend wearing it for 24 straight hours to ensure that it's a good fit around the clock. I typically wear a size six, but my Ōura ring is actually a seven, so I was glad I followed their advice. 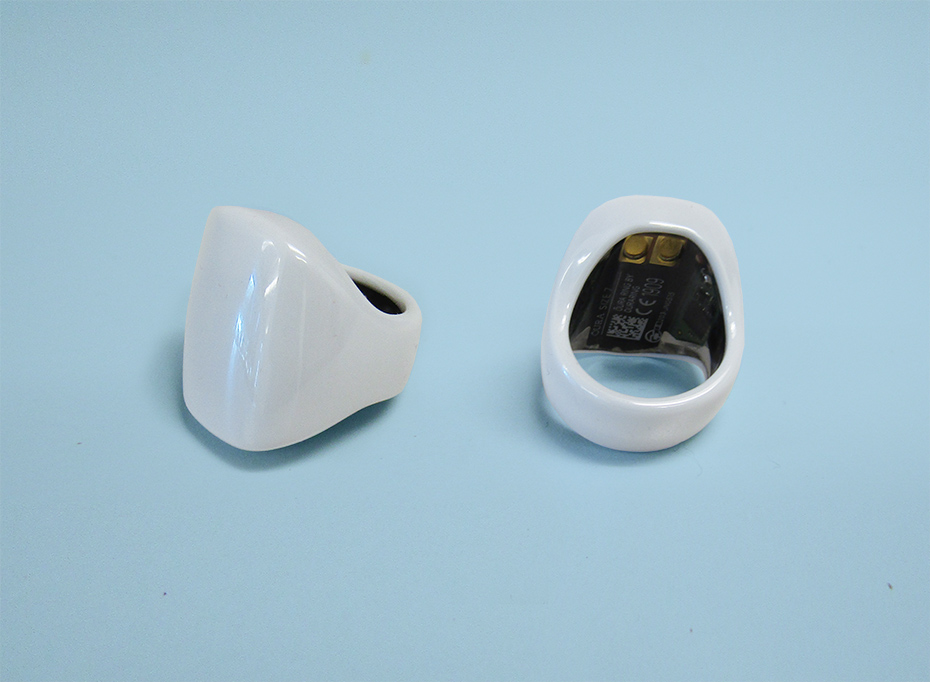 The ring itself doesn't scream "I'm a fitness tracker!" While it is pretty big, it's also cute, and the ceramic finish prevents it from looking like a hunk of cheap plastic. Overall, it looks pretty modern and, in my opinion, pretty fashionable.

And even though you can see the internal circuits through the clear plastic bottom of the ring, it's waterproof up to 50 meters, meaning you can wear it in the shower, bath or pool. At first I felt like I was going to destroy it in the shower, but after about a month of use it still works perfectly, and bathing with it on has become second nature. 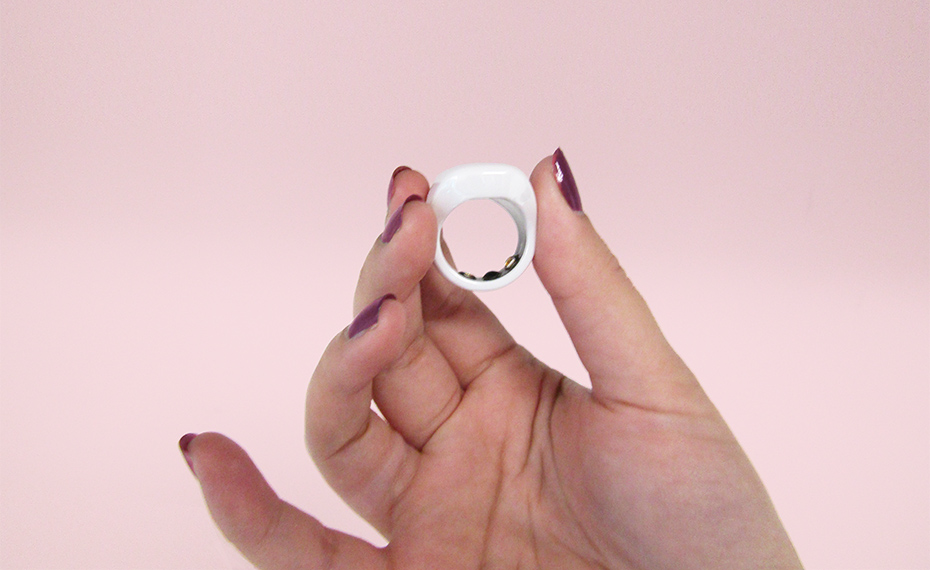 One interesting feature of Ōura, which I hadn't seen anywhere else before, is the "readiness" score. Based on how well you slept the night before, how much exercise you got the previous day and factors like body temperature and resting heart rate, it gives you a rough score to determine which days you should go for heavy workouts and which days you should take it easy. The goal is to strike the perfect balance between the sleep you get at night and the activity you get during the day.

Sometimes when I haven't gotten the best night's sleep, it sets my activity goal lower for the day, recommending I walk about three miles rather than the typical five. When I've gotten a restful sleep, sometimes it recommends goals as high as seven miles. So far this seems pretty accurate, because on the days it tells me to take it easy I'm typically sleepy, grumpy and less alert than the others.

In the morning, the app looks at your previous day, gives a quick analysis on your sleep, activity and readiness and gives tips to improve or maintain your health and get the most out of your day. You can also click on the Sleep, Activity and Readiness areas to get detailed readouts on each one. 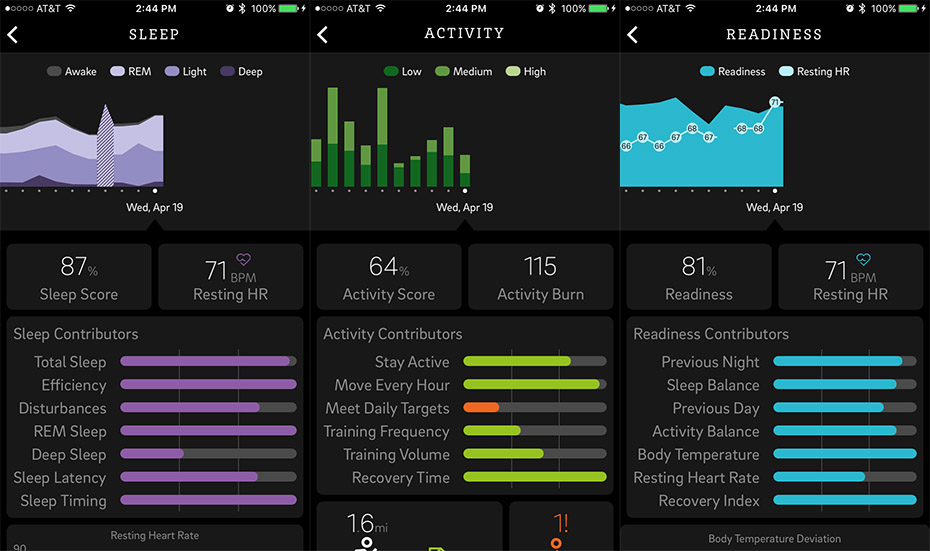 When the contributor bars are the same colors as the graphs above, that's an indicator that your sleep, activity and readiness are in balance. Orange means you should make changes in your habits to improve your score.

According to Ōura, I generally have a problem getting deep sleep (in the Sleep graph above, deep sleep is represented by the dark purple at the very bottom of the graph). The app recommends a few fixes, but I already keep a regular sleep schedule, avoid big meals right before bed and don't drink any caffeine. The one thing I don't do is getting regular physical activity, which you can also see in the Activity graph. It's something I need to work on, but it's tough to fit into my daily schedule. Maybe if the ring keeps nagging me, that's something I'll eventually do.

But I've definitely preferred Ōura as a fitness tracker to simply using the step counter on my phone, since my phone actually misses a lot of walking I do during the day.  I don't typically carry my phone around when I refill my water bottle during the day or use the restroom, and once I'm at home my phone typically stays in the same spot for the rest of the night unless I go out to dinner. Ōura doesn't do a literal step counter—instead it takes any activity during the day, whether it's taking out the trash or running a marathon, and translates it into the equivalent steps based on the number of calories burned.

As a fitness tracker, Ōura does everything I want, and then some. I really love the way it breaks down each component it tracks and explains why it's important, and the daily advice is awesome for pointing me in the right direction. 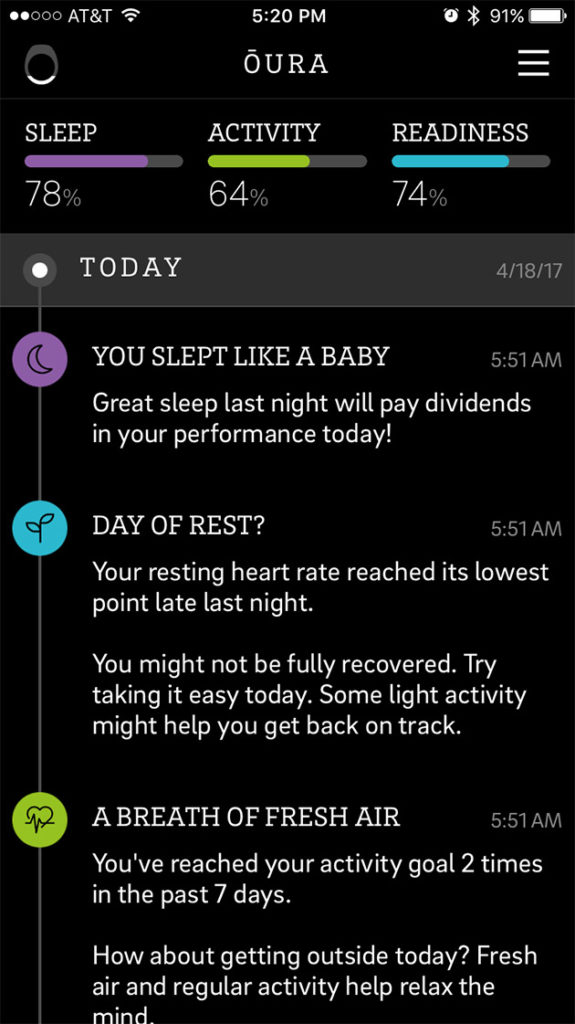 This takes me to the battery life. While Ōura's website states that the ring's charge can last up to three days, I've had to charge it every day for the battery to last through the night—and it may have to do with my weird, restless sleep.

On more than one occasion, I've actually charged the ring to its full capacity just before bed, but spent so much time asleep (10 hours or more) that there wasn't enough juice in the battery to give me an accurate reading in the morning, prompting the ring to go into a power-saving mode to avoid exhausting the battery before I woke up.

Typically, when I've fully charged the battery the night before, there's a about a third of the charge left in the morning. It seems that analyzing sleep is much more intensive than analyzing activity during the day, as the ring has to distinguish between light, REM and deep sleep in addition to tracking your heart rate and when you wake up. Full disclosure—I've been diagnosed with restless leg syndrome, so maybe my tossing and turning during the night are extra draining on the battery. 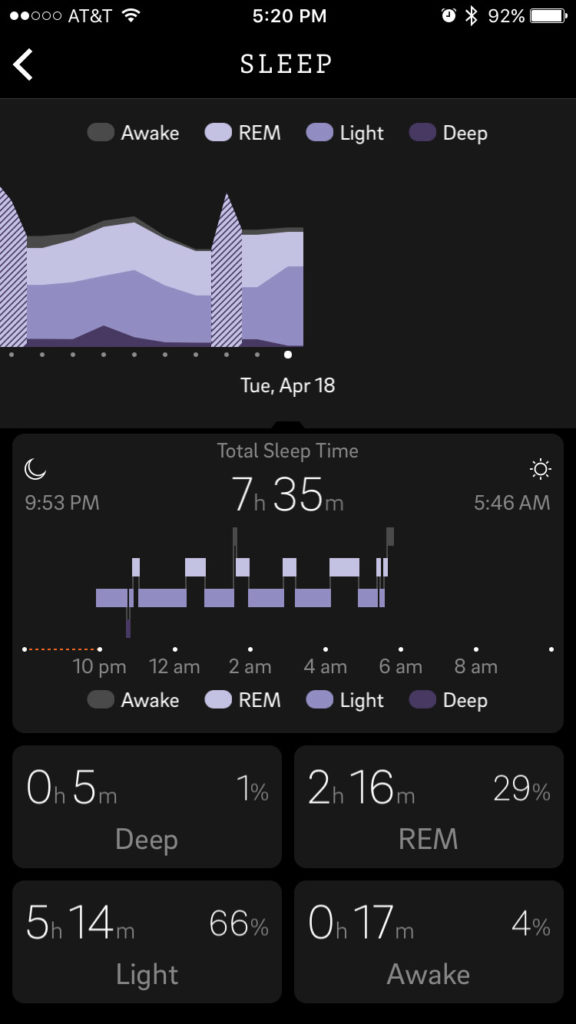 I've seen some other reviews online, and it seems like the battery life varies a lot from person to person. But even if you are getting a full three days of battery from one charge, Ōura still adds yet another gadget to your list of tech that needs charging. If you're the type of person who frequently forgets to keep their phone charged, keeping Ōura charged as well might be a struggle. More than once I've been prepping for bed when I realized the ring still needed charging for the night, but I wasn't willing to delay bedtime for the 30 to 60 minutes it would take to charge.

One plus side of charging? It charges in a special ring box that looks really cool, and while charging, it gives off a yellow glow, so you won't forget to put the ring back on once it's done. 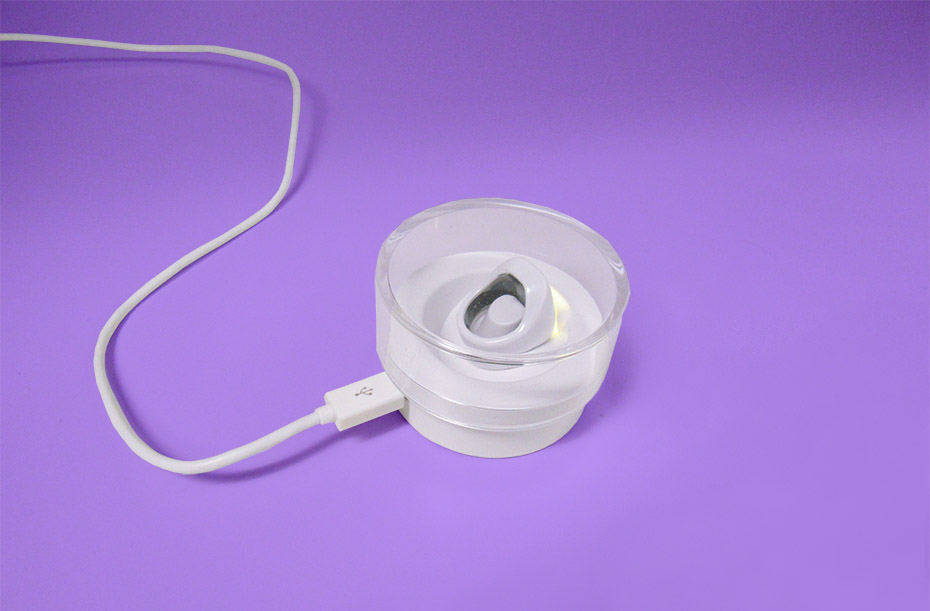 Whether Ōura is worth it for you will depend a lot on how much you care to track sleep and activity, as well as your wallet. At $299 for the Arctic White and Mirror Black options and $499 for the Stealth Black, Ōura is pricier than some of the other fitness tracking options out there.

Still, I think it offers insights that other trackers just aren't providing, since most of them focus on just sleep or just activity, but not both, and certainly not in tandem to then dole out advice for improving them. I personally plan on continuing to wear my Ōura ring for a long time. And who knows—I might even start getting that activity score up.

If you're curious about smart devices that might make you healthier, click HERE to read our review of the smart water bottle, Hidrate.