P1Harmony Strives to Create Unity on HARMONY : SET IN

When you listen to P1Harmony speak, you can feel a palpable excitement and genuine love for the work they do. They're eager to be a part of every step in their music-making process: they write their own lyrics, compose their own songs and create the storyline for each of their albums. The best part of all? We're only at the very beginning of their career.

On Nov. 30, the K-pop group released the second mini-album in their Harmony series, Set In. The newest project features six bold tracks, and the lead single, "Back Down," is all about their commitment to fearlessly defying the odds. Next year, the guys will commence a headlining tour in the United States and Seoul to promote the new music.

We had the chance to sit down with the sextet to discuss their newest album. Continue reading to hear more about how P1Harmony is working towards a more united society, their inspiration for the album's message and their hopes and dreams for their future. 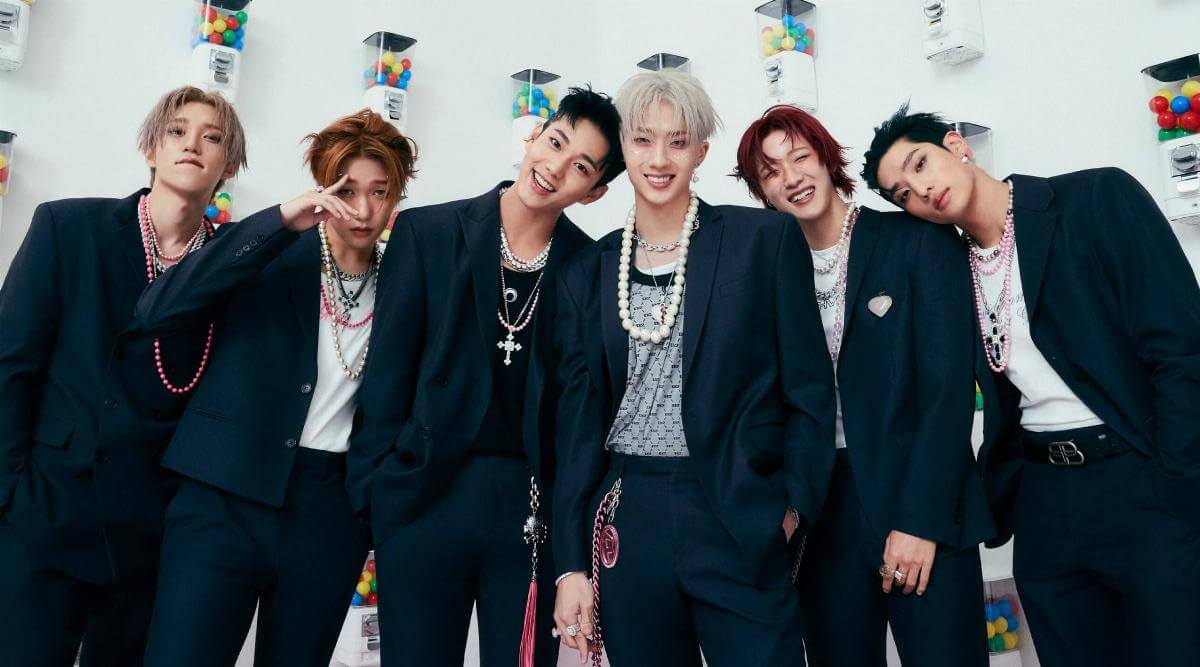 Sweety High: HARMONY : SET IN will be the second addition to the Harmony mini-albums. What does this chapter add to the story you're telling?

Keeho: The Harmony series is all about us going into the world and becoming superheroes who figure out the disharmonies in society. We want to fight social injustices and whatever we feel keeps us contain or prevents us from being ourselves. We've finally created a new world where we can be confident and love ourselves.

In this album, we wanted to talk about friendship and the conflict within it. Now that we are in this new world, we are trying to create perfect harmony within our group. There might be conflict in friendships, but we want to highlight the point that it's okay to have different opinions and thoughts. At the end of the day, all that matters is that you can unite to become one.

SH: There's a variety of genres explored on this mini-album. You have rap-heavy tracks "Back Down" and "Secret Sauce," but also soft-pop ballads like "Better Together." Is there a genre from this project that resonates most with you?

Jongseob: Personally, I enjoyed working on "Look At Me Now." We've never tried a mixture of rock and hip-hop. It was fun to experiment with songwriting on that track. But, I also feel like "Back Down" suits me best.

SH: Are there any other genres you still want to try in P1Harmony?

Keeho: I've always wanted to do New Jersey club music. That would be really fun. I also want to try Latin music.

Intak: These days, I've been wanting to try drill.

Keeho: Drill's nice too. I think that would be fun.

SH: The message of "Back Down" is to keep moving forward without backing down from fear. What are some moments in your life that inspired this mantra?

Keeho: I think starting a big journey would be the best thing we can use as an example, especially with our jobs. There's no guarantee of success. It's not just a 9 to 5 where you work and know you'll get paid. That's not guaranteed for us.

We kind of risked our childhood, our youth … going to school and then university—what people would call the "regular" route. I think we took a leap of faith to do something we truly enjoy and love, which is singing, dancing and rapping. The whole message of "Back Down" is, if you really love something and want to stand for it, you shouldn't back down. You should be able to express yourself however you want to.

SH: In the music video for "Back Down," each member gains superpowers. Can you talk more about the significance of the abilities, and how it relates to the theme of the Harmony series?

Keeho: (Laughs.) There's not a deep meaning to the superpowers. The whole music video is very comedic. A comic story is the kind of vibe we were going for. We thought it would be funny to be like, "Oh my God. We just got electrocuted, and now we have superpowers."

SH: At the end of the video, it's open-ended as to what happens after pressing the button. Will this storyline be further explored in a future release?

Jongseob: I created the "Harmony Protocol" button. If you press it, it starts a journey to finding complete harmony. At the start of the music video, we were split into groups, with some of us saying, "Don't press the button. We don't know what will happen." The rest of us were like, "Let's just take the risk." In the end, we finally came to an agreement to press the button.

Either in our next music video or album, we will talk about how that perfect harmony will be made and how our friendship will continue. It will all definitely connect. 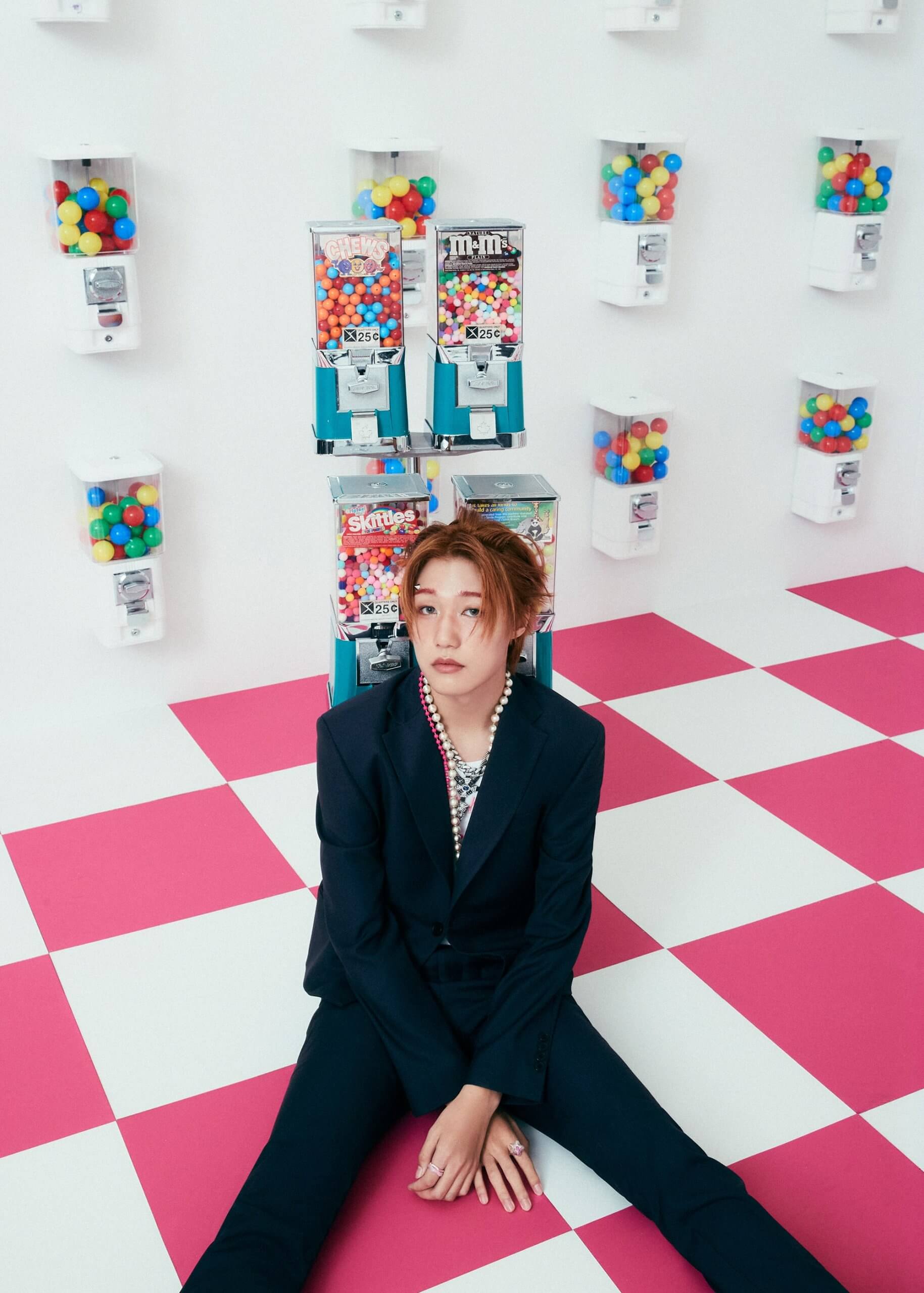 SH: Intak and Jongseob, you're both credited with creating the story for P1Harmony. Can you talk more about your involvement during this release? How did you come up with the concept?

Jongseob: Intak and I are both rappers in the group. In this album, we participated a lot in writing our own lyrics for the songs. We tried to express the vibe that the song was giving. For example, "Back Down" is really strong and all about being confident. So, we wanted to be more direct and aggressive in our songwriting.

In a ballad like "Better Together," which is about friendship, I wanted it to feel like a hug. It's about understanding and realizing that we are better together. I tried to express everything more explicitly through my lyrics.

SH: Jiung, you also have a credit as a songwriting and composer on "Better Together." Did you experience any challenges while composing the song? Where did you get the inspiration for the lyrics?

Jiung: I actually didn't feel like I had any challenges while writing "Better Together." I created my own movie in my mind and got inspired by that. Really, it was inspired by my own friendships. It turned out great. It's such an honor to have the opportunity to compose and write lyrics for our group.

SH: Earlier this year, you went on your first tour. Are there any lessons you learned that you hope to take with you on this upcoming tour?

Jiung: It was hard to maintain the condition of our voices, bodies and energy. It can be difficult because we just move, move, move. I think we got better at maintaining our condition. We learned how to express our energy more and pump up the crowds. It's going to be better. It'll be really fun. We're excited about the upcoming tour. 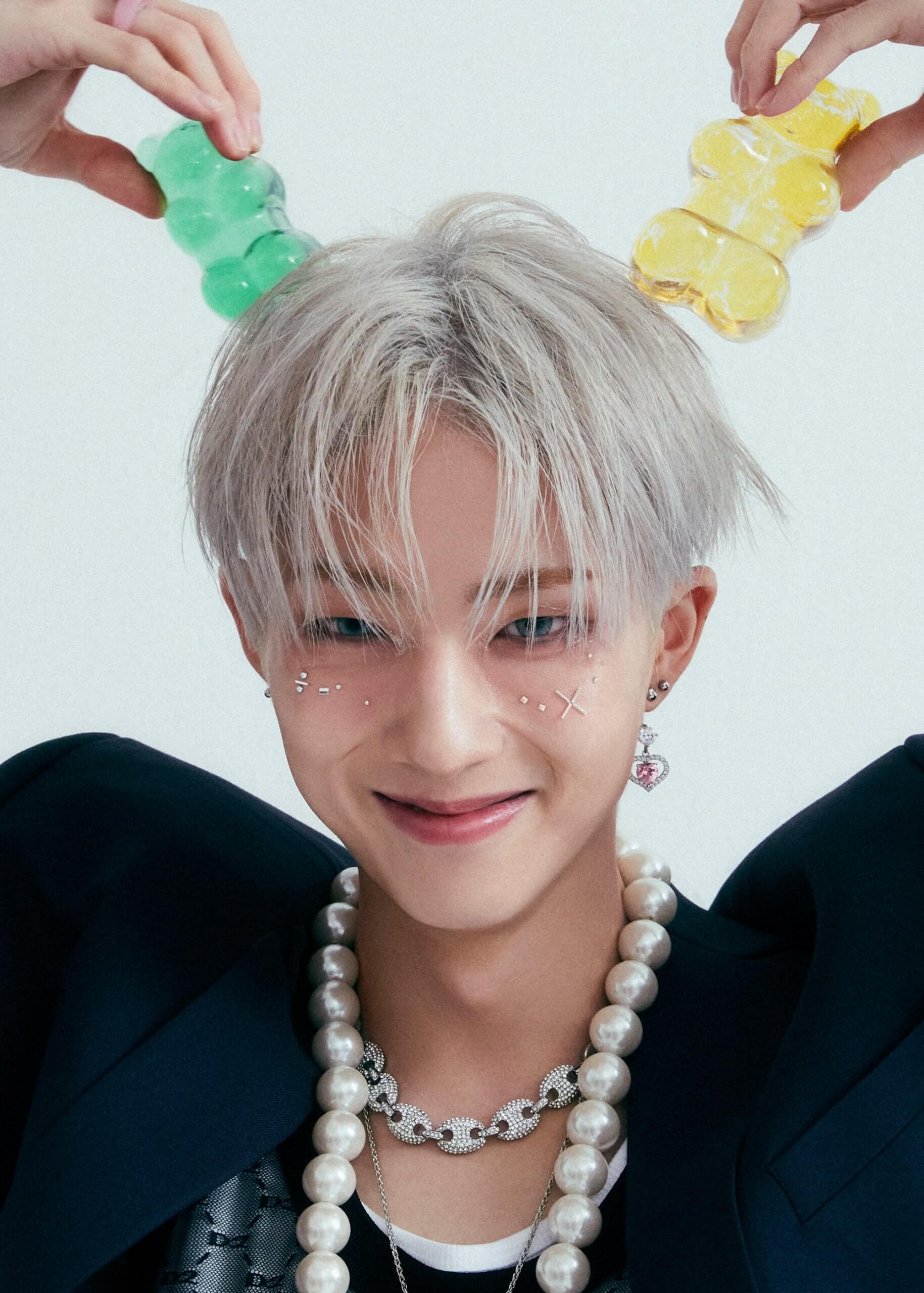 SH: How will this tour differ from the last one?

Intak: We don't want to spoil anything, but look forward to seeing new sides of us. We're trying to experiment and test our limits to see what we can do. It's definitely going to be a lot different.

Keeho: Our first tour wasn't like a tour tour. It felt more like a fan meeting. We just wanted to meet everyone since we haven't been able to for so long because of COVID. It was more about seeing as many people as possible. If the first tour was a cute, little fan meeting—maybe a level 10—then the upcoming tour will be a level 50.

Jiung: 50, yes! As I said before, we learned how to express our energy better than ever. I think our fans will enjoy our shows even more. I hope they'll like it.

SH: In 2021, P1Harmony was listed as one of Time and Billboard Korea's best rookie groups. Do you ever feel a sense of pressure when releasing new music after having such a successful breakout year?

Jiung: It was a huge honor to be mentioned by Time and Billboard. We were so excited, but I also think we tried to remain calm. Stay calm and keep doing what we want to do. Of course, there is pressure, but it makes us more disciplined.

Keeho: Definitely. We can't lie and say there's no pressure because the industry is filled with so many talented groups and people. We try to stay on our feet and always show better, newer sides of us, so there's a freshness to our music for every comeback.

I think what Jiung said is very important. We don't try to feel that pressure because, at the end of the day, what's most genuine to us is that we like to perform and make music. We try not to have a burden that strays us away from what we want to do. If you don't really love what you're doing, it's hard to be confident. You have to balance those burdens. 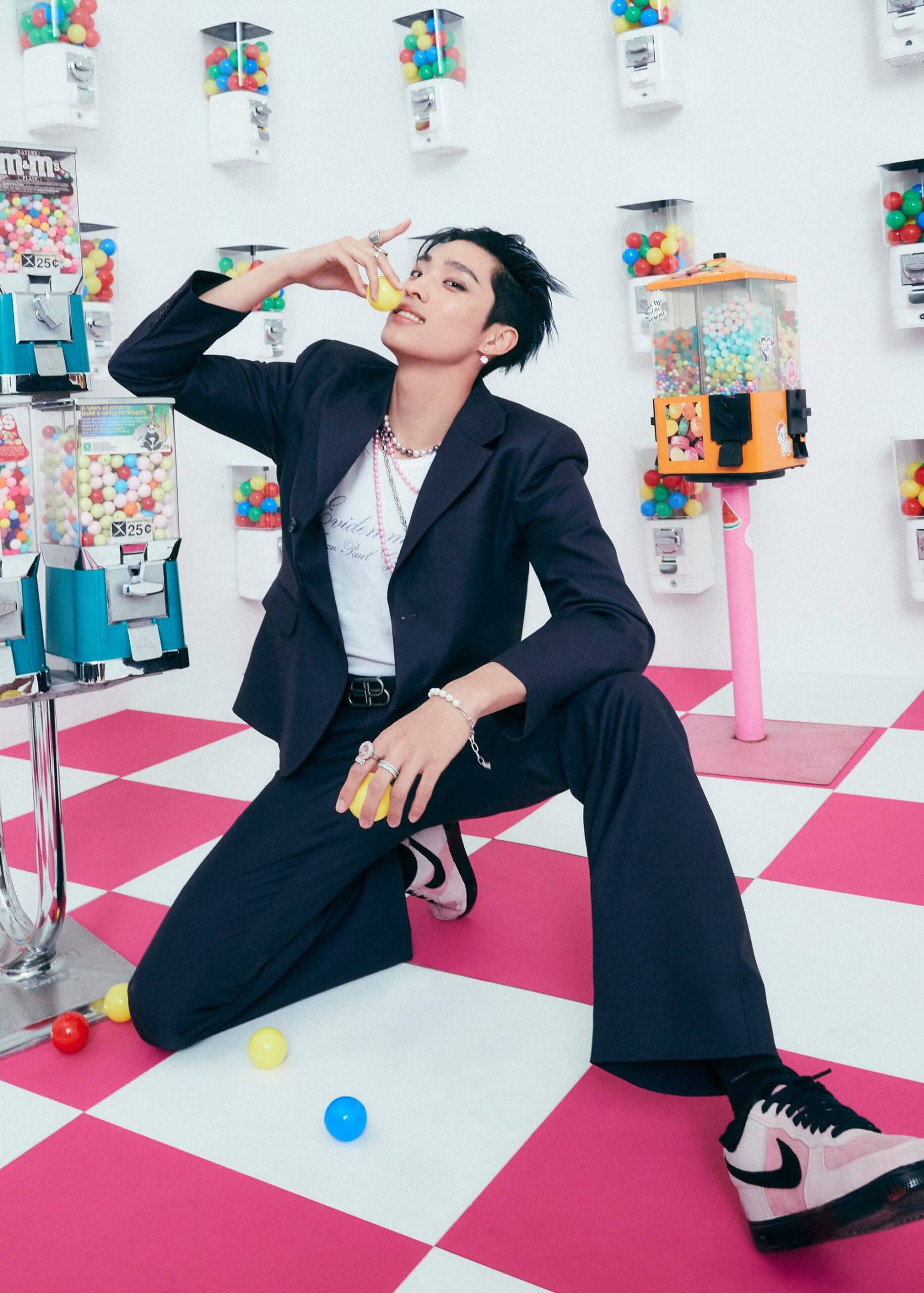 SH: What other goals do you hope to achieve together as P1Harmony?

Jongseob: Perform a lot. And on bigger stages.

Keeho: I feel like we really love performing. We can have the hardest day ever preparing for music. But, as soon as we get on stage, it's so worth it. We definitely want to perform on bigger stages. Maybe perform at the Super Bowl. You gotta dream big. Super Bowl, Coachella—you know? We want to perform at big award shows as well. We have so much to show and so much potential that hasn't been let out yet. Hopefully, as time goes on, we'll be able to express that more to the public.

Jiung: Hopefully, we can hold our own concert at the biggest stadium in the world.

Keeho: It hasn't been that long since we came out with a new album. It's been four months since our last one. Hopefully, our fans like it. We spent a lot of time on it and worked really hard to perfect it. We hope you guys like "Back Down," and we hopefully will see you again soon in a city near you.

Can't wait to see the group perform? P1Harmony will kick off the P1ONEER tour on Jan. 14 in Seoul, and conclude on Feb. 16 in Dallas. Tickets are available now through Ticketmaster and AXS. VIP packages can be purchased through Wonderwall's website. 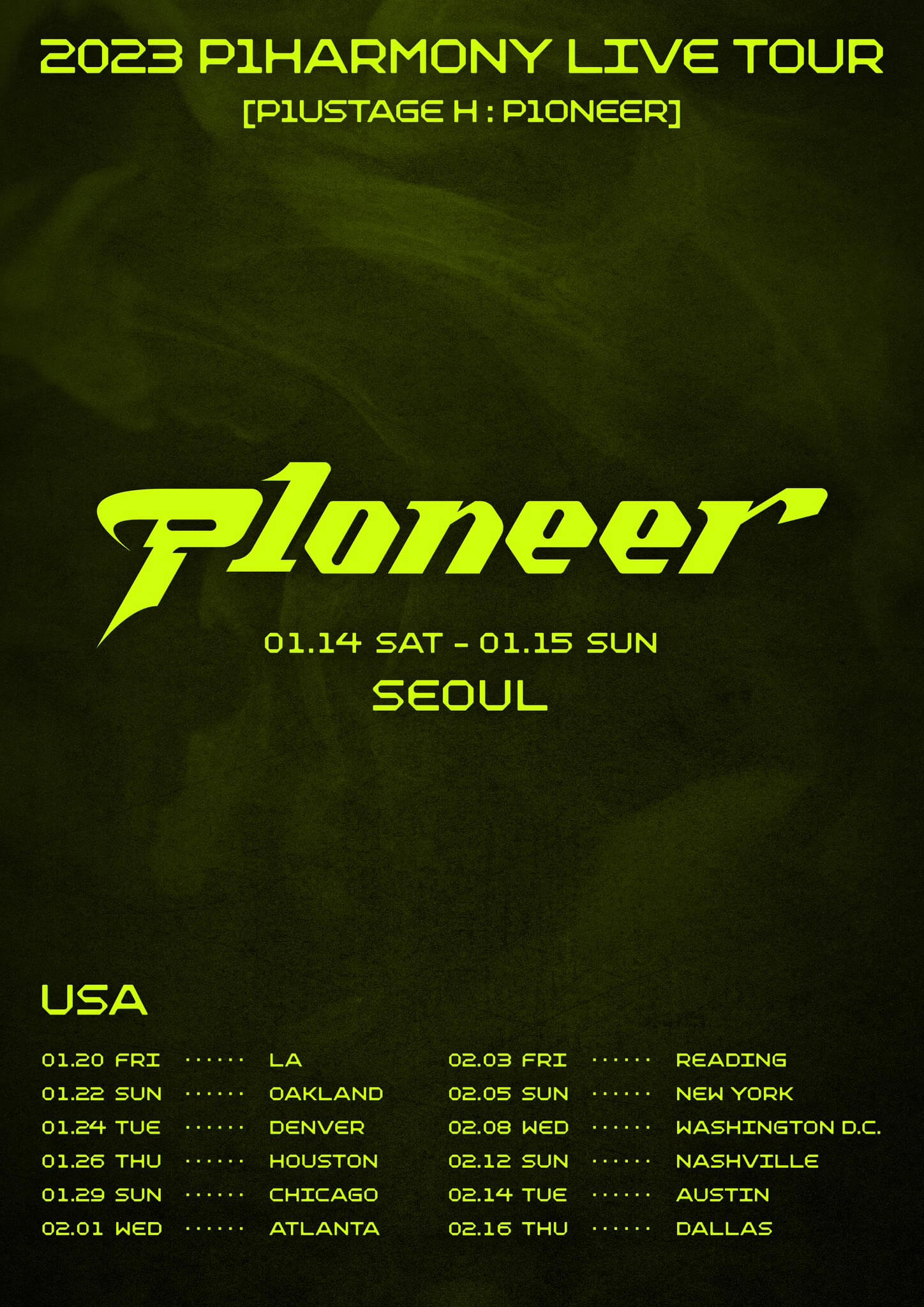 For more on all things K-pop, click HERE to read our interview with VERIVERY on their single album, Liminality — EP.LOVE.