Love Beef Jerky, But Want to Cut Down on Your Meat-Eating? Try Pan's Mushroom Jerky

I've always had a big thing for jerky.

When I was in third grade, the No. 1 thing on my holiday wish list was a food dehydrator, because all I wanted in the world was to have an endless supply of beef jerky at my fingertips. My dad would regularly take me to the convenience store to pick out a jerky slab or stick as a treat, and I'd save up to take home a couple of bags of fancy, expensive jerky from the county fair every year.

All these years later, I still crave the treat often, but as I'm trying to eat less beef, I don't indulge myself so often. I hadn't even considered meatless options until I stumbled upon Pan's Mushroom Jerky. Curious, I simply had to reach out to the company, who were generous enough to send me samples of each of their four mushroom jerky flavors. How would mushroom jerky compare to the "real" deal? I had to put it to the taste to find out.

Pan's Mushroom Jerky was inspired by a family recipe discovered by Michael Pan during a trip to visit relatives in Malaysia. Enamored with the delicious, meat-like vegetarian snack, he knew he had to share it, and eventually crafted the plant-based mushroom jerky brand that's available in more than 350 stores across the U.S.

The mushroom jerky is made with shiitake mushrooms because of their meaty texture and savory, meat-like umami taste. Pan's Mushroom Jerky is certified paleo and vegan, and is free of gluten and soy. It's also rich in fibers, as well as vitamin D. It's available in four flavors (Original, Salt and Pepper, Applewood BBQ and Zesty Thai) and sells in some stores, as well as online for $9 per 2.2 oz. bag, or in a $35 variety pack featuring bags of all four flavors. Their online store also offers free shipping on orders over $25.

When my Pan's Mushroom Jerky arrived, I was eager to dig into the Original flavor to see what the brand was all about. It only took one bite to be sold on it. Just like with regular beef jerky, the pieces inside were of varying size and shapes, and the 2.2 oz. bag was more sizable that it sounded at first.

The texture, while not exactly like beef jerky, melded well with the taste, and I had a hard time believing the recipe lacked soy because this Original variety has a slightly sweet, teriyaki-like flavor. The only ingredients are the mushrooms, water, avocado oil, coconut sugar, salt and chia seeds, meaning it must be the natural flavor of the mushroom and the sugar that produces the teriyaki effect. It was delicious, and I was more than ready to see how mushroom jerky would taste with extra flavors thrown in. 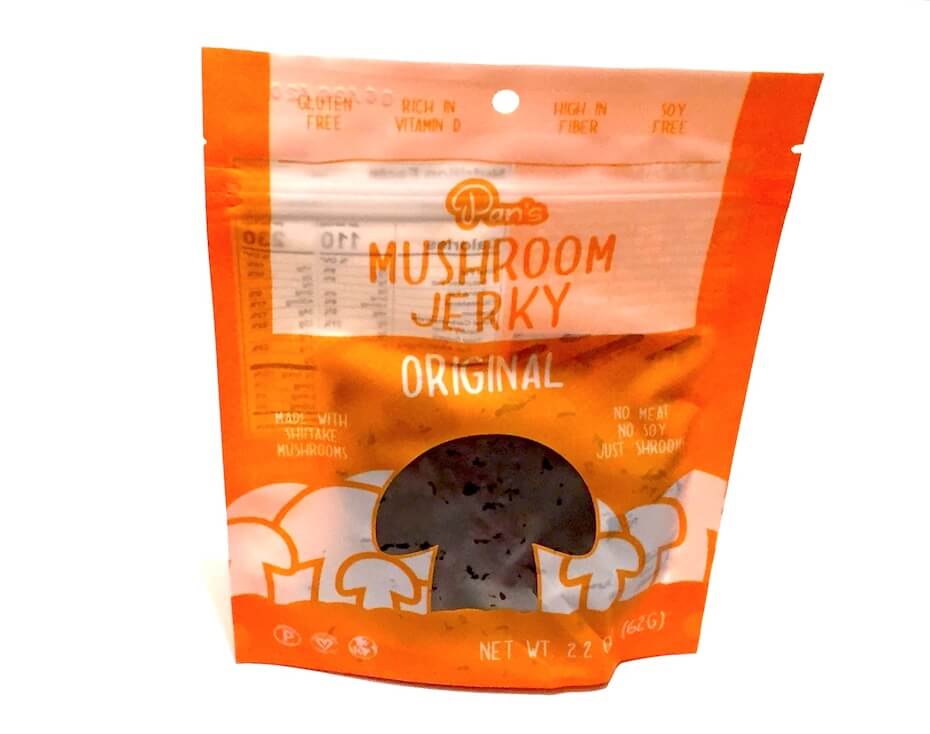 The Salt and Pepper had the same delightful texture as the original, but it immediately became clear that this flavor was all about the black pepper. That's the only additional ingredient to this flavor, but it brings out an entirely different quality to the essence of the jerky. It's sharp and lasting, changing the effect of the sweetness and lingering in the mouth long after you've swallowed. It's a flavor for pepper-lovers—and I happen to be one. 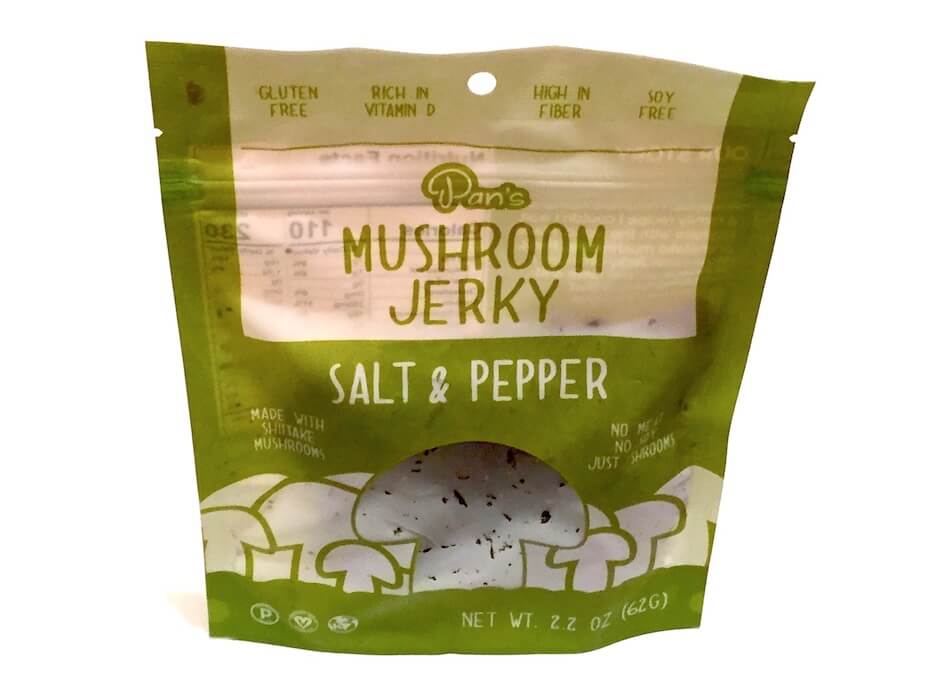 The Applewood BBQ flavor of Pan's Mushroom Jerky has the most going on in terms of flavor, and that can be a bit hit-and-miss. This one adds smoked paprika, chili pepper, vinegar, black pepper, garlic, onion and cayenne on to the original recipe for a burst of savory heat. I expected to like it more than I did, and found that the smokey barbecue flavors didn't match as well with the innate mushroom jerky taste as the others. Still, that's just my personal taste, and I can still see it being a fan favorite. 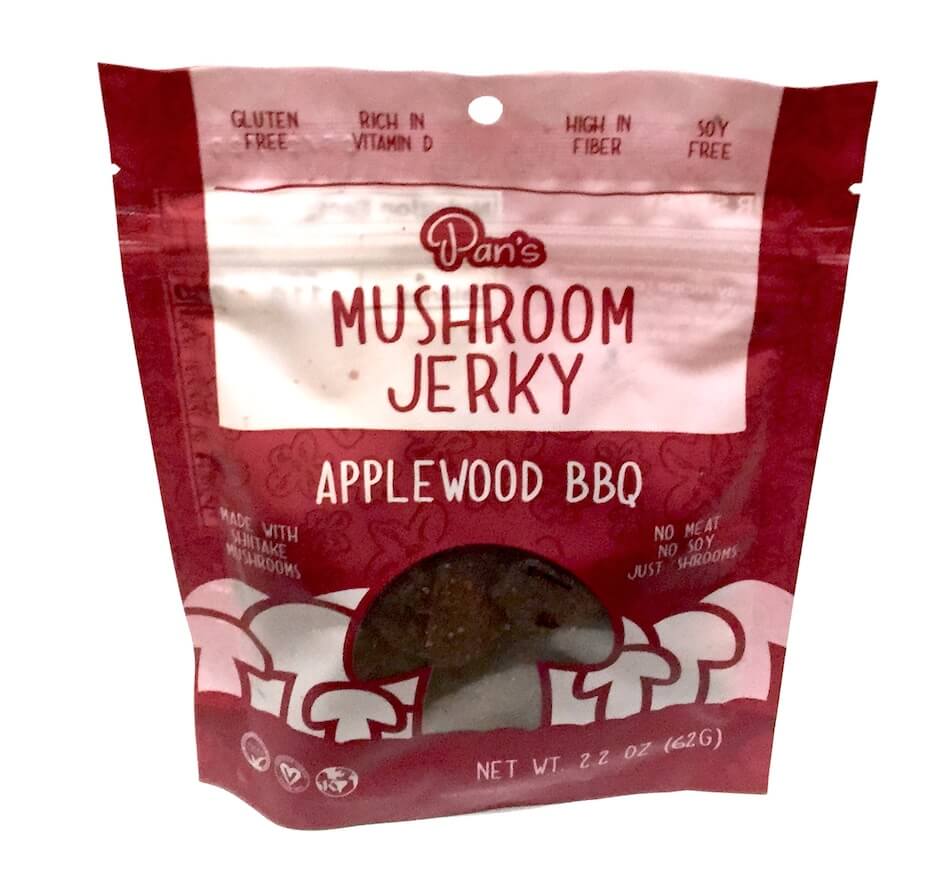 Asian-inspired jerky flavors have always been my favorites, so I had to save the Zesty Thai for last. I was thrilled that I did. Zesty Thai added garlic, onion, lemon peel, cayenne, tomato powder, coriander, paprika, basil, black pepper, cilantro and white pepper to the original recipe, and while that might sound like a lot of ingredients, they all blend together seamlessly to make one deliciously sweet and bright flavor that elevates everything about the mushroom jerky itself. It's my favorite by far—and was also the first to disappear. 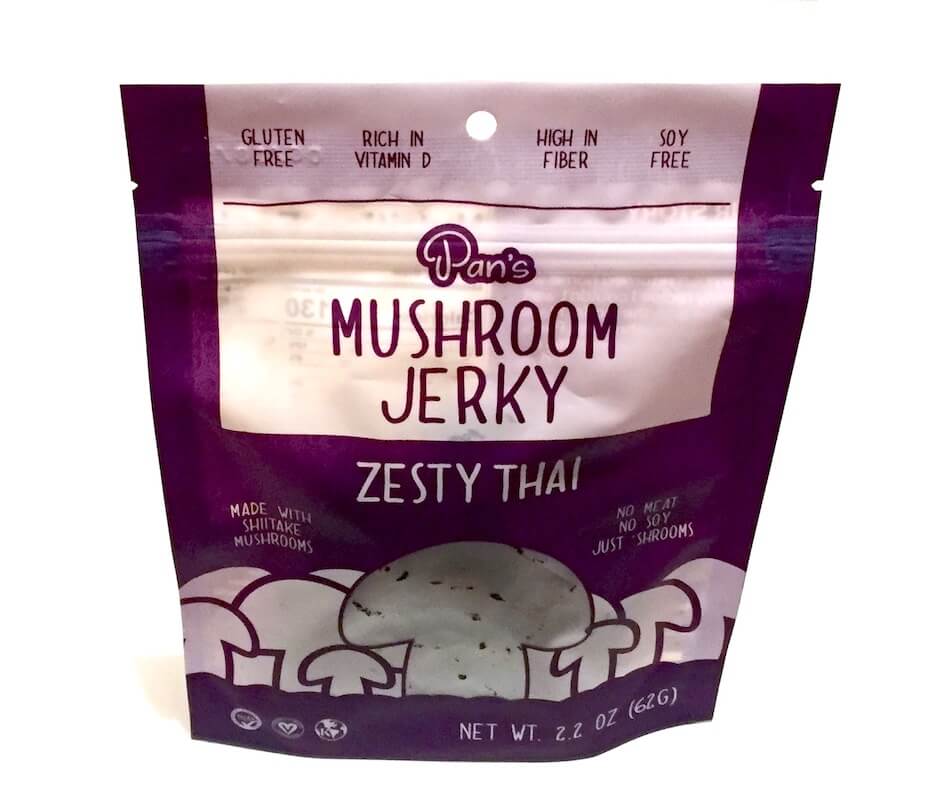 Pan's Mushroom Jerky won't make me swear off traditional beef jerky forever, but it's an awesome substitute with great flavor and texture that might soothe cravings for even the most voracious carnivore. The four different flavors also offer something a little bit different for every kind of eater.

And while $9 is a little pricey for a 2.2 oz. bag, premium brands of classic beef jerky can be just as expensive, making it a great alternative. I also live in a pretty remote area and rarely have nearby access to the products I review, but seeing as Pan's Mushroom Jerky is made and manufactured in the Pacific Northwest, shops near me actually sell it! Click HERE to find out if Pan's Mushroom Jerky is sold in stores near you.

Trying to cut out meat and animal products? Click HERE for a list of the foods we bet you didn't know were vegan.