Paris Smith On The Premiere Of Every Witch Way Season 3!

Paris Smith is an actress, singer and dancer best known for her role as Maddie Van Pelt on Nickelodeon's Every Witch Way. The third season of the show premieres tonight on Nickelodeon, and we spoke to Paris to get the inside scoop! 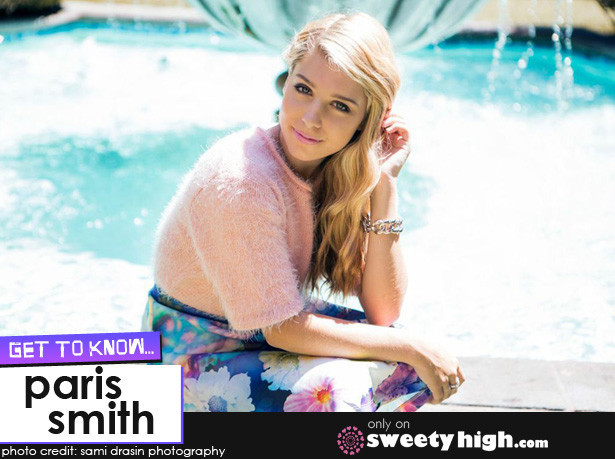 14-year-old Paris Smith has quite an impressive resume! On top of starring in Every Witch Way, she appears alongside stars including Lia Marie Johnson and Bethany Mota on Nickelodeon's React To That, based on the Fine Brothers' "Kids React" series.

She's also a singer and songwriter with singles "He Says," "Game Over," and "Crush On Hollywood" on iTunes, as well as a dancer with an independent dance company.

The Every Witch Way cast and crew recently wrapped filming the show's third season, which premieres tonight at 7pm!

"I was definitely drawn to Maddie the minute I read her role because she's so funny and so complex," Paris explained. "She's a fashionista and she's the popular cheerleader girl. Every girl wants to play that role."

But Maddie is about a lot more than sass. She's also a witch with magic powers.

"I love all the effects and messy spills," Paris said. "There's definitely a lot of messy stuff that goes on onset. Maddie can be a little mean, but I don't think she doesn't intend to be that way. I think that's just how she comes across sometimes."

Playing the "mean girl" Maddie has been a stretch for Paris, but she said she's happy to take on the challenge.

"I filmed it with Daniela Nieves, who plays Andi, and she is so much fun to work with," she said. "Maddie's character has really developed and I love and feel so honored to be part of that process."

Unlike many other shows for kids, Every Witch Way airs Monday through Friday nights during its month-long run.

"It's definitely fun," Paris said. "We don't have a laugh track, as well, which is something different from other shows on Nickelodeon. It was a new experience for all of the cast members and crew and for the fans as well. In season one I was thinking like 'Are they going to like me? How's it going to be?'"

Fans have been eager to embrace the show's unique format.

"When it airs, it's like a soap opera," she said. "I call it a soap opera because it's comedy, but it has its dramatic elements. I guess you could call it a dramedy. I love the format because I wish my favorite shows aired Monday through Friday. I want to see the next episode the next day. I don't want to have wait a week to see it."

Paris has been thrilled that everyone watching the show has enjoyed watching it as much as she's loving creating it.

"I'm so glad they love it and I'm so glad they support us," Paris said. "I love my fans with all my heart. I'm so close with them and I just love talking to them and tweeting them and hearing their stories and giving them advice."

She explained that there's a lot to look forward to in tonight's new season!

"If I had to put it in one word, I'd say the third season has a lot of drama," she said. "We also have a new location this season, the Beachside 7."

At the Beachside 7, Diego's the manager, Gigi and Emma are waitresses, and Daniel's a lifeguard. It's also where Maddie, Andi and the dancers go to hang out.

"It's basically the center of everybody's social lives during the end of summer," she explained. "But Jax isn't there. He's in Rebel Boot Camp, because he got a little bit too rebellious with his powers."

"Mia is a big old trouble maker," Paris said. "She loves to stir the pot, getting involved with Daniel and Emma a little bit, and Emma is not liking that. You can expect to see a lot more mischievousness and there's lots and lots of magic."

Do you plan to tune in and catch Every Witch Way every weeknight this month? Comment below with your thoughts and be sure to join our community at Sweety High to dish on your favorite EWW news!