Penguins Of Madagascar is a new game for Wii, Wii U and Nintendo 3DS, based on the DreamWorks Animation film of the same name, that puts you in control of penguins Skipper, Kowalski, Rico and Private to stop the villainous octopus, Dave! We played the Nintendo 3DS version and loved every minute! 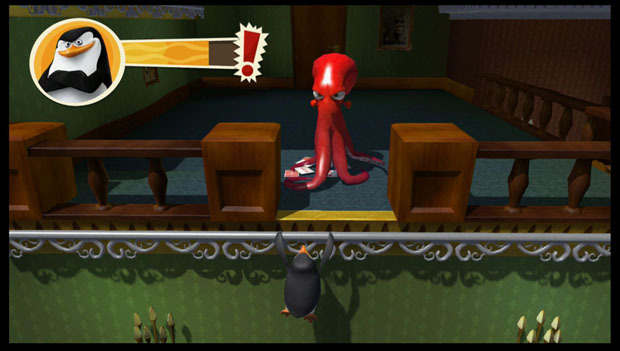 The game begins on the idyllic Tiki Island, where the penguins are planning a birthday party for Private. In celebration, they decide to embark on a mission to raid Fort Knox for their favorite snack, Cheezy Dibbles!

But before they do, they make sure their bodies and minds are prepared, putting players through a tutorial that shows them the ropes, teaching you most of the moves you'll need throughout the penguin adventure.

Once the penguins arrive in Fort Knox, the game gets tough fast! As you move through the levels, you must collect Cheezy Dibbles while evading sight of evil octopus guards. You soon discover they work for the villainous, Dave, who's been kidnapping penguins and must be stopped!

Throughout the levels, you'll traverse lasers and electricity and avoid being seen by spotlights and security cameras. Players must also swap between the four penguin protagonists to utilize different specialized skills. Private can enter pipes to travel between areas, while Kowalski is a hacker and Rico is a demolitions expert.

As much of the game revolves around sneaking and espionage, it can sometimes get stressful. Get spotted, and you have to escape the line of vision fast before you set off the alarm!

Throughout the game you'll also be headed to a casino in Monte Carlo, New York City International Airport, and of course, Dave's secret laboratory!

Penguins Of Madagascar is a ton of fun, with a plot that's the perfect companion to the spy elements of the film. It's absolutely packed with action, but also forces you to think to cleverly outwit the octopus bad guys.

You'll also face a couple of mini games when you play as Kowalski and Rico. Kowalski's computer hacking involved a simple game with turning pieces, and Rico must play a Simon-like game before setting off bombs. Though neither of these games is much of a challenge, they're a fun change of pace to the normal gameplay.

The game also features a lot of fantastic dialogue that feels like it's pulled right from the Madagascar movies, though it would be an even better experience if they'd gotten some actors to voice the characters. Fans of the Madagascar series won't be able to put the game down until they finish it!