As a two-time winner of Dancing with the Stars, Peta Murgatroyd is known around the world for her unparalleled talents as a dancer, but in 2022, she's also been making a name for herself as a powerful entrepreneur.

The TV personality is also a beauty mogul, using her own career-long experience with self-tanners to build her own ideal brand in collaboration with South Seas, Peta Jane Beauty. Known for its phenomenal bronzing oils and tanning mists for every occasion, the brand launched just this year and has already received a New You Media Beauty Award for Best Self Tanner. We got the chance to chat with Peta about everything from being a global dance superstar to what goes into running her own business, and how she balances being a mom on top of all of it.

1. Peta is a self-professed self-tanning queen, but for the longest time, she just wasn't getting what she needed out of the existing brands—so she created her own.

"I've been doing this for so long, and I've tried hundreds of different brands on my body from the age of 16 onwards. Whether you're in competitive dancing, have a theatrical career on Broadway, or you're on something like Dancing With the Stars, everyone self-tans. I couldn't really find a product that would look amazing both on the stage and also in real life. That was my dilemma, because I'd always go out the next day looking a little orange, and a little patchy, smelly and scaly looking—all the things you don't want. Or the tan would look great when you put it on inside, but wouldn't look great in the sunlight. I wanted to create a line for the everyday person. I wear my self-tanning products on stage, but I can also wear them going out to the post office and not look super orange and weird. I wanted it to be accessible for everybody. I have the know-how. I have the knowledge of years of trying products. I finally bit the bullet and made the decision to create my own, and I'm so happy I did."

2. It was a big decision for Peta to put her own name on the brand.

"I felt like it had a nice ring to it, but it is kind of a daunting thing putting your name on a bottle. If people don't like the product, if it doesn't sell well, if it doesn't do what it says it's going to do, that can hurt your brand, as well as your name. Still, I thought having my name there was a necessary decision, because I know the product and that it does what it says it's going to do. I fully believe in it."

3. From the beginning, there was a list of bullet points about what Peta Jane had to be.

"There are no orange undertones or overtones the next day. It dries pretty much instantly, so within minutes, you can put your clothes on. That was so key for me, because I don't have time to waste standing around for an hour, and it still being tacky when I got dressed. It also had to have a good smell. Those self-tanning smells can be so putrid sometimes, so my product needed to be masked with something that actually smells good when you put it on your body.

We accomplished all of that. My mission statement for the brand is 'Good skin is always in.' Whether you have tanning lotion on or not, especially on your face, good skin is the most beautiful thing you can wear."

4. The best advice she's incorporated into her life over the years is to always trust her intuition.

"Trust your gut and the first decision to come to mind. I learned that by building Peta Jane. I didn't trust myself in my early years and didn't have the confidence to go full steam ahead and put my name on the bottle. I wish I did, and that I'd listened to myself. On one shoulder was the angel telling me I could do it, and on the other one was complete doubt, and failure. Who would buy my tanning products? Those were the statements in my head. It wasn't until my later 20s that I realized I really do have the knowledge about products, especially tanning products, that I could really fill the everyday person in on the secrets to having a great tan. Once I rolled with that, and once I believed in myself, I feel like everything just came together."

5. She also believes blocking out the noise is critical while you're building success.

"There are going to be a lot of opinions coming at you from all different directions, especially if you've brought a few different people into your company or your close circle. I definitely listened to too many opinions when I was younger. If I'd just listened to myself and been more confident in what I knew that I knew, then this process would have started a long time ago. But, especially with social media nowadays, the hate and the trolls are so rampant, and you really have to block out all of the noise and keep going with blinders on, like a horse."

6. Having a very regimented schedule is one of the biggest secrets to her success.

"I keep a diary and keep my phone so close to me—which is dangerous, sometimes—but I have to have everything mapped out in my day. Especially because I have a son. I'm dropping him off, picking him up from school. Is he going to tennis today? Soccer? All of these different things come into play. It's definitely not just having fun and testing tanning products! A life schedule as a mother is complicated, sometimes. You have to be able to juggle multiple things at once. We have a whiteboard up with everything my husband, Maks [Chmerkovskiy] is doing as well that can coincide with me. He travels a lot more than I do right now. We have a family planning schedule, and that really helps me."

7. Looking for a flawless self-tan? Peta has some top tips coming from years of experience.

"Exfoliating your skin the night before or the morning of your self-tan really lifts up dead skin cells, especially where it's really dry, on the elbows, knees and ankles. I wouldn't use a very oily exfoliator, though, because the oil can leave a layer, and then the tan can't actually penetrate the skin properly. Then, I would moisturize those areas again. Also, give special attention to your knuckles. I'm sure you've seen people with orange hands! That area can be very dry, so you need to be sure to put some sort of moisture on it to shield it."

8. The brand also has their Peta Jane Bronzing Mitt to up your self-tan game.

"It's such a game-changer when you put on our of our mousses. It's so soft and velvety, and it really just makes the tan glide on perfectly smooth. It's so easy to use it's fool-proof. It's like a buffer, so it makes everything blur out, without any harsh lines. I love this thing!" 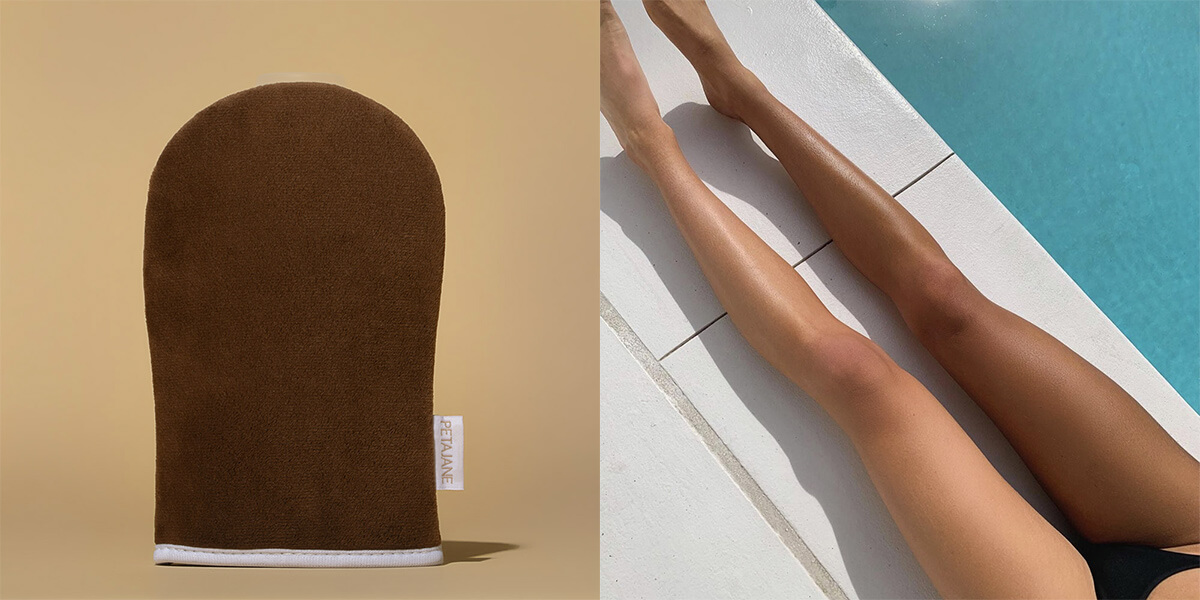 9. She says the most rewarding thing about her entrepreneurial pursuits has been learning about business.

"It's learning how to run it, and building it from the ground up, managing day-to-day things with accounting, finances, with photo shoots. It's pushing out different products, as well, and learning social media tactics with what people want to see, and learning with your customers. There's so much that goes into it, and it's never just testing new colors. It's getting into the labs and making sure you know the ingredients going into everything, and understanding what each of them does. I pride myself in this, because it's quite a simple formula. I wanted them to be free of overwhelming scents and oils. So many tanning products have various oil extracts in them, and I really didn't want that at all. I wanted it to be really plain, really simple, and have one nice scent in there, which would help the smell."

10. You might not guess it, but Peta is a tomboy at heart.

"I grew up with one brother. I'm a girl's girl, but I also very much like to rough and tough, and get in there with the dudes. That's a part of my personality that people don't see much, because they see the glamorous Peta onstage with sparkly sequins. All in all, I'd much rather prefer to walk around in sweats and flip-flops."

Love learning the stories behind the founders? Click HERE to find out all about Yasmin Maya and Birdy Lashes.