I Wore a 'Natural Frequency Technology' Sleep Bracelet—Here's What Happened

I've tried pretty much every remedy under the sun to fall asleep faster, and to get a deeper, more restful night's sleep.

To improve my sleep hygiene I've started putting my phone away an hour before bed, wearing blue light glasses and even using a weighted blanket—and though these things help, I still don't think I'm getting that peaceful slumber everyone else seems to enjoy.

So when I heard about the Philip Stein Sleep Bracelet Nano, which is said to use "Natural Frequency Technology" to aid with rest, I was curious if not a little skeptical. The folks behind the sleep bracelet generously provided me one for review, and while I still have some questions about the unique accessory, I have no immediate plans to ditch it, either.

Philip Stein's Sleep Bracelet Nano is a wearable device designed to improve the sleep of the wearer in order to help them catch Zzzs faster and wake up feeling more refreshed in the morning. According to the company, our brains and nervous systems undergo electric activity that produces a field of bio-magnetism around our bodies. They say external magnetic fields from electronics and other sources can interfere with our natural magnetism, which can have a negative impact on health.

However, Philip Stein asserts that natural frequencies can help reinforce our innate magnetic fields, which is why their products are embedded with special Natural Frequency Technology to do just that by replicating the positive benefits of the Earth's frequencies. They say that the frequencies of the bracelet are specifically tailored to help the body get deep, restful and uninterrupted sleep in order to help wearers wake up feeling totally renewed.

The Sleep Bracelet Nano consists of a breathable and hypoallergenic purple band holding a metal disc embedded with Natural Frequency Technology. It's not an electronic device, so it has no batteries that need to be charged or replaced. If you don't have any problems with sleep, Philip Stein also offers wellness and sports bracelets, as well as timepieces that serve as watches, but also offering the company's Natural Frequency Technology.

The bracelet sells for $199, but fortunately, if you don't see your sleep improve after using it, you can easily return it using their 60-day money-back guarantee. 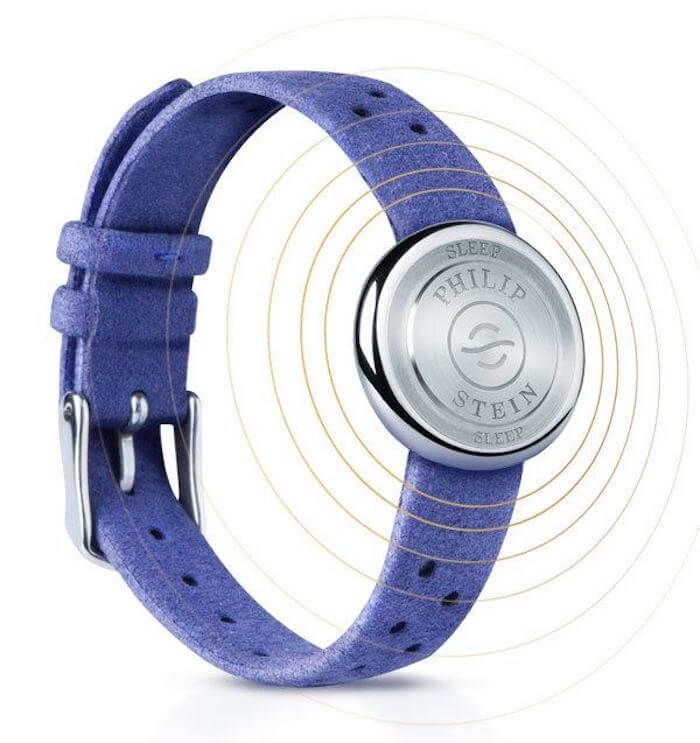 I must admit I had to read up on the Sleep Bracelet Nano quite a bit before I truly understood how it supposedly works and what should be happening when I wear it. I found the online instructions to be more specific and helpful than the info contained in the little booklet that came with the bracelet itself.

First, I learned that I might not feel the full benefits of the Philip Stein Sleep Bracelet Nano until after 30 nights of consecutive use. Secondly, I discovered that I should put the bracelet on 15 – 30 minutes before going to sleep. I wore the bracelet to bed for the first time on Sept. 18, so I marked Oct. 18 on my calendar and did my best to stick to my nighttime sleep bracelet routine.

My first thought upon putting the bracelet on for the first time was that it was oddly comfy. I anticipated it might be slightly awkward to wear a bracelet to sleep each night, but the soft material made that a non-issue. I was also a bit surprised to find that once I put it on, within about 20 minutes, I would start feeling pretty drowsy. Over time, I found that when I give in and go to bed when those feelings hit, I fall asleep a lot faster than if I worked through the sleepiness until bedtime and then put my head down to rest. 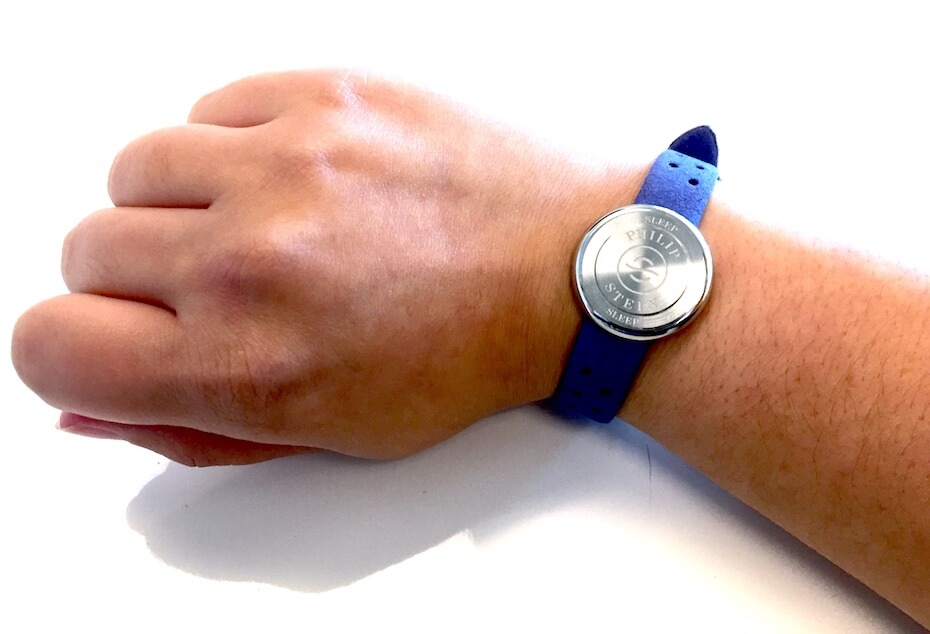 During that time, I felt like the quality of my sleep was a mixed bag. Some nights, I was able to knock out a lot faster than is typical for me. During a couple of nights, though, I had some of the worst insomnia I've had all year. Most mornings I felt pretty groggy when I woke up, but that's typical for me. However, I felt that the number of good mornings I had was slightly above average.

Throughout the month, I also found that my dreams were particularly vivid and realistic, and that I was able to recall most of the details about them when I woke up. This caught my attention, as I often lose my dreams as soon as I open my eyes, particularly if I don't write them down immediately. My dreams were also mostly pleasant, though I didn't always wake from them feeling like I'd slept well.

While I tried to stick to 30 nights straight of wearing the Sleep Bracelet Nano, I did slip up on a couple of occasions. There were a few nights early on in the month during which I forgot to put the bracelet on before bed because I hadn't firmly established it into my sleep routine yet. After all, it's not the most natural part of a bedtime regimen. But I soon found that if I'd remembered to wear my watch during the day, taking that off and replacing it with the sleep bracelet at bedtime was a lot simpler. In the mornings, there were also a couple of times I accidentally took the bracelet into the shower with me—not that water should damage it, at all.

Occasionally, I'd put the bracelet on earlier than usual, simply because I'd already gotten into my pajamas and I didn't want to forget to wear it to sleep. When this happened, I felt myself getting sleepier earlier, but sometimes I wasn't ready to go to bed when I felt tired, and ignoring those feelings made it tougher to sleep when it finally was time for sleep.

Night 30 was Friday, Oct. 18, so I was interested in what my quality of sleep would look like that night. Maybe I overslept both days, but I actually wound up feeling pretty crummy on both Saturday and Sunday morning, even canceling plans I'd had for Saturday because I wasn't feeling well enough. It might have been the dry, hot weather, but I simply didn't sleep well.

However, when I woke up this Monday morning at 6:30 a.m., I felt better rested than I have in a long, long time. Maybe I've finally accumulated 30 nights wearing the watch, or maybe it's a coincidence. Since I'm seeing positive effects—small as they might be—I'm definitely going to keep up the habit and see where it takes me.

While I do believe I've seen a positive effect from wearing the Philip Stein Sleep Bracelet Nano, it's difficult to measure and quantify my quality of sleep. When I slept well, it was impossible to say whether the bracelet could get all the credit. When I slept poorly, I didn't know whether the bracelet hasn't fully reset my frequencies yet, if I'd done something else to throw off my sleep-wake cycle, or if the bracelet simply wasn't working. I also don't see good science backing Natural Frequency Technology as the real deal, so I'm not sure whether it really worked on me or if my brain convinced me it did.

What I do like about the bracelet is if it doesn't work out after your first month and a half, the company will happily refund you. $199 can be a good chunk of change, but it's not too much to pay for better sleep. The benefit you get from the bracelet will likely vary from mine, whether that means it makes a marked improvement to your sleep right away, or doesn't work for you at all. Either way, I'm going to keep wearing mine. 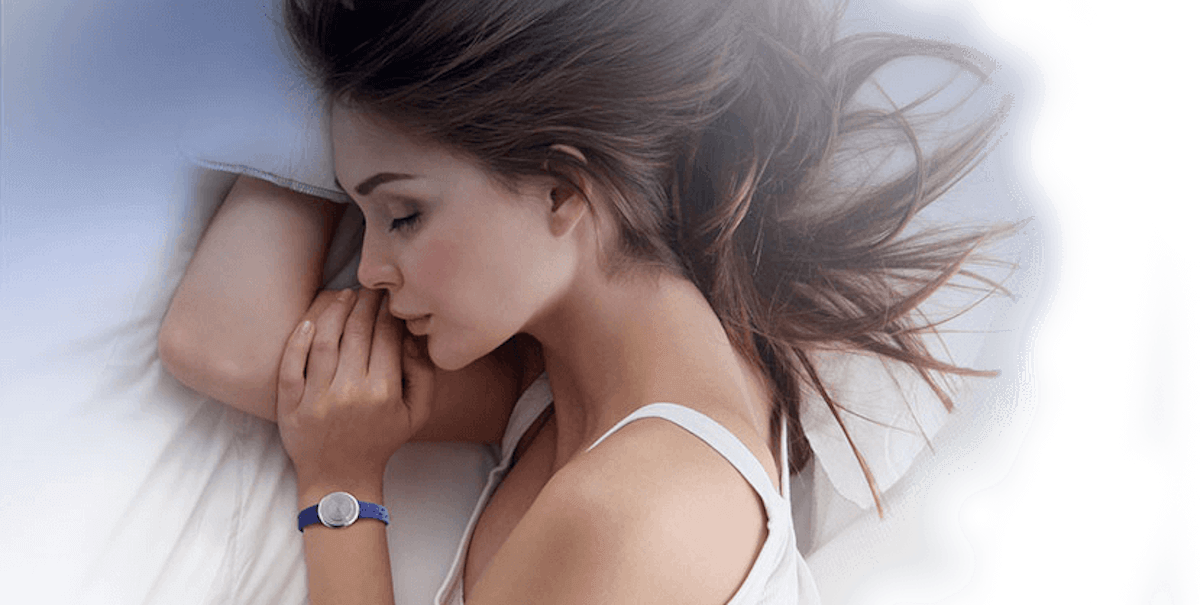 Sleep affects all aspects of your life. Click HERE to find out why your sleeping habits may be causing acne.