Pheonix Wright: Ace Attorney – Spirit of Justice for the Nintendo 3DS is the sixth game in the Ace Attorney series, and even 15 years after the first game's release, it's proof that the folks over at Capcom still know how to innovate. 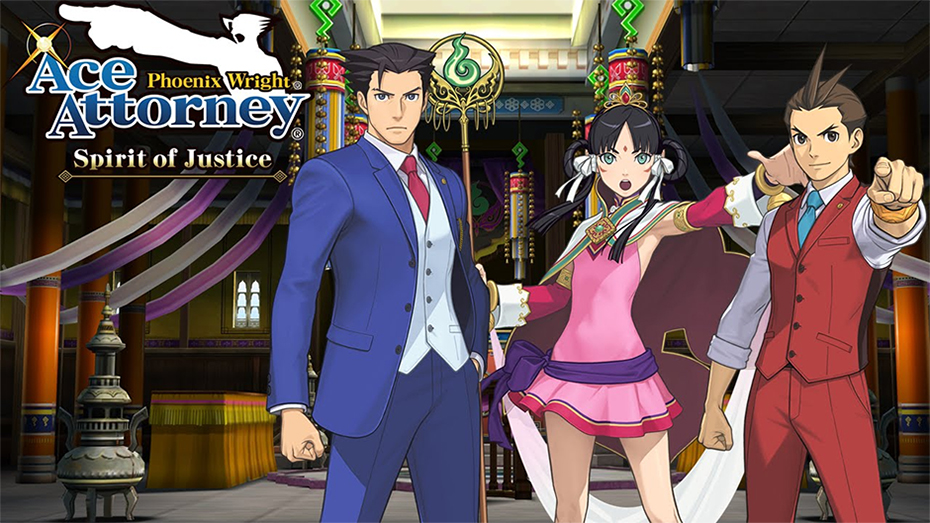 The game begins with our hero, defense attorney Phoenix Wright, traveling to the faraway kingdom of Khura'in to visit his former assistant, Maya Fey. She's been there for two years honing her skills as a spirit medium.

In Khura'in, Phoenix meets up with a young boy named Ahlbi Ur'gaid, who gives him a tour of the kingdom.

But, in true Phoenix Wright fashion, it's not long before the 9-year-old is accused of murder. The game quickly takes off in a big way, as Phoenix immediately agrees to defend him in court. 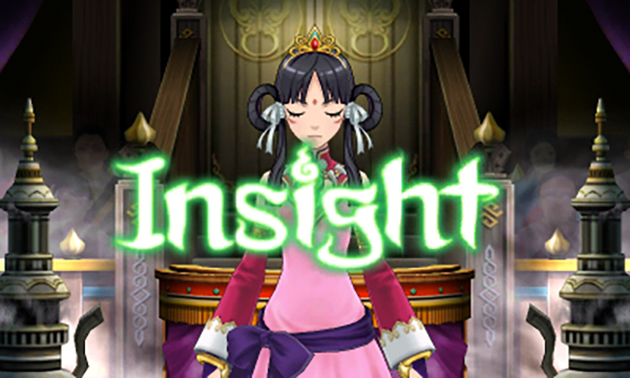 And trials in Khura'in aren't at all like they are in the states. First off, they begin with the princess, Rayfa Padma Khura'in, performing a "divination seance."

Using her mystical abilities, Rayfa can show the court precisely what the victim saw, smelled, felt and heard in the moments before their death. Then, using her insights, she walks the judge and jury through the events to explain why the defendant is guilty. 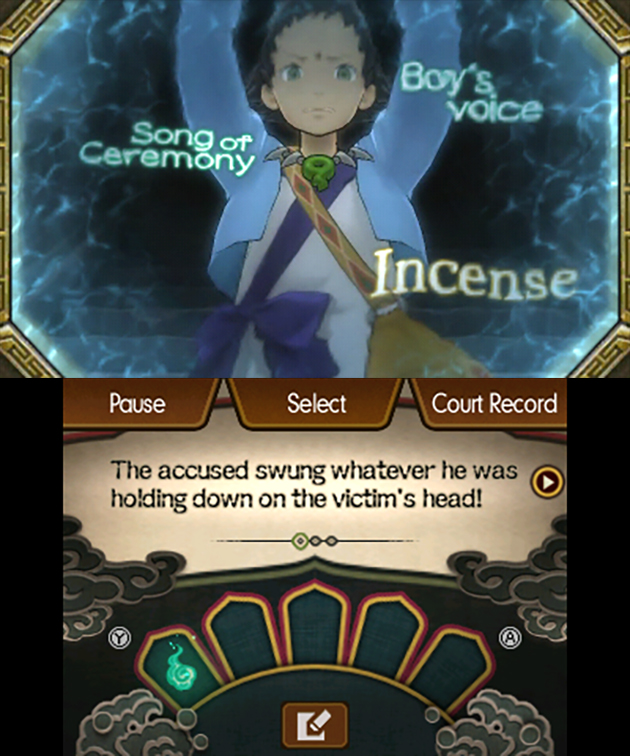 As the player, it's up to you to guide Phoenix Wright through this process and find contradictions between Rayfa's insights and what the seance reveals to prove Ahlbi innocent. It's an incredibly creative new game mechanic that fits in perfectly with the strange new setting.

In another major twist, players discover that if Phoenix fails to save Ahlbi from a guilty verdict, he'll suffer the same sentence as the boy. For more than 20 years, Khura'in's "Defense Culpability Act" has been in place. It states that defense attorneys are also to blame for their clients' crimes, resulting in countless lawyers winding up in prison. Things have gotten so bad that defense in the courtroom is entirely unheard of, meaning the prosecution is always right, and attorneys like Phoenix are demonized.

The stakes are higher than ever in this game with Phoenix's life on the line, but that doesn't stop him from doing what he thinks is right. By questioning the witnesses, pressing when things don't make sense and presenting evidence that contradicts their statements, players help him win the case. This totally shakes things up for the people of Khura'in.

Back home in the U.S., things are equally tense. Phoenix Wright's adopted daughter, Trucy, gets framed for murder during a magic show, and her dad isn't around to defend her. 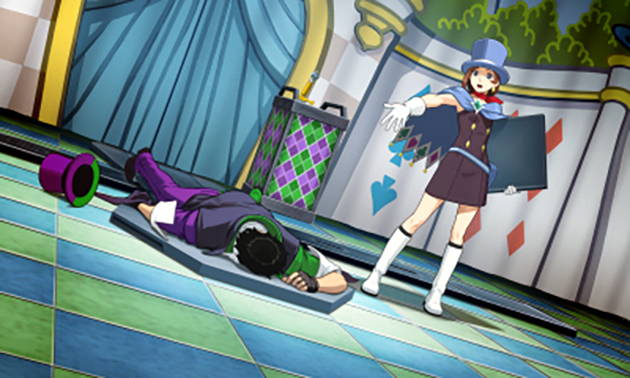 Luckily for Trucy, she has the young lawyers Apollo Justice and Athena Cykes on her side. They both work for her father, and have a couple of unique skills when it comes to cross-examining witnesses.

Apollo wears a special bracelet that helps him sense tension in a witness. By playing close attention to people's "tells"—whether it's an eye twitch or being extra fidgety with their hands—he can tell when they're being dishonest.

Athena, an expert on psychology, has hypersensitive hearing that allows her to pick up on people's emotions. Using a "Mood Matrix" consisting of happiness, anger, sadness and shock, she can detect deception when someone's words and feelings don't quite add up.

Both of these skills are fun to utilize in the game and break up the typical actions on the field of searching for evidence and gathering information from key witnesses.

Sometimes players also have to get hands-on with the evidence, whether it's solving a puzzle to unlock an ancient artifact or dusting for fingerprints. 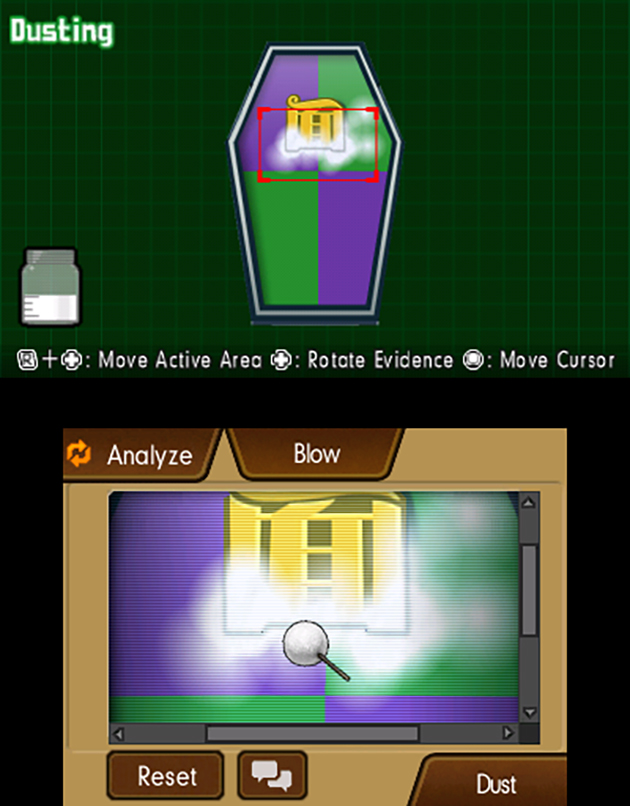 All of it comes together as evidence to use in court to prove your case. You'll need it, too, because the prosecutor in Trucy's case is the ruthless Nahyuta Sahdmadi from Khura'in, and he'll stop at nothing to get that guilty verdict. 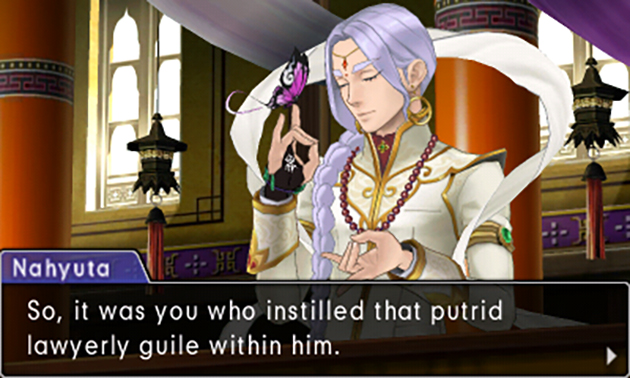 With Ahlbi cleared of charges back in Khura'in, Phoenix and Maya finally get the chance to reunite. But their reunion is quickly punctuated when she is charged for another murder.

Here, the player has to get super familiar with Khura'in's mythology and customs to win the case. Spirit of Justice completely embraces a mystical element that's been missing from the Ace Attorney series for a while. It's an awesome change making for more dynamic gameplay, and opens up opportunities for a lot of truly funny moments.

They'll also have to make use of Phoenix Wright's "psyche-lock" ability. When he sees that witnesses have locked some kind of truth deep within themselves, he can find inconsistencies within their statements to bring the facts to light. 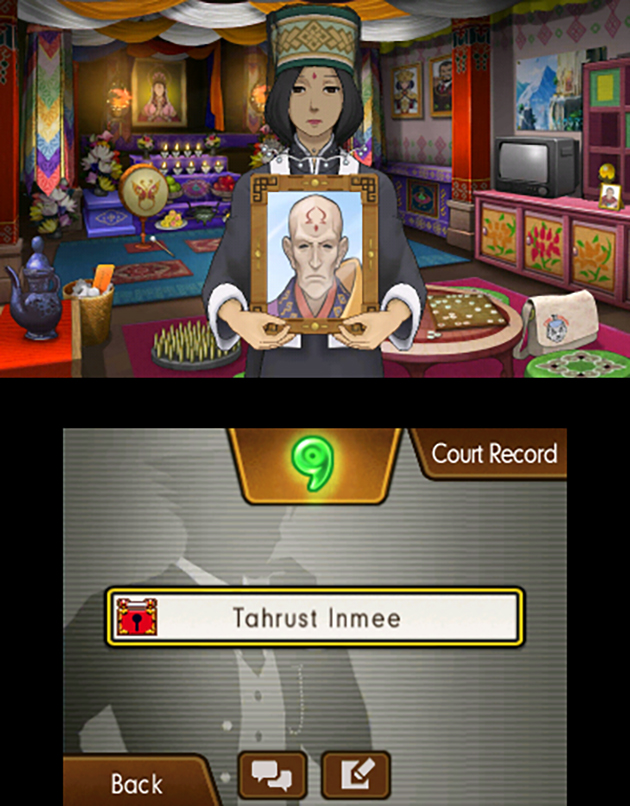 Throughout Spirit of Justice, we swap back and forth between Phoenix's cases and Apollo and Athena's, and the game never ceases to mix things up. Each of these cases will take hours to complete, which is a downside if you're impatient, but with some really lovable characters and trials that will keep you on your feet, that's actually a good thing.

This is also one of the tougher games in the Ace Attorney series, but as long as you take things slow and give yourself time to contemplate all of the clues, you'll make it through unscathed (and feel super clever in the process).

One thing that may or not annoy players is the downright goofy puns within characters' names. All of the Ace Attorney games are guilty of this, but it's particularly an issue in this game. I've mentioned the young tour name called Ahlbi Ur'gaid, but throughout the game you'll also encounter a hippie guitarist named Pees'lubn Andistan'dhin, a high priest and his wife called Tahrust and Beleeb Inmee, and a politician named Paul Atishon. It's a bit much, but such a small detail obviously isn't a deal-breaker.

The animation in this game, both in the anime cutscenes and the regular gameplay, is the best in the series so far, and looks especially good with the system's built-in 3D turned all the way up.

For fans of the Ace Attorney series, this game is a must. Not only do we get to see the return of old beloved characters, but the game finally reveals important details about our main protagonists. If you like Apollo, you'll love discovering his hidden past, and the surprise twist in the final trial will make players question everything. The game is out today, so go get it.

Looking for something else to play this fall? Click HERE to read our review of Metroid Prime: Federation Force.