Who's On Our Bae Pierson Fodé's "Kiss List"? 20 Questions With Pierson!

If you weren't counting down the days until you could see Pierson Fodé in Naomi and Ely's No Kiss List, you might be living under a rock.  It's out NOW, and you can get it here on iTunes! Why should you be obsessed?

– It's out NOW. Is your inner fangirl prepared?

– We sat down with our bae Pierson (because we're amazing like that) to find out what he had to say about the movie, and btw we are dying about how cute Pierson and his dog are. AWWWWW!

1. What's one emoji that doesn't exist that you wish did?

They recently announced a unicorn emoji, and I've wanted that for so long. I've also wanted to do a suave wink so bad. There's already the goofy wink, but I'd want the suave smirk, winking.

2. What made you want to be a part of Naomi & Ely's No Kiss List?
The main thing that intrigued me was the fun, romantic story and getting to play a character that I never have before. The heart of the story is about unrequited love. We've all liked someone that did not feel the same way about us and it's so disappointing and I really connected with that.

3. Which fictional character would be on your kiss list?

Jessica Rabbit. I remember seeing the previews for Who Framed Roger Rabbit as a little kid, and I was so stressed out because my parents were in the room, like "I hope they don't know that I think she's attractive because she's a cartoon character and that's weird." 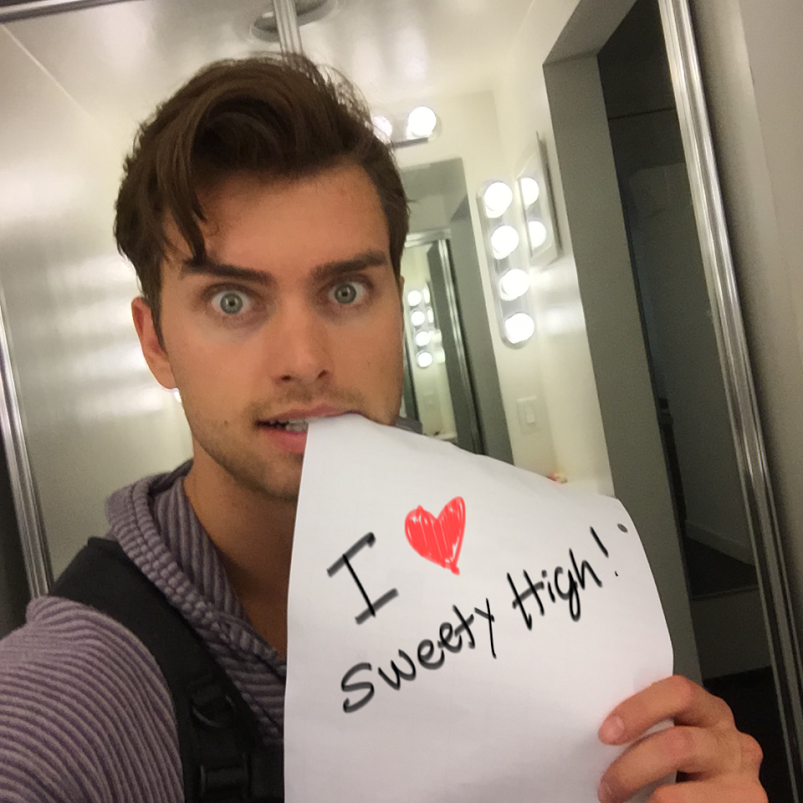 My typical selfie is me doing some sort of odd face into the camera, being rather conceited-looking or blue steel-ing, and I take the shot and stare at it for a while and delete it from my phone and try 12 more times.

It's gotta be X-Pro II or Valencia. I go for that warm cream color. It looks nice.

6. Posting a bad selfie or falling in front of your crush?

Falling in front of my crush. That will be forgotten. A selfie's up there forever, man.

7. What's the lock screen on your phone?

8. If you could only eat one thing for the rest of your life, what would it be?

Definitely these fruit crepes I make myself, all from scratch. I make them with peaches and strawberries, yogurt and cottage cheese filling and a little bit of maple syrup.  I used to make them every other day for myself back home, so I've already had a lifetime of those.

9. What other celebrity do you always get compared to?

I used to get Jude Law quite a bit. Then I got Tom Welling for a while. Now it's mostly Matt Bomer and Henry Cavill.

10. What's the one movie you'd bring with you to a desert island?

Flight Of the Phoenix, so I could figure out a way to repair the plane that's abandoned on the island and fly home.

11. What movie have you seen more than 20 times?
Star Wars: Return Of the Jedi or Rocky 4. I used to watch those movies as a little kid and I would do push-ups thinking that either the force would awaken within myself and I'd be able to move objects with my mind, or I would become a great boxer.

12. If you could go back in time and star in any movie, which would it be and why?
I'm going to go with The Dark Knight or Fight Club. I don't want to replace Heath Ledger, because he did the most amazing performance of all time, but I'd love to be the Joker.

13. If your life were a soap opera, what would the title be?

The Real Farmers of Hollywood. But that's more of a reality title. How about The Pretty and Confused? I'm stealing from my show, The Bold and the Beautiful.

14. What's one word you always overuse? 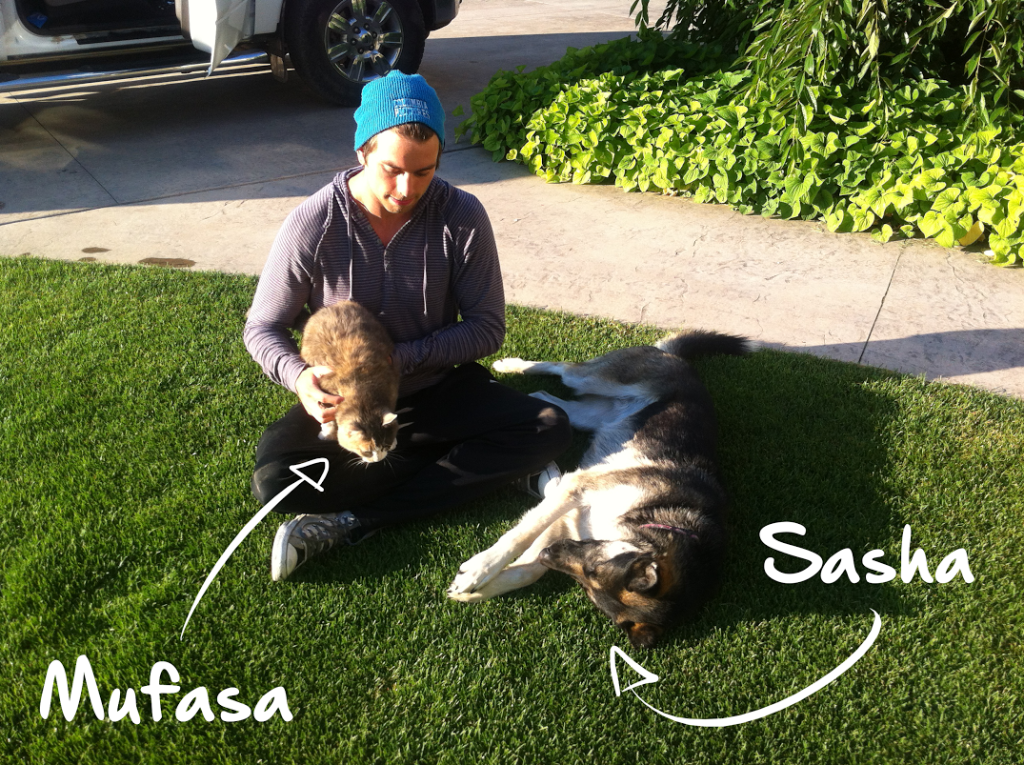 I do on the farm back home, if that counts. I raised cows my whole life, and I've got a cat named Mufasa and a German Shepherd, Sasha.

17. What do you stock up on when you go to the grocery store?

I always stock up on lots of fruit. It's my go-to thing when I'm wanting a snack. 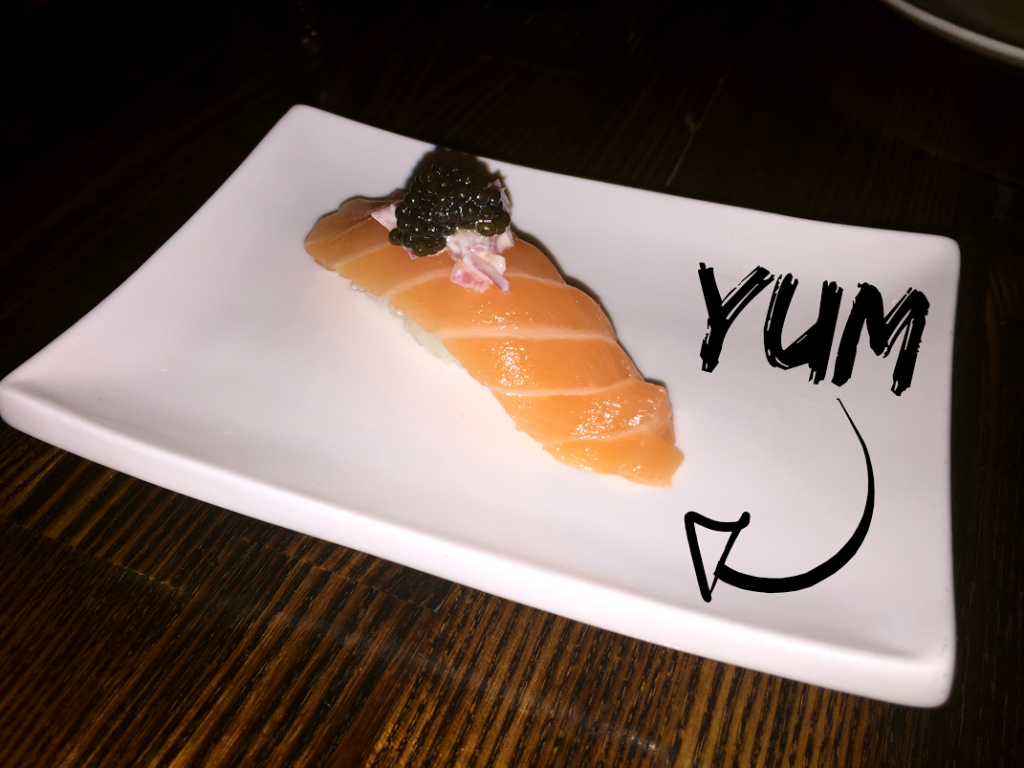 19. If you could spend an hour at the mall with anyone in the world, who would it be and what would you do?

I would spend an hour in the mall with Nikola Tesla, and ask him about the secrets of the universe and what he unlocked that he did not reveal to us. I'd say, "Bro, instill this information to me. I need to know".

We also asked Vine star Lauren Giraldo whether she'd rather post a bad selfie or fall in front of her crush. What do you think she picked?