Here's What Happened When I Tried 'Intention Scenting' for 7 Days

You may have heard of building a roadmap for your life by setting your intentions, but did you know that you can also use fragrance as a tool to live your best life?

That's exactly what Pinrose's new Intention Scenting kit aims to help us achieve. Because scents can conjure up old memories and bring about certain moods, the company believes that pairing fragrance with positive intentions can make them even stronger.

When Pinrose reached out to Sweety High, I thought the kit would be a perfect fit. I decided to commit to seven days of Intention Scenting to see how it might impact my life.

Pinrose's Intention Scenting Kit comes with a deck of nine tarot-like cards, each corresponding with one of the nine rollerball fragrances in the kit. Each day, the wearer shuffles the cards and selects one that decides the scent they'll wear that day.

Included is a guide for using the kit, complete with the meaning of each intention card, plus a small booklet with further info on wearing and layering each of the fragrances. It also comes with a small rose quartz crystal, which is said to help open the heart chakra and remind us all to love one another, for good measure. 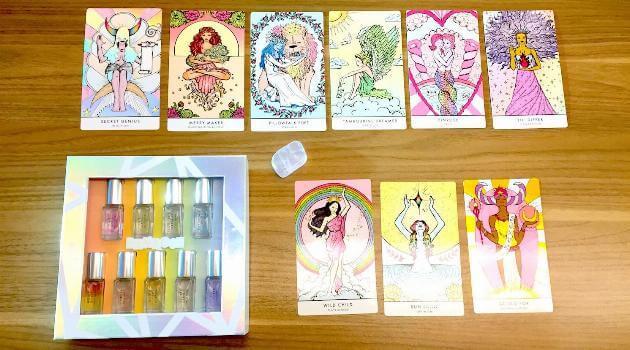 As soon as my Intention Scenting kit arrived on a Friday afternoon, I was eager to draw my first card and wear the accompanying scent. I got out the nine cards, shuffled them around to the best of my ability, and picked one out at random. It was the Secret Genius card, which symbolizes intuition, channeling your inner voice and connection with the universe. 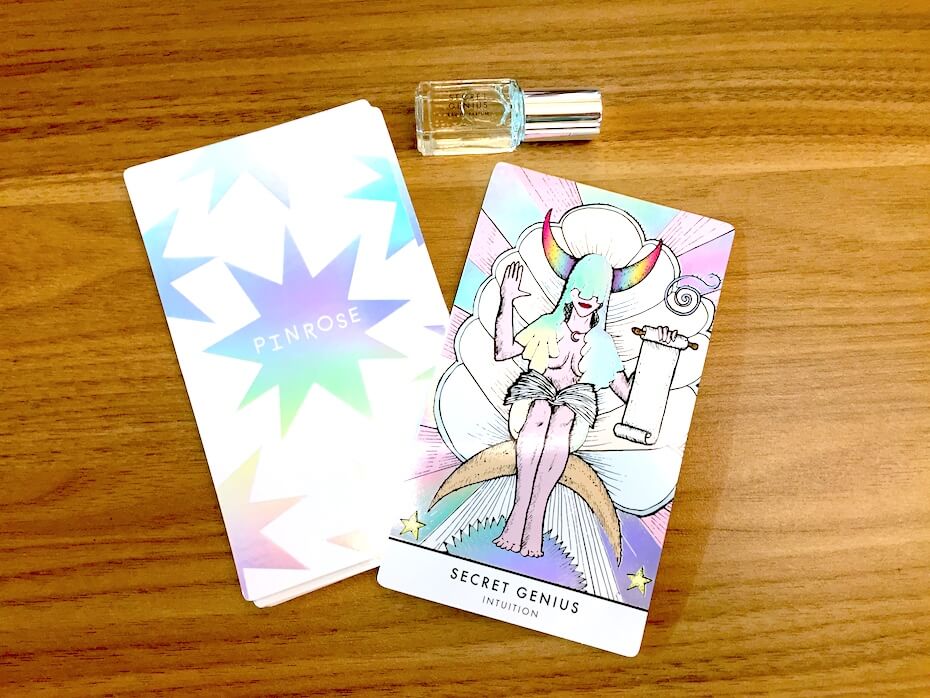 Next, I found its little clear bottle, twisted off the cap and rolled a little bit onto the back of my right hand. I gave it a moment to dry before taking in its sweet, delicately woody scent. Though the fragrance had hints of vanilla, it wasn't overpowering, which was definitely a good thing, because sickly sweet vanilla scents almost always give me a headache. I don't typically wear perfumes, but I was surprised by the sophistication of the scent and happy to wear it for the rest of the day.

I got some nice compliments on the fragrance throughout the day as well, and I don't know whether I can owe this to the fragrance or it was a coincidence, but I did find that my intuitions were more finely tuned. I was able to anticipate what people wanted or predict what they were going to say before they said it. It was actually kind of freaky.

I left the kit in the office over the weekend, but on Monday morning, it wasn't long before I drew another card. Funnily enough, I drew the Secret Genius card yet again. I decided to go with it, applying the same caramel-like scent to my hand, and again I felt like I was more in tune with the people around me.

On day three, I wondered if I would draw Secret Genius yet again, but this time, I pulled the Wild Child card. This card represents playfulness, fearlessness and creativity. I found the bottle, with its slight pink hue, and applied it. I gave it a chance to try before I gave it a whiff, discovering a soft floral scent with jasmine at its center. 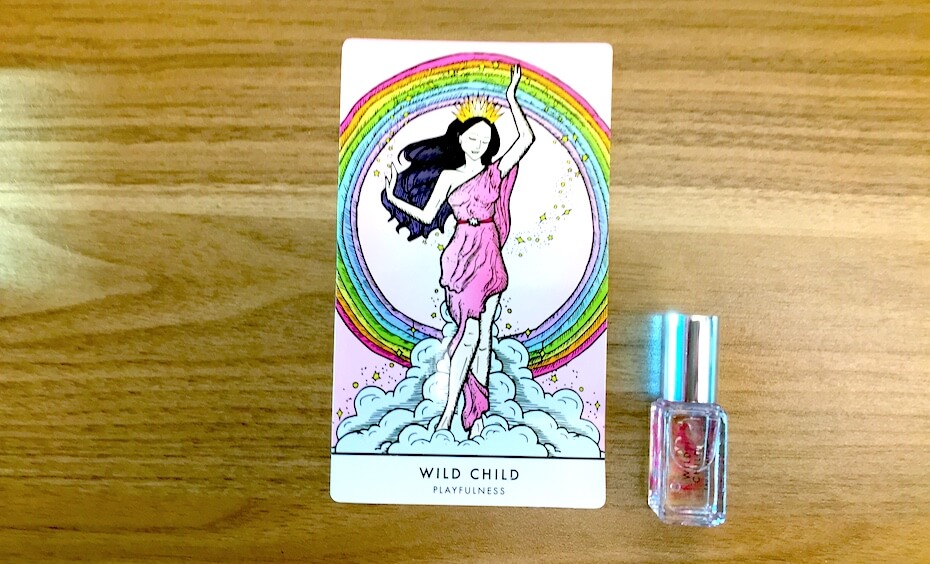 While I don't know that I was particularly playful that day, maybe it took me an extra 24 hours for the intention to set it. The following day was a Nintendo Direct that came with some really exciting new game announcements, including the release of Tetris 99, which I wound up playing for more than two hours. It's probably a coincidence, but it's impossible to really know for sure.

That Nintendo day was a Wednesday, and I happened to pull yet another Secret Genius card on it. I started wondering whether there was something about that card that was allowing me to pick it out from the others at random. While it does have holographic details on its front, so does the Gilded Fox card, which I've never picked. Maybe, as the card suggests, it's just my intuition guiding me to it.

The following day was Valentine's Day, so I was extra curious to see which card I would pull. Would I get my Secret Genius card again? That ended up not being the case, as I, instead, plucked the Tambourine Dreamer card from the pack. The card represents gratitude, asking us to appreciate everything that life gives us. According to the guide, "She is also supportive during high days of celebration—like weddings, graduations and moments of pure love between friends and family." That sounded appropriate for Valentine's Day. 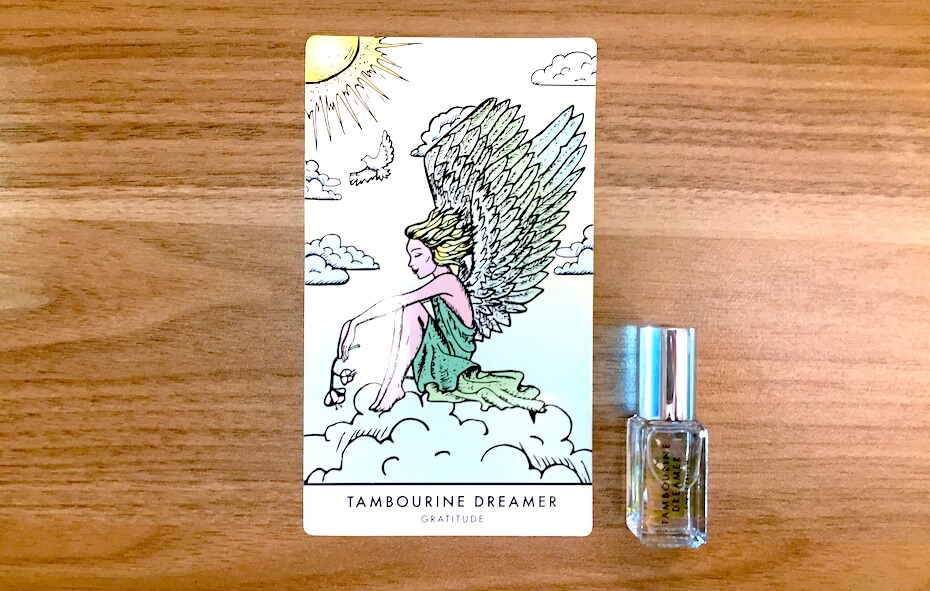 I rolled some onto my hand and let it try before breathing its scent deeply into my lungs. It was subtly citrusy, but the prominent scent was ylang ylang, which happens to be one of my very favorite essential oils. The peaceful, soothing fragrance felt perfectly representative of being grateful, and I wound up having a nice, quiet Valentine's evening full of macarons, Star Trek and way too much chocolate. I have a lot to be thankful for, and the fragrance might have helped me realize that even further.

Unfortunately, the kit doesn't have a scent that ties directly to health, because I woke up feeling super sick the next morning, and due to the combination of a long weekend and my sinuses being completely blocked, I didn't pull another card until the following Wednesday.

To my disbelief, I pulled the Secret Genius card yet again. I didn't mind, because I adore the scent that goes along with it, but it was getting a little ridiculous at this point. Then, I got Secret Genius again on the following day. I couldn't believe that after picking cards on seven different days, I pulled Secret Genius five times. I'd pulled a week's worth of cards and only tried on three scents!

Though I didn't get around to wearing them and feeling their effects, here's what I think of the other fragrances right out of the bottle:

Gilded Fox smells like chocolate with light floral notes. I don't feel like that should work as a fancy perfume, but it smells incredible. There's something empowering about the scent, which makes sense given that the card is tied to determination. 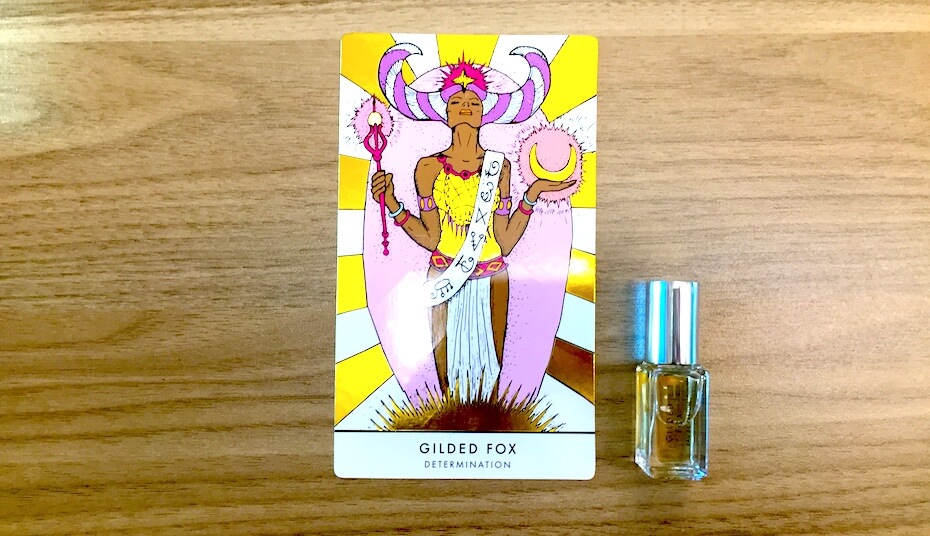 Merry Maker is the subtlest fragrance in the kit. It smells a little grassy and a little fruity, and it'd be just the thing if you wanted to wear a little fragrance that's more for yourself than for anyone else. The card symbolizes unconditional love. Maybe the idea is that love comes from within, and not from an external source. 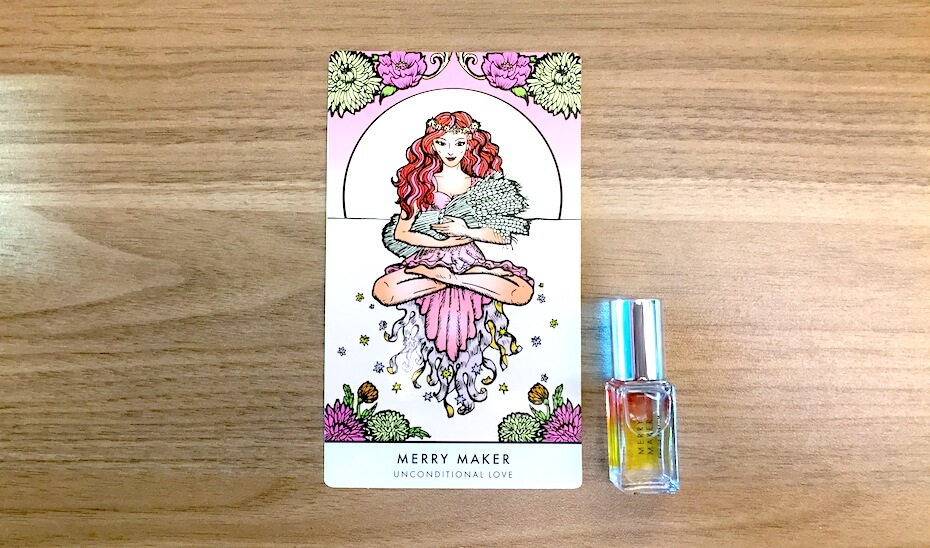 Lil' Dipper combines the scent of apple and lavender to create a deliciously dreamy scent. It's somehow sharp and delicate all at once. The card represents compassion and emotion, which corresponds well with its romantic fragrance. 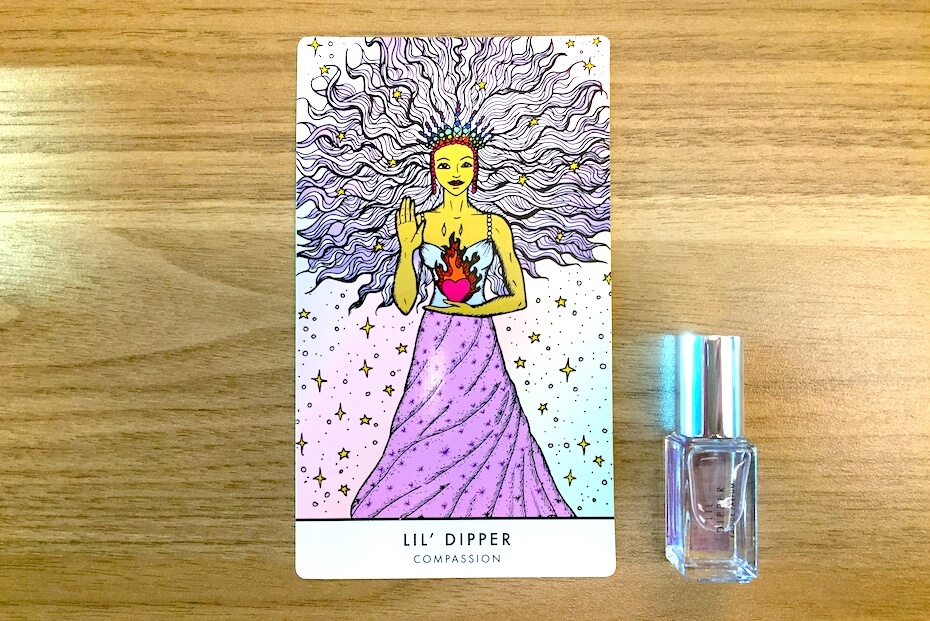 Sun Saint appropriately has the beachy coconut and citrus scents of a piña colada. It's bright without being too powerful, and it reminds me of being on vacation. Since the card symbolizes optimism, I think it's a very appropriate pairing. 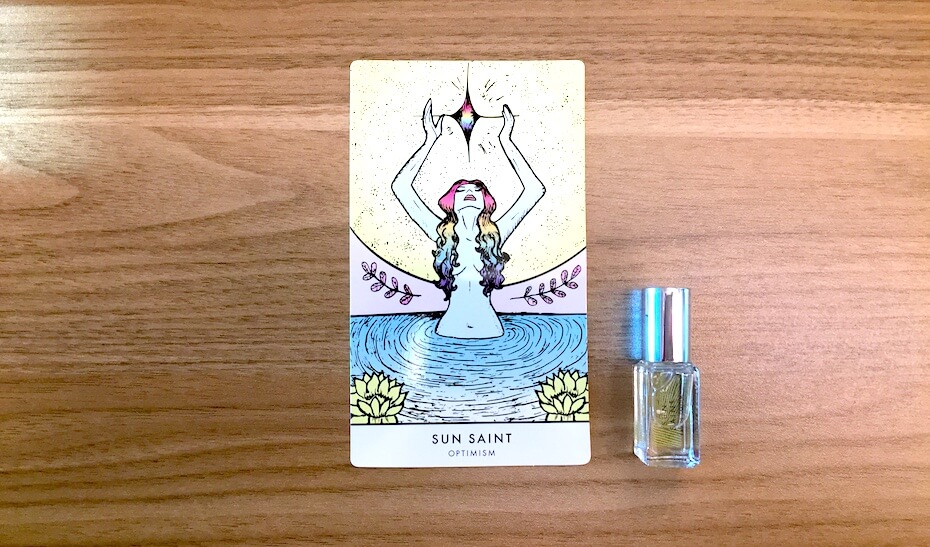 Pillowtalk Poet is the most mature of the scents in the kit. It smells like a slightly musky baby powder, and, to me, seems like something that'd be better for a night out than a quiet evening at home. There's something punchy about the aroma, which makes sense because the card represents strength. 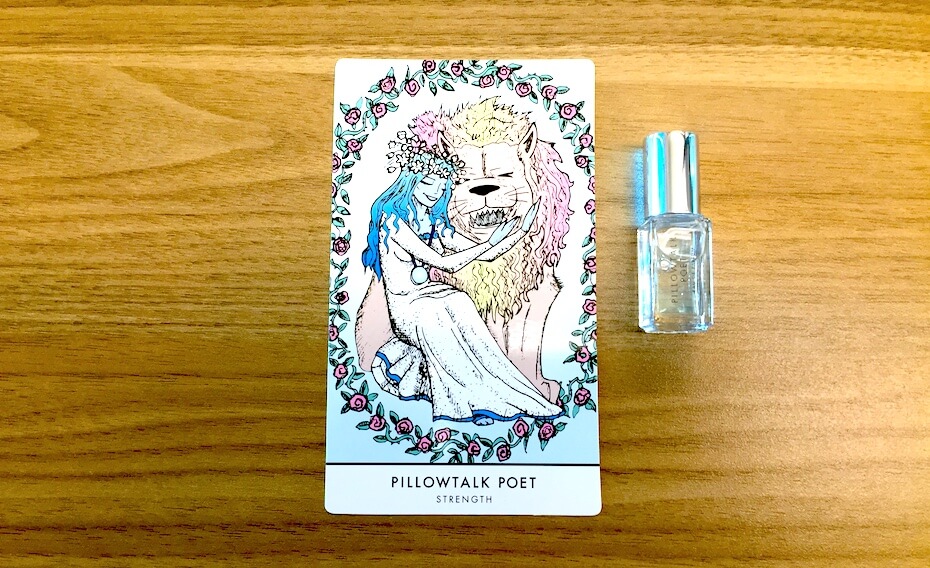 Pinrose smells of roses and spicy clove. While it mainly has a floral scent, there are also spicy notes that make it more complex and bring out something romantic in the fragrance. The card represents trust, and the bold fragrance matches the sentiment well. 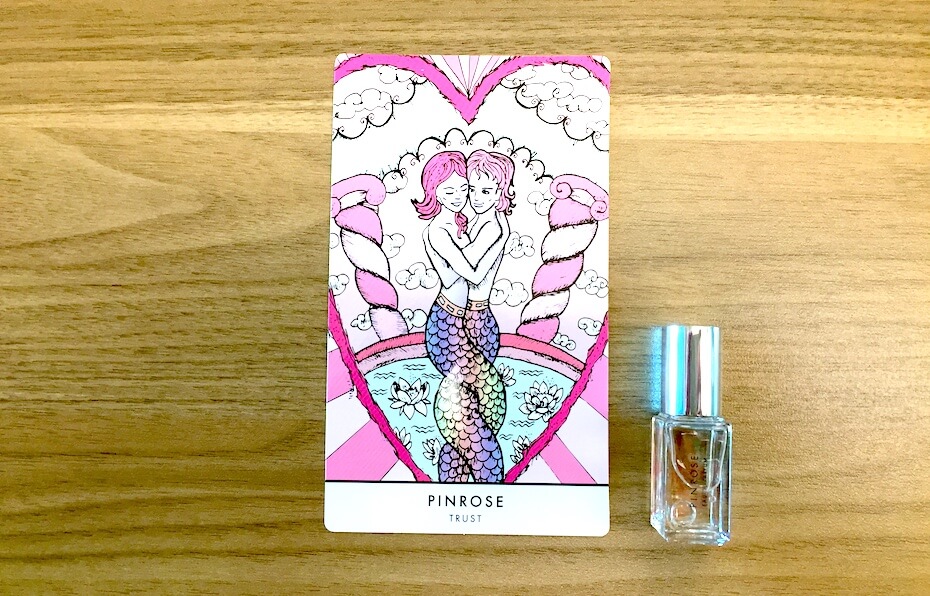 There's a lot to love about Pinrose's Intention Scenting kit. As someone who doesn't typically wear fragrances, I find that it makes them super accessible and gives me a real reason to spritz something on besides simply smelling good. Plus, I don't have to commit to one big, expensive bottle of something, only to get tired of it right away. Having nine fragrances to choose from gives me a lot of options—even if I'm not the one doing the choosing.

I've always thought that there's a little magic in believing in something, and setting intentions with scents really did change the way I thought and felt on the days I wore them. I've really enjoyed giving in more to my intuition than to logic, and it's gotten me great results so far. Plus, there's something uncanny about pulling the same card again and again and again.

The Intention Scenting kit costs $50 on Pinrose's website, which might sound a bit expensive but is a deal for nine different scents, plus cards and a rose quartz crystal. Every one of the fragrances is elegant and grown up, but won't make you smell like an old lady, either. The bottles may be small, but since they're concentrated and applied with a rollerball, I get the feeling they'll last a long time.

Now that I'm done with my little experiment, I plan to follow the guides to use them for aromatherapy and boost certain moods when I need them, or layer them together to reap multiple benefits at once. These scents just may have turned me on to finally becoming a perfume-wearer.

P.S. I pulled another card right now just for the fun of it and got Secret Genius. Again.