Lunumbra's cards utilize the existing art on the card, weaving it into a more intricate illustration that makes the scene on the card appear so much bigger than it had before. We were curious about how these cards came to be, so we reached out to the artist herself for answers.

Sweety High: Tell us about your history with art.

Lunumbra: I've always been passionate about art. My mom often tells me that as soon as I could pick up a pencil, I started drawing. My favorite things to draw during my childhood were dragons and animals, and of course Pokémon. I always had a sketchbook handy to draw whatever was on my mind. During elementary school I was lucky enough to have an art class every couple of days. It wasn't super structured and was more of a "free time" class where we could draw, paint and create whatever we wanted.

Unfortunately in high school, the art program was cut and I no longer was able to participate in art classes. But I still drew in my free time, and even started to pick up painting. I was still so heavily involved in art that I decided to major in it.

They say art majors are doomed to starve, but I had a great time and made quite a bit of money off of my art during school. I was lucky enough to attend Berea College, a private liberal arts school. While my major was art, I focused on the study of printmaking. Printmaking involves a lot of fine handwork and illustration, which was my main passion, but I continued to develop my painting skills as well.

SH: Where did you get the idea to start painting on Pokémon cards?

Lunumbra: I got the idea for painting cards when I was home on vacation from school around August 2014. I had recently gotten into Magic: the Gathering and I came across MTG card alters on the internet. I thought they were gorgeous and that it was such a cool idea, so I tried to find Pokémon ones. To my surprise, I couldn't find any.

Despite Pokémon's popularity, it seemed that this art form had slipped through the cracks and just wasn't practiced nearly as much as in the MTG community. I liked the idea a lot so I tried it myself. I posted what I had made on the Pokémon subreddit and it kind of took off. I had so many messages from people wanting to buy them and asking me to make more of them that it was rather alarming. Back then I sold the cards for $12 each and honestly they were not very good quality. I don't even think I sealed them with a clear coat, so I wonder if they held up very well.

It took a while to perfect the artwork. I'm still somewhat ashamed that the first cards I did got so popular. I honestly do not like the way they looked very much, as they had a lot of leftover texture from the paint, some of the colors didn't match quite right and my method for showing the text was rather rushed and unprofessional-looking. Not to mention, my picture quality was terrible. Comparing them to what I produce now, two years later, I would hope people are surprised by the increase in quality. 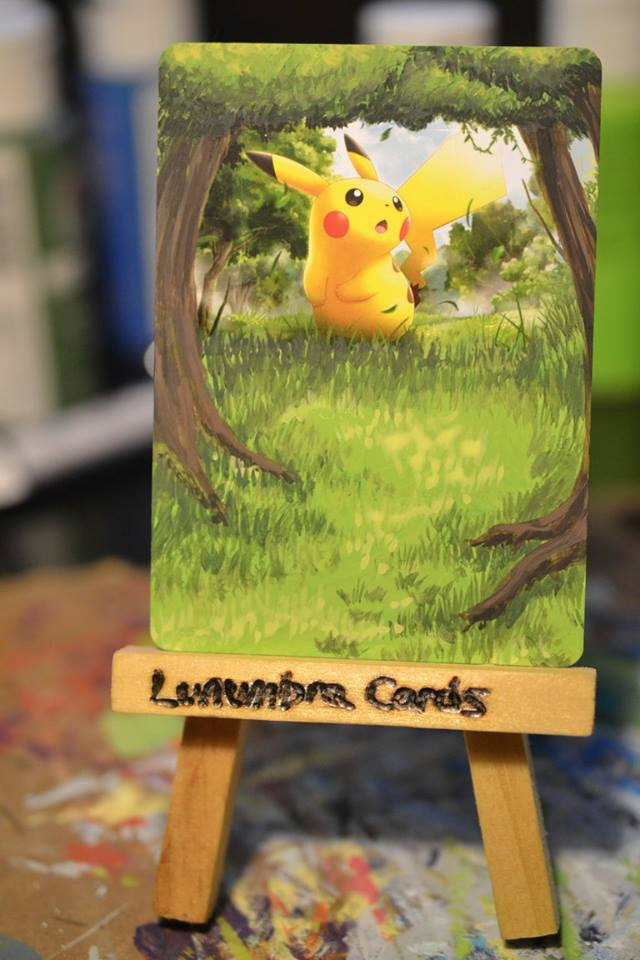 Lunumbra: I would describe my methods as a bit haphazard. I used to really take my time and plan out what I was going to do—sometimes I would even sketch it out with a pencil. Now, I produce so many of these cards that I just pick it up and start. I do consider what I want the card to look like, but it is much easier now to visualize a lovely scene and recreate it utilizing the previous artwork without much planning involved. Some more complex cards that include building or large amounts of geometry do require a little more planning, but most nature scenes just develop as I go along. I stream a lot on Twitch and sometimes if I am running short on creative ideas I will ask my viewers what to add. They always comes up with great ideas.

SH: What tools do you use to paint your cards?

Lunumbra: I have always used Apple Barrel acrylics. They are super cheap, can be bought easily just about anywhere and come in a large assortment of colors. I use whatever brushes I have available at the time, so I don't have a specific brand that I look for, but I do try to use liners as they allow me to paint fine details. I also use a lot of water to not only clean my brushes but to also mix with the paints to thin them and prevent rough textures on the product. Finally, I use toothpicks to remove any paint that I do not want—to reveal text, for example—and a white gel pen to put in extra small details. 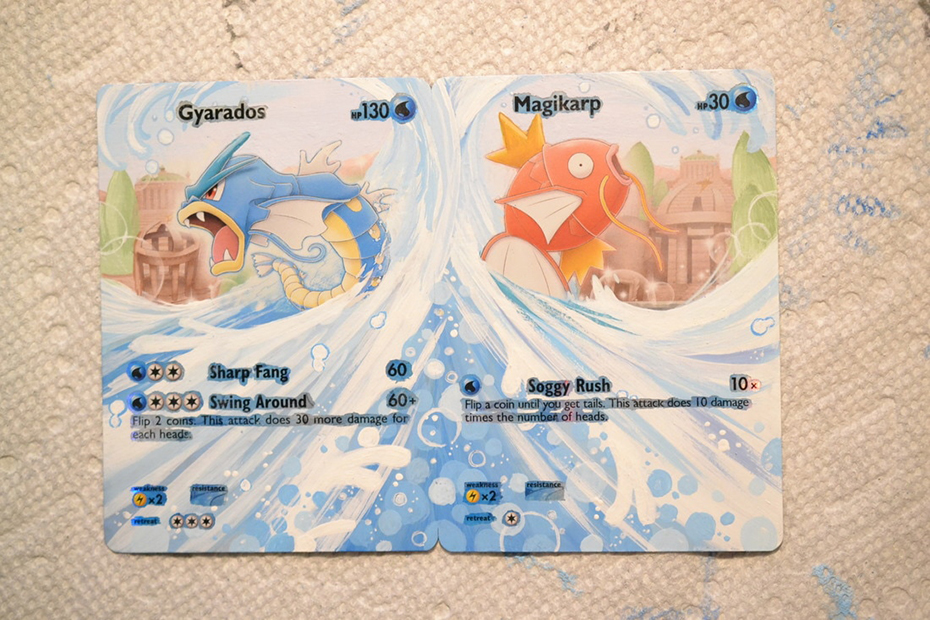 SH:  How long have you been a Pokémon fan?

Lunumbra: I've loved Pokémon since as far back as I can remember. My first game was Pokémon: Crystal, which is still my favorite, though I own and have played all others up to Sun and Moon. Soul Silver is a close second.

I've been collecting the cards since the base set and have a huge variety of other Pokémon things, including cardboard displays and statues. Pokémon has always been in my life so any chance I get to collect it, I do so. My favorite Pokemon are Cyndaquil and Breloom. 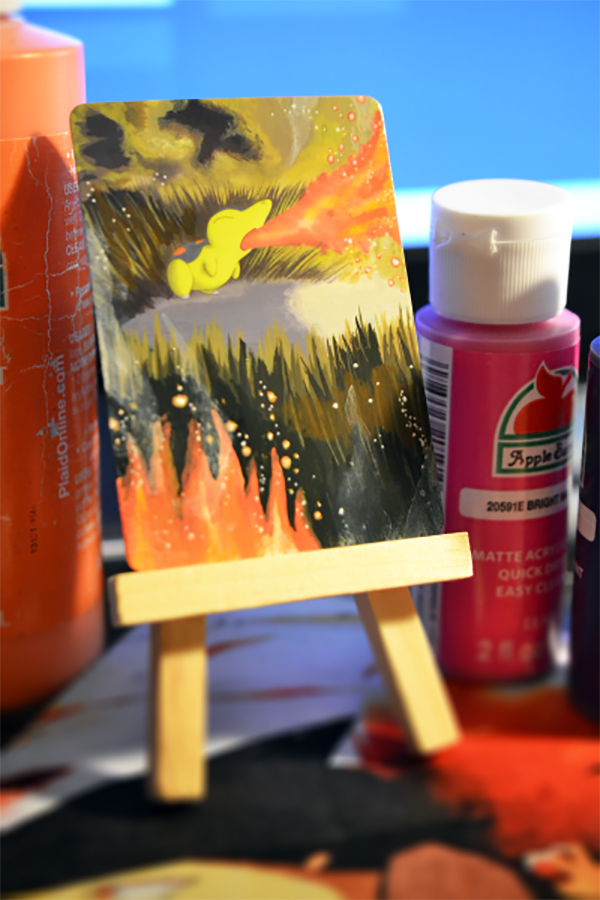 SH: Is there one card you're proudest of?

Lunumbra:  Every couple of months I get a new card that I'm the most proud of, usually because I feel like I have developed a new technique or mastered a new style. Right now it is the Lapras card that I did a few weeks ago. I had been working on trying to improve my water scenes and sunsets and this card had both. It was challenging, but I fell in love with the result and it is my favorite card at this time. 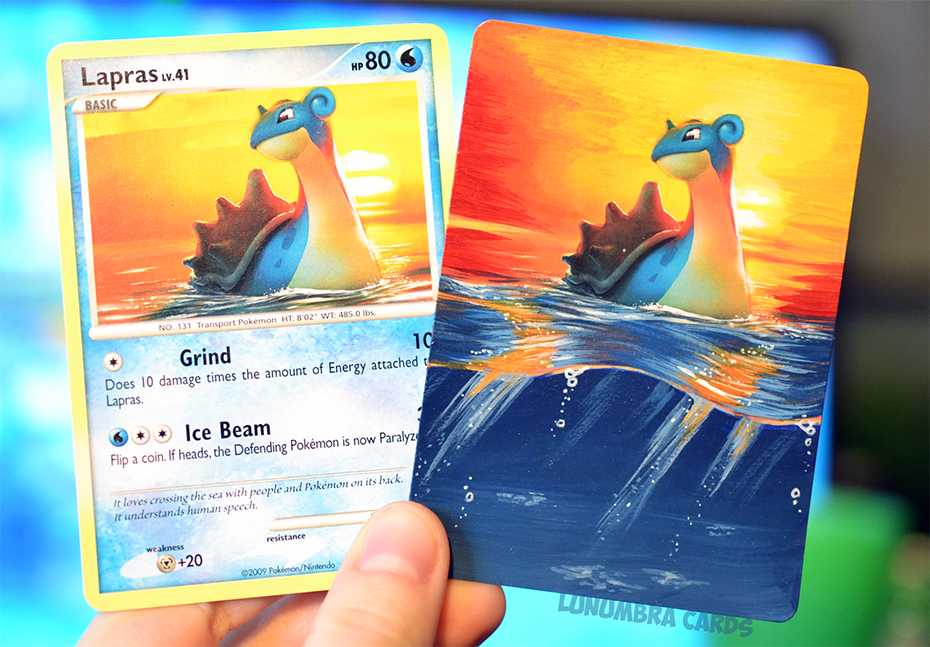 SH: Is there a card that you'd love to do but you can't because of rarity or cost?

Lunumbra:  I have always secretly (for fear of being hunted down for doing so) wanted to paint a Crystal Ho-oh card. Let's just say they are rather pricey. I do love the artwork in it, though, and if they weren't so rare, I would paint one in a heartbeat. 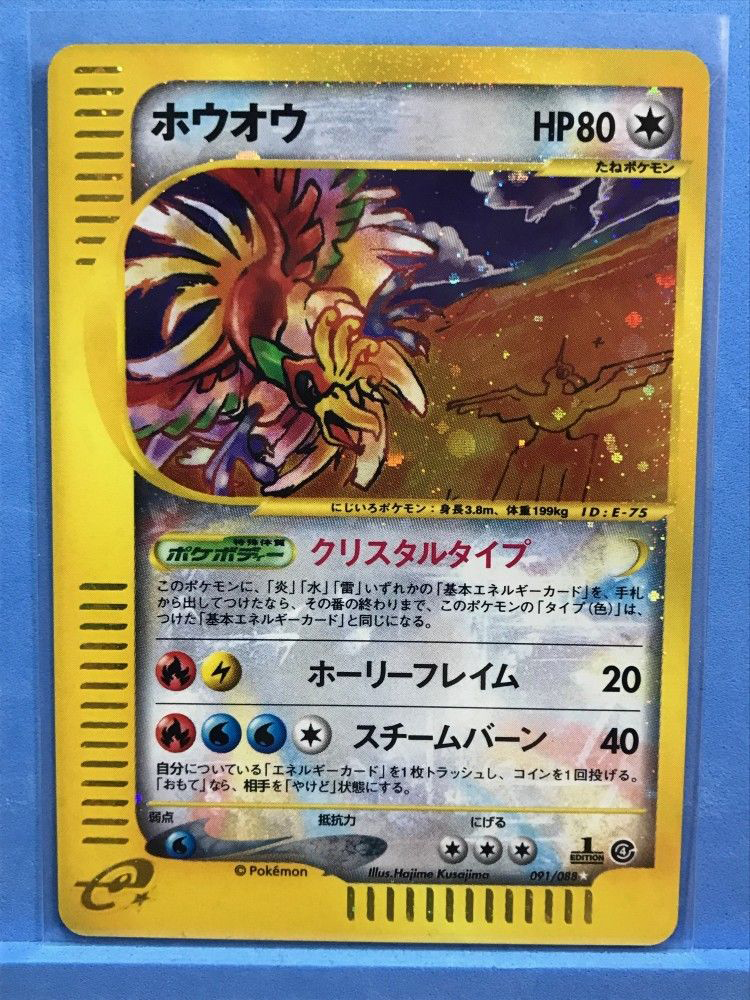 SH: Why do you think your paintings have captured so many people's attention?

Lunumbra:  I think my cards have become so popular because they're new. Like I mentioned before, there aren't a ton of Pokémon card alterers out there. I'm also sure most people who love Pokémon have loved the cards before they could even read—this means that the text isn't what sticks with them, but the artwork. I think when people see what the cards can look like without that border, it's recreating what they imagined all along: A big, thriving environment inhabited by Pokémon. Instead of being confined to a tiny illustration box, they may roam around the card freely. 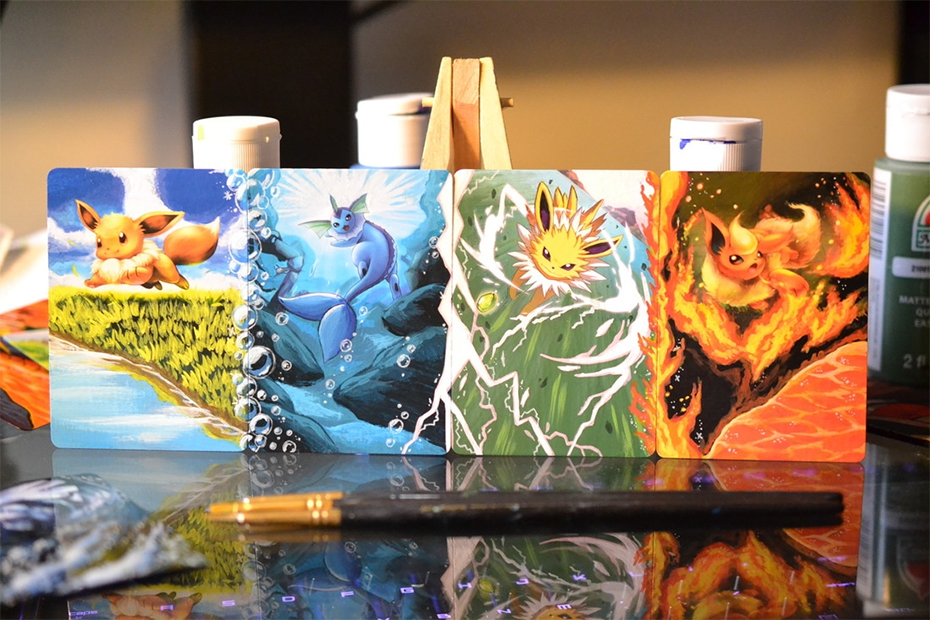 SH: What advice do you have for aspiring painters?

Lunumbra: Unfortunately, when it comes to art there aren't a bunch of secret tips to help you get good. Most of it is practice and being patient. I would suggest pushing yourself out of your comfort zone as often as possible. Do you draw a lot of plants? Try animals.

Another suggestion is finding an artist you look up to and copying them. I'm not saying copy them to a point of tracing their work and uploading it with your name, but look at what they do. Think about how they use lines and color to create a feeling. Try drawing it yourself and think about what you do differently and how that affects the end result.

Then ask for feedback. What looks and reads good to you may not necessarily read the same to someone else. Find those loopholes and try to patch them. Practice, practice, practice and never stop creating!

For some Pokémon art that's not quite this beautiful, click HERE to see what happened when we attempted recipes from The Pokémon Cookbook.