Here's What Happened During My First Week of Pokémon Go

My obsession with Pokémon Go started way before the game's launch last week.

I'm a long-time Pokémon fan, so of course I was excited about the prospect of catching the "pocket monster" out in the real world. This gorgeous trailer, released last September, gave me goosebumps and made me desperate to download the app the second I could.

So when Pokémon Go finally became available on July 6, I got the app and got ready to go off on my biggest Pokémon adventure yet.

Once I'd set up my account, I was immediately met by this screen. 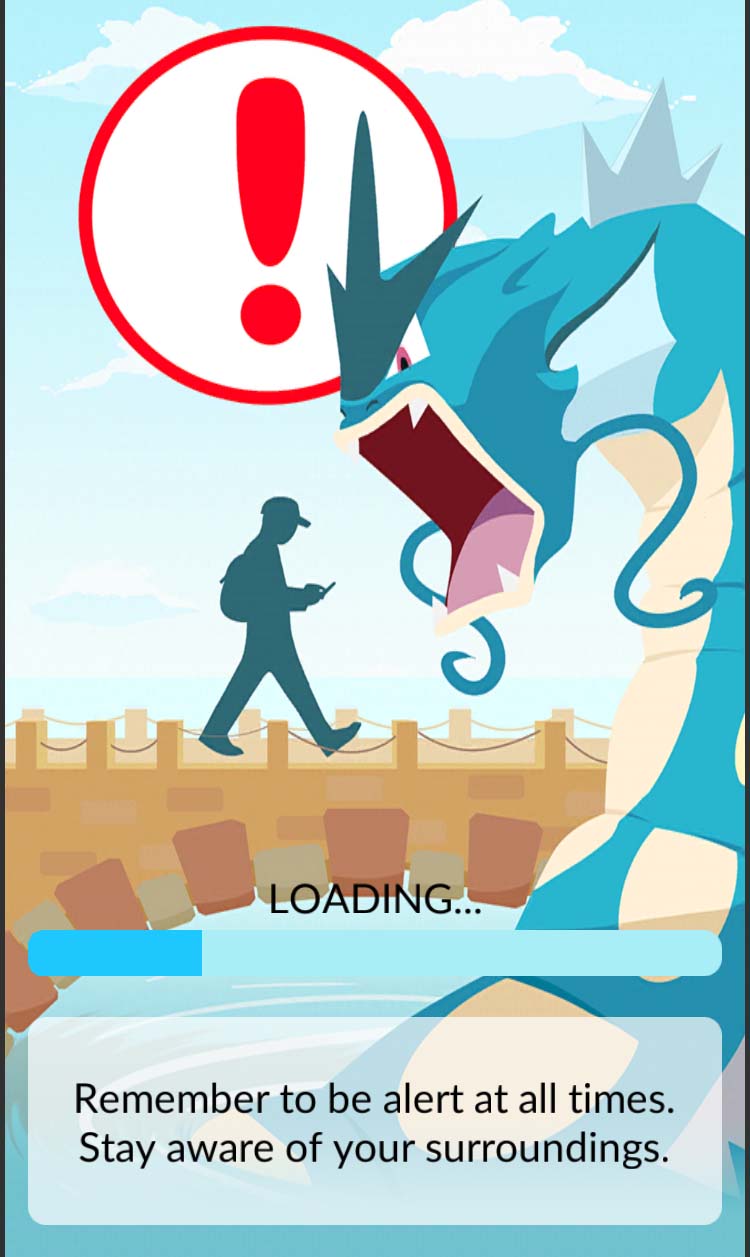 In real life there's no danger of being gobbled up by a rampaging Gyarados, but this is a super important screen nonetheless (which is probably why it shows up again every time you boot up the game).

I knew I had to set some ground rules:

Sticking to that last one has proved a lot harder than expected.

Next I met this game's new Pokémon prof, Professor Willow, and tried to make my in-game avatar look a little bit more like me. I would have liked a couple more options (she's not me unless she's wearing my glasses!), but that's not what this game is about. 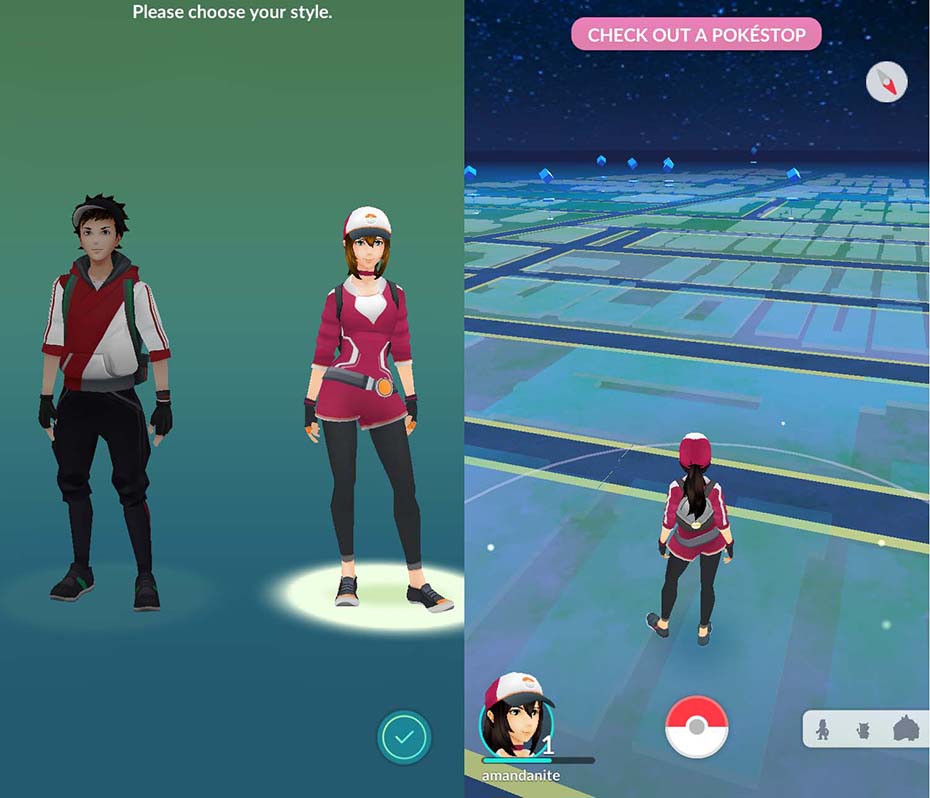 Then it was time to pick my starter Pokémon. I passed on Squirtle and Charmander to select my go-to, Bulbasaur. 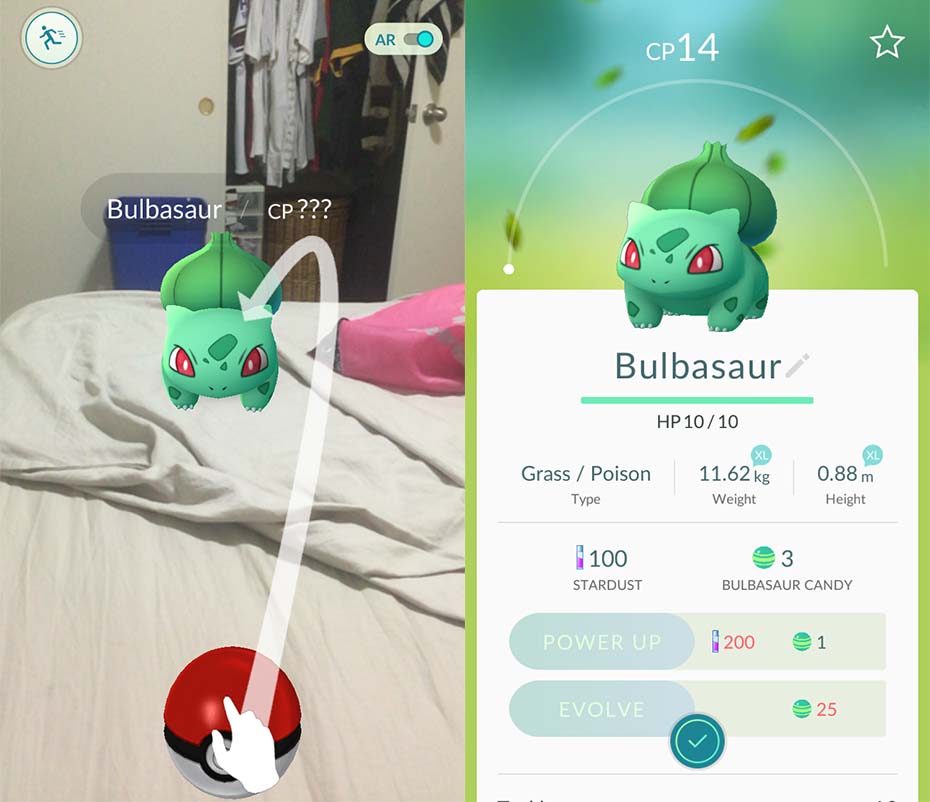 This was my first tangle with augmented reality, or AR for short. Seeing Bulbasaur at the foot of my bed didn't necessary change my life, but it did make my giddy. There was a Bulbasaur on my bed! I caught him with my first Pokéball and named him Garloc.

My new Bulbasaur showed me I still had a lot to learn. Was it important that he was particularly heavier and taller than other Bulbasaurs? What in the world are Stardust and Bulbasaur candies?

With most of my questions unanswered, I named myself amandanite (my goal is to have a whole team of powerful Dragonites) and started exploring.

The first break I got, I headed out to expand my collection. This leaping Cubone seemed pretty elusive at first. 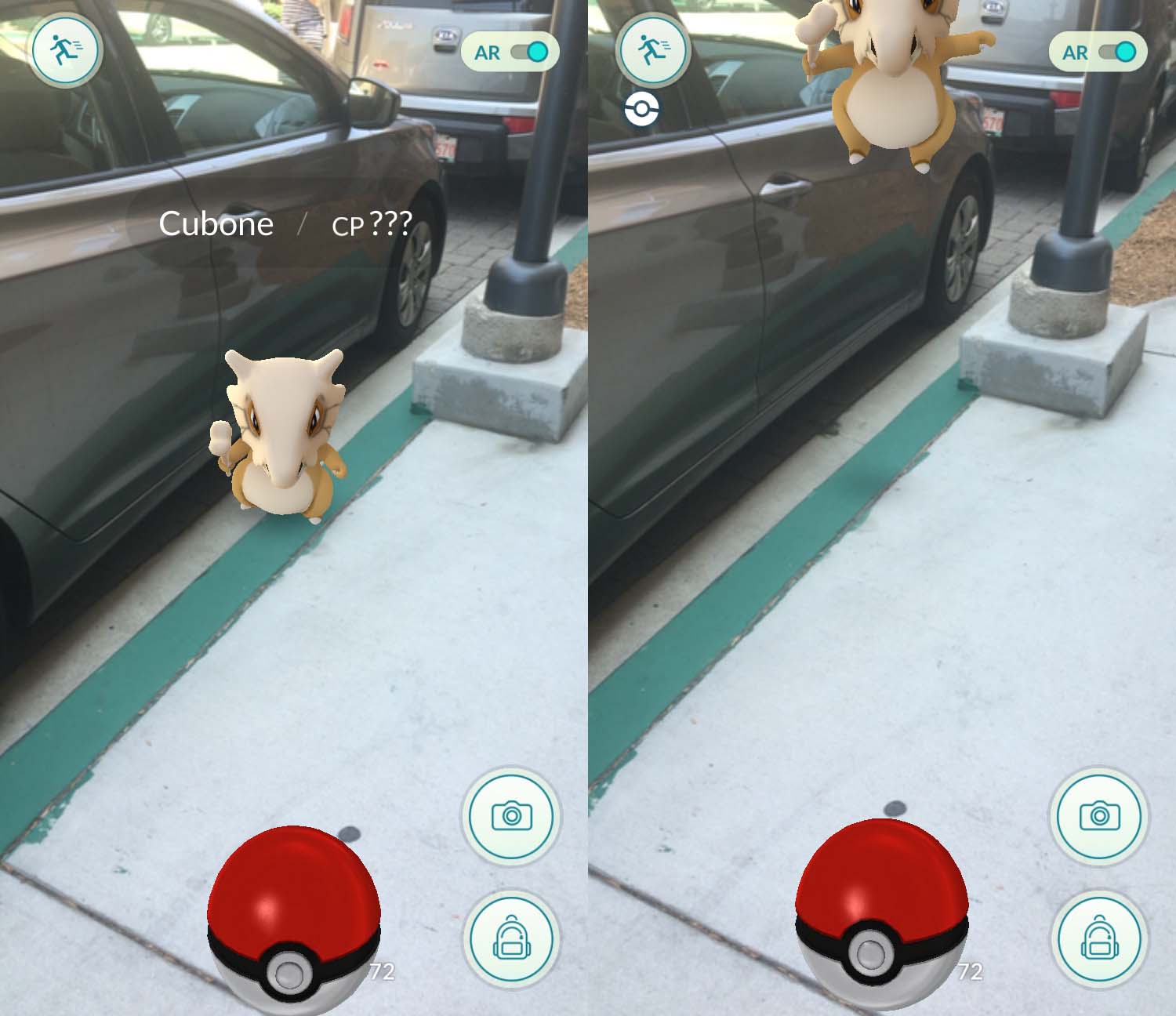 Throwing a Pokéball to catch a Pokémon was a bit of a mystery in the beginning. There was a shrinking circle and some timing involved, and I had no idea whether a big circle was good, or a small circle was better.

What I did learn is that you want to aim precisely, usually at the Pokémon's head, for the best chance at success. After just a couple of Pokémon balls, he was mine.

With my catch, I also gained three Cubone candies. I learned that I needed 50 candies to evolve Cubone into Marowak. That's a lot of Cubones.

These blue things are Pokéstops. They're typically tied to landmarks on the map, and if I get close enough to them, I can spin the disc that appears onscreen to get free stuff. Yay! 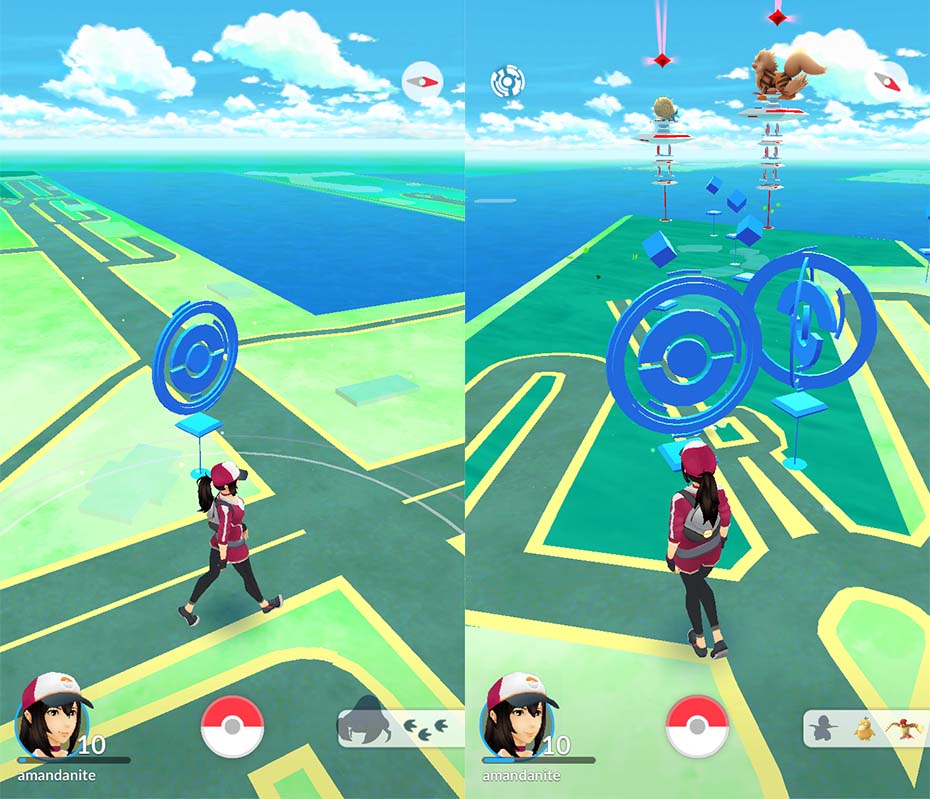 I'm very lucky to be playing Pokémon Go in Los Angeles, where Pokéstops are pretty much everywhere, and sometimes appear in huge clusters where you can get tons of Pokéballs, Eggs and other items without running all around town. I stop at pretty much every one I can.

After level 5, I started picking up Potions and Revives, and at level 8, I started nabbing Razz Berries, which calm down Pokémon and make them easier to catch. Since my goal is to catch every one to complete my Pokédex, I'm a big fan of Pokéstops.

I've had no luck finding any Pokémon in my apartment building using the normal methods, and I was feeling particularly lazy when I tried using an Incense item for the first time. 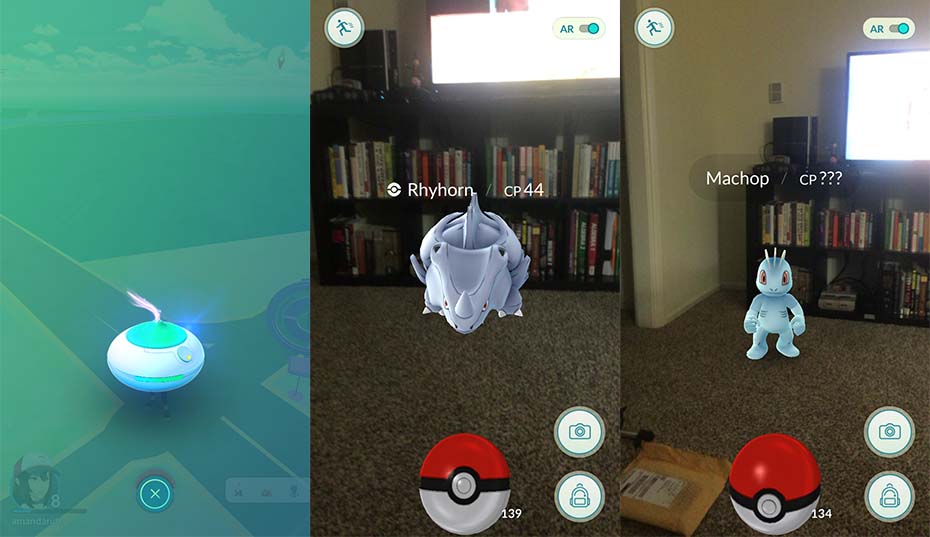 With the help of the Incense, Pokémon were lured right into my living room for half an hour. I caught a couple of new guys, including a Rhyhorn and a Machop, without ever leaving the comfort of my couch.

The room was never overrun with them, but a new Pokémon showed up about once every five minutes.

Overall, my Incense run was pretty successful, but I'm sure they're way more effective out in the wild. I have a couple Incense left, so that's something I still need to test out!

I've heard it's best to toggle off the augmented reality option when you're catching Pokémon. Supposedly, it saves a lot of battery and makes Pokémon easier to catch. But I refuse. 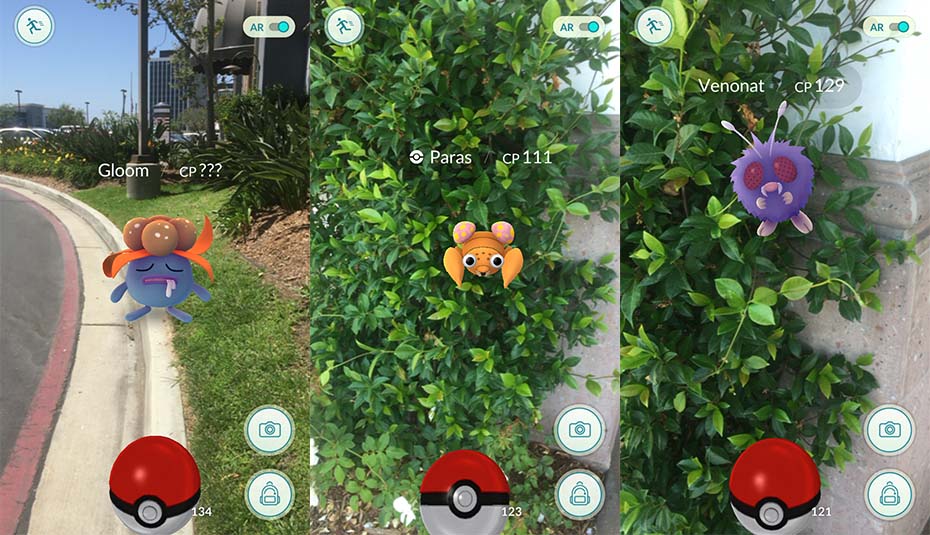 I think catching a grass-type Gloom in a grassy patch, or bug-type critters Paras and Venonat against crawling ivy adds a lot to the experience. You're free to turn it off if you like, but to me it feels plain wrong.

Sometimes visiting a Pokéstop will reward you with an Egg, which can hatch into a Pokémon after you've taken a prescribed number of steps. You can only incubate a limited number of Eggs at a time, so to hatch all my Eggs, I'm going to have to walk. A lot.

And don't be like me, thinking you can trick the system by leaving Pokémon Go on while you're driving. If you're moving along way faster than any human can walk, the game knows it, and it won't count.

So after a 5-kilometer walk, I finally hatched my first Egg. 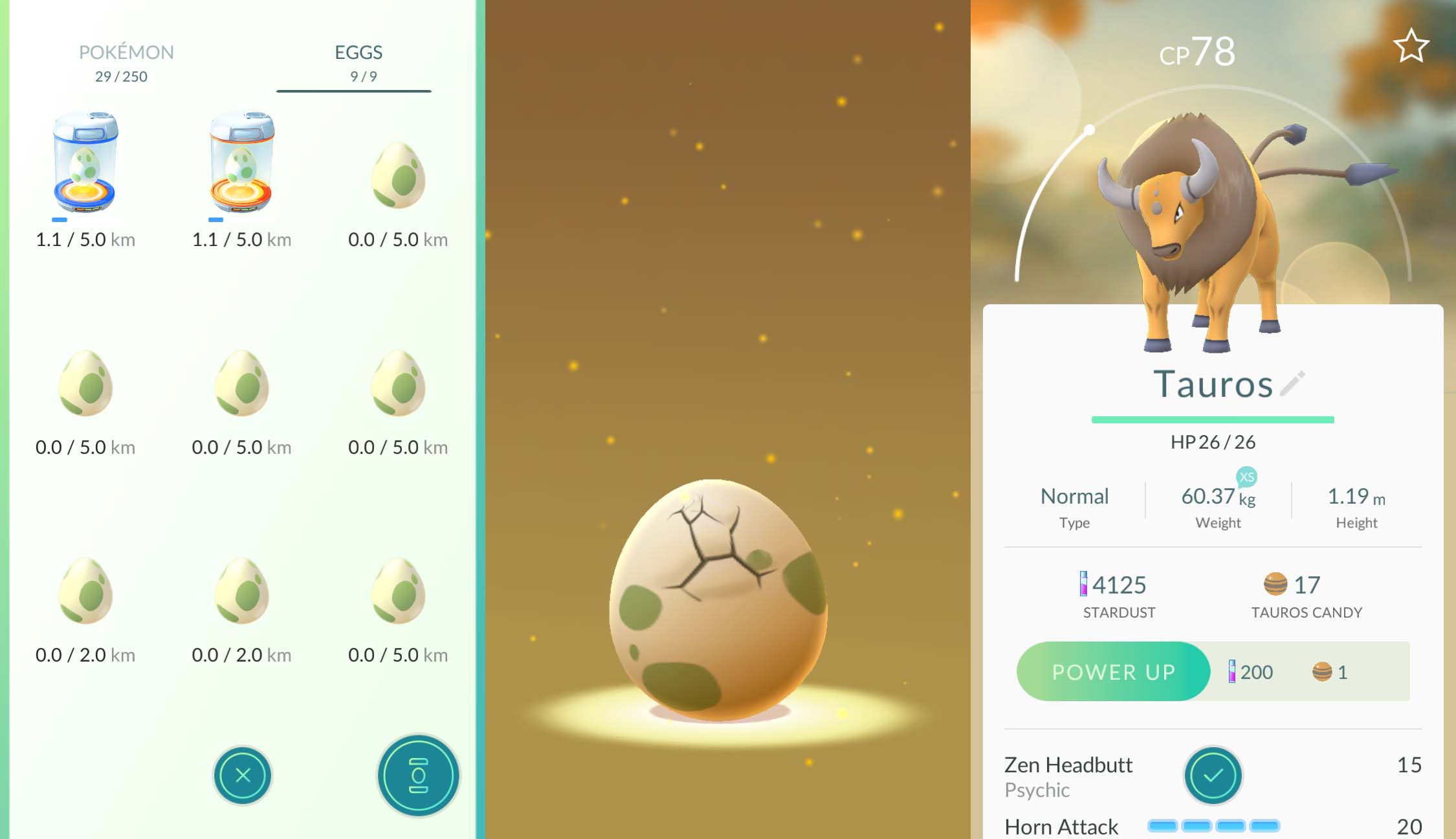 Inside was a Tauros, who gave me a whopping 17 Tauros candies. It's a real shame they don't evolve.

On another hatch, I wound up with a flopping Magikarp. 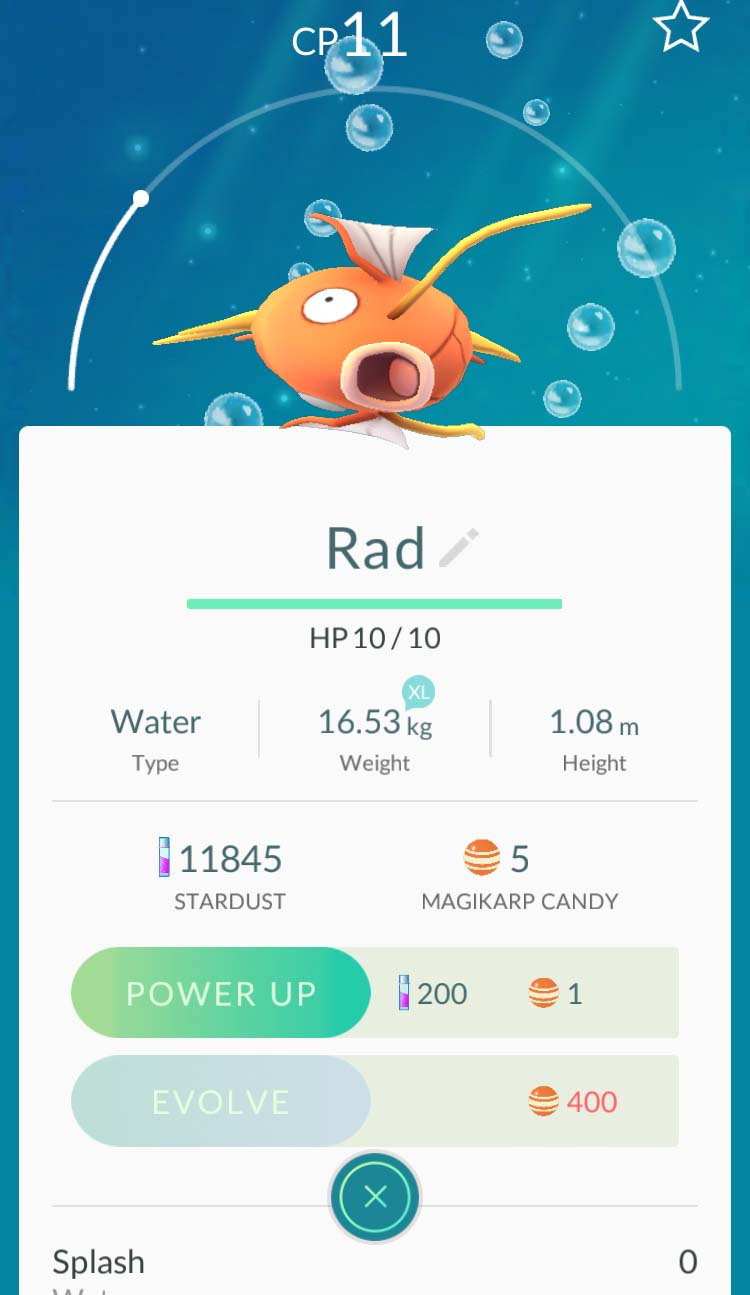 Magikarps are notoriously weak and useless, but patient trainers are rewarded in the end because Magikarps evolve into the mighty blue Gyarados.

Unfortunately, in Pokémon Go, Magikarp requires a whipping 400 Magikarp candies to evolve. He only gave me five. I'm going to be at this for a long time if I want his next form (which I desperately do).

Evolution has always been an important part of the Pokémon franchise. I couldn't wait to evolve my first Pokémon in Pokémon Go, but I couldn't go about it the traditional way.

I'd always evolved my monsters through battling and gaining experience, but now when I wanted to evolve my Geodude into Graveler, it meant I needed to collect 25 Geodude candies.

That meant catching seven Geodudes and trading them in one by one to Professor Willow for additional Geodude candies. Eventually, I did it and got to watch the magic happen. 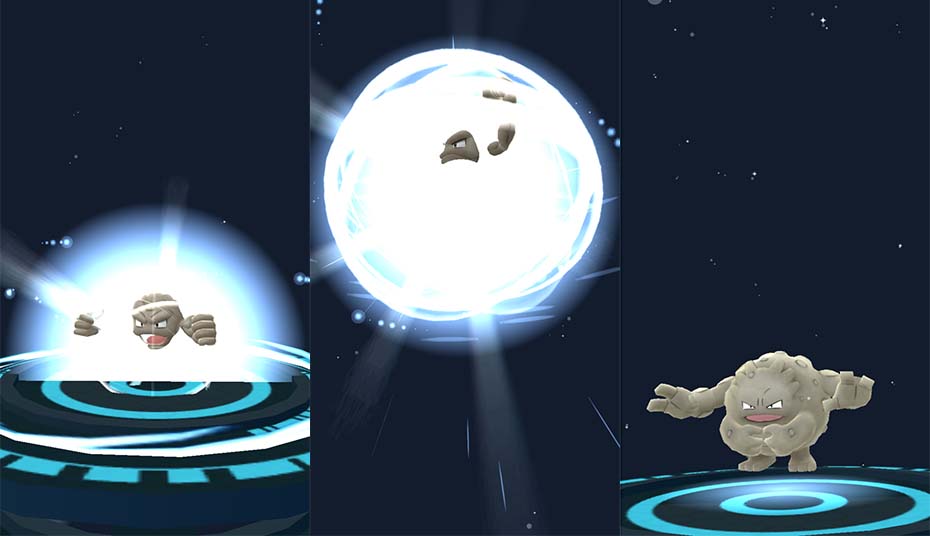 My new Graveler was much more powerful than Geodude had been. And then I saw that to evolve Graveler to his next form, Golem, I'd need an additional 100 Geodude candies. This will take a moment.

But you don't have to evolve every one of your Pokémon to catch 'em all. It's possible to catch evolved forms in the wild as well, and I even found myself catching some evolved Pokémon before I had even encountered the creature that evolves into it. 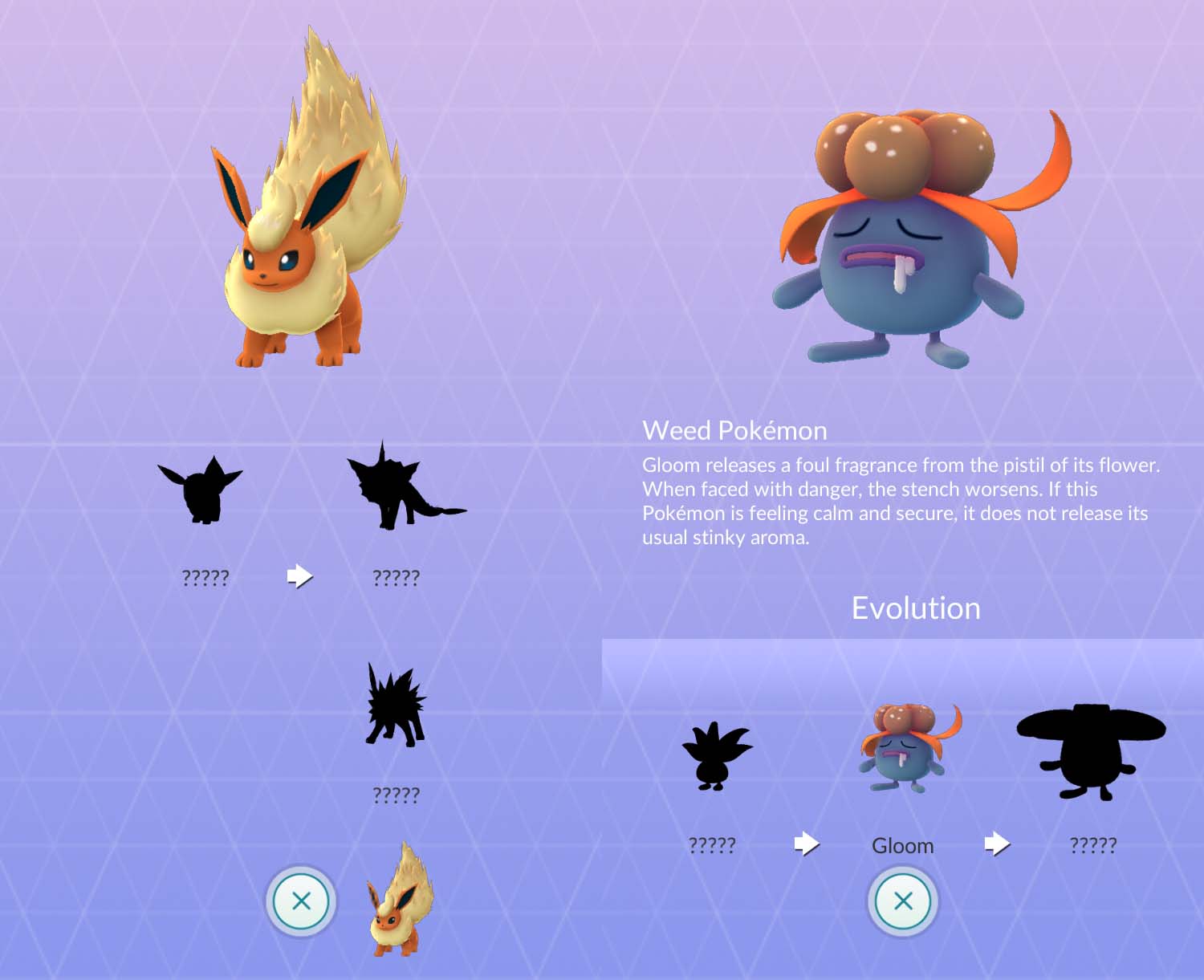 My Flareon appeared long before I started catching Eevees, and I found this Gloom a few days before I first stumbled upon an Oddish.

As I leveled up, I also seemed to start noticing more and more evolved forms appearing nearby. 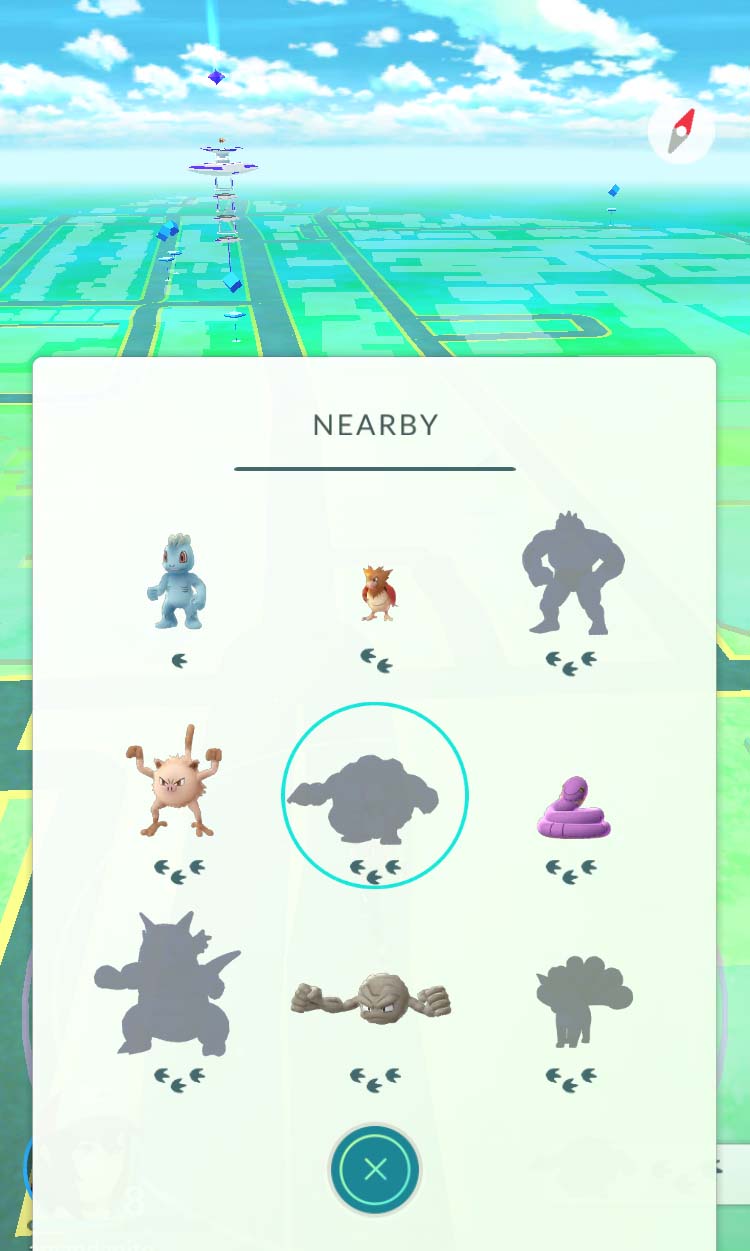 For those of you who never mastered "Who's That Pokémon?", those first three shadows belong to a Machoke, Graveler and Rhyhorn.

But I did discover a downside to catching some evolved Pokémon in the wild. Pokémon I've evolved myself are just more powerful. 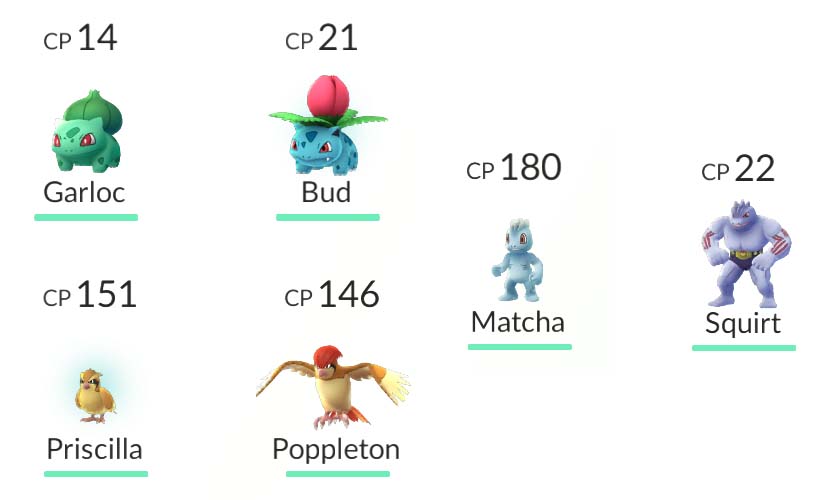 An Ivysaur I just caught is barely stronger than my starting Bulbasaur, and I'm continuing to catch first forms with higher and higher combat power. My Machop could easily kick my Machoke's butt.

When you hit level five, you can start hitting the Gym. You're also asked to pick between 3 teams: The yellow Team Instinct, the red Team Valor and the blue Team Mystic. I picked Team Mystic, because it seemed intellectual.

Like Pokéstops, Gyms are dotted around the map. I haven't played with them much because my Pokémon aren't at fighting strength just yet, but essentially you can go there to battle other Pokémon and try to claim the Gym for your team. 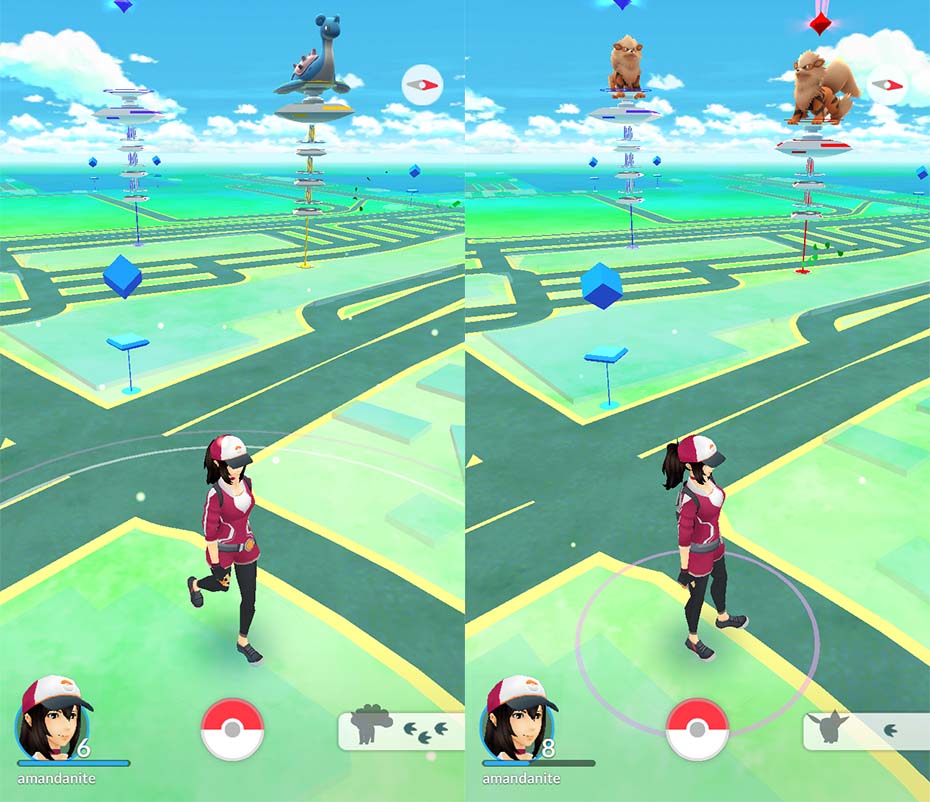 If you do manage to claim a Gym, your Pokémon can appear on top of it, flaunting your success. I use these as a kind of Pokémon dream board. Such strength! 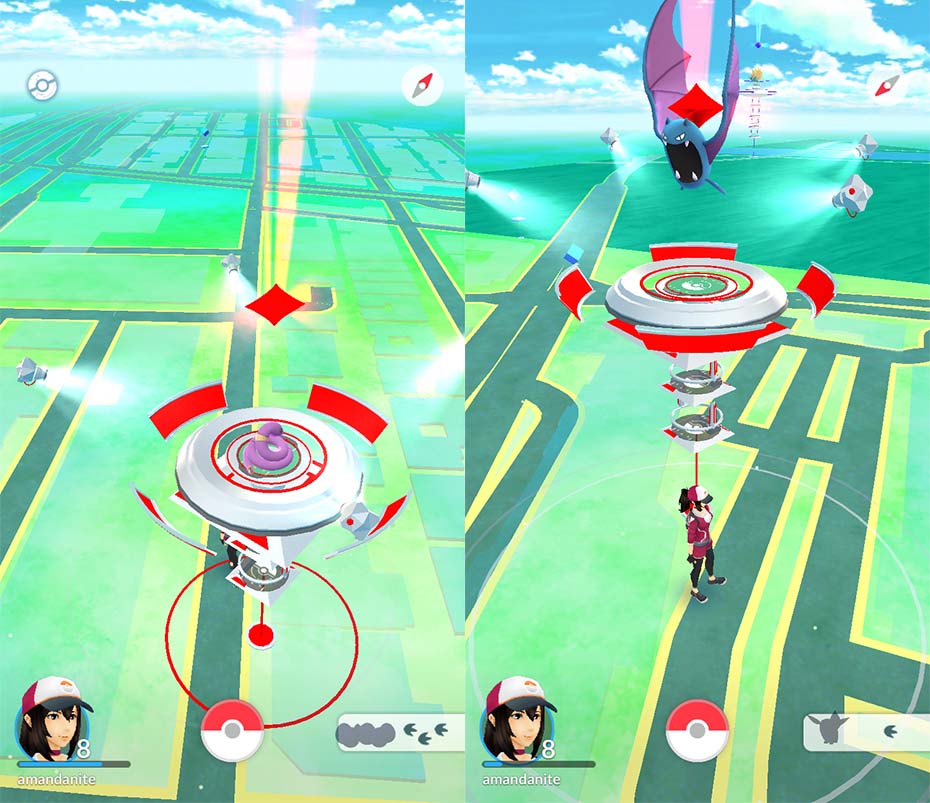 This little Ekans should be an inspiration to us all, and Golbat, the evolved form of the ubiquitous Zubat, seems to be able to hold his own, too.

I did venture off to try a Gym battle once, and it did not go well. I brought in my Pokémon with the highest combat power, a Pinsir named Pinchy, and tried to face off against an enemy Dewgong. 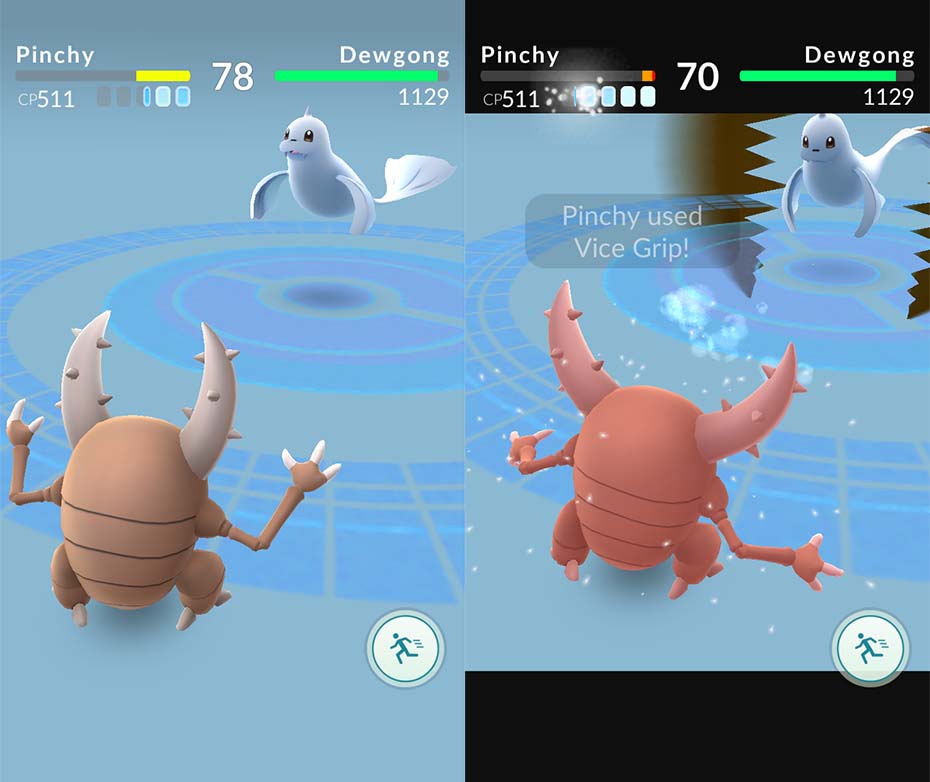 I barely made a dent before my Pinsir fainted. It'll be a while before I return to exact my revenge.

Pokémon Go only includes the first 150 Pokémon so far, but I did notice something interesting. Pokémon Go includes fairy-type Pokémon! 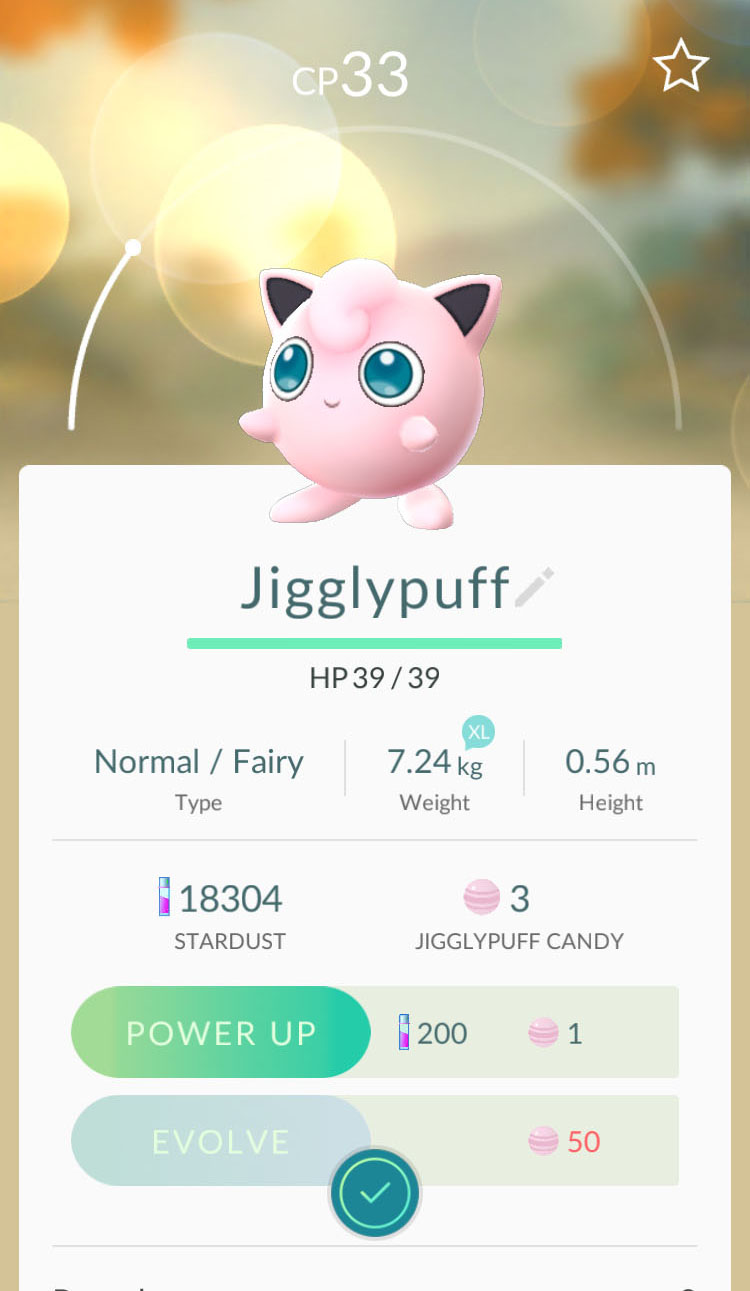 If you haven't played the games, that probably means nothing to you, but this Pokémon type wasn't introduced until just 3 years ago, so it's interesting to see the types retroactively applied to the original characters here.

Get Off Your Butt!

I'm probably healthier thanks to Pokémon Go. This game actually requires you to get out and walk around to discover new places and things, and the more new areas you investigate, the more likely you are to find Pokémon you've never seen.

The other night, I was at home when I turned on the game and saw that a majestic Arcanine was lingering nearby. I grabbed my boyfriend and we set off in search of him. 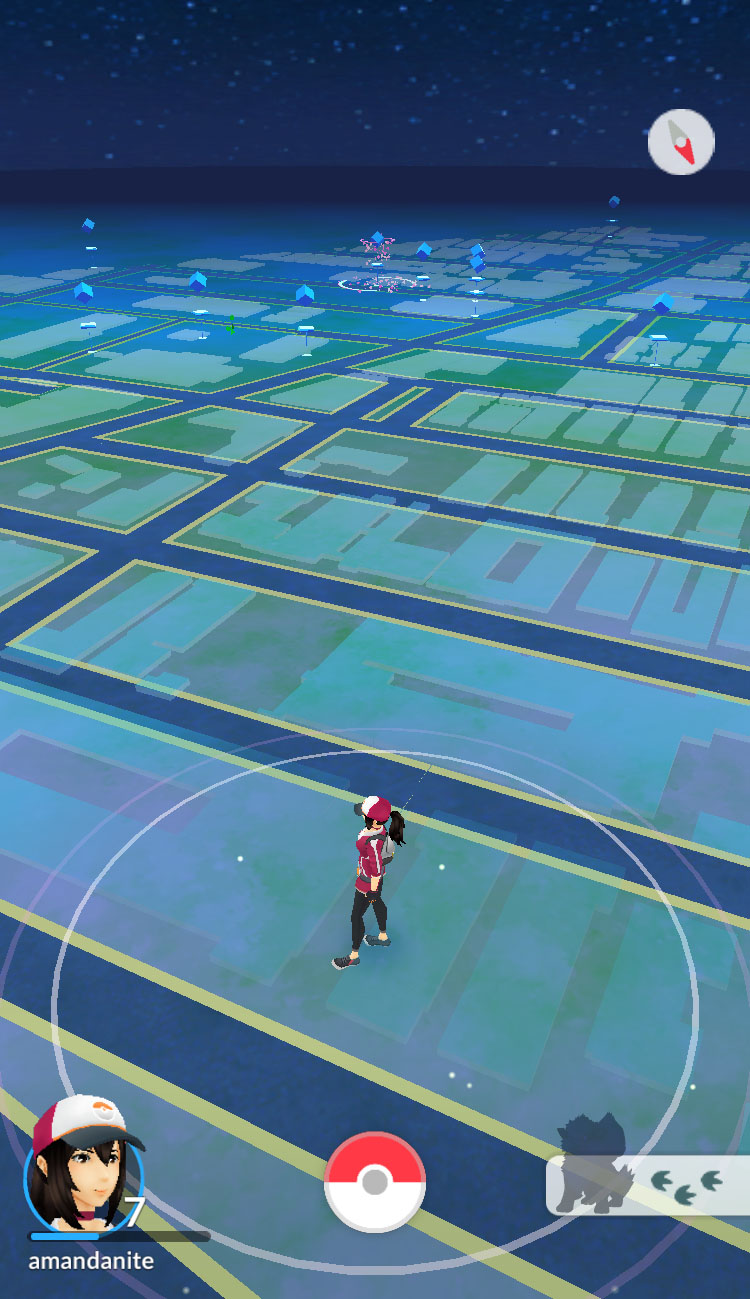 We never did find that Arcanine, but what we did see were dozens of other Pokémon Go players on their own mini adventures.

It was a lot of fun seeing other trainers and knowing we were all working toward one greater goal. This game really does bring people together.

The hunt for new Pokémon has also helped me discover new restaurants I need to try and a giant park within walking distance of my apartment, which I might have never discovered without this game.

If I just hatch an Egg every day, that's 2 km I'm walking that I probably wouldn't be walking otherwise, and that's a great thing.

This Is Me Now 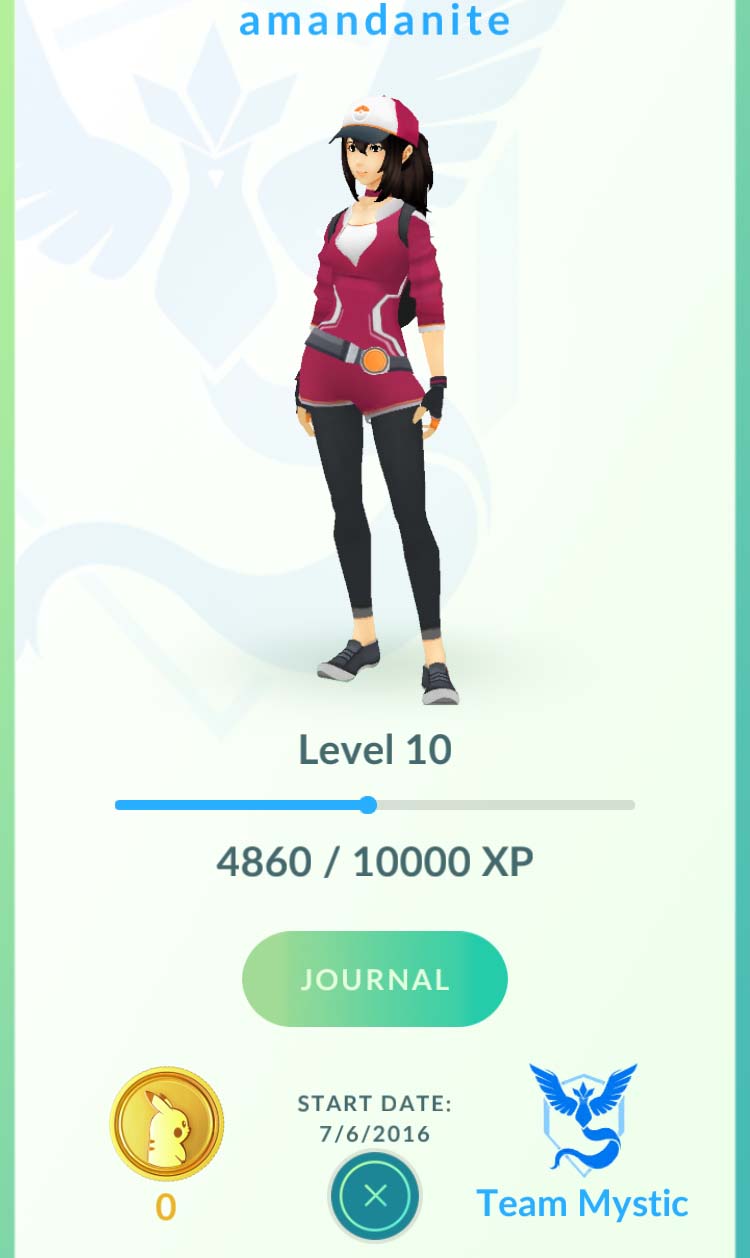 I've come a long way, but I still have a lot of progress to make before I'm a real Pokémon master.

And in case you're wondering, here's my team.

Maybe I'd be a higher level if I didn't spend so much time on nicknaming.

That first Pokémon Go trailer promised big things, and even though the game isn't exactly what I saw in that preview, I think it lives up to the hype. I haven't engaged in an epic battle against a Mewtwo alongside hundreds of other trainers just yet, but Pokémon Go has already delivered more than I could have anticipated in the feeling of community.

It's a very special thing, and I'm so glad that I'm a part of it.

A new Pokémon game is releasing this fall, and there are some adorable new critters in it that we can't wait to see in Pokémon Go. Check out the new Pokémon Sun and Moon creatures HERE!