I Spent the First 10 Hours of Pokémon: Let's Go Hunting for a Shiny Pidgey

It's not a stretch to say that the Pokémon: Let's Go were among the year's most anticipated game titles. Now that it's out, I believe all the hype was deserved.

On the Friday of the game's release date, Nintendo's publicity team was kind enough to send me review codes for the Nintendo Switch games, as well as the fantastic Poké Ball Plus controller, and I was immediately eager to hop into my next Pokémon adventure.

But as I started up the game and caught my adorable partner Eevee, I had an odd idea in the back of my head. I'd read that the new games had introduced a fresh method for encountering rare Pokémon called shinies—and I wanted one. 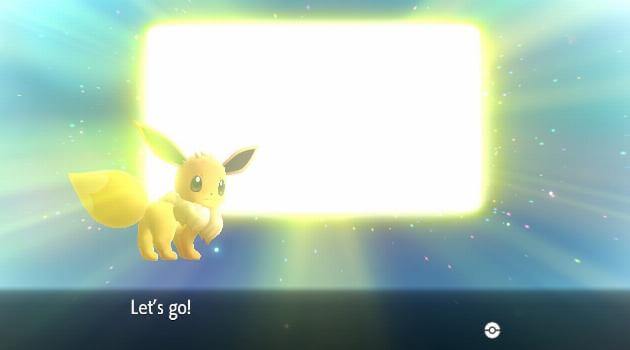 Shiny Pokémon are exactly like regular Pokémon, except that they have a unique variation in color and sparkle when they enter battle. Typically, your chances of a Pokémon being shiny are 1 in 4096, but the new method increases those odds substantially.

So as I stepped into tall grass and saw wild Pokémon roaming for the first time, I decided to make that my goal. The first Pokémon I encountered was a Pidgey, so I set out to capture a shiny Pidgey before I'd do much else in the game. That wound up being a much loftier goal than I'd initially anticipated.

To catch my shiny Pidgey, I'd have to catch Pidgeys again and again without fail to increase my Catch Combo. According to a guide that was online at the time, I could maximize my chances of finding a shiny by getting my Catch Combo up to 111. That meant running into every Pidgey I saw flapping around and catching it, while fleeing from any encounters I accidentally engaged with other Pokémon. 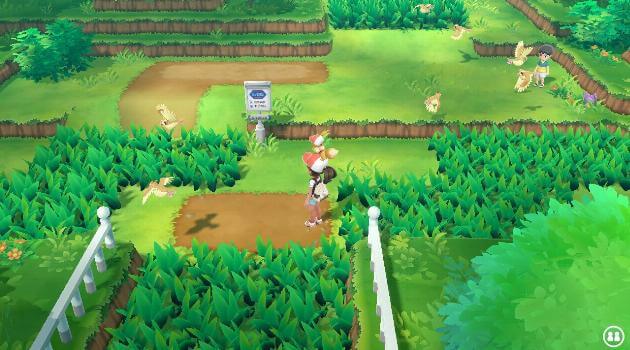 Of course, the game only starts you with 50 Poké Balls, so eventually, I had to move beyond those initial patches of grass into the next down. Once I got there, I had to run an errand before I could visit the Poké Mart to buy more. Thankfully, I gained items with each Pidgey I captured, and the bigger my Catch Combo got, the more of these valuable items I procured. Eventually, I earned enough to more than pay for the Poké Balls I needed—while the Eevee and five Pidgeys in my party gained loads of experience, and the Pidgeys evolved into Pidgeottos.

From there, I thought it might improve my odds if I kept pushing on even further, so I also made my way through the Pidgey-packed Viridian Forest. Eventually I hit my goal of 111, but there were still no shinies to be seen. Getting a little fatigued by the process, I moved past the forest into Pewter City as well. 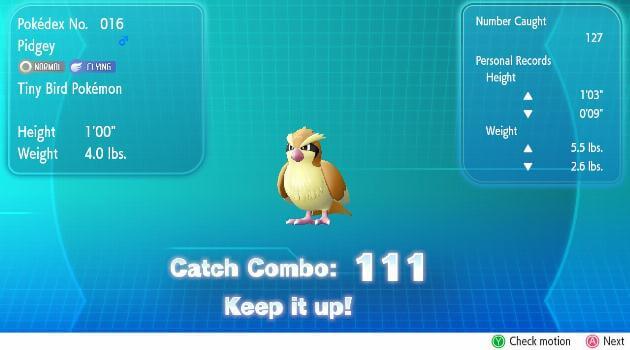 I intended to keep progressing in the game while I kept up my shiny hunting, but it was in Pewter that I came to a bit of a roadblock. I wouldn't be allowed to fight the gym leader, Brock, unless I had a grass or water-type Pokémon in my party. Seeing as I only had Eevee, Pidgeys and Pidgeottos on my team, I couldn't move forward—and there was no way I was breaking the Catch Combo do to so.

So I headed back into the forest, this time not attempting to capture more Pidgeys, but instead allowing them to spawn, fly around and disappear around me as I kept me eye out for the telltale stars that would let me know a shiny Pidgey had appeared. From time to time, I'd bump into more Pidgeys, and I'd have to catch them so my streak wouldn't break.

When my Catch Combo was more than 200 and I began to get a little frustrated with the experience, I finally saw those sparkling stars surround a wild Pokémon. After more than 10 hours in the game, many of them spent traipsing through Viridian Forest, it was finally there. But to my complete surprise, it wasn't the Pidgey I'd been searching for, but a tiny caterpillar-like Weedle. 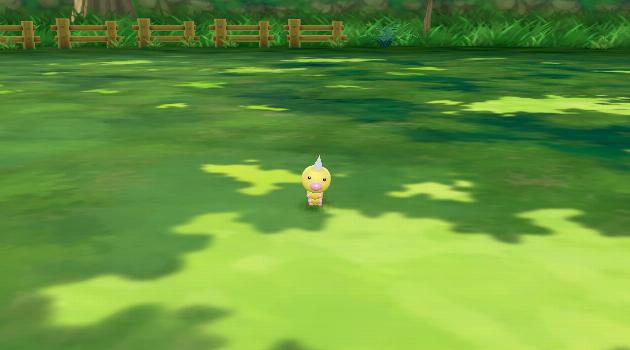 It wasn't what I expected, but I was still thrilled. I immediately ran into battle with the bug, tossed a Razz Berry to increase my chances of a successful capture, and threw a Poké Ball. Within moments, Weedle was mine.

Shiny Weedle doesn't look that much different to a regular one, but I didn't care. I quickly evolved it into a Kakuna, and then a tough-looking Beedrill, whose green-tinged skin and blue compound eyes set it apart from your run-of-the-mill Beedrills. 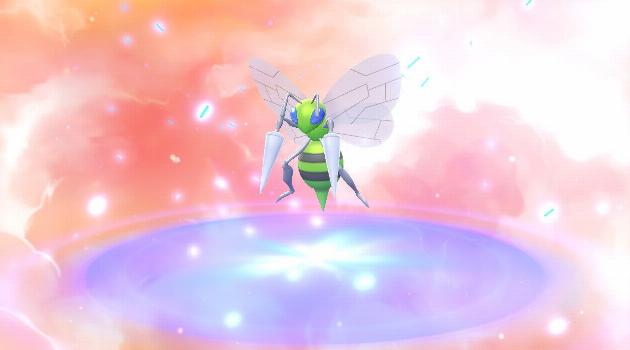 Even though I didn't wind up with my shiny Pidgey, I was pleased with the results. That's in spite of the fact that I later discovered I only needed a Catch Combo of 31, if I'm to believe trusted Pokémon fansite Serebii.

With my Catch Combo finally broken, I was also able to finally capture a Bulbasaur and take on Brock in Pewter. I'm not a few towns ahead in my Pokémon journey, but that doesn't mean I won't return to my shiny-hunting ways before too long. 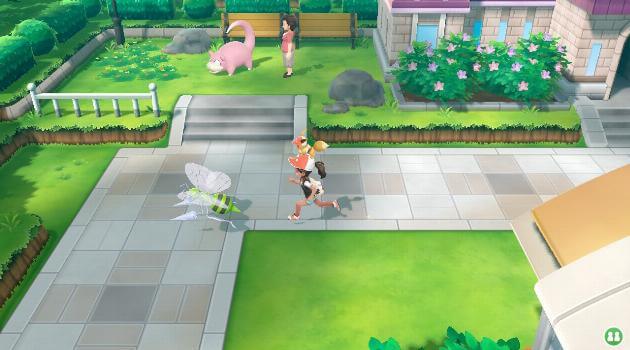 If you're not quite ready to spend 10 hours trying to find one Pokémon, click HERE to find out which Kanto region Pokémon you are, based on your zodiac sign.