Pokémon Mystery Dungeon: Rescue Team DX is the remake we never knew we needed. It's cute, approachable and packed with our favorite early generation Pokémon—but there can also be a lot to learn for fans new to dungeon crawlers.

Nintendo was generous enough to provide us with a key for the game on the Nintendo Switch, and we've been completely obsessed. We've learned quite a bit in our many hours with the game, and we'd like to share a list of the top tips that'll help you become a Mystery Dungeon master in no time.

Round Out Your Team

Before you do anything else in Pokémon Mystery Dungeon DX, you'll take a little personality quiz that assigns you one of 16 starter Pokémon. While we think it's fun to go with the assigned Pokémon (we got Torchic, by the way), you're allowed to pick any Pokémon that's your favorite. Whether you make your selection based on cuteness, or moves, or strength, remember that this Pokémon will be seeing you through your adventure, so you should choose wisely.

From there, you'll be asked to choose a partner Pokémon from the remaining list of 15, and you'll want to do this strategically. Even if you're really into fire types, for example, it's unwise to pick two because it'll put you at a disadvantage on your adventures. Instead, pick a second Pokémon that supports your first—for example, a grass-type Pokémon to back up your fire-type Pokémon's weakness to water. Eventually, you'll be able to have up to three Pokémon on your team at once, so focus on balance and having options for whatever opponents your team might come up against. 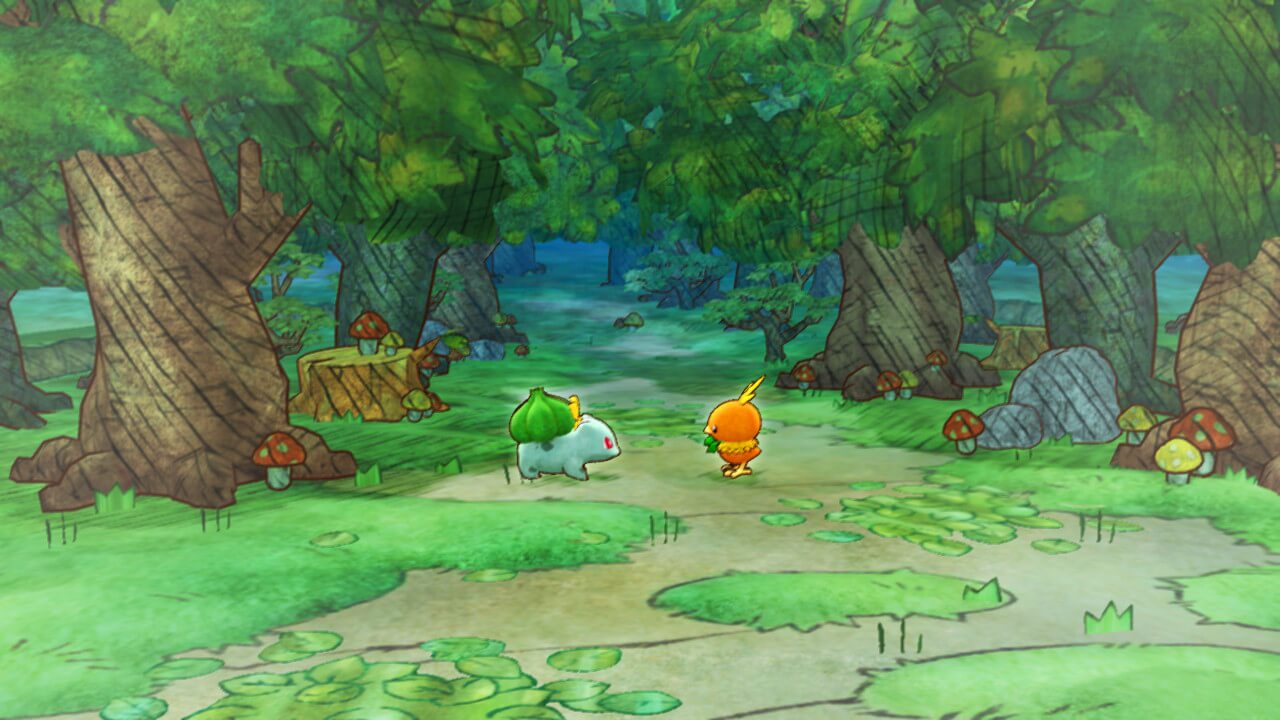 By holding the L button, you can put your adventures into Auto Mode, which is a big help. You might think it would take some of the fun out of the game to not choose your own movements through the world, but we've found that Auto Mode speeds things up and gets us to more gameplay, more quickly, making it even more enjoyable. If you set it to Finding the Stairs, it'll haul your team through the shortest route to the exit, but set to Exploring, it carves out the most efficient path through the current floor to pick up all of the goodies on the way there. When you're in trouble, head to that staircase. The rest of the time, explore a bit to stock up on items and level up your Pokémon by fighting the enemies you encounter. It'll save you time and make you love the game even more.

Part of mastering Pokémon Mystery Dungeon DX involves really understanding your moves and how to make the most of them. Get to know your attacks and how far they can reach, and the best place to position yourself to get in the hits you want. You can also strategically make space between you and the enemy to get them to walk exactly where you need them. Knowing your enemies can also help you evade their attacks masterfully—especially by using the R button to move diagonally.

You may also want to sometimes take control of the moves your partner Pokémon use. After all, you don't want them wasting all of the PP of their best moves on Pokémon you can easily take down together. Hold ZR and press right on the d-pad to access Move Settings and choose which ones they can and can't utilize at any moment during your adventure.

Use the Y Button to Face Your Opponent

If you're not facing your opponent, you can't attack them. Fortunately, you don't have to waste a move walking toward your enemy in order to get yourself looking in the right direction, and instead simply have to press the Y button. Once you're in position and facing the enemy Pokémon, the A button will utilize your most effective attack against them, based on the moves available and their ranges. Plus, if you ever find yourself cornered by multiple enemies, the Y button will also allow you to swap between facing different baddies in an instant. Use that to your advantage to take them all down. 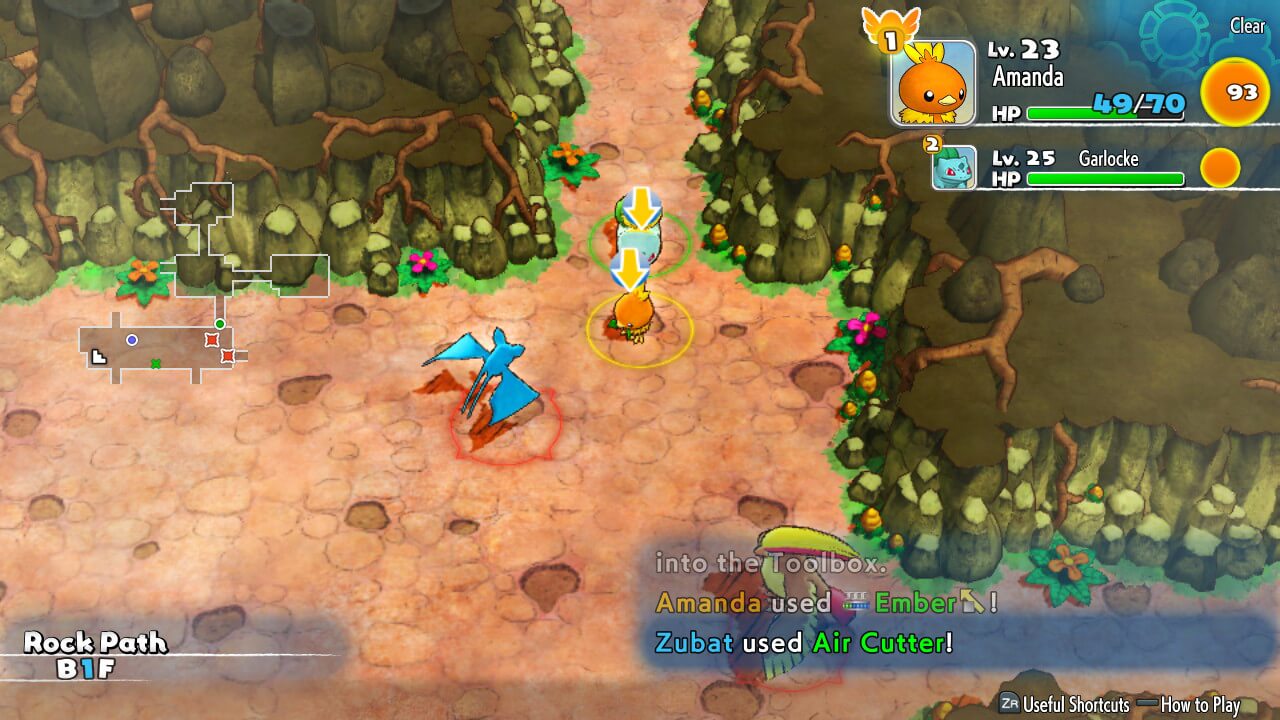 You'll want to be careful on your adventures through dungeons, because defeat means losing all of the cash and items currently in your inventory. While you'll want to keep some money on you for potential purchases of needed items, it may be wise to deposit the rest into Felicity Bank, run by a Persian in Pokémon Square. Using the bank will also give you free items daily, so don't forget to visit. Kangaskhan Storage serves a similar purpose, allowing you to hold any items you won't need for your next adventure for safekeeping.

Your inventory in the game is limited, so you'll have to manage your items wisely. Stock up too much, and you won't have any room left over for valuables you might find during your adventures. Depending on your personal strategies, you'll likely want to prioritize different items, but we always think it's a good idea to have Oran Berries handy for healing, as well as Max Ethers or Max Elixirs for long dungeons where you're likely to run out of PP for your moves, as well as Reviver Seeds for dealing with a fainted Pokémon. Depending on the environment, you may also find that certain items become more valuable. For example, if you're exploring a fiery volcano, you may want to carry extra Rawsy Berries to heal potential burns.

It can also be very handy to carry items such as Lasso Orbs, Petrify Orbs and Slumber Orbs, which affect all enemies in a room. When you're overwhelmed by attackers, it can be invaluable to have an item that can stop them all in their tracks so you can focus on whittling them down, one at a time. 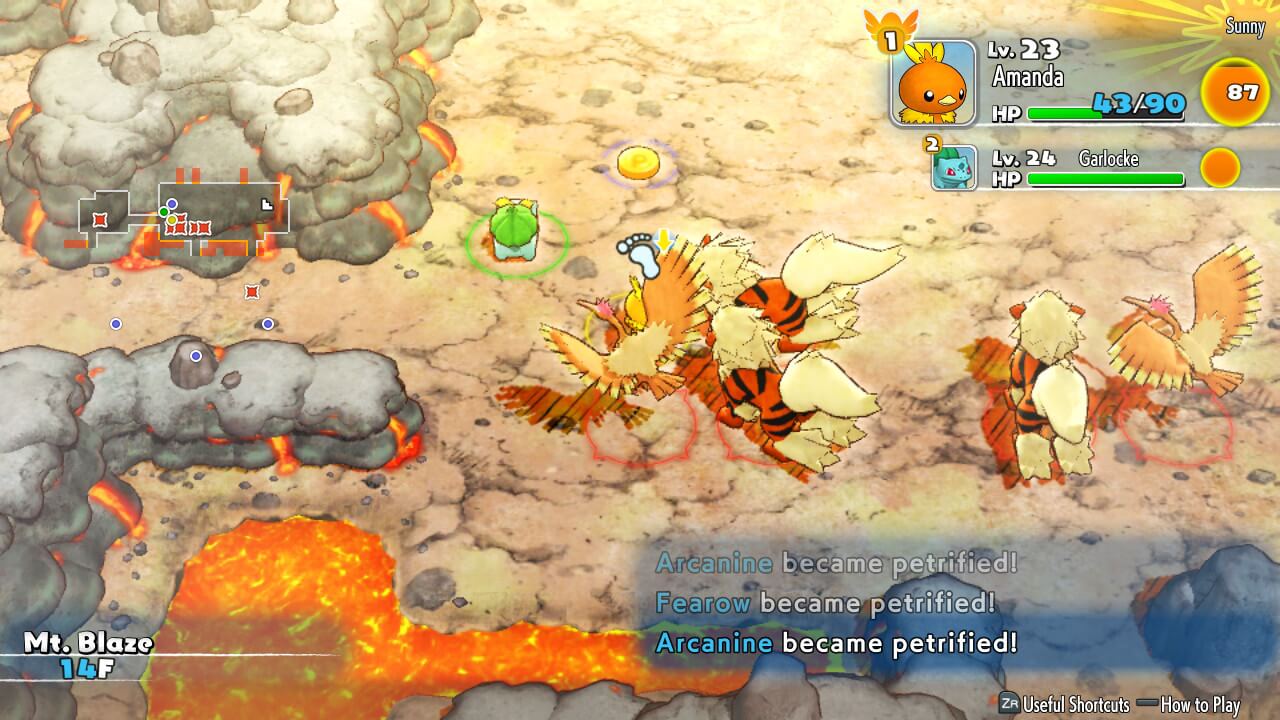 You might have noticed we didn't mention Apples in the list above. As you explore a dungeon, your leading Pokémon's fullness level depletes, and when it gets to zero, you'll start losing HP when you move around. Apples are a tasty treat that can replenish your Pokémon's belly and prevent this, but you don't want to use up one of your items, there's a workaround.

By pressing the + button, you can swap the other Pokémon in charge and start controlling a different member of your team. The follower Pokémon don't get hungry as they explore, so their belly will still be full, giving you up to three times as much exploring time. Plus, it can also be wise to swap between your Pokémon as you explore to take on different challenges with different abilities. Then, when your whole team is hungry, you can start thinking about chomping those apples down.

By registering items like Gravelrocks and Geo Pebbles, you can make it so that you don't have to go into your item menu to utilize them. When you're facing an enemy that's far away, all you have to do is press ZL and ZR at the same time to unleash a long-distance attack. Not only is this especially handy for when you're running low on PP for your ranged attacks, but it makes it so that your buddies can use these items, too. Sometimes, they'll even start fighting an unseen enemy before you even notice them, giving you an awesome head start.

Every Pokémon can be equipped with a wearable item, so don't miss out on the chance to boost their stats or buffs. Whenever you stumble upon one of these handy items, go to the menu and equip them as a held item in the Pokémon Square. You might find that one of these can make the difference between failure and victory as you explore.

You should always accept as many job requests as possible from the mailbox in front of Team Base and the bulletin board next to the Pelipper Post Office, because multiple jobs can be completed at once. When you go to the Select Destination screen, focus on the locations that have the highest number of requests next to them. Fulfilling those requests will net you the most rewards while also saving you valuable time and energy. Why return five times when you can clear them all in one go? 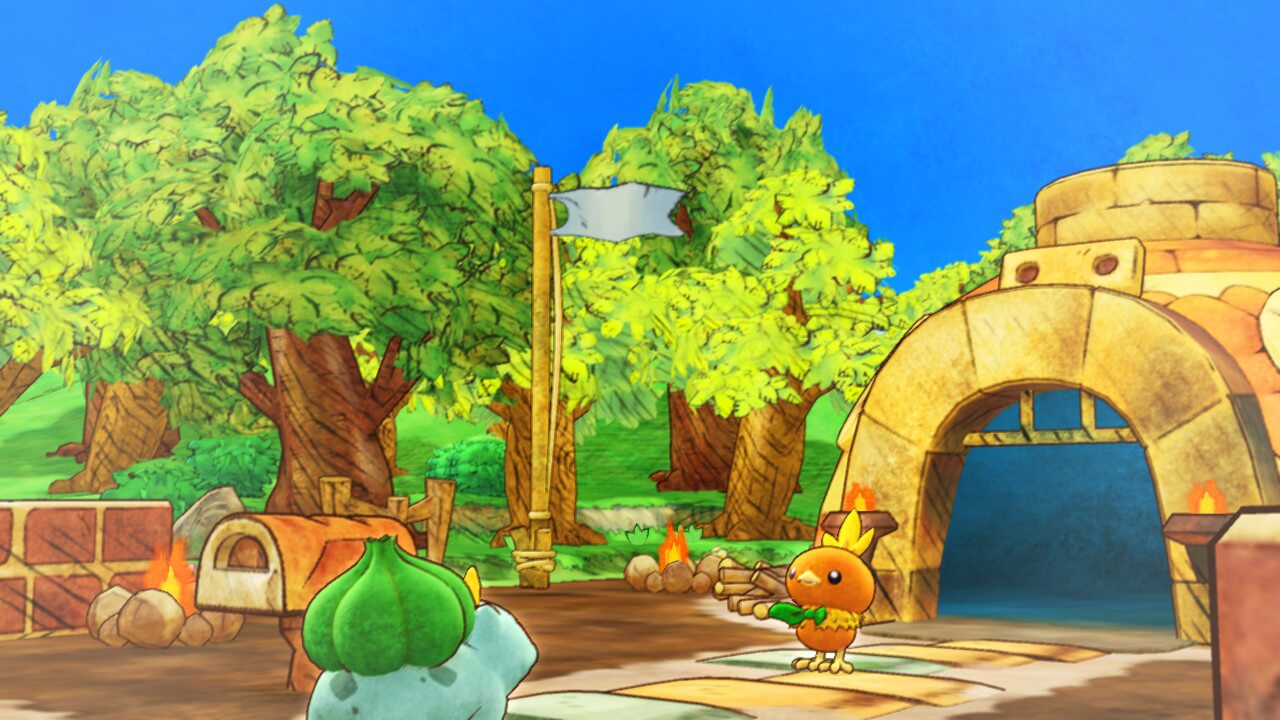 Use Those Dojo Tickets

During your adventures, you'll collect Dojo Tickets which can be exchanged for training sessions at Makuhita's Dojo in Pokémon Square. These Dojo Drills allow you to earn experience at an accelerated rate, helping you boost up the levels of your teammates. The better the ticket, the more time you'll get to train in the dojo, and the more experience you'll get. And while you're there, you should also take part in Makuhita's Tricks of the Trade tasks. These training sessions are easy to complete, and the rewards they grant you for completion are more than worth the trouble. 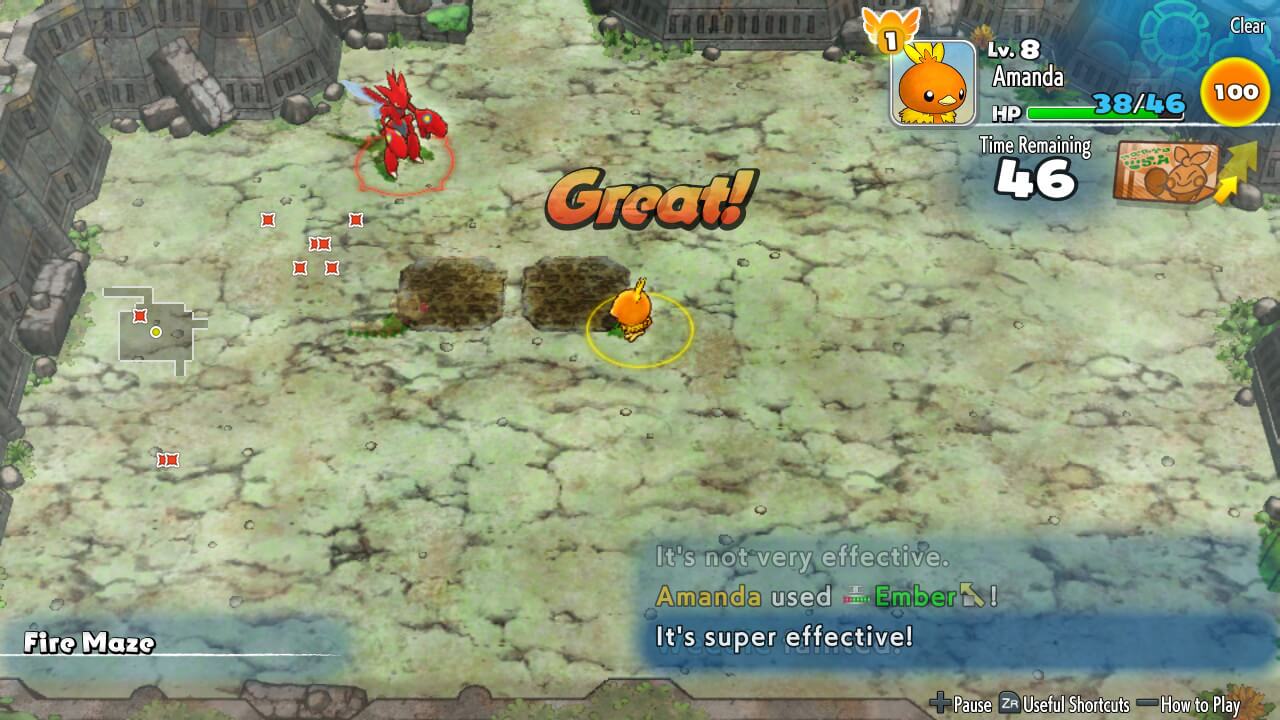 At Wigglytuff's Camp Corner, you can spend your hard-earned money to unlock camps. You'll want to purchase as many of these camps as you can, because they'll allow you to start recruiting wild Pokémon as friends and add them to your team. Certain Pokémon belong to certain camps, and if you haven't unlocked the camp associated with that Pokémon, that will mean you won't be able to bring it home once the dungeon is completed. Instead of being heartbroken when you don't have the proper camp for the Pokémon you've been desiring (or worse, a shiny Pokémon), carry a Wigglytuff Orb, which allows you to purchase camps from Wigglytuff even on the go. If you've got the cash, you'll be able to befriend that Pokémon permanently and not have to regret missing out on it. 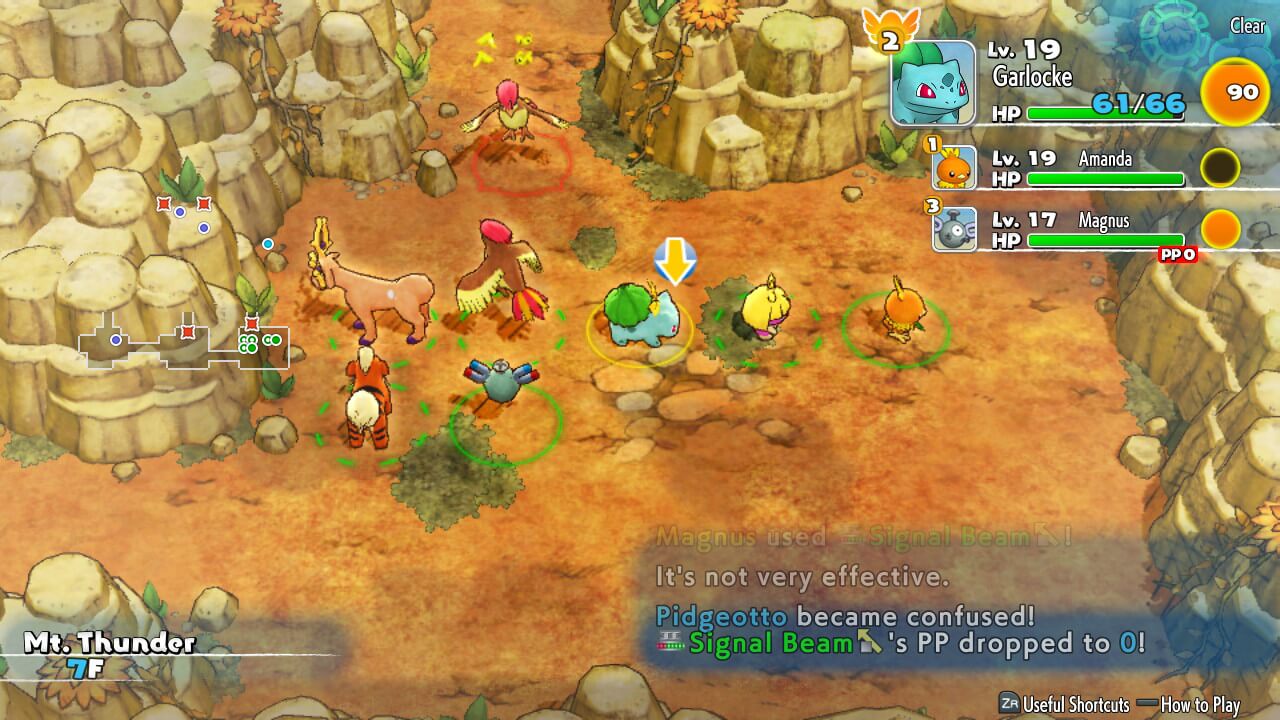 Love the series? Click HERE to find out why we're still obsessed with Pokémon: Sword and Shield.