Pokémon Quest is a free-to-play but way too addictive game on iOS, Android and Nintendo Switch.

The game is a ton of fun and seriously hard to put down (even while we're waiting for more turns to recharge), but getting into it can be a little intimidating. If you're not sure where to start, follow these tips to become a Pokémon Quest master in no time.

Don't Be Afraid to Use a Recipe Guide

While it might seem like cheating to head to the internet for a Pokémon Quest recipe guide, it's pretty essential to succeeding quickly in the game. After all, you don't want to waste all your valuable ingredients on recipes that lure in Pokémon you never wanted in the first place.

In the beginning, it's fine to experiment a little by combining ingredients to get new recipes, but when you're getting serious, you'll want to use recipes that will help you advance—especially when you use better Cooking Pots that need more ingredients to create stronger Pokémon. We like this guide from Prima Games. 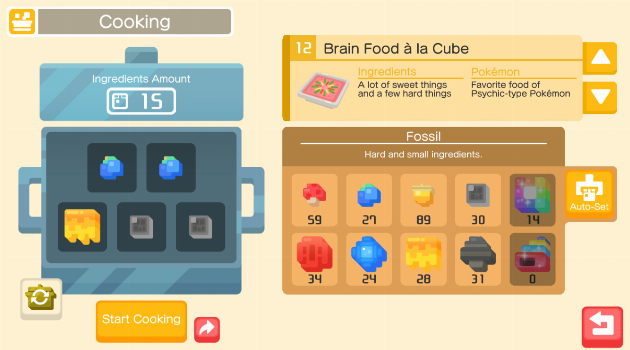 Go After the Ingredients You Need

Certain Pokémon like recipes cooked with certain ingredients, so if you're going after someone specific, you'll need to collect the ingredients they like. Thankfully, item drops in levels aren't random. To the right of each level's name is a donut chart that shows the breakdown of ingredients found within the level, based on color. So if you need lots of yellow ingredients, visit a level where the yellow part of the chart is largest to get those items faster. 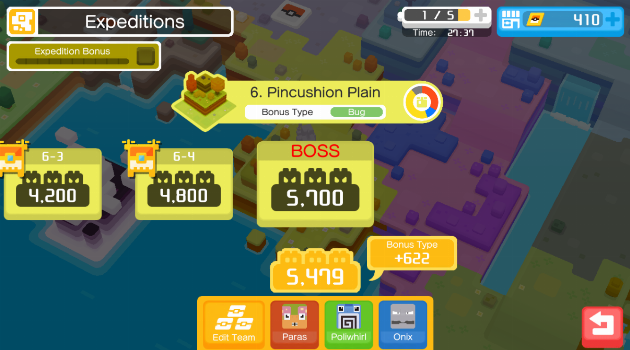 Each Pokémon in Pokémon Quest has special slots where Power Charms can be equipped. These slots can accommodate either HP-increasing Sturdy Stones or attack-heightening Mighty Stones—and if you're lucky, you'll have a slot that can hold either. Equipping Power Charms massively increases the stats of your Pokémon, and as your continue on your adventure, you'll get better and better stones, so you can always improve your Pokémon. As Pokémon level-up, more slots are unlocked so they can hold more Power Charms.

If you get three Power Charms in a row on your three-by-three grid, you'll also get a Bingo Bonus. These bonuses can range from extra critical hit damage to better move regeneration, which can have a big impact on your success on your adventures. 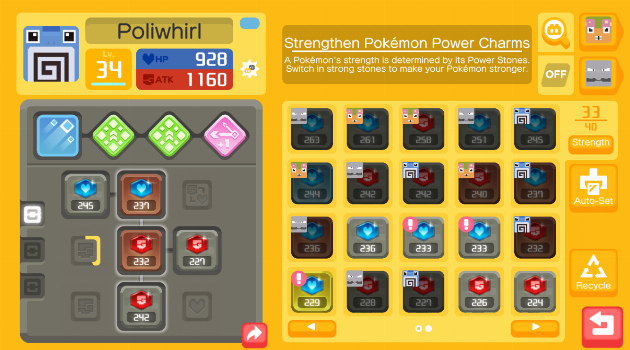 At some point in Pokémon Quest, you'll probably hit a wall. Your team just won't be powerful enough to take on a full level of enemies—and that's okay. When this happens, try repeating the toughest level you know you can beat. Completing the level again and again will help you farm items and collect stronger Power Charms so you can make the Pokémon on your team tougher while they also gain experience and level up. Eventually, you'll find that you have the strength to conquer the foes that were giving you a hard time. 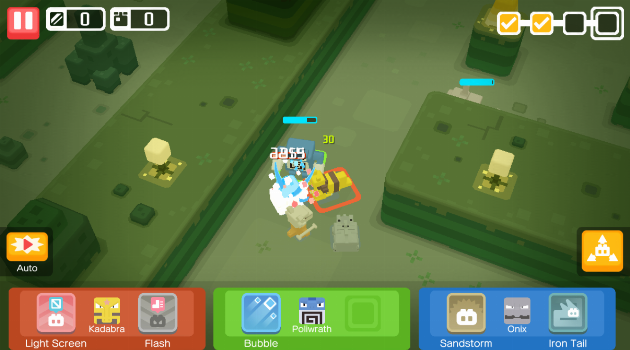 Play Consistently and Use Items Wisely

Pokémon Quest is a freemium game, so you can't just sit down and play whenever you feel like it. Essentially, you can play as long as the in-game battery still has a charge. This battery can hold five charges, and every time you go on an expedition, one of those charges is used up. It takes half an hour for the battery to recover one charge.

That means that if you don't play for more than two and a half hours, you're missing out on turns you could have taken. Obviously, you can't be playing all the time, but it's one thing to keep in mind if you want to progress quickly. Don't let those turns go to waste!

Playing daily ensures that you get certain in-game bonuses as well. For example, every 22 hours, a stray Pokémon arrives at your Base Camp for you to add to your team. The Poké Mart will also reward you with free PM Tickets daily.

Speaking of PM Tickets, don't go spending them willy-nilly. Though they can be used to speed up cooking or the charge time on the battery, they're better used for buying Base Camp decorations with useful effects. 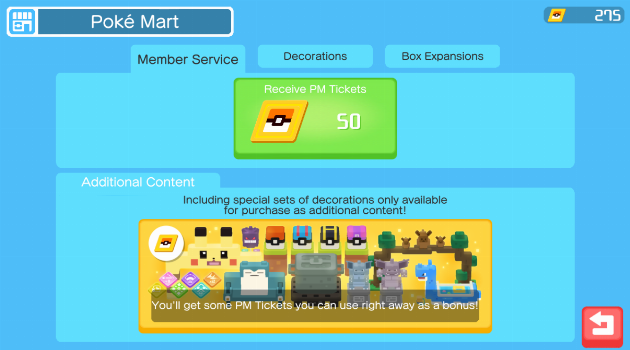 Decorate Your Base Camp

Base Camp decorations aren't just cosmetic. They also have super useful effects, so don't forget to place them as soon as you get them. You'll collect statues that boost the Pokémon experience when you beat the boss of each group of levels, and other decorations can be purchased from the Poké Mart for PM Tickets. Save your PM Tickets for the decorations you think will be most useful and place them to reap the benefits. 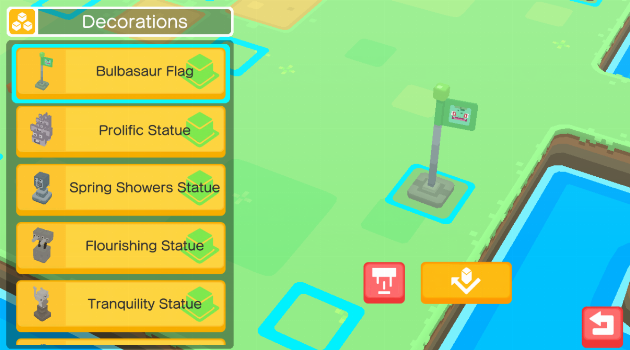 Playing regularly doesn't mean you have to be tuned in all the time. When you're busy, set your Pokémon to handle a level automatically. Put them into a level you know they can complete on their own, and tap the screen every once in a while to keep it from going dark and pausing the adventure.

Of course, when you can play more actively, your Pokémon will fare much better in battle. Pokémon Quest is mostly automatic anyway, but if you can step in to prompt them to use their moves at the best time, or scatter when they're in danger, they'll be able to beat tougher levels. 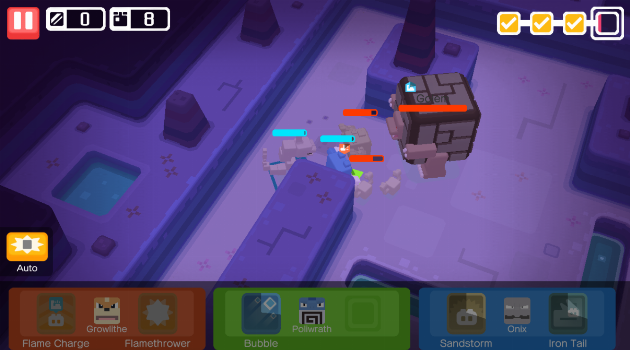 Training works pretty differently in Pokémon Quest than it does in other Pokémon games. Essentially, you can use supporting Pokémon to power up the Pokémon you want to keep on your team, but you lose those supporting Pokémon forever when you do. This is actually a super handy tool for when your list of Pokémon is starting to get full and you want to get rid of the ones you don't need.

You can use this method either to get a nice experience boost or to teach new moves to your Pokémon, which can make them exponentially more effective in battle. You'll get better results if the supporting Pokémon are the same Pokémon types, and even better ones if they're the same species or family of Pokémon. 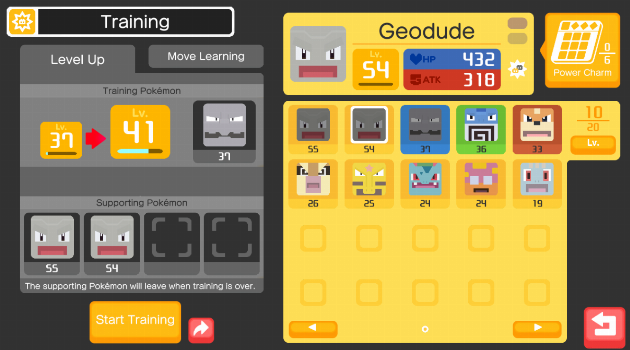 Sometimes, having strong Pokémon just isn't enough. Try composing a team of Pokémon that each brings something different to the table. For example, you might want to include Pokémon with moves that boost stats, or ones who can dole out status effects like sleep, burns and paralysis. You'll probably want to have a mix of close-range and long-range fighters on your team for every type of situation. Try playing with different types of teams until you land on whatever works best for you. 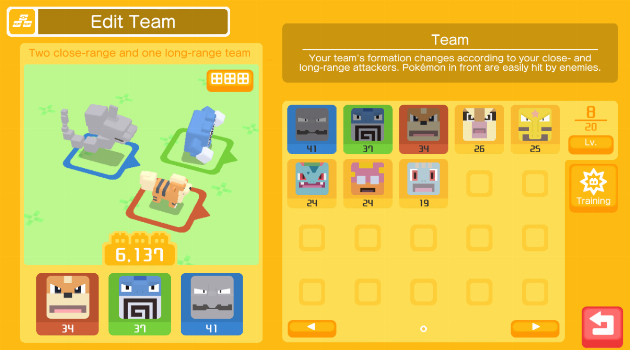 If you find that your team keeps getting wiped out at the same time by powerful enemies, try adding a strong defensive Pokémon to your team. By recruiting a tough Pokémon with tons of HP, you can keep at least one member of your team alive while the others recover after being knocked out. We find that big rock Pokémon, in particular, can take a lot of hits and keep you afloat during extra-hard boss battles. 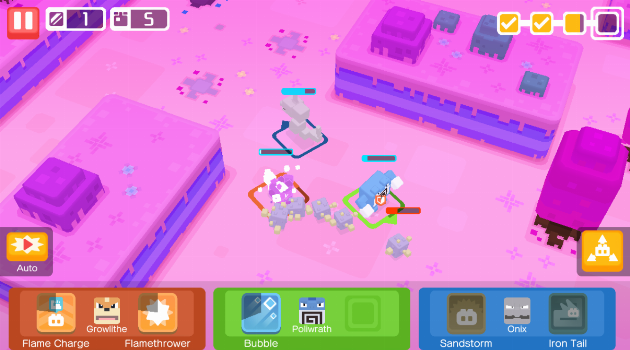 Pokémon Quest defies Pokémon tradition in a few ways, and one of them is type matchups. This game doesn't follow the classic rock-paper-scissors-style hierarchy of Pokémon types. Water isn't super effective against fire, for example. Instead, each area highlights a specific Pokémon type, which gets a strength boost there. When you're traversing these levels, be sure to put a Pokémon (or two or three) of that type on your team to maximize your power and your chances of beating them. 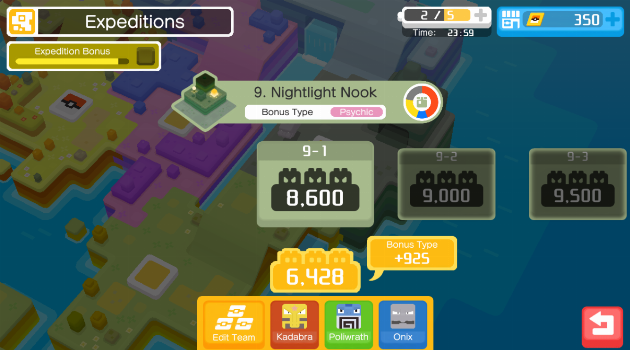 Complete Quests to Get What You Need

In Pokémon Quests, there are little objectives called Quests, and when you complete them, you get rewards, from PM Tickets to cooking ingredients to Power Charms and even charges for the battery. If there are certain items you're after, it never hurts to check the list of Main and Challenge Quests to see if you're close to nabbing any valuables. You might just have to do one little step to get whatever you need. 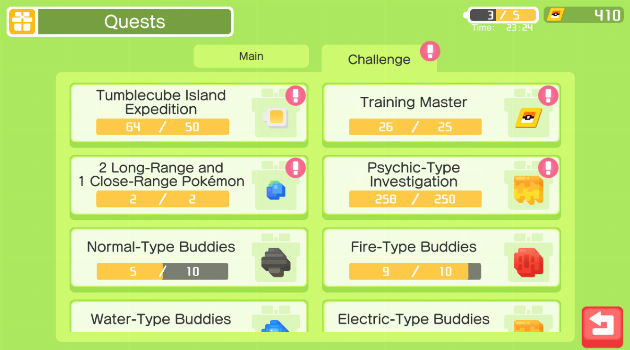 If you're super excited for the next Pokémon game on the Nintendo Switch, click HERE for our reactions to playing Pokémon: Let's Go Pikachu! hands-on.