Last week's Pokémon Presents video was full of all kinds of surprises, and it started with something completely unexpected—a Pokémon mobile game that supports healthy toothbrushing habits.

The game, Pokémon Smile, released immediately upon being announced, and though the trailer made it clear the app was designed for small children, I didn't care in the slightest. Something about it appealed to me, and I decided that if it worked for little kids, there was no reason it shouldn't work for me as well.

I downloaded the game immediately, and though I didn't get around to actually testing it out until the following night, it's since become a part of my twice-a-day brushing routine.

Pokémon Smile is a relatively simple game. Before you get started, it asks your birthday and gender (both of which you can opt-out of) and to pick a Pokémon partner from Pikachu, Eevee, Bulbasaur, Squirtle and Charmander. Since Bulbasaur is my all-time favorite starter, it was my go-to pick for my toothbrushing adventure.

From there, the app took my right into the toothbrushing game, asking me to "Brush your teeth well to save Pokémon from cavity-causing bacteria!" At the bottom of my screen, my Bulbasaur fought shadowy Pokémon engulfed in purple clouds of bacteria as they invaded my on-screen virtual teeth. At the top of the screen, I saw my own face staring back unflatteringly from my self-facing camera as I brushed—but at least I was wearing a cute augmented reality Bulbasaur hat.

All the while, the corner of the screen showed me which area of my teeth to focus on for that given moment. The game defaulted to a two-minute brush, and I was slightly surprised at how little time the game devoted to brushing the fronts of the teeth, but I brushed along to the guide anyway, and did my best to keep up with the prompts. Often, it would tell me to "brush a little faster," even though I felt it was going quite fast. It gave me little stars when I was apparently doing well, but other times warned me that I was getting too close, or that it couldn't properly see my toothbrush. 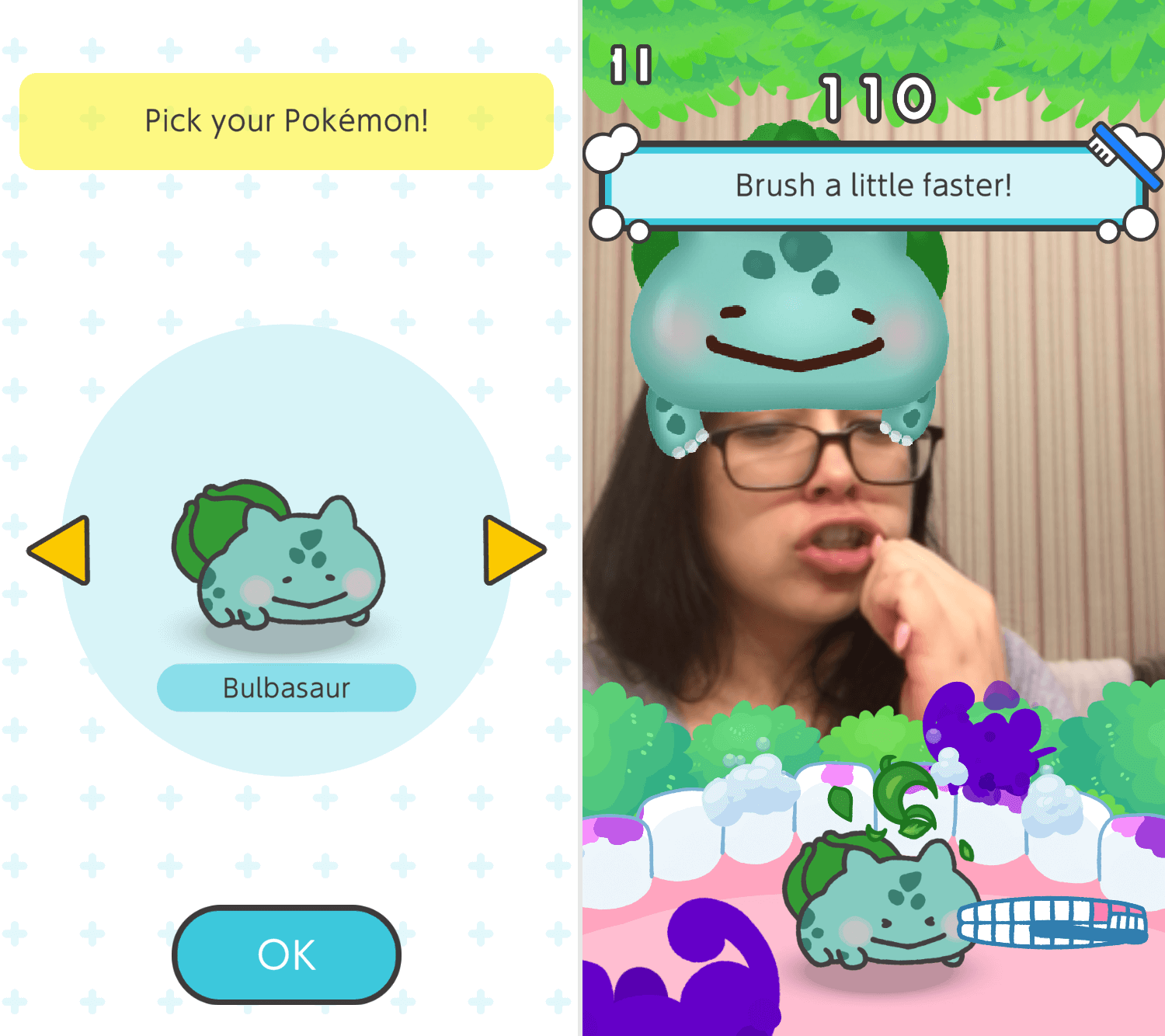 At the end of two minutes, I felt pretty good about how I'd brushed, and it gave me the opportunity to capture the attacking Pokémon, which was still engulfed in purple smoke. I threw my Poké Ball to catch it… and it unceremoniously broke out and ran away. I was a little disappointed, but it did make me kind of excited to try again the next morning and test my luck another time. While I didn't catch the Pokémon, I did get more AR hats to wear and some digital stickers, so I felt rewarded regardless. 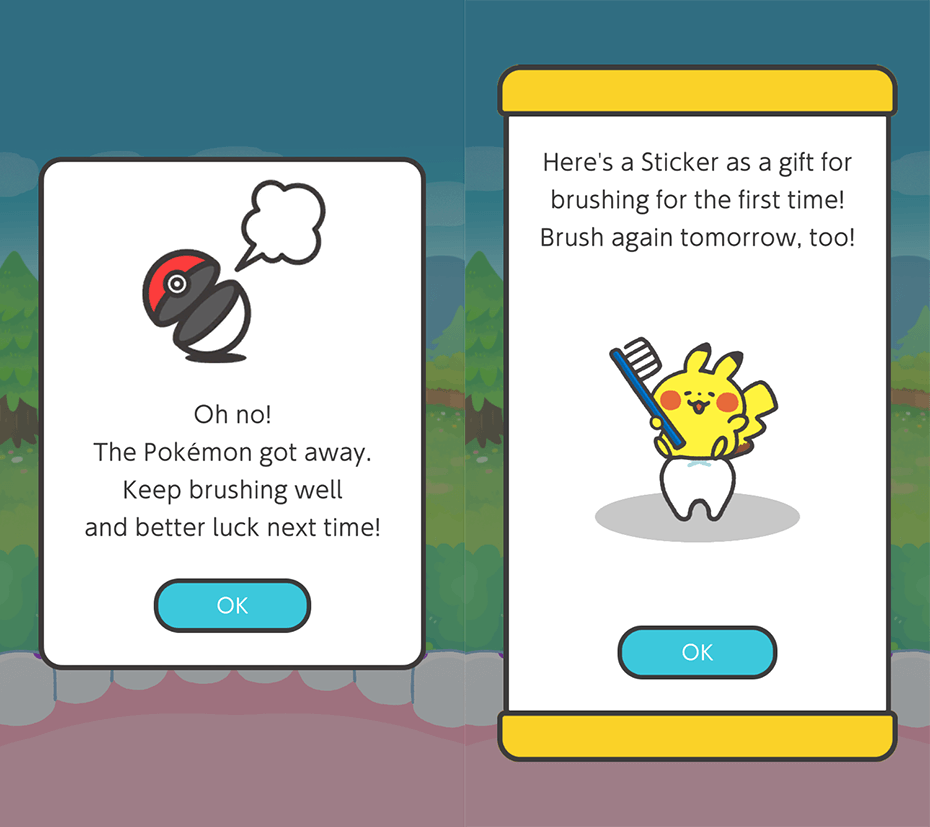 As much as I dislike seeing myself brush my own teeth in my selfie camera with toothpaste foam dribbling out of my mouth, I felt weirdly excited about coming back to Pokémon Smile the following morning. I was curious to see if I'd be able to catch the Pokémon this time around, and see if I could do anything to improve my "score."

Before I booted up the second round, though, I checked out some of the brushing settings to see what I could play around with. I decided to extend my brush time from the standard two minutes to three, for extra cleanliness, and to set a nighttime notification to remind me to play before bed. You can set up to three a day, in case you really like to brush.

When I started this time around, I noticed that the fewer times it told me to brush faster, the better I saw Bulbasaur battling against the bacteria Pokémon, and the cleaner the onscreen depiction of my teeth became. I did my best to maintain this, brushing at angles that made my toothbrush movement clearer. I also found that adding an extra minute devoted more time to certain areas, and added an extra round of brushing the front rows.

At the end of the round, the attacking Pokémon wasn't hidden behind such a thick cloud, and I could tell at a glance that it was a Jigglypuff. This time, when I threw the ball, I managed to capture it. That was one down, 150 to go. 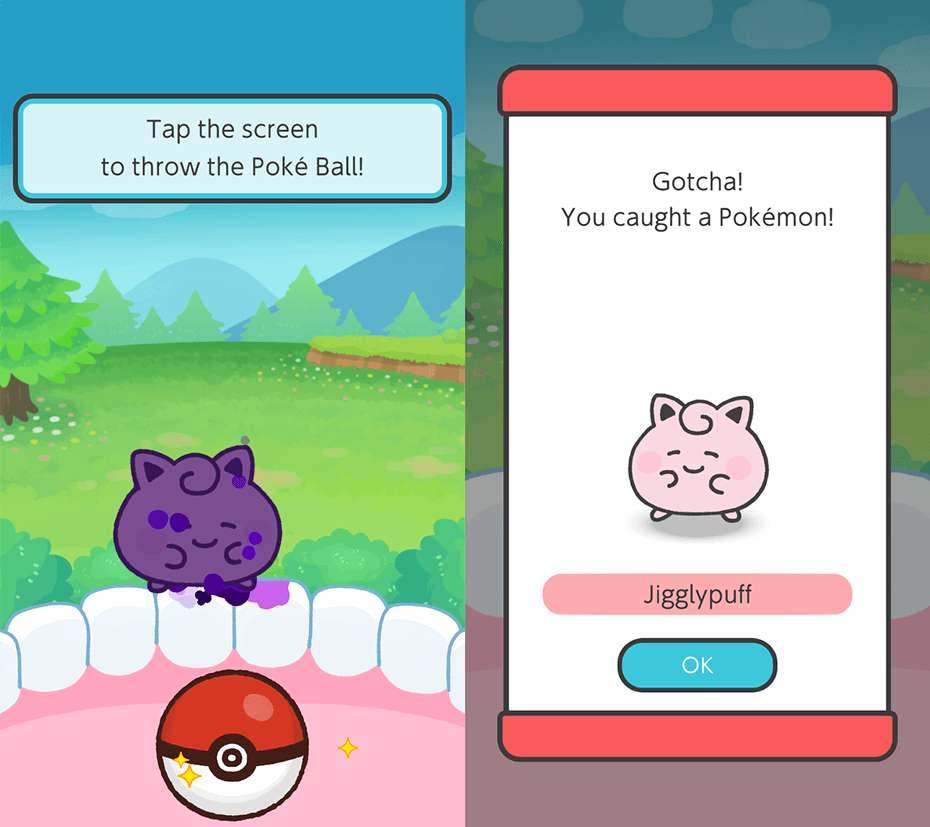 With that knowledge, I've been able to adapt the way I play (and brush). Occasionally it can be a little bit frustrating when the game doesn't seem to register my speed, and I still only manage to catch the Pokémon about every other time I brush, but the failures motivate me just as much as the successes.

On one occasion, I must have brushed my teeth so thoroughly (according to the in-game camera, at least) that it gave me a Master Ball to catch the Aerodactyl in front of me, guaranteeing 100% that I'd be able to add it to my team. I think it'd be pretty cool if that happened most times, and I plan to keep playing until I figure out what I did to do such a good job. 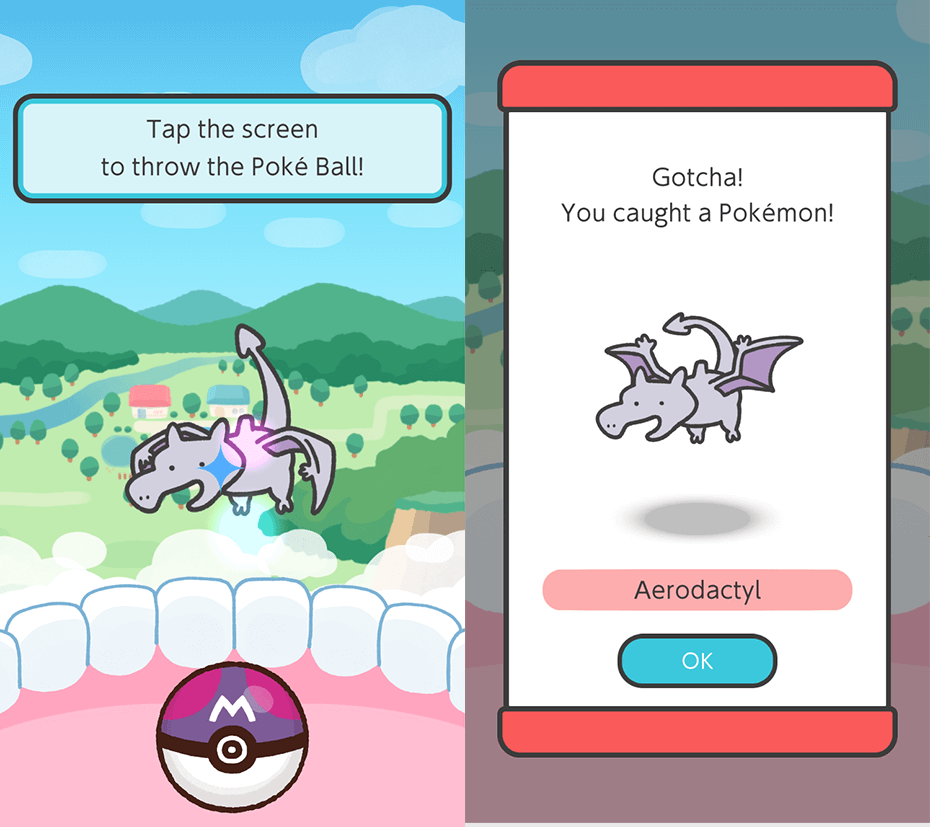 After about five days of using Pokémon Smile regularly, I do legitimately feel that my teeth are cleaner. Not only have I upped my tooth-brushing time by 50% each time I brush, but the cleansing is pretty vigorous and thorough compared to the times I zone out and lazily brush—which is probably more often than I'd like to admit.

The gamification aspect also makes me more eager to brush, which I need, on occasion. I sometimes struggle to get out of bed to brush at night when I've already gotten cozy, but the thought of getting closer to catching 'em all does propel me to practice good habits.

It also helps that the game has such a cute art style. Its simplicity is unlike anything we've really seen from an official Pokémon game, and I love everything about it. So far, I've caught six out of the 10 Pokémon I've encountered, and I've adored the look of each one. The drive to see all 151 original Pokémon in this style is one thing that keeps me coming back. 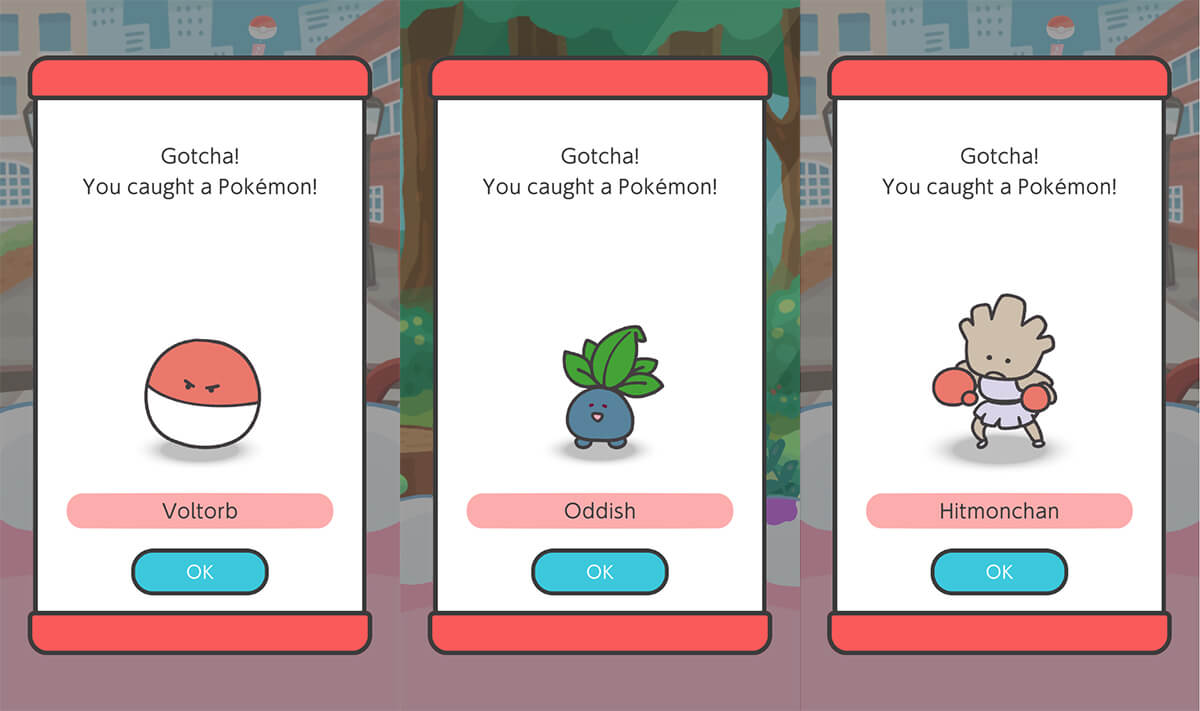 While not everyone will be drawn to the idea of catching Pokémon through toothbrushing, it is pretty effective not just as a timer, but also for focusing your brushing on certain areas of the mouth. If you don't have an electric toothbrush with a built-in timer, for example, it might be just what you need to ensure you stick to the recommended brushing time and invest enough attention to each area of the mouth. If you don't have a phone stand like the one in the trailer, your arm may also get a little tired holding the phone up to your face, but it's definitely not a deal-breaker.

While I can't say that Pokémon Smile will keep me enthused forever, I'm enjoying it a lot for right now. It's truly making me excited about brushing my teeth, and that's not something I take lightly.

Love all things Pokémon? Click HERE to find out which first-generation Pokémon you are, based on your zodiac sign.