We Got to Play With Pomsies, the Adorable Virtual Cat You Wear Around Your Wrist

There's something about adorable virtual pets that we absolutely can't resist. From robotic dogs to fluffy alien critters and digital egg pets, we love them all.

So when we were given the chance to check out the upcoming Pomsies from Skyrocket Toys, we jumped at the chance. The critters don't hit store shelves until July, but we were able to befriend them a few weeks early.

Pomsies is a fluffy, cat-like virtual pet. It resembles a big kitten head with a wired prehensile tail you can wrap around your wrist or even your backpack or purse to wear with you wherever you go. 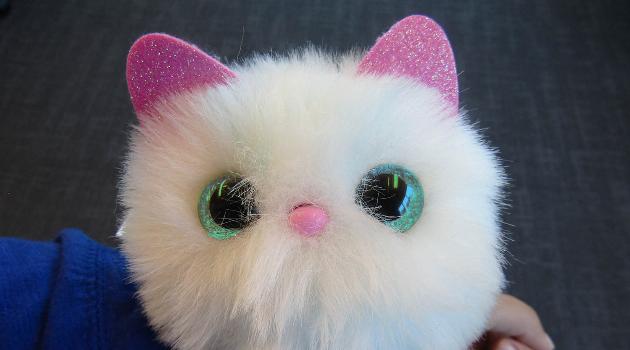 Pomsies has two main modes. There's a "Pet Mode" for when you want your Pomsies to act like a purring, mewing kitten, and a more interactive "Dance Mode." Its giant eyes also light up and change colors to reveal its current mood.

The toy itself is absolutely enchanting, but we needed to play with it ourselves to see what the buzz is all about.

Straight out of the box, it's easy to see why Pomsies is so enchanting. It's got loads of fluffy fur, glittering pink ear, giant sparkling eyes and a pink button nose. It even comes with a tiny brush so you can keep your Pomsies' coat in pristine condition. 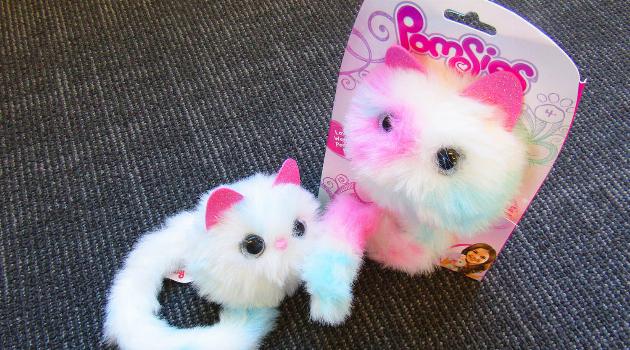 While we had a little trouble at first wrapping Pomsies' tail around our wrists, we eventually did get it secure. The smaller your wrist, the better it will hold—but just because you can't wrap it snugly doesn't mean you won't be able to enjoy it.

To turn it on, we just had to pull out a plastic tab and tap on the Pomsies' pink nose. Immediately, it sprang to life and its shining eyes started to glow in all the colors of the rainbow. The light show is especially striking in the dark. 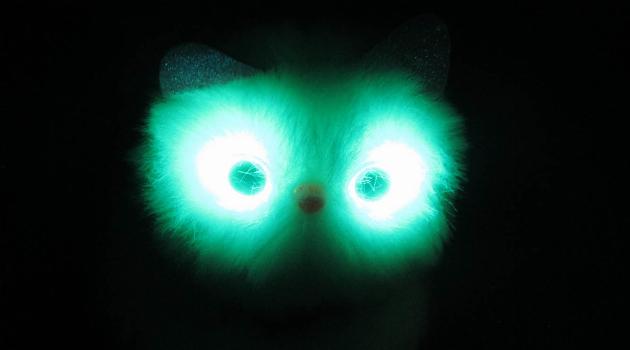 When the eye colors stopped shifting, they settled on a teal light signifying that the Pomsies was in pet mode. In this mode, it reacts to rocking, petting and light touches with cat noises. It meows and rumbles realistically as it purrs.

In pet mode, the eyes can also shift away from teal to reveal the Pomsies' mood. While Teal means it's happy, rainbow means super happy and pink signifies that your Pomsies is in a silly mood, other colors indicate that your Pomsies needs attention. Maybe the eyes will glow yellow, meaning you need to press on its mouth to feed it. When the eyes go green and it hiccups, you can shake it gently to make the hiccups go away. Lastly, blue means the Pomsies is sick, and each of its illnesses takes a different type of care to cure.

If you want to, you can also hold down the mouth and nose at the same time to make the Pomsies toot. It's super silly, but we've activated this feature too many times to count.

To activate dance mode, we just had to press and hold on Pomsies' nose for a second. In this mode, the Pomsies' eyes glowed purple and it started singing a series of meows to a pop music beat. This mode features a strange little game where, when a whistle blows, you shake the Pomsies to the beat of the music, and when it blows again, you freeze. The faster you shake the cat, the faster the music goes, essentially changing its song.

And when we needed to put Pomsies away—it's not exactly the kind of toy you want to be playing with all day in an office environment—we simply had to hold down its nose for three seconds to shut it down.

Pomsies is extremely cute, and we're expecting people who love adorable pets and interacting with virtual characters will enjoy it a lot. Altogether, we personally got way more mileage out of the pet mode. The features weren't anyone we haven't seen before in other virtual pets, but they're executed well and are more than enough to endear us to Pomsies. You can't help but want to cuddle them. 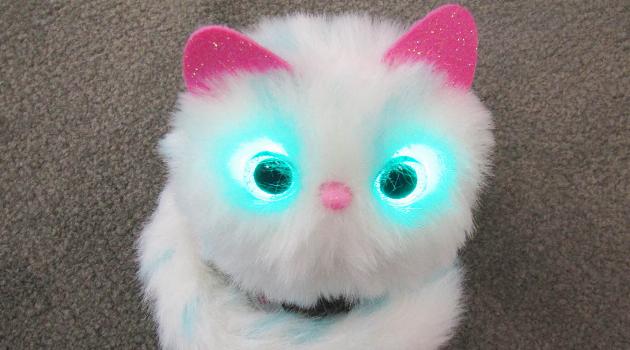 We also have to be honest and say we didn't stick with the dance mode that long. While it's charming for a little bit, it's not at all challenging, and not that engaging. While smaller kids may have some fun with it, we were way bigger fans of treating Pomsies as a pet.

Still, we love the idea of an accessory combined with an interactive pet. It's part pom-pom, part high-tech pal. We've had a lot of fun with ours, and if they're as popular as we're predicting, we're expecting them to branch beyond cat Pomsies into other animals in the future as well.

Pomsies will become available in July and will start retailing at $14.99.

If you love technological pets, click HERE to find out what we thought of Furby Connect.