When I think about making hot chocolate at home, I usually imagine pouring a grainy packet of chocolate-ish powder into a steaming mug of hot milk.

I've always been perfectly content with the cups of hot cocoa that result from that process. They'd taste sweet and chocolatey, even if there was always a pile of grainy debris at the bottom of the cup (no matter how hot the milk or how well it was stirred).

That all changed when Popbar reached out to me. Though the company typically specializes in gelato popsicles, they asked me to review their new Hot Chocolate on a Stick flavors. Curiosity drove me to say yes, and now I don't know if I'll ever be able to go back to the powdered stuff.

How exactly does one serve Hot Chocolate on a Stick? The premise is actually simpler than it sounds. Each one consists of a small brick of tasty, fast-melting chocolate on the end of a popsicle stick, and you can make yourself a cup of scrumptious hot chocolate simply by stirring it into a cup of hot milk.

The sticks come in milk, dark, white, peppermint, mocha and caramel chocolate flavors, and after just a couple of minutes, leave you with a mug of tasty cocoa made with real chocolate. I was sent the dark, peppermint and mocha flavors to try in my own taste test, and they didn't disappoint.

I decided to start with the simplest of the three flavors, dark chocolate. It looked like a chocolate lollipop, and the easy-to-follow instructions were printed on the back of its plastic wrapper. 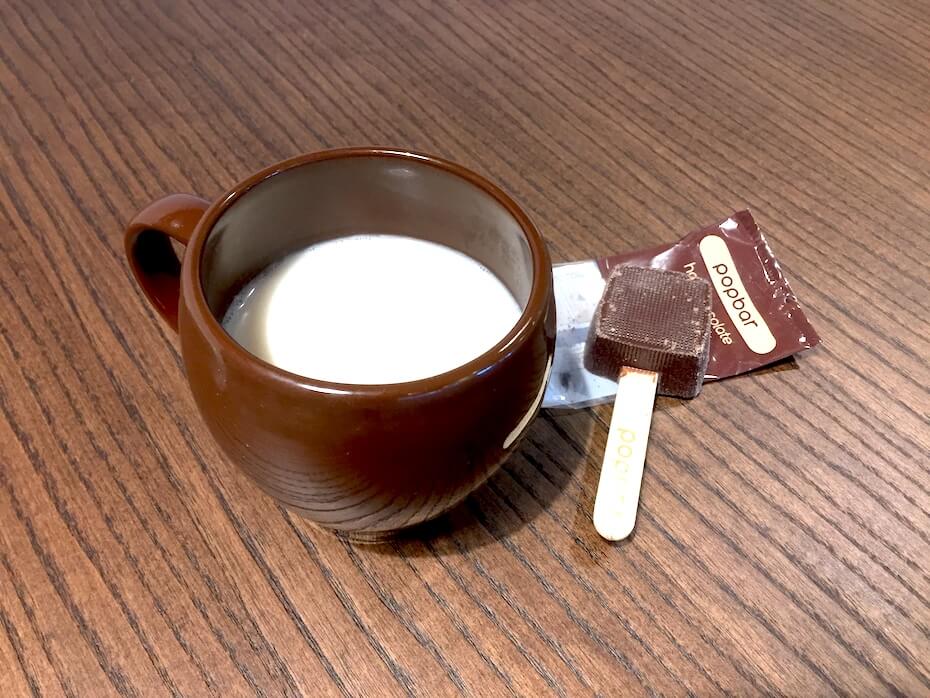 I used a measuring cup to pour eight ounces of almond milk (it's what I had on hand) into a mug before microwaving it for two minutes. When it came out, all I had to do was drop the chocolate end into the milk and stir away.

Immediately, I could see some of the chocolate melt away from the popsicle stick as it rose in brown bubbles to the surface and started to slowly change the white almond to a darker color. 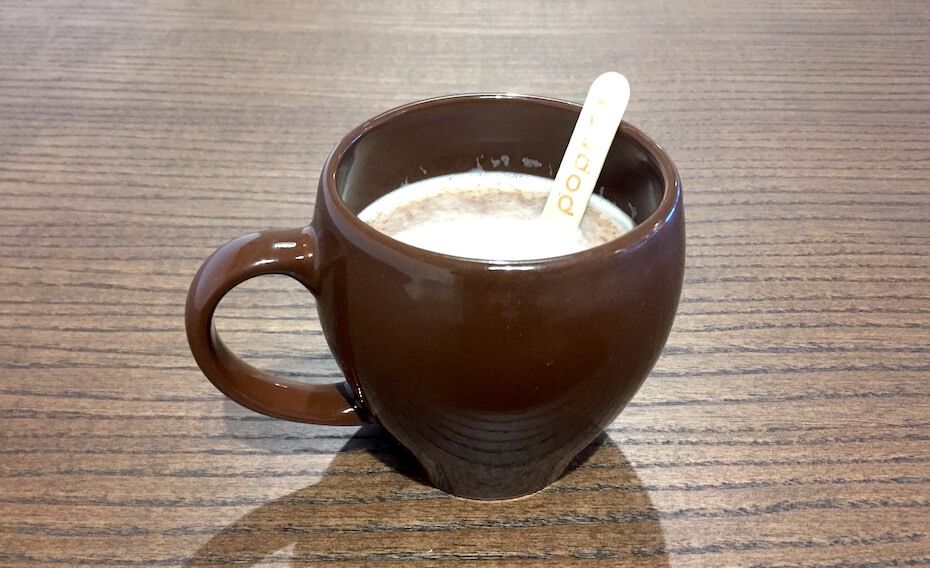 It wasn't long before I started getting impatient. As the almond milk turned a chocolatey shade of brown, I just had to see how much of the chocolate already melted. As I lifted it out, I saw that the chocolate left on the stick was still substantial. I hoped that might translate to a particularly chocolatey cup of cocoa. 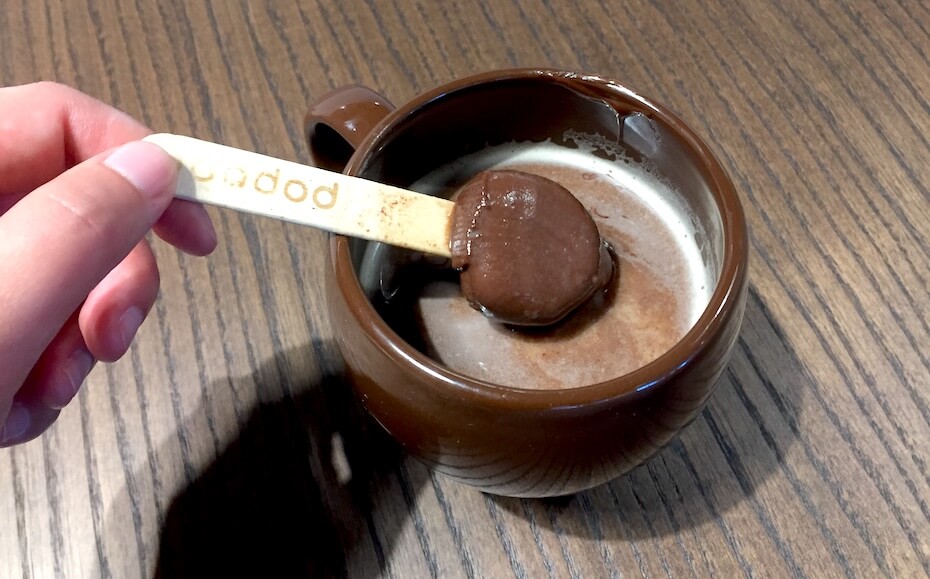 I stirred for another minute or so until the liquid in the mug resembled melty chocolate itself. When I pulled the popsicle stick out, there was just a bit of dark chocolate left clinging to it. Not wanting to waste it, I ate it up. The chocolate was dark and lightly sweet, and I knew I was in for a treat. 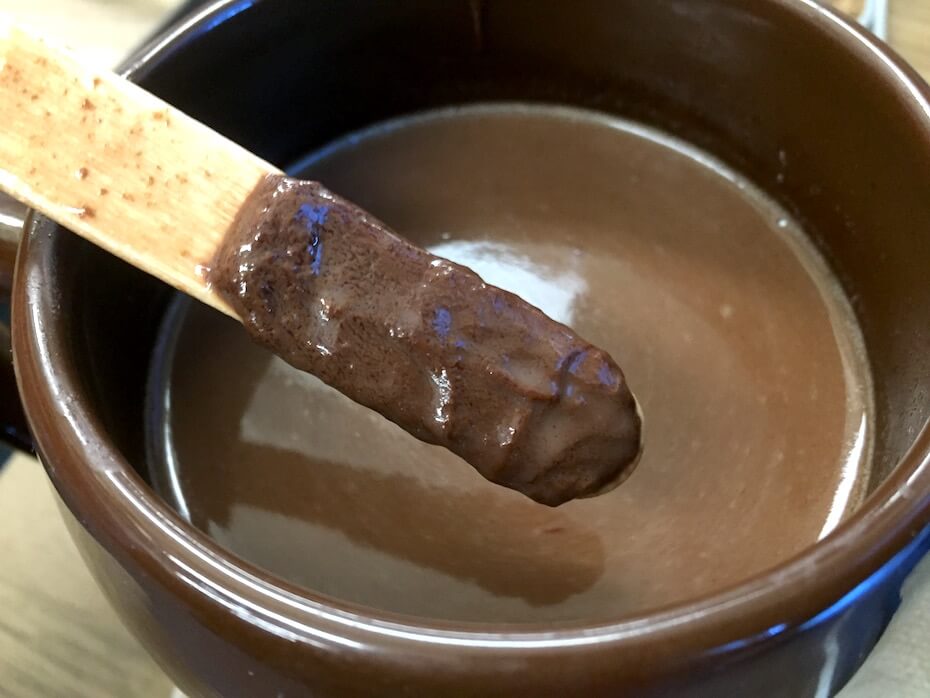 I wound up with a cup of hot chocolate that looked nothing like any other hot chocolate I'd had before. It was thick and rich, and even though it was packed with chocolate flavor, it wasn't too sweet. It was a far cry from the stuff I'd made at home by mixing powder into milk, and that was a really good thing. 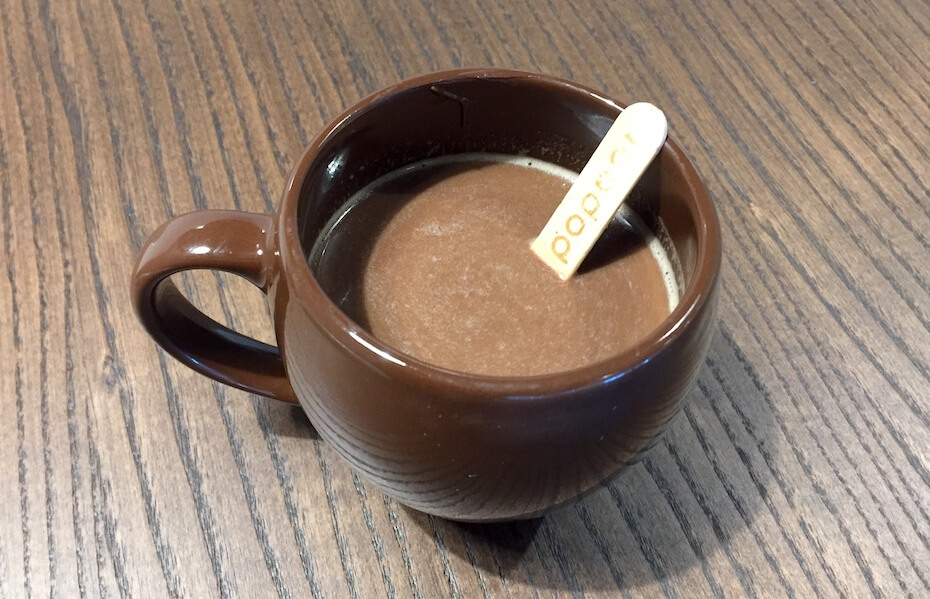 And things got even better at the bottom of the mug. Typically when I finish a hot chocolate, there's always that little bit at the bottom that doesn't get incorporated properly, and it's a chalky, tasteless mess. But this time, the floor of my cup was lined with actual melty chocolate. I thought the overall experience was a massive success. It was the best hot chocolate I'd ever had—and it probably would've been even better if I'd used regular milk.

The following day, I tried the mocha flavor. I can't typically have coffee because caffeine makes me ultra jittery, but I made an exception for the little bit of instant coffee in this one, and I was glad I did. In this case, a tiny sliver of the bar broke off, which I took as the perfect opportunity to find out what Hot Chocolate on a Stick tastes like in solid form. It was delicious, with just the right amount of bitterness from the coffee—even if I did occasionally bite into crunchy granules of the instant coffee inside. 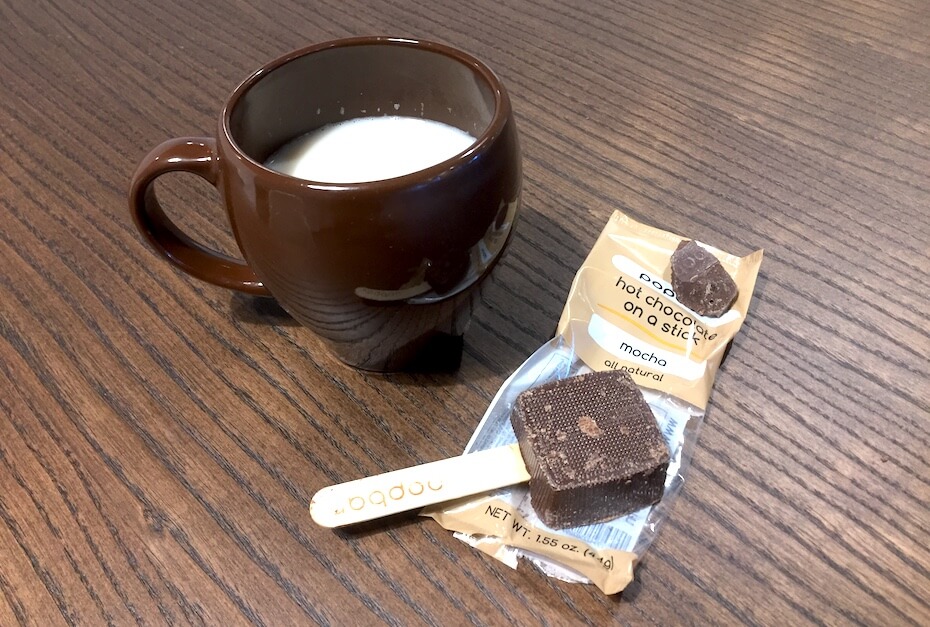 I followed the same steps as before, and wound up with a completely different, but equally tasty, cup of cocoa. It was as thick and creamy as the dark chocolate flavor, but had more complexity to the flavor, thanks to the addition of the coffee. It had a slight bitterness and a coffee aroma, but was still more chocolate than coffee. When I arrived at the bottom of the mug this time, there was a bit of graininess due to the instant coffee, but I liked that a lot better than typical dust hot chocolate remnants. I was a little hyper for the rest of the day, but it was completely worth it. 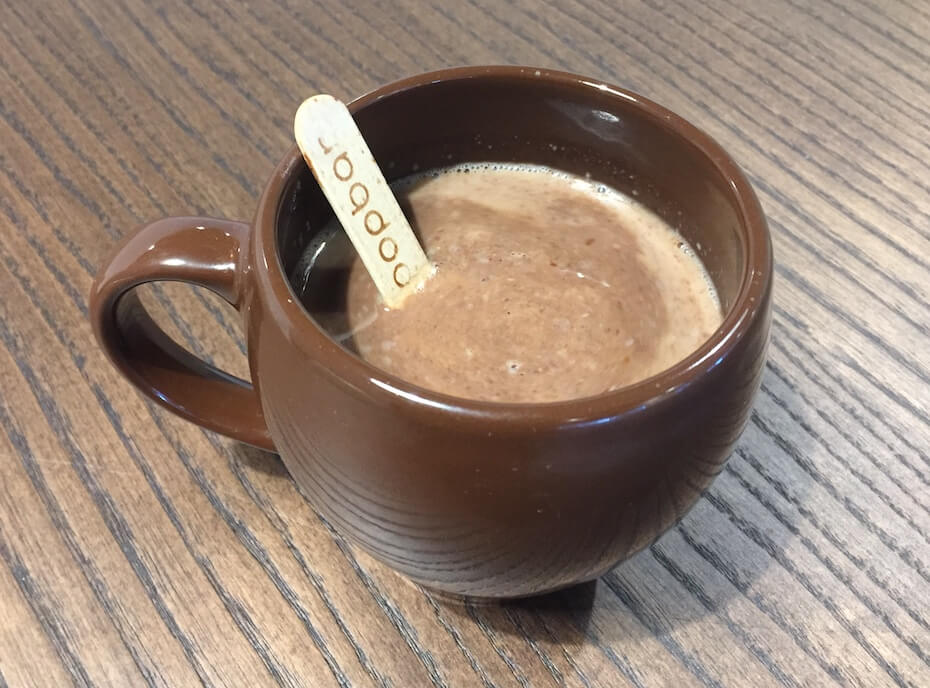 On the last day, I tried the flavor I was most excited about—peppermint. I love any combination of mint and chocolate, and with my previous two experiences being so positive, I was sure I'd love this flavor, too. When I opened the plastic wrapper, I immediately sensed the aroma of powerful peppermint and knew this would be the real deal. 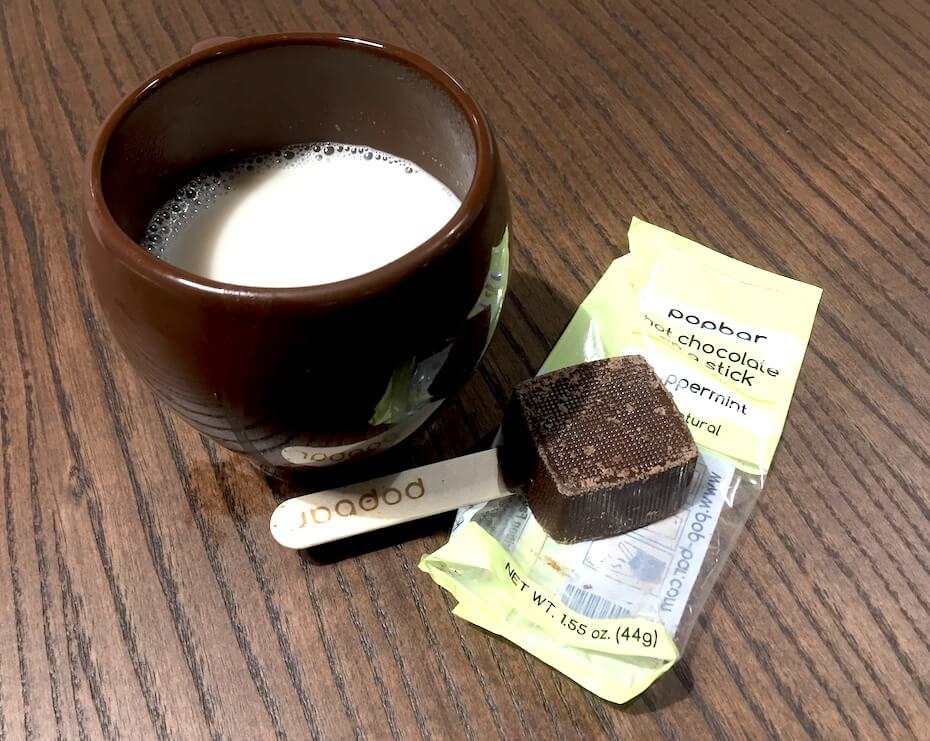 For the third and last time, I followed the simple steps, though this time I got a little over-excited and wound up spilling some of the almond milk over the side of the mug and getting some chocolate on the cup's rim—but that simply added to the experience. The peppermint scent was strong, and I couldn't wait to take a sip. When it was finally ready, I understood why. The mint oil was strong, adding heat to the hot chocolate as well as minty flavor, like a liquid peppermint patty. It was delicious, and it didn't take long to scarf it down, with some extra minty chocolate left for me at the bottom of the cup. 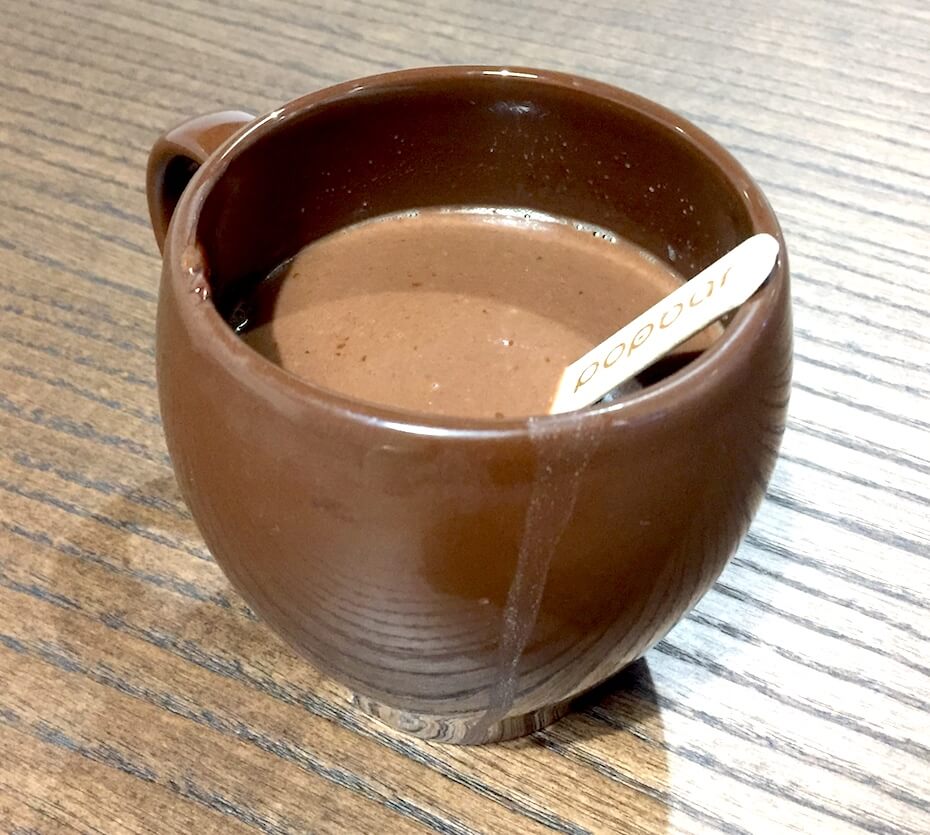 If you like chocolate, I can't imagine that you'd dislike Popbar's Hot Chocolate on a Stick. They make the best cups of hot chocolate I've ever had, and with six different flavors, they offer something for all kinds of chocolate lovers.

They cost $3 a piece on the Popbar website, which is a bit pricey if you're used to the packaged stuff, but a deal if you're used to going to coffee shops to get your chocolate fix. For a rich, gourmet hot chocolate in the comfort of your own home, it's not a bad price. Now that I've been spoiled by them, I don't know if I'll be satisfied with the old stuff—and maybe next time I try them, I'll even use regular milk.

Can't get your hand on one of Popbar's Hot Chocolate on a Sticks? Click HERE for 14 ways to add more kick to your hot chocolate.