Professor Layton vs. Phoenix Wright: Ace Attorney is a brand new game for Nintendo 3DS that combines two beloved series into medieval crossover for the ages! 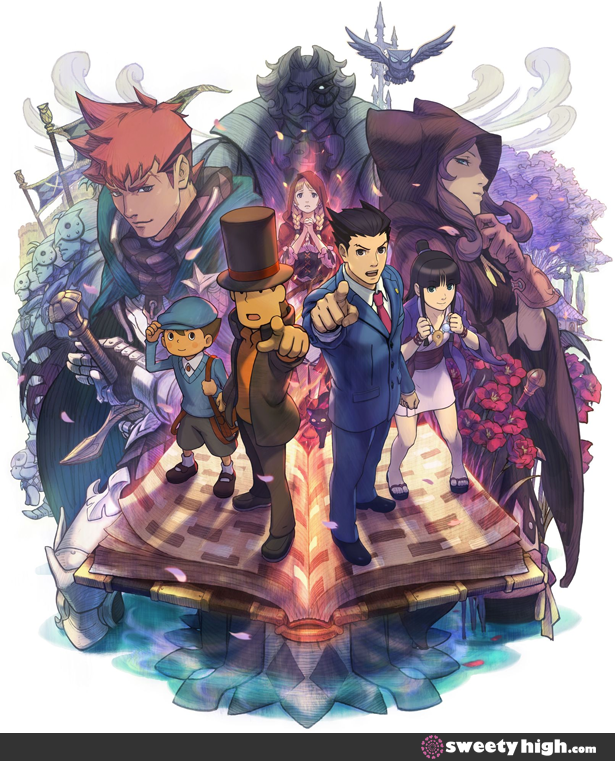 Professor Hershel Layton is a 20th century archeologist, solver of puzzling mysteries and discover of incredible ancient civilizations. Phoenix Wright is a modern-day defense attorney who never loses a case.

When a book with mysterious qualities suddenly appears in the lives of both men, they are somehow plucked out of their own timelines into a medieval city called Labrynthia.

There, Layton and Wright become involved in the trial of Espella Cantabella, a young girl who has been accused of witchcraft. It'll be up to the two unlikely partners to scout the city for clues to solve the mystery and prove Espella's innocence!

Professor Layton vs. Phoenix Wright: Ace Attorney utilizes the unique gameplay of both heroes'  series by combining the signature puzzles from the Professor Layton series with the incredible courtroom antics made famous by the Phoenix Wright games. Puzzles must be solved to gather evidence and build a case in Espella's defense while players cross-examine witnesses and potential suspects!

For the first time, Phoenix Wright will be able to utilize hint coins made famous in the Professor Layton series when he stumbles into a tricky courtroom dilemma. Wright will also be able to cross-examine groups of people at once for the very first time.

Layton's self-appointed apprentice, Luke Triton, and Wright's spirit medium assistant Maya Fey also get swept up in the mystery. But in addition to these well-known characters from past series, the new game will also feature memorable and idiosyncratic characters that are sure to be new fan favorites.

Once the main storyline is completed, the game isn't over just yet! Free downloadable content will extend gameplay with new mini episodes, complete with entirely new puzzle mysteries to solve.

Professor Layton vs. Phoenix Wright: Ace Attorney launched today, August 29! Stay tuned for a review of the game in the coming weeks!

Click here for even more game reviews and info, and be sure to join us at SweetyHigh.com to tell us what games you'd want us to review next and much more!