All the Reasons You'll Totally Regret Wearing Heels to Prom

Fancy gowns, staying out past curfew, dancing with your crush, photoshoots galore, sky-high heels… oh wait. You may want to scratch that last one.

While strutting your stuff in heels on what could be considered the biggest night of high school may sound fitting, you're actually much better off ditching them for a pair of kicks—as advised by YouTuber LaurDIY, who teamed up with Converse and Journeys for their Off to Prom event.

The internet sensation was on hand in New York City to help around 350 high school students decorate their own pairs of gifted Converse to prep for their big night in style. In fact, she was kind enough to design a pair for me (as seen in the photo below)! 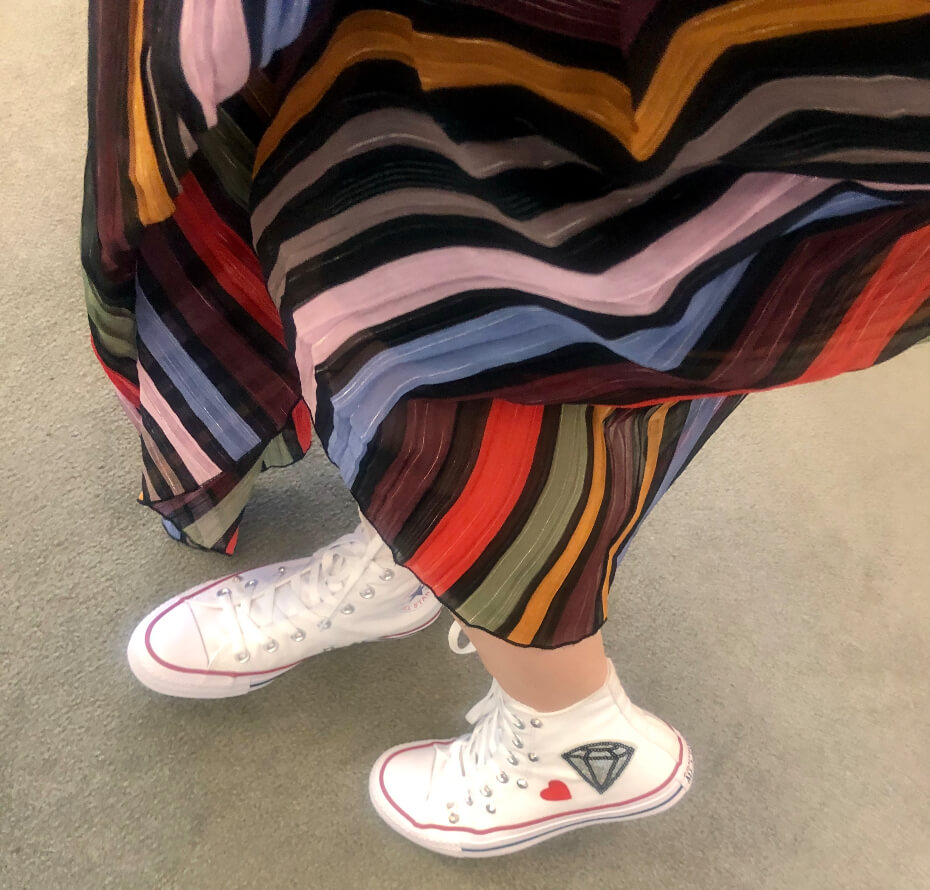 After receiving my shoes, I chatted with the DIY queen, who gave me the lowdown on why heels < sneakers on prom night, the DOs and DON'Ts of DIY-ing for prom and much more!

SweetyHigh: Were you hands-on with most of the students during the time? Or were they given crafts and you facilitated the whole thing?

LaurDIY: The brands were pretty open to what I was doing, so I was kind of free to just float around in the DIY room and take pictures with fans. I signed a ton of Converse and a ton of Converse boxes. I laced a lot of shoes. I somehow got put in an assembly line and was lacing shoes after someone on the team was pressing all the patches on. But I also helped pick out patches and grabbed initials and stuff for girls who wanted to do their initials or spell something on their shoes. It was really, really cute.

SH: For the girl who's set on wearing heels to prom, how do you convince them they should stick to sneakers?

LD: Oh my gosh, just speaking from experience, it was my biggest regret. When you're 17, 18, you have barely any experience walking in heels, at least I had none. And I wanted that experience. I was like, "I want to go biggest, tallest, sparkliest," and I wore them for maybe a total of, like, 15 minutes. They were just so painful, so uncomfortable, and then you end up feeling ratchet. You have hurt feet, because you don't want to be dancing in your heels.

The idea of doing that is great, but it's just so much more fun to do something cooler, like wearing Converse, decorating them, making them glitter, bedazzling them. Or I know like, so many schools now have themes for prom, and i feel like there's so much cool stuff you can do, especially with the DIY on Converse to match with your whole setup or your theme.

SH: And when it comes to DIY-ing stuff for prom, is there anything that you would say absolutely not to do? Like, for someone who doesn't have as much experience as you.

LD: [laughs] Like, honestly, I'm the type of person who would not—I didn't do my own makeup because that's not my forte. I didn't do my own hair because that's also not my forte. I don't know. I mean, if there's something you're good at, you should go for it. You know what I mean? It's like, I would never DIY my own corsage, but I feel like there are probably people who could, like, kill that. Or I've seen girls, like, sew a full prom dress.

So I don't want to be like, "No, there's something you should never DIY," because I feel like, I don't know, everyone's got their own strengths, right? Mine just aren't in hair and makeup. For me, personally, I was not doing that myself. 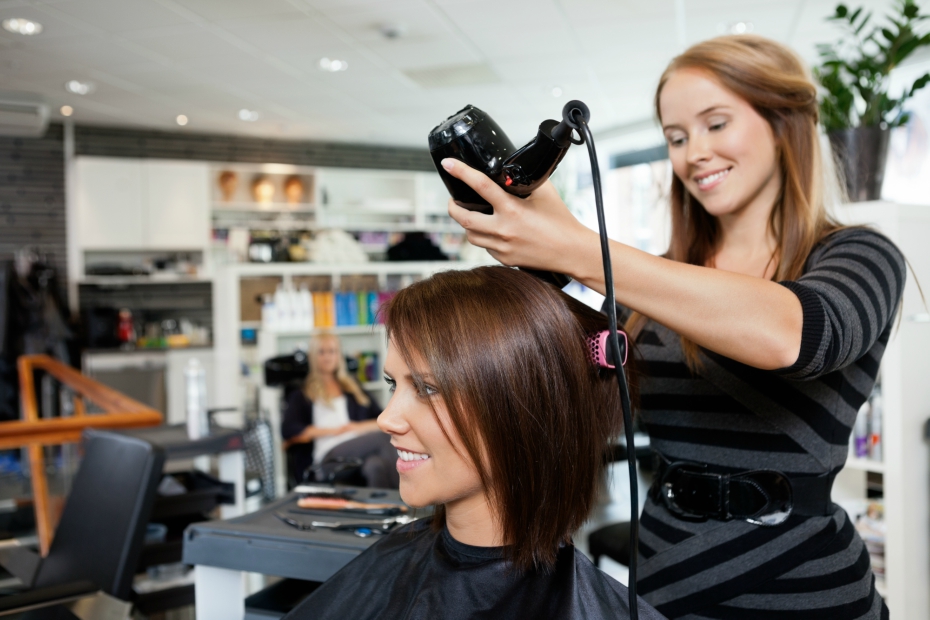 SH: What went into your thought process when you were helping these people design their shoes?

LD: It was like, "What can we do with the supplies and a limited amount of time?" So it was kind of like a speed-DIY, I guess, which is really fun. So, I don't know, they were like, "What color laces do you think would look good with this setup? Or what type of patch do you like better?" So it was easy stuff like that, because we were really DIY-ing on the fly here in such a time crunch.

SH: What are some of your prom tips?

LD: I mean, just have fun. People, I feel like, put so much pressure on the night, it's like New Year's Eve, you know what I mean? There's so much hype and so much pressure to like have this crazy, amazing time. But I think, as long as you're having fun, that's all that matters. Don't take it too, too seriously, just have fun. You know, people go into it with such intense expectations. Just focus on being comfortable, having fun, going with your friends and you'll have a good time. 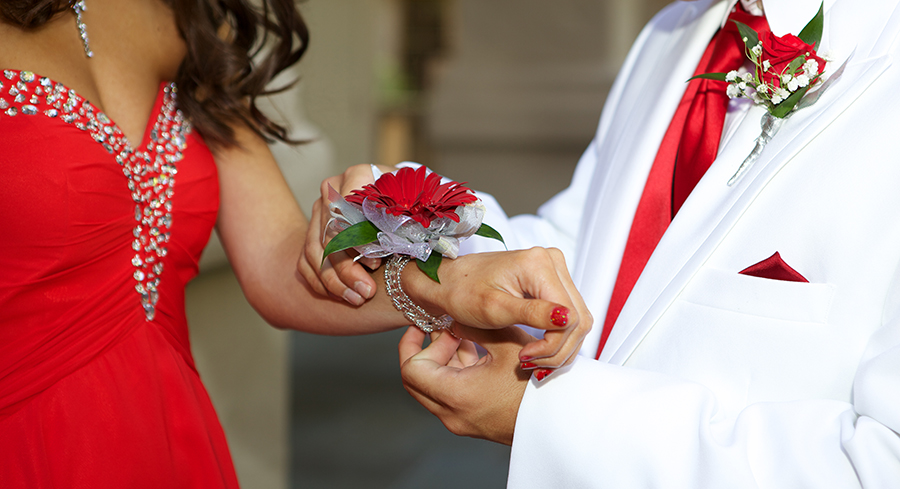 SH: What about any general DIY-ing tips for people just starting out?

LD: I think the biggest thing is, you know, you don't have to start with anything crazy. It can just be something small. It's just having fun. People see these crazy Pinterest crafts now and think that it has to be so intense. But, I mean, it can be simple as taking a Mason jar and sticking flowers in it. That still counts as DIY. So I think it's just having fun with it, starting small if you're a little nervous to get into it, finding inspo and just doing your thing.

Are you pumped for the big night? Listen to THIS pre-prom playlist to get you even more excited!