Puzzle Puppers Is a Puzzle Game About Feeding Super-Stretchy Dogs, and We're in Love

Puzzle Puppers is a puzzle-solving game about leading stretchy pups through ham-dotted fields to their food bowls.

The premise may sound simple—and it is—but the puzzles themselves are fun and challenging, and the noodle-like dogs you control are way more charming than they have any right to be. 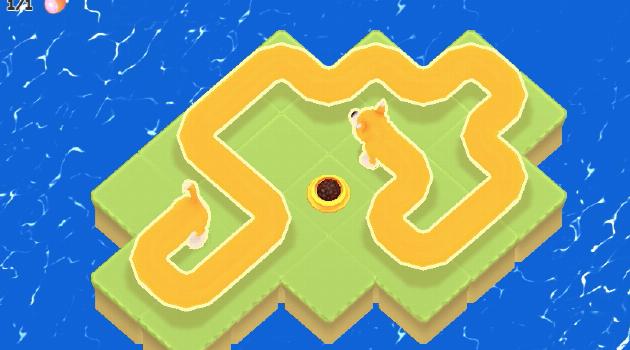 The title has been around as a computer and mobile game since last year, but it dropped on the Nintendo Switch just this week. Indie game developer Cardboard Keep gave us a review code for the Switch version, allowing us to test your doggy stretching skills to the max.

Each level in Puzzle Puppers has essentially the same format. There's a grid, and on that grid is a dog, a food dish in the dog's corresponding color and at least one juicy ham for the dog to gobble up on its way to a bowl. Sometimes, there are multiple dogs with multiple bowls. The level finishes once the player manages to lead each happy dog to its food (resulting in a very cute tail wag).

Leading a dog to food may not sound too tricky, but the game gets tougher and more mind-bending as it progresses. You'll have to make sure the dogs all have space to snake toward their goals, and as levels go on they introduce more dogs in craftier placements, plus holes that burrow under the level to other areas and rivers that always sweep your dogs downstream. 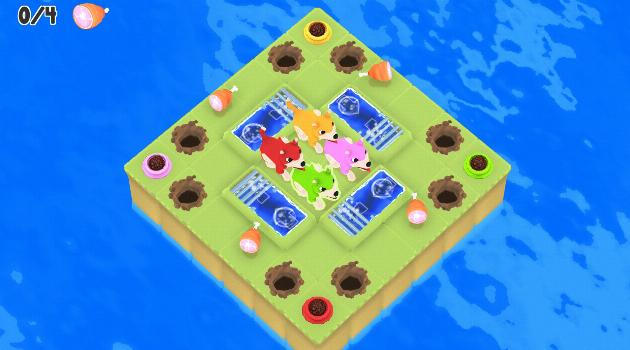 In a lot of levels, you can quickly drive your dogs straight to the food, but that's only playing the game halfway.  That's because the real goal of the game is to collect every ham onscreen before you grab your food. Only by doing so can you collect three hearts for each level and unlock the especially fun but tricky bonus stages that really test your mettle.  If you're a completist, you'll enjoy rerouting the dogs again and again until you finally grab every last ham.

And the game isn't designed to be easy. You can only tell where a hole will take you once you've explored it, and the only thing that will stop you from getting to the end of a river's current is a dog in your path. Sometimes, extra food bowls will try to lead you astray on your path to get all the hams, and, other times, the only thing blocking your way to success is your own doggy's behind. One level features six different doggos to lead home to their food. 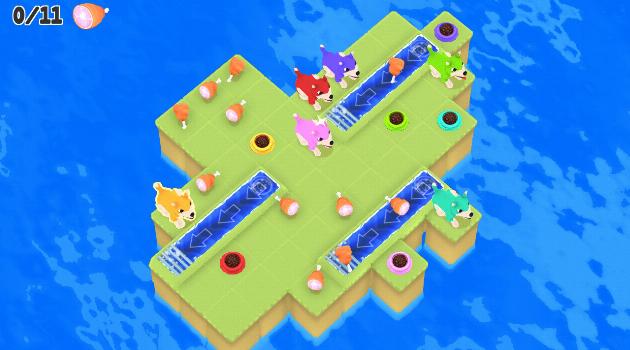 There are 80 levels in total, and though many will fly by, there are at least a couple that should stump you for a few minutes. Take the game's final level: There are 26 holes to potentially dig through, plus 14 hams and just one dog bowl. 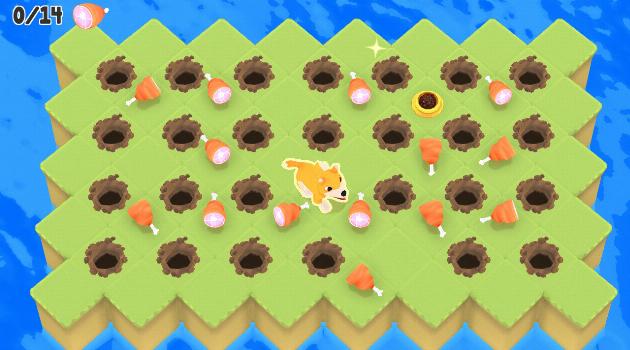 You could try out every solution by trial and error, but it would take ages to get to the real solution. On a few occasions we were so close, and yet so far. 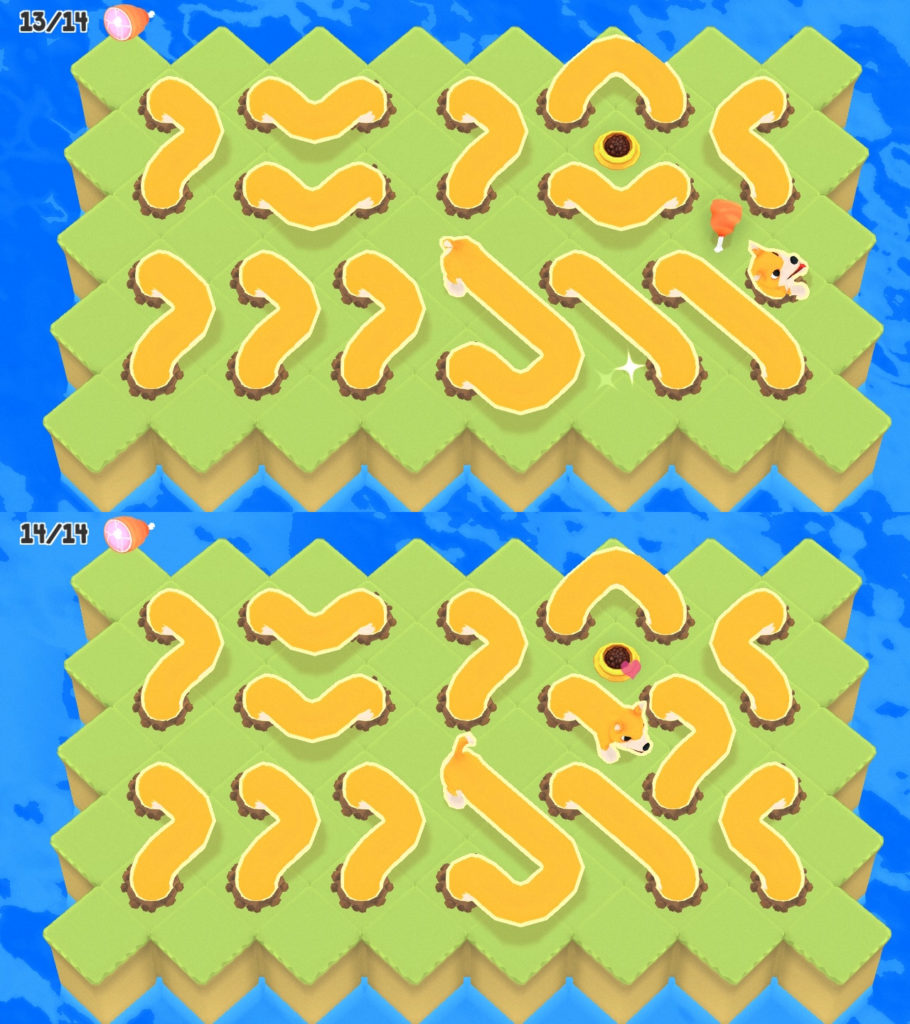 Eventually, we created a color-coded guide to which holes led where in order to not block off any hams and plot our course to victory. Though the solution didn't immediately make itself clear, it did in the end. 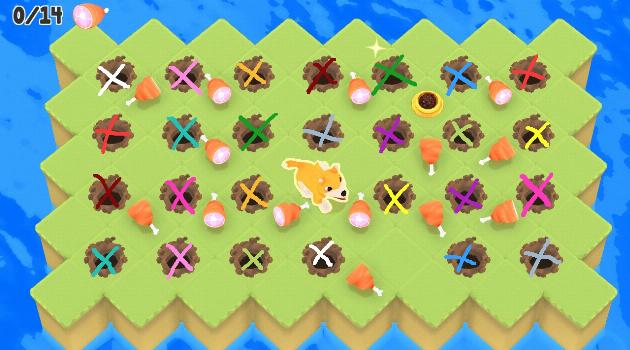 Our favorite little Puzzle Puppers detail is that, once you've completed the game, it gives you a congratulatory secret code phrase to tweet at the developers. Their response is sweet and makes so much sense given the content of the game. 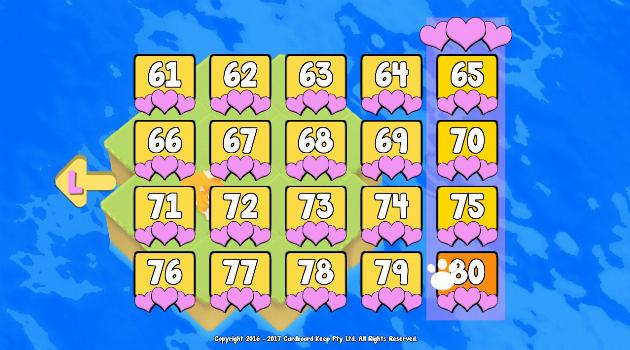 On top of the great puzzles, we also loved the sound design in Puzzle Puppers. Everything just sounds so darn cute. Any time a pup moves one square on the grid, it makes a pleasant popping sound, and you hear loud splashes anytime the dogs walk over water. The best sounds, however, are the adorable chomps made whenever a dog chows down on a tasty ham, plus the munching noises they make when they finally arrive at their food bowls. They also yap occasionally. Basically, if you like dog videos on the internet, you're going to fall in love with these weird Shiba Inu-Slinky Dog hybrids.

The classical, ballet-esque background music is lovely as well. It sounds elegant and soothing, even as you struggle to work out the tricky solution of each puzzle. It's fairly unobtrusive, and even though the track isn't very long and it's the only music in the game, we never found it annoying.

We've now played Puzzle Puppers on iOS, Steam and the Nintendo Switch, and each version has its own perks.

The iOS and Android app version is free, for one, and it's on your phone, so you can take it with you anywhere. While some players may prefer this version, in which you can drag your finger across the screen to guide the dog, we found it to be a little imprecise.

In the Steam version, players have more control, but they have to click in order to move about the screen, which takes a little longer than just tapping on the space. However, the Steam version has the added benefit of achievements, which are fun little badges you get for beating the bonus levels. It further incentivizes outsmarting each puzzle and making it all the way through.

But the Nintendo Switch version is probably our favorite due to its slick controls. While you can use the analog stick to select your dog's direction and push the A button to move, you can also use the control pad to quickly dart around the field and use the L and R buttons to toggle between dogs. Touch controls are available, too, if you're playing in handheld mode, giving the player three different control schemes, depending on their preferences. 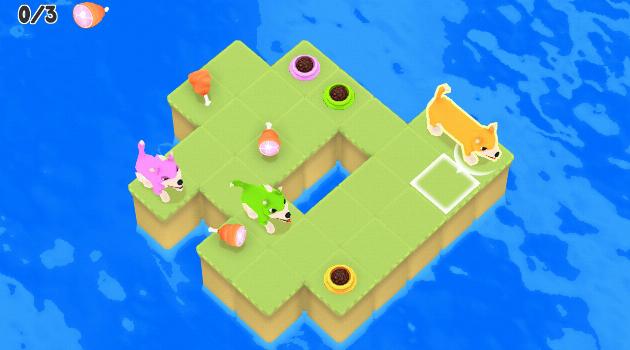 If you're eager to play Puzzle Puppers but don't have much cash, you can download it for free on iOs and Android devices in their respective stores. The Steam version for Macs and PCs, as well as the Nintendo Switch version, retail for $4.99.

If you can't get enough of puzzle games on the Switch, click HERE to read our review of the delightfully weird puzzler Mom Hid My Game.