These Gorgeous PyroPet Animal Candles Have Hidden Skeletons Inside

I've been fascinated by PyroPet candles ever since I first saw one online a couple of years ago, but I never got around to burning one myself—until I was asked to review them, that is.

When the opportunity arose last month to experience their magic for myself, I jumped at it. I took a look at their selection, picked a couple of my favorite designs and waited patiently for them to arrive so I could admire them in person.

Even on the surface, PyroPets candles aren't like anything else we've seen. They're colorful paraffin candles that come in eight incredible geometric animal shapes: dragon, reindeer, owl, rabbit, chick, dog, cat and unicorn.

But the real appeal requires you to dig a little deeper. Once the wax starts to burn away, their haunting yet beautiful skeletons are slowly revealed over the hours—and when you're through with the candle, you're left with a skeletal aluminum keepsake. 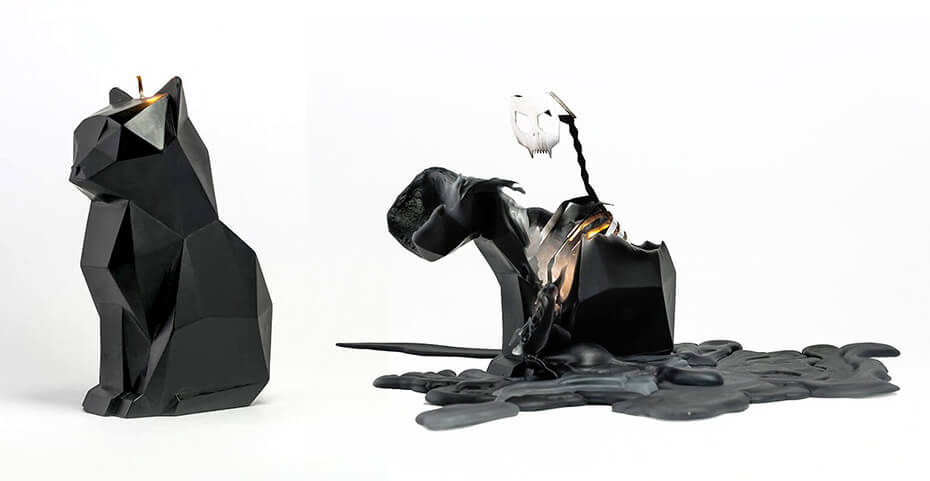 When the striking black and white PyroPets boxed arrived, I was surprised at how big they were. For some reason, I'd envisioned the candles as two or three inches tall, and these boxes indicated that they'd be much larger. The evocative art on the boxes was impossible to ignore, immediately making me want to open them up and light one up. I received Einar the unicorn and Kisa the cat, and decided to try out Einar first. 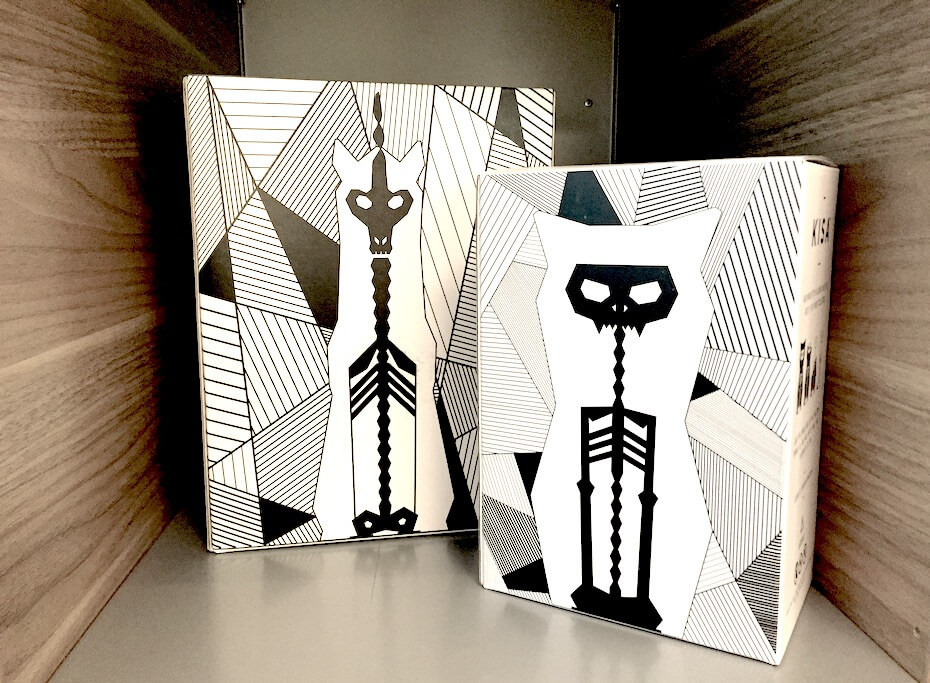 The lilac Einar candle was so regal it was almost a shame to melt it. The candle stood at more than five inches tall, with its gold skeleton poking up through the wax in the shape of a curled horn. 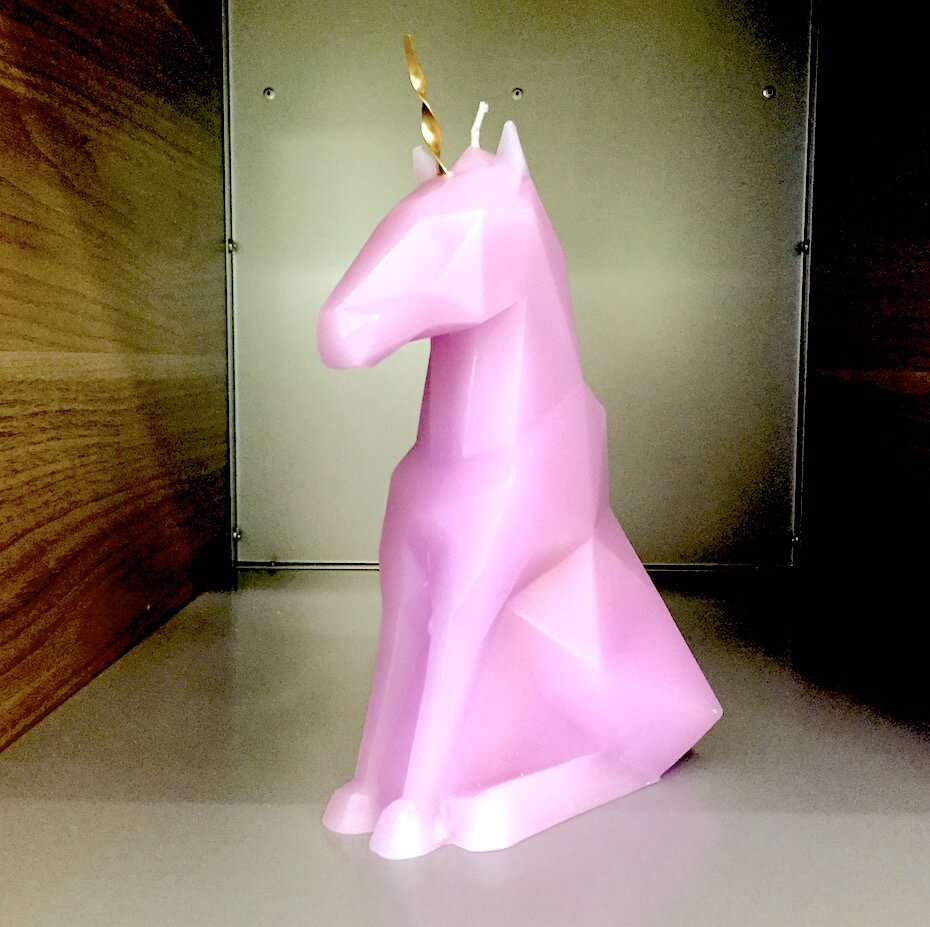 When I was done admiring the unicorn, I placed the candle on a white plate to catch any dripping wax, lit the wick and waited patiently for it to melt. The candle was totally unscented, which I definitely preferred over one with an overpowering aroma. 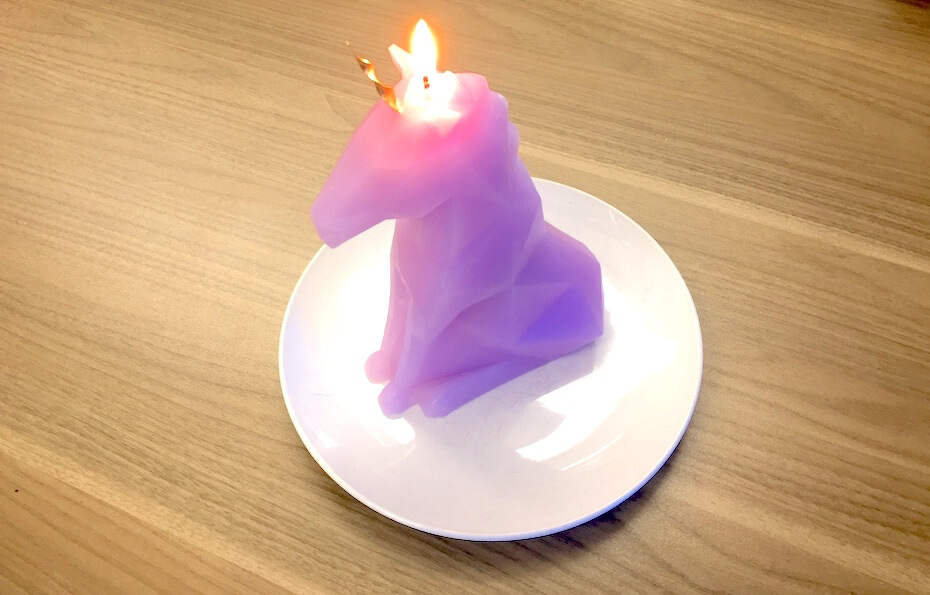 Within a few hours, I got exactly what I was looking for. The wax at the top of the unicorn's head had started to melt away, revealing the top of its skull. I could see part of its small gold skeleton peeking out at me, and it was a delight. 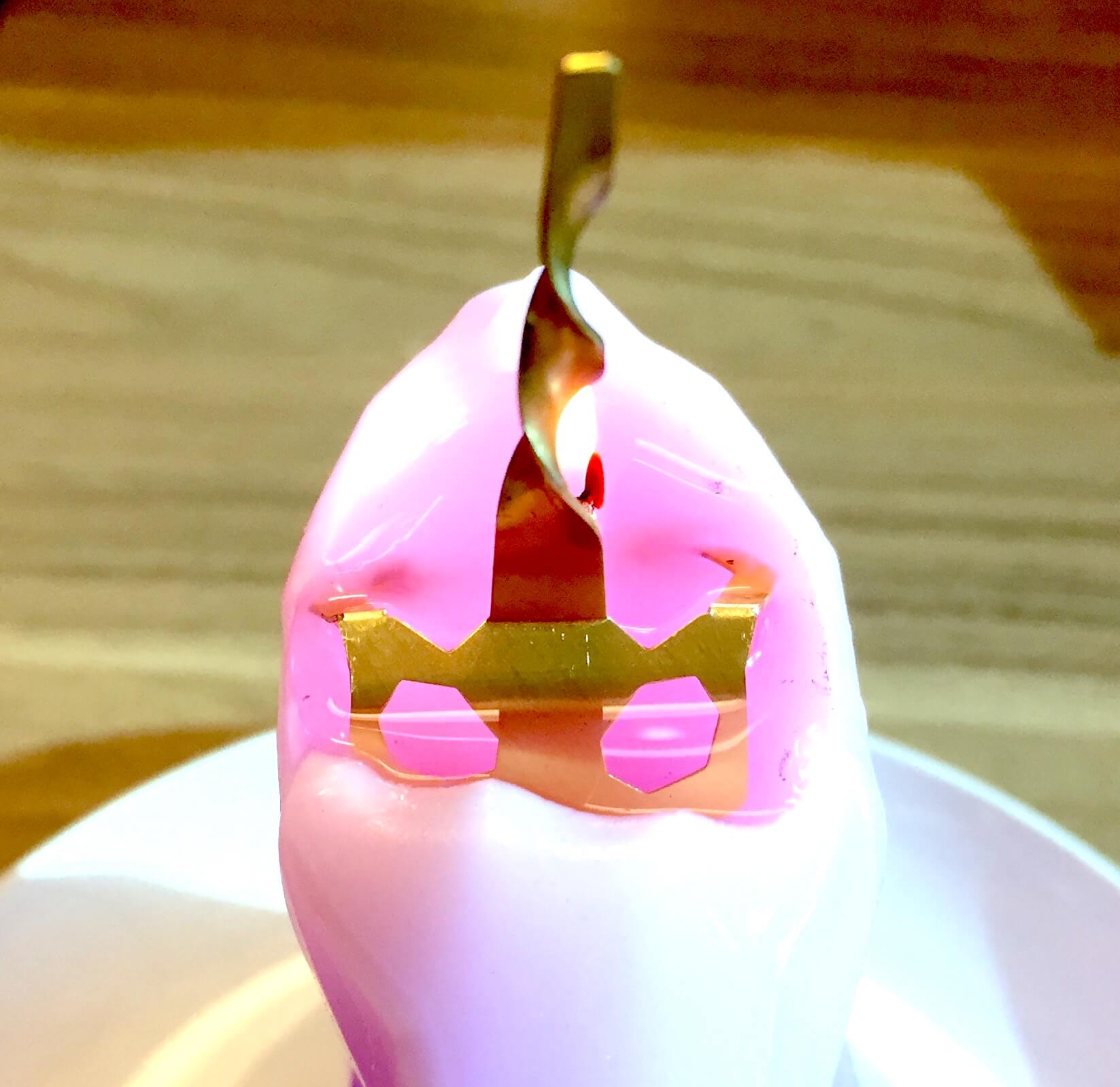 From there, the melting seemed to speed up significantly. In just a few hours, the flame tunneled down the neck of the unicorn and the face melted off completely, hanging on by a thread underneath the exposed skull of the unicorn. With the wax pooling around its feet, it looked just as cool as I'd imagined. 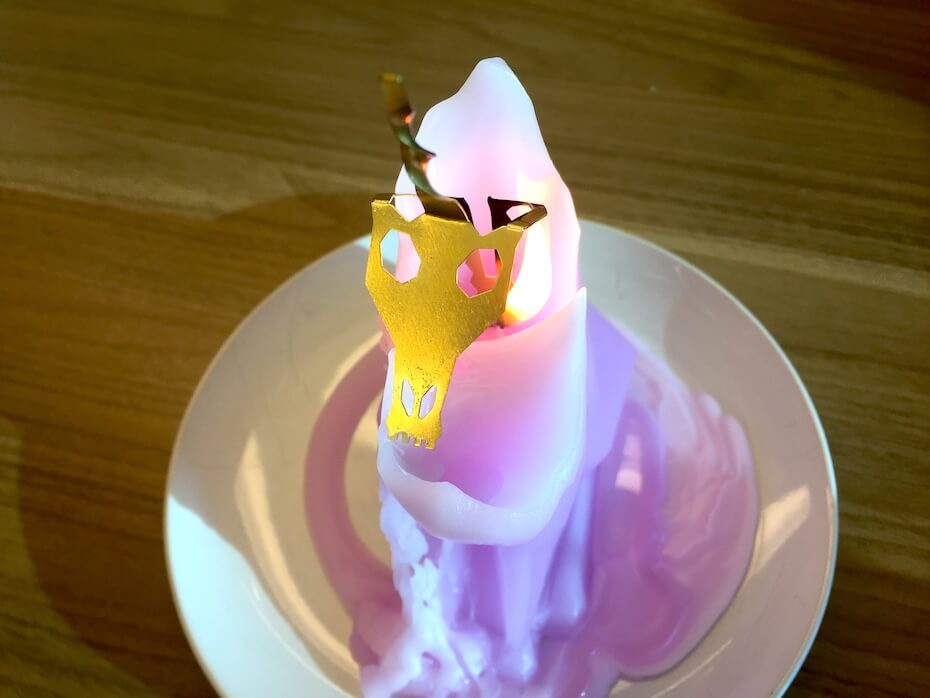 At this point, I had to extinguish the flame, but the following day I lit it back up. The fire continued to melt quickly down into the body of the unicorn, so I decided to give the candle a little help by breaking off any excess pieces of wax that were pliable due to the heat. The fire also started licking the metal skeleton, leaving it dark and charred and giving off a light burning smell. When most of the skeleton was exposed, it sat in the middle of a pretty pink pool, with the glow of the fire giving it a stunning visual effect. 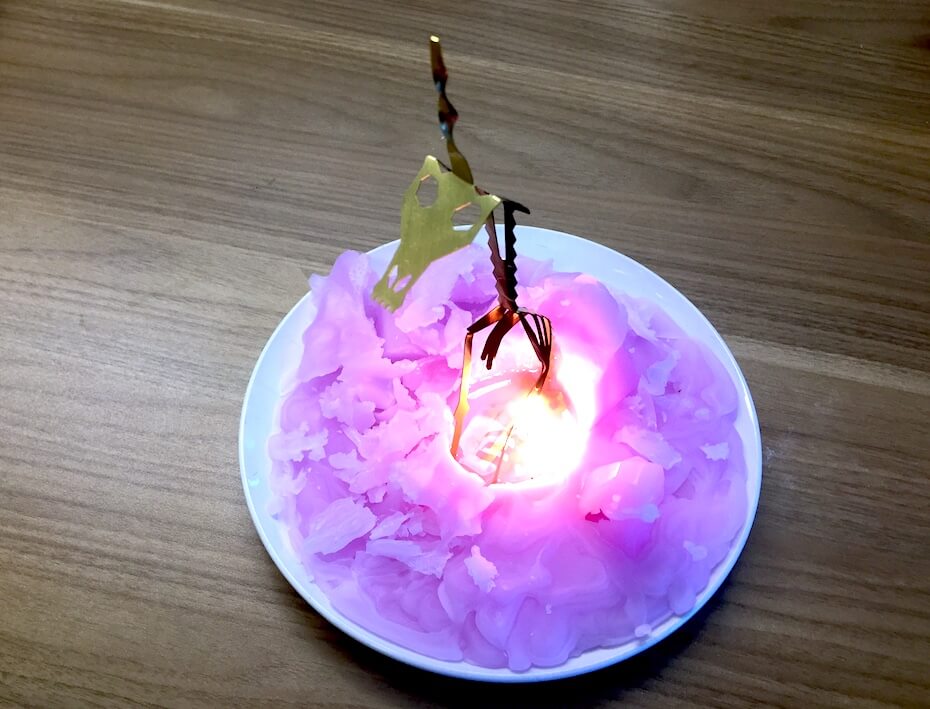 I was a little sad when the fire eventually went out because it meant my unicorn candle adventure was done, but I did love the pile of pink wax it left in its wake. It took about 14 hours for the entire candle to burn through. 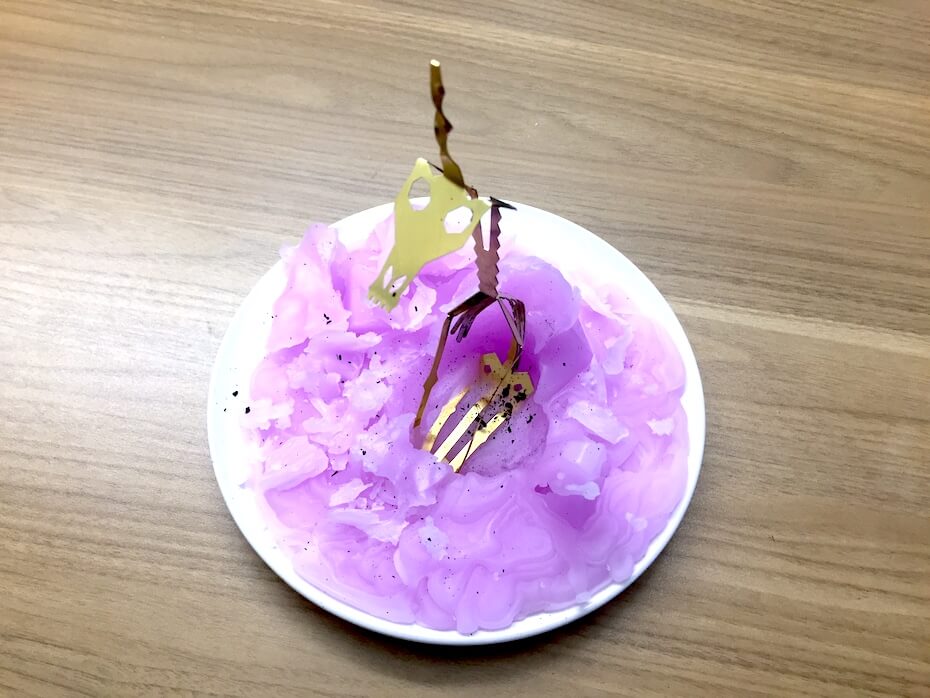 It took a little prying and heat, but I eventually removed the full skeleton successfully from the paraffin. After wiping off the black soot that accumulated, I put it on my desk. Now that's what I call a conversation starter. 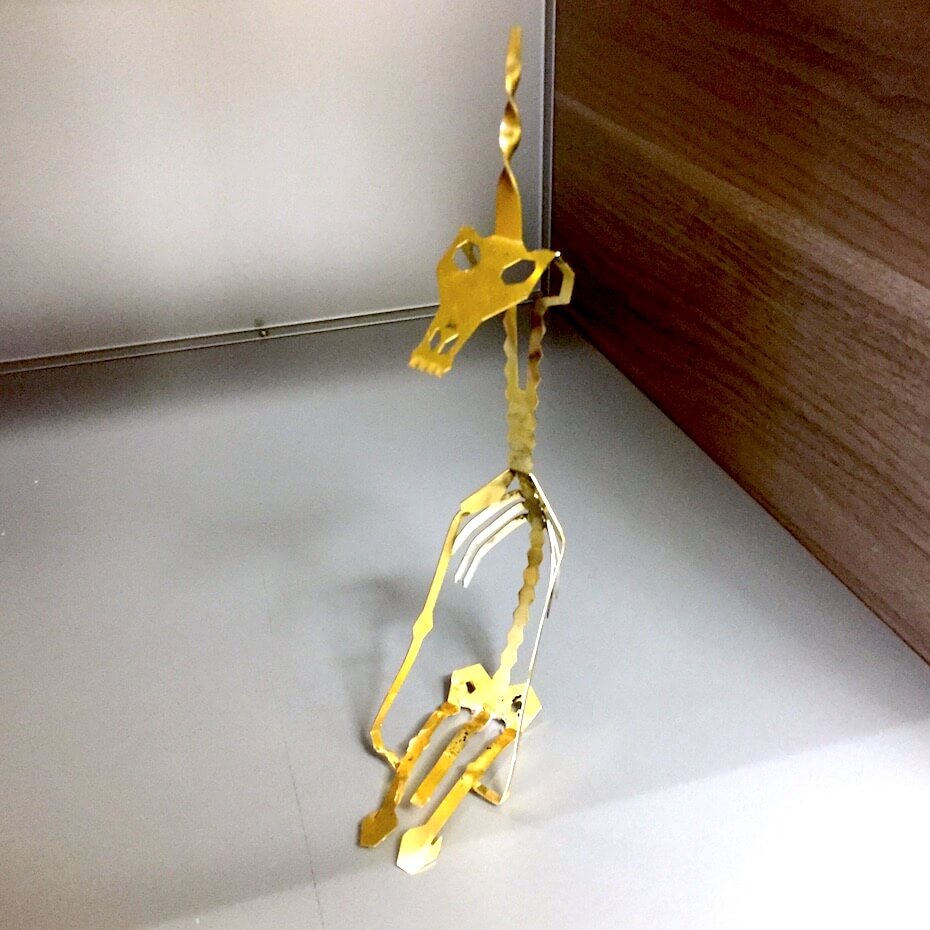 It wasn't long before I also had to get started burning the cute grey kitty, Kisa. Though it came in a significantly smaller box, this candle was both taller and bulkier than the unicorn candle, so I had to be more patient to see what was waiting inside for me. Like the other one, it had no scent. 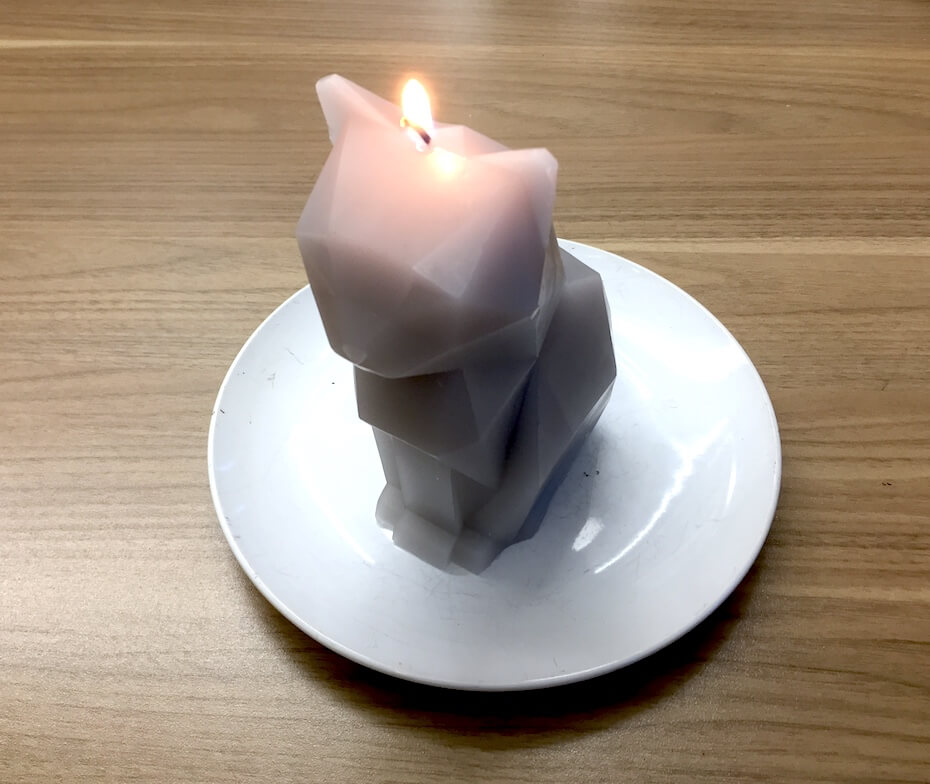 Once I lit the candle, this one took a lot longer to begin melting away. After almost a full workday, the fire had barely melted through the top of the head. The skeleton was still hidden, but I could just see it through a layer of melted wax. 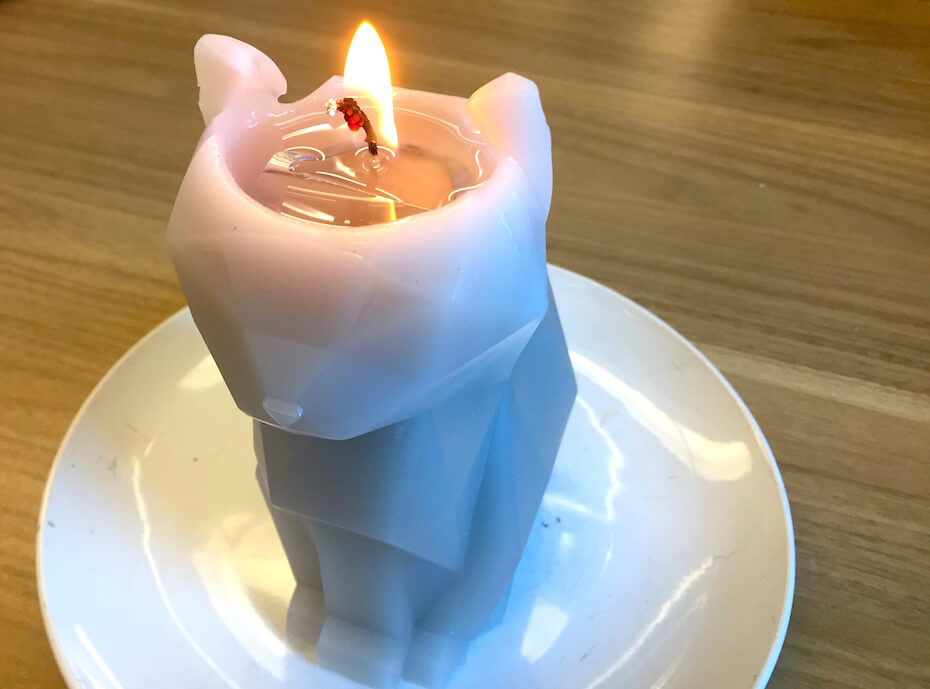 I had to put the candle out and light it again the next day. This time, it took a couple more hours until I could see the metallic top of the school. It looked particularly spooky with the candlelight shining through the eye holes, which I loved. 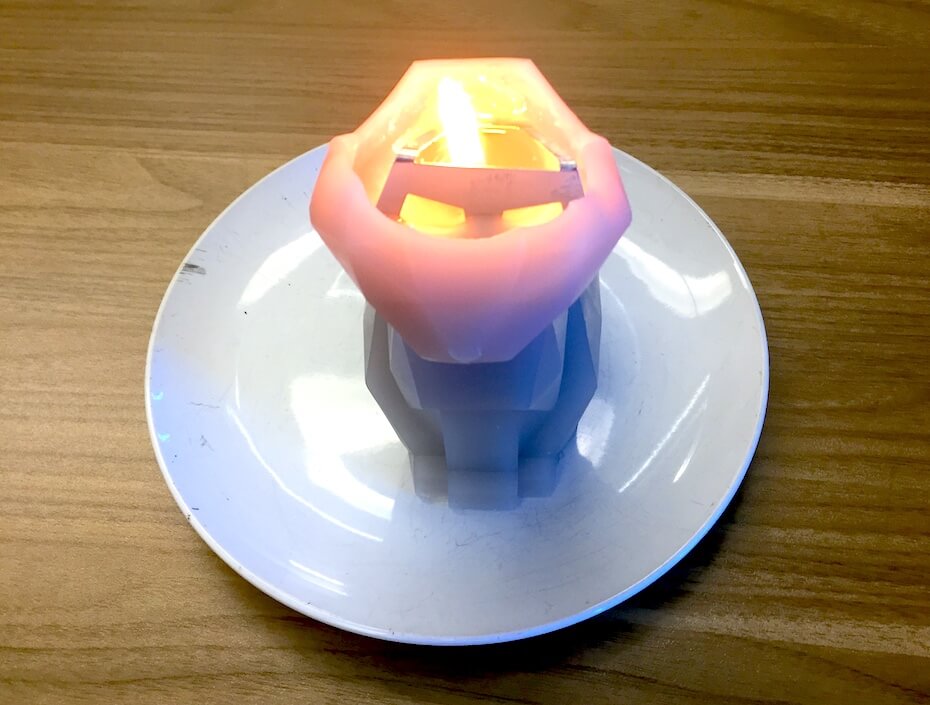 A few hours later, the wax on the cat's face started to droop, revealing the rest of the aluminum cat skull. With its big eyes and sharp teeth, it made quite an impression on anyone who walked by. 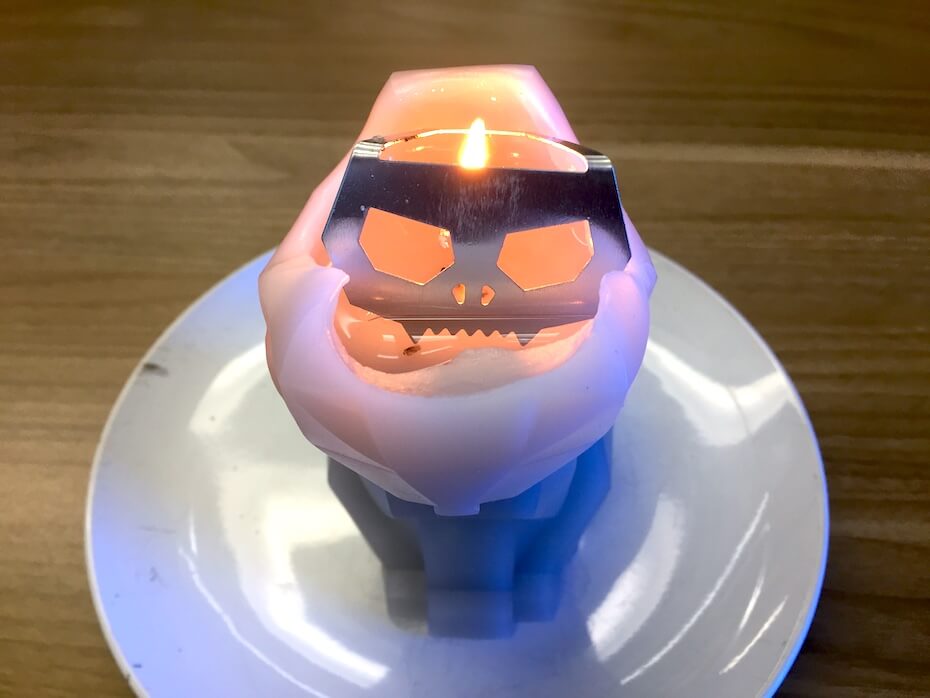 Up to now, the candle had somehow contained itself, and there was no dripping wax whatsoever. That changed over the next few hours as more of the head curled forward and the top of the ribs rose from the wax. At this point, the candle had already made it through two work days. How much longer would Kisa last? 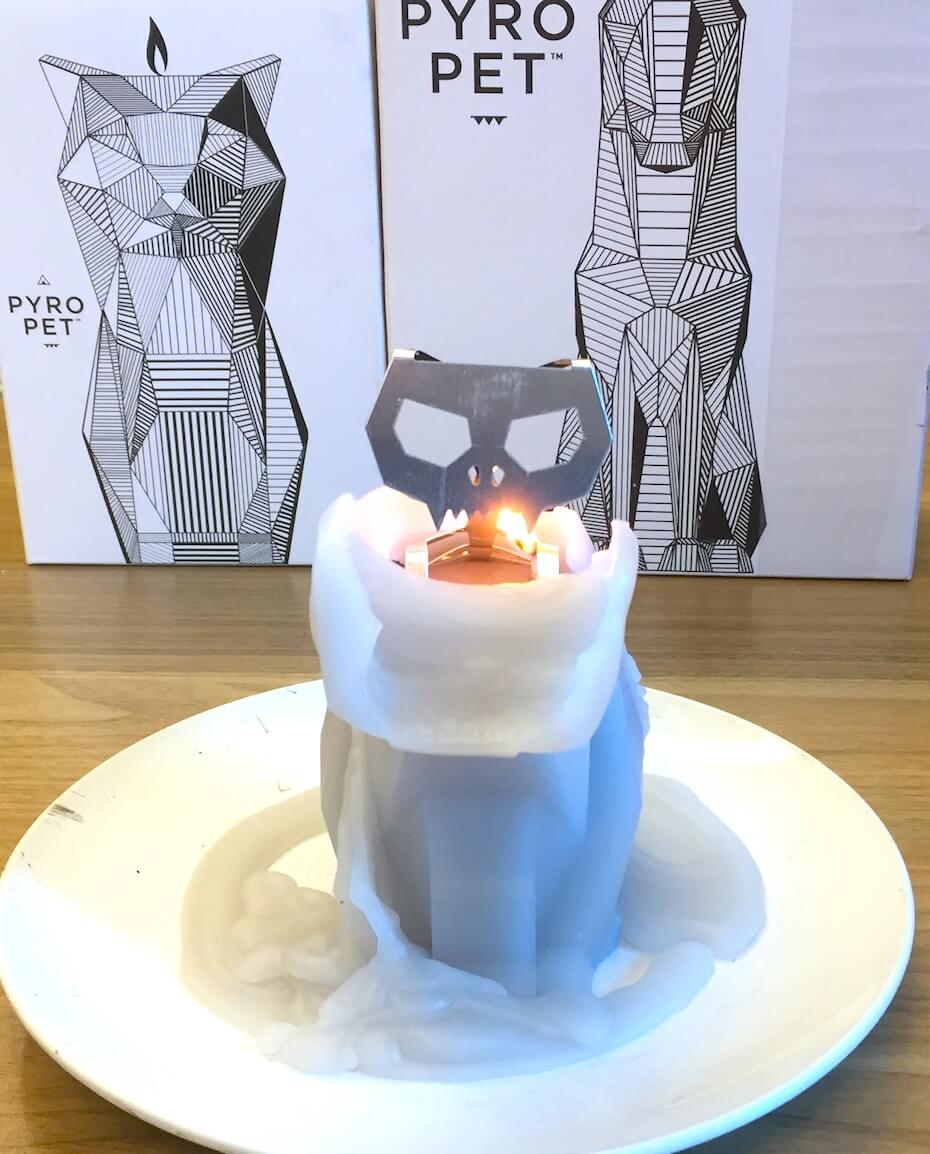 I found my answer the following day. After lighting it again, the burning process seemed to speed up exponentially. As with the Einar candle, the fire started heating the metal, coating it in black dust and giving off a metallic smell. Within a 90-minute span, the flame seemed to dig straight down through the wax while I was working. By the time I looked over at it again, the fire went out on its own and wax was dripping onto the table. Perhaps it would've lasted longer if I'd been more diligent, but at about 18 hours of burn time, I was still pleased with the result. It'll take me more work to pry the skeleton out of this candle, but I look forward to doing so. 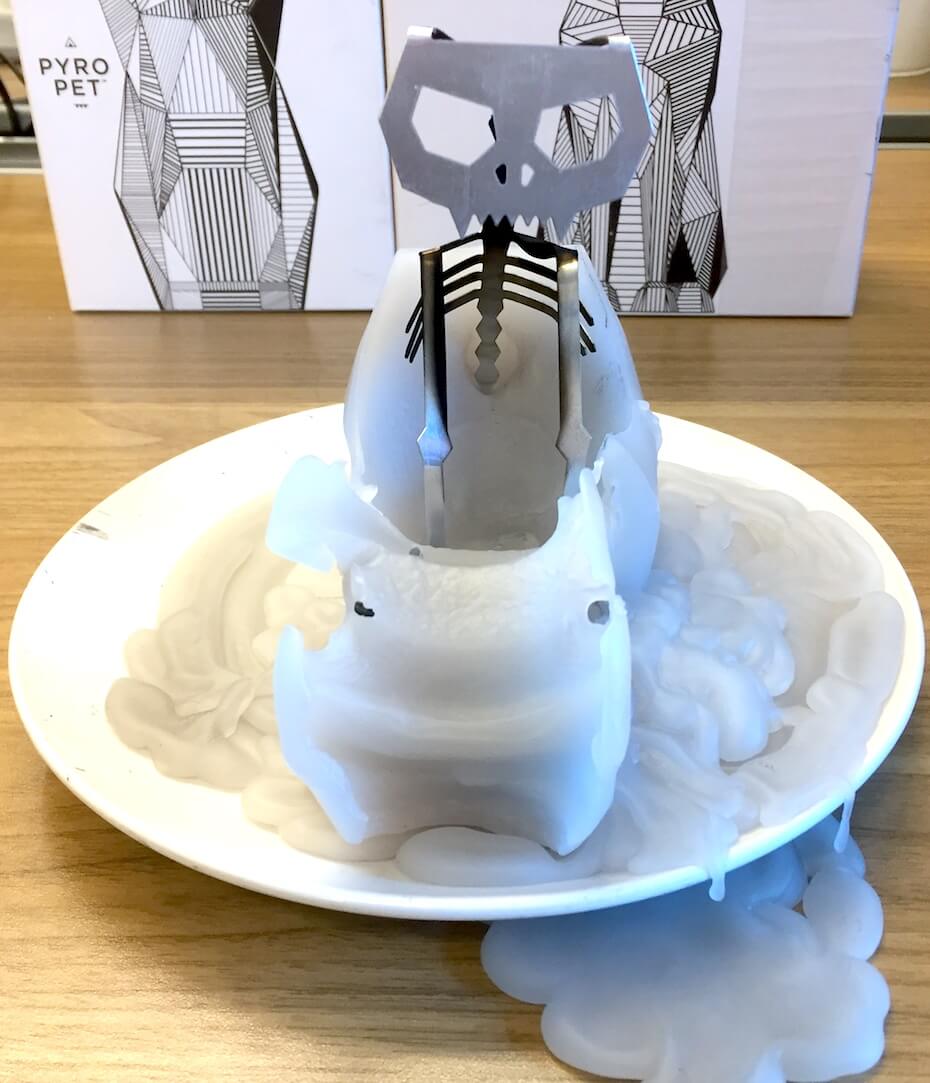 If you love the aesthetic of PyroPets, they're totally worth the investment. All of their candles cost between $19.99 and $35, but you get more bang for your buck if you opt for the larger, more spectacular candles. That's not too bad considering how expensive other fancy candles can get.

I enjoyed every step of slowly watching my PyroPet candles burn away to reveal awesome-looking metal skeletons, but even before they melted, they looked amazing on my desk. They'd be just the thing for a Halloween party, lit or unlit, and they'd also be a great gift for the animal-lover in your life.

Still, you should keep a careful eye on your PyroPets candles, not only because of the fire hazard, but also so you don't end up with wax all over everything. The fact that the candles last so long is an added bonus, and I fully intend to try them again in the near future.

If you love unusual candles, click HERE to find out about the candle that reveals your Hogwarts house.