Rachel Crow is a 16-year-old singer who found fame after she appeared on the first season of The X Factor. Most recently, she lent her vocal talents to the animated film Rio 2! 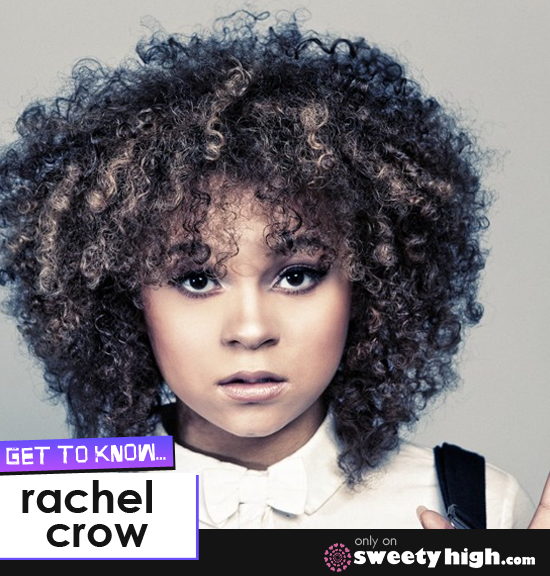 We spoke with Rachel Crow about all things Rio 2, including recording her vocals, meeting the film's stars and singing with Jamie Foxx!

She said that recording for her animated character wasn't exactly what she expected.

"It's very weird," Rachel said. "I'm used to being in a studio recording music and songs, but when you're by yourself in a booth, it's really different."

"Once I was in there it was so much fun," she said. "I just had a blast and I'm actually thankful no one else was there besides us because I think I was making some seriously crazy faces and I do not want those out there in public."

"They were so nice to me," she said. "Anne Hathaway is amazing. She gave me a hug and said if she had a daughter she hoped she would be like me. I was just like, you are the nicest person I've ever met! She's just so sweet and kind and so loving and she just gives out a happy energy which I think is really cool!"

Rachel's character, Carla, is a Spix's Macaw, and the eldest daughter of Blu and Jewel. She also has a younger brother, Tiago, and a younger sister, named Bia.

"Her little brother is an adrenaline junky," Rachel explained. "He just wants to get in trouble all the time and can't help himself. And Carla's sister Bia is much like my actual little sister in real life. She's very smart and has to have everything perfect all the time."

She said that the precocious Carla was somewhere in the middle.

"As Carla I'm easygoing, I'm very efficient, and I know what I want and I go for it," she said. "I also love music, and I always have my headphones in. I have fun personality, always laughing and joking, and messing with my uncles."

Rachel agreed with us that it was interesting that a bird could have her own iPod and headphones.

"I know!" she said. "Everybody's asking me where her ears are. I heard they were there. I don't know how the headphones stay in, but hey! It's movie magic."

Rachel Crow also got to show off some of her singing talents on a song for the Rio 2 soundtrack called "Batucada Familia" alongside Jamie Foxx!

"The experience was so surreal," she explained. "They called and asked if I'd like to come to a recording studio in Santa Monica. I agreed, so we drove up there and we pull in and it's this giant white beautiful house. It's huge, it's right by Malibu overlooking the beach and it's just beautiful."

The house belonged to John Powell, who wrote the scores for both Rio movies.

"I said, 'Your house is beautiful,' and he said, 'Oh no, this just my studio. My house is up the road,'" Rachel laughed.

She was also extremely excited to be on the same track as one of her idols.

Rio 2 is in theaters now!

"You should go see Rio 2, because it's #1 in the box office so something must be good about it, and also you'll get to see a lot of fun animals," she said. "There's so much funny in this movie!"

She added that it's also a must-see because of its huge cast of stars, including Anne Hathaway, Jesse Eisenberg and Jamie Fox.

"And Bruno Mars," she added. "Oh my gosh, I have a huge crush on him. But it's just a great movie to take your family to or just to go to with your friends. It'll make you giggle, I guarantee it."

To keep updated on all of the latest news from Rachel Crow, be sure to check out her social pages below, and check out Rio 2 in a theater near you! Also become a part of our community at SweetyHigh.com to share your thoughts on all things Rio!