Rio 2 is available on DVD and Blu-ray today, so we caught up with star Rachel Crow to talk all things Rio, soccer and more! 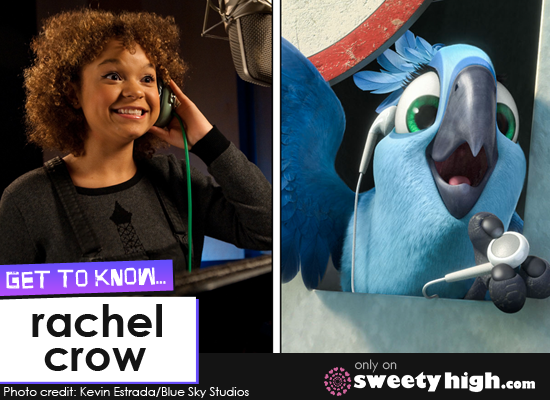 Since Rio 2 released in the theater in April, Rachel has working on a lot of things, including spending time in the studio to work on an album!

"I've also got some top secret projects that I'm not allowed to say just yet!" she teased.

We spoke to Rachel in the midst of the World Cup. In Rio 2, the blue Spix's macaws battle the Scarlet macaws in an epic soccer match in the forests of Brazil, mirroring the games!

In the film, Rachel voices the vivacious and music-loving Spix's macaw, Carla.  We asked Rachel which team Carla would be rooting for in the games!

"Carla would go all U.S.A.," Rachel explained. "Go 'Murica! But just to be clear, I'm not good at soccer or any sports, and Carla is probably not too sporty either."

But according to Rachel, Carla would still go all-out to cheer on her team, despite her lack of athleticism.

"She would be the most face painting, flag flailing, t-shirt wearing person," Rachel said.

Fans of Rachel's music have been particularly excited about her involvement in Rio 2!

"It's cool because they know me from X Factor," Rachel said. "When they come up and ask me what I'm doing now, and I tell them about Rio 2, they go, 'Oh my gosh! I love that movie!" They just freak out and it's really exciting."

Rio 2 comes out on DVD and Blu-ray today, July 15! Rachel urged viewers who haven't seen it yet to check it out!

"It's a really great family movie and there's a role for every age," she said. "With animation, it really doesn't really matter how old you are."

She said animation is particularly effective because it appeals to kids, parents and everyone in between!

"Kids love the animation because it's funny and it makes you giggle," Rachel explained. "It's sort of an altered reality. You have talking animals in most of them."

For non-kids, animation can can be just as appealing.

"For moms and dads, and even 20-year-olds, it brings you back to being a kid and makes you feel that kind of childish joy," she said. "That's why animation is so great."

Make sure to check out our previous interview with Rachel Crow on Rio 2 here, and follow Rachel on her social channels below, and join us at SweetyHigh.com to chat all about all things Rio!

P.S. In Rio 2, Carla even has her own iPod! We asked Rachel which songs she thought would currently be on Carla's playlist! Check them out below!