When it comes to creating all of your favorite films and TV series, there's so much going on behind the scenes that you rarely stop to think about, and though costuming is one of the most visible of these factors, it's also highly misunderstood.

Rafaella Rabinovich knows this well. She's a costume designer with credits including The Detour, Two Sentence Horror Stories and the hit rom-com To All the Boys I've Loved Before, as well as the new hit Netflix series, The Imperfects. The show follows Tilda, Abbi and Juan, who each gain unwanted (and somewhat monstrous) side effects after undergoing experimental gene therapy, and team up to track down the doctor responsible in order to have him make them human again.

We're loving the first season of the show, and we had the opportunity to hop on a Zoom call with Rafaella to learn all about her work as a costume designer, what makes the costumes in The Imperfects so special and even how her ADHD is sometimes a benefit when it comes to her busy work schedule. Keep scrolling to discover everything she shared with us.

Sweety High: What does the role of a costume designer actually entail? How much time does the costuming team get to prepare before shooting actually starts?

Rafaella Rabinovich: On The Imperfects, we had four weeks of prep, with about half of the script already written—though typically, these things go through a few rewrites as we go. In prep for costuming, we will read the scripts and break them down. It takes a village, and I have an incredible team of people who help to facilitate it. We look at things like budget, and while all of these things are happening, I have conversations with directors, producers and showrunners about their vision. How do they see the characters, and how does it match what I see for them? From there, I work on mood and vision boards and sketch a variety of different things before presenting them. It's a cumulative conversation that goes back and forth. A lot of the costuming depends not just on the character's vibe, but also the character's intention in the script. We have conversations about things like stunts, doubles, what space they're going to be in, what needs to be done and how many script days they're going to be in that outfit.

Then we go into the fitting stages. We either shop pieces or build them ourselves, essentially. Instead of just shopping for the clothing we use in the character's outfit, we'll often get things and modify them. We dye them, we break them down, or we find fabrics (or make them ourselves) and then go into the process of building. Then we go into the actual process of fittings before there are further conversations with the producers and directors. We share our intentions for the outfits, like if I'd like to see one outfit play in a specific scene. Sometimes, that's based on an A to Z conversation I've had with a director. Sometimes, it'll just be that the general vibe of the character is that they're preppy, so I offer a variety of different ideas around that. Then, when things get approved (or don't), we go on from there. It's an ongoing wheel of every step you need to get the looks to camera. 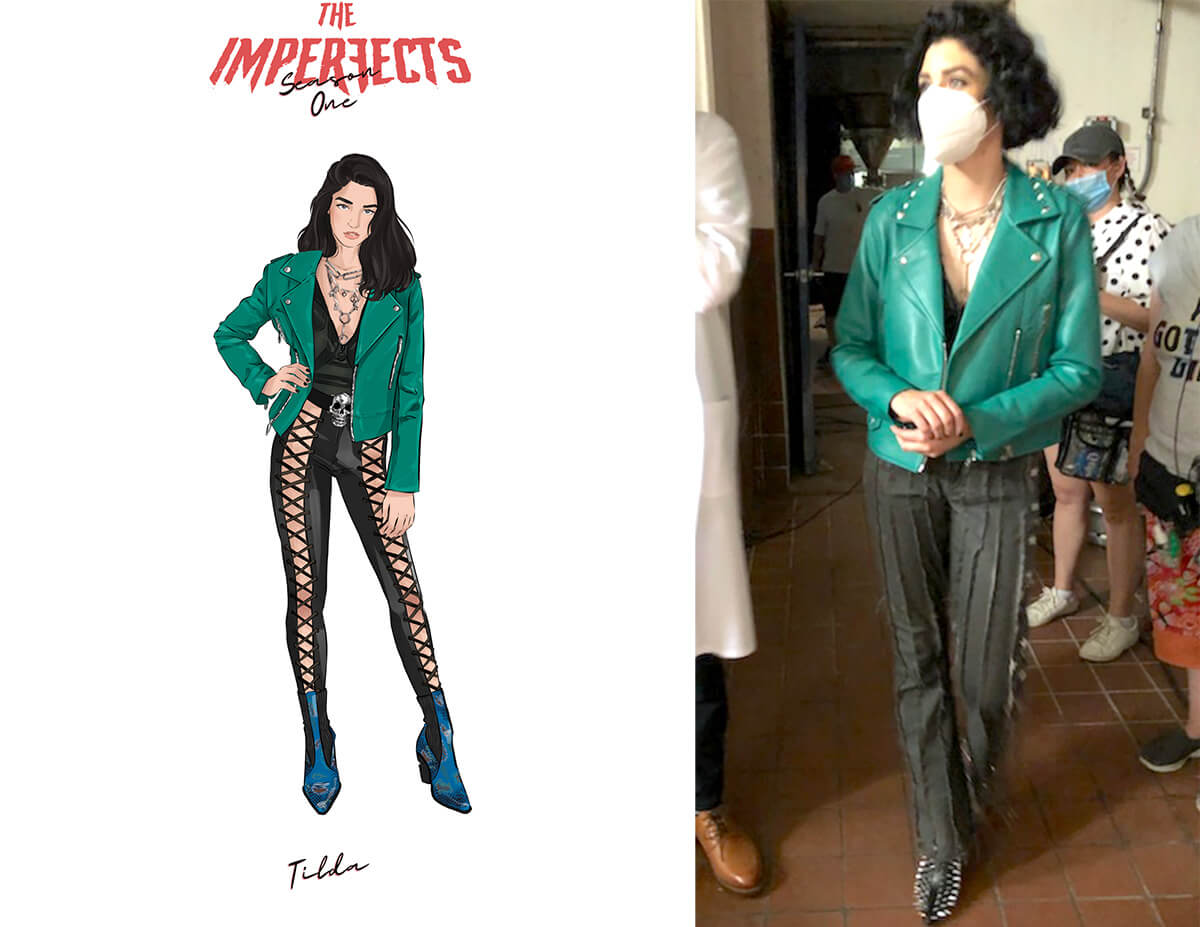 Also read about: 36 Witchy Captions From Hocus Pocus 2 to Use as Your Next Instagram Caption

SH: That sounds like it could get quite chaotic, just going along with the punches on a production that changes day-to-day.

RR: It is probably one of the most hectic departments in film, because we deal with each and every department individually, as well as the actors. There are a lot of things we have to take into consideration, like having to wait for casting to happen. Sometimes things happen at the last minute. If we're bringing someone in from the United States, you have to take into consideration when they're flying in. Sometimes it helps that I have ADHD, because it helps me be in five different places at once—but it also requires me to be in five different places at once.

SH: What do you think are the biggest misconceptions people have about your work when they hear you're a costume designer?

RR: I think people assume our job is just putting clothes on people. They think we're stylists, that we're just playing dress-up. It's so much more than that. There are so many factors on top of what I already mentioned. What's the longevity of the outfit? Who's going to be wearing it? How quickly can we cast the actor and get them to come in? There are so many things that happen in the middle of that. What's available? What's not? What's going to get approved, and what looks good on camera? What is everybody else wearing? Because it's a composition of colors. Sometimes it's relative, but you can't necessarily have everyone wearing black. You can almost never have anybody wear black because it doesn't shoot well on camera.

That's the biggest misconception, that it must always be so much fun and that it's not physically hard work. It is. Also, I think people are surprised by the size of the costume department and the variety of different positions you can have within it. For The Imperfects, we had 16 people. Considering how stunt-heavy the show was—and I would also consider it to be very stylized—we could probably have used a couple more bodies, but the size was typical. We had our people on set, in the office, our shoppers on the road, and people manufacturing things we would get custom-made in different shops. 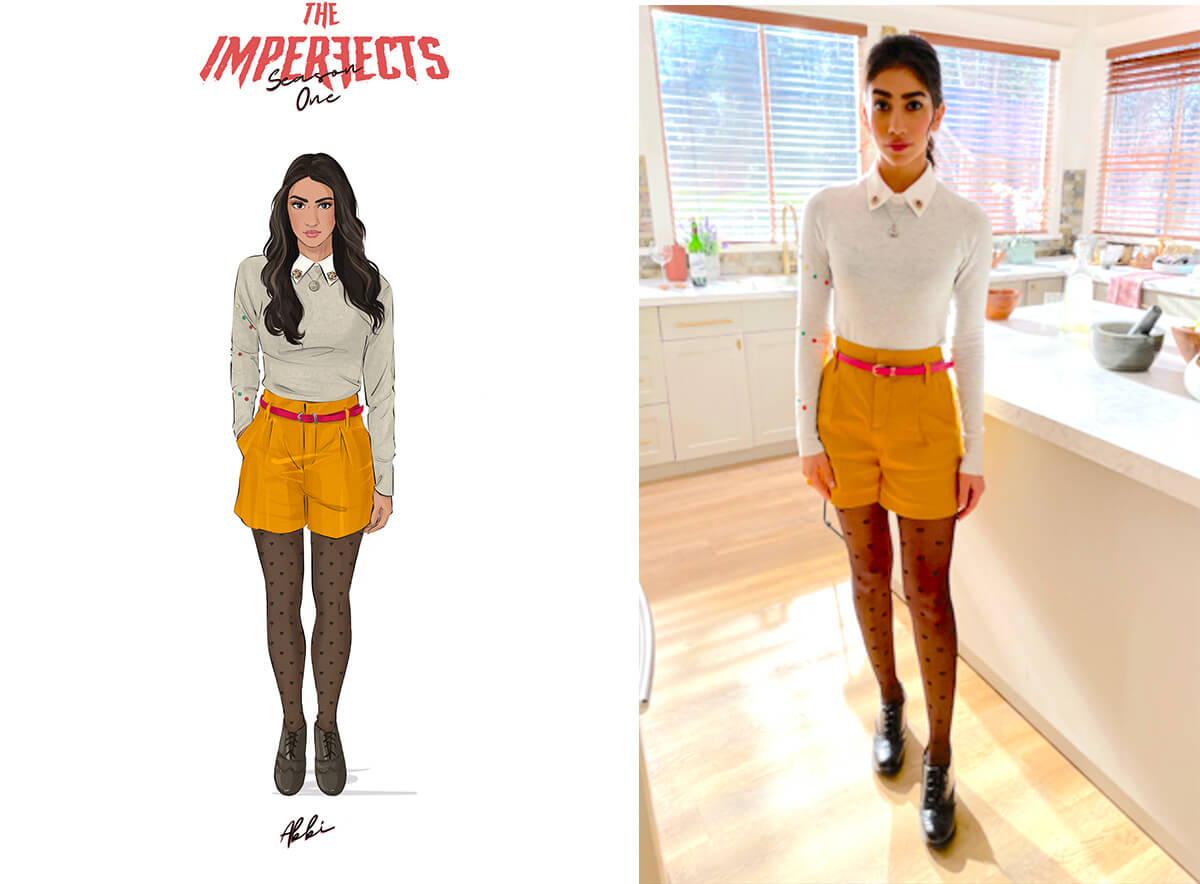 SH: Speaking of that stylization, from the very first scene of The Imperfects you get a strong sense of Tilda, Abbi and Juan's characters from their costuming. How important is it to you for that to be clear from the start of a show?

RR: What's important to me, at the end of the day, is the show and what serves the show best. It's not about me. It happens to be that on this show, the costuming was a tool to help define the characters, and it really helped to serve the purpose of telling the story in a way that could help cultivate what we were trying to show. It's important for me for costumes to serve the story, as well as the character. In this case, I was super lucky that we were able to hone in and give it a really specific feel. Sometimes what happens is you wind up having a general language for a show. Here, it's like each and every character within that language has their own dialect that really belongs to them. There were unspoken rules around the style, while it was also very clear.

Also read about: 31 Quotes From The Summer I Turned Pretty That Make Great Instagram Captions

SH: Costuming can also be effective in conveying character arcs. For example, Abbi's looks start very preppy, but seem to soften and get more casual by the end of the season. Was that an intentional choice?

RR: Absolutely. All of those choices are very intentional, so I'm happy you saw that! She definitely becomes practical in a different way. I think it has a lot to do with her relationship to the outside world. She's walking into it with a new fear as an asexual individual, being a succubus and being engulfed in a relationship with two other people, dealing with some other really, really big stuff and kind of becoming a squad. She becomes more comfortable. She's very fussy, very by-the-book within her textures and her colors and her traditions. I think she grows and she opens up to other opportunities. A lot of it had to do with the script and the fact that she had to learn to become more practical.

SH: Was there a character outside of the main trio that you had the most fun designing for?

RR: That's hard! It's never going to be just one. I absolutely adored Sarkov. I had a lot of fun with him, which I know sounds kind of funny. He's a male character in button-ups. But there's something very timeless to him. I really enjoyed that. I love period costuming, and there was this opportunity to suddenly give different glimpses into his character, and if you've seen the show, you understand why his being timeless is so relevant. The use of textures and colors with him specifically, and even the silhouettes, were designed to make him something else, but at the same time, something that doesn't bother you to look at.

I adored Juan's girlfriend, Darcy's wardrobe. I thought it was beautiful and I'm super grateful that Dennis Heaton, our incredible showrunner, just let me run with it. It was kind of my goth girl dream.

All the builds we did for Finch were also a lot of fun, and out of loving all of those builds, I also loved everything we did for Burke, because there was a consistent relationship visually between them, with the pearls that Burke wears. You start seeing Finch wearing pearl earrings in particular moments. I could go on and on!

SH: How are the approaches different between a longer-form series like The Imperfects to a film, such as To All the Boys I've Loved Before?

RR: It's working on something for two months versus working on it for six months. Usually, with a feature, you block-shoot most of the time. You're shooting the entire feature all at the same time, and it's often related to the different locations. For instance, you'll shoot everything shot at the house at once. Occasionally, you'll block-shoot a series, but most of the time, that doesn't happen. In this case, you block-shoot two episodes at a time, so it makes planning very different. Usually, with a feature, you know what's coming because you've read the entire feature script. With a series, you don't always have all of the episodes at a time. You plan differently. For budget, for crew. For everything.

Also read about: The To All the Boys I've Loved Before Character You Are, Based on Your Sign

SH: It's interesting because both The Imperfects and To All the Boys I've Loved Before are teen-oriented, with quite stylized looks, but their DNA is quite different. How do you work with directors to guide those different aesthetics within similar parameters?

RR: As far as I'm concerned, it's the director's sandbox, and I'm there to play in it. I modify it however it's needed, and usually I get hired because I have a specific aesthetic that's relevant to them. Of course, part of being a good costume designer is not being attached to what I want. It's all about making it into what they want. For example, with To All the Boys, one of the things we did entirely as a creative team, with the production design as well, was to work around a very specific color palette. We used the teal, the magenta and the yellow. To All the Boys was also based on a book, so it already came with so many people having an expectation of what it would look like. With The Imperfects, the approach was different. It was definitely more about breaking down the characters to their very specific stories.

What will you be watching this fall? Click HERE to check out all of our most anticipated films of the season.