There's an emoji for everything nowadays.

From superheroes to vampires to mini Frankensteins, you can find a visual representation for almost anything you could ever imagine. But that certainly wasn't always the case. When emojis were first released in 2010, the range of icons was much more limited. Not only that, but there were also quite a few odd images that had us scratching our heads at the creators of these emojis.

Keep scrolling for our definitive ranking of the 10 strangest OG emojis, from odd to straight-up bizarre. 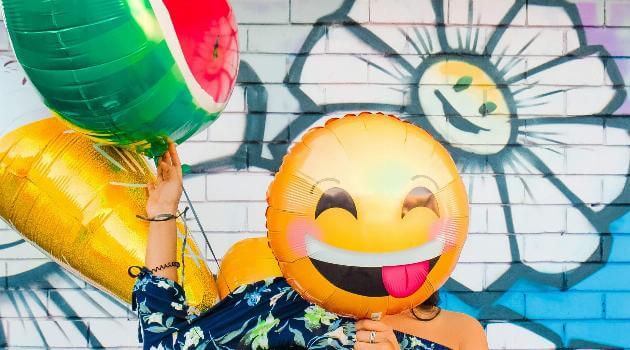 In the very last place on our list of strangest emojis is this girl with her arms above her head. But according to the official emoji description, she doesn't just have her arms above her head. Oh, no—she's actually gesturing "OK." If you sent this to one of your friends in the place of "ok" do you think they would know what you mean? We doubt it. Although this emoji has a normal appearance, it's on our list of strangest emojis because it's completely at odds with its description, and we just can't forgive that.

Until this exact moment, we never knew what this guy was doing. He looks like he's maybe embarrassed? Or cowering in fear? Either way, "person bowing" would have been the very last thing that we would have guessed. In what situation would you need an emoji of someone bowing? This emoji isn't the weirdest on the list, but it's certainly a little odd.

The new moon face has slowly grown in popularity, but we still think it's an incredibly odd emoji. It looks far too suspicious, almost like it's hiding some sort of secret that it doesn't want the rest of us to know. We all know about the man on the moon, but somehow we imagined him looking a little more friendly and a little less creepy.

This odd emoji is named the anger symbol, which makes less than zero sense. It looks like four red bananas arranged in a square. How does a curvy square symbolize anger? Has anyone ever used this emoji in a moment of rage? Sorry, but we just don't get it.

Ah, the pager. We have to add this emoji to our list because it's an obsolete technology. No one uses pagers anymore. When emojis were first released, pagers were already long-forgotten. Yet the emoji makers still went to the trouble to create an entire image for a technology most people have forgotten. We like the effort they put into this graphic, but we promise no one's using the pager.

This emoji is simply named "curly loop." That's it. There's nothing more to it, it's just a curly loop. Why would you need to include a curly loop in your text message? We don't know, but it's there if you need it. The utility of this emoji is totally confusing. Why create a simple curly loop just to have it? The random inclusion of this odd symbol feels pretty darn peculiar to us.

The first time we saw this emoji, we were totally confused. Is it some sort of jellyfish? But if that's the case, what's the paper hanging off of the end? Well, the emoji is actually a glass wind chime, which is a decorative object found all over Japan. We love the cultural significance, but we have to rank this emoji closer to the bizarre end of our list, mostly because we would have never actually guessed what it is.

This emoji is named the ogre, but it looks nothing like an ogre. The bright red face and random bits of hair look more like some sort of deranged lion. If we've ever found a use for this emoji, we certainly don't remember it.

Following closely after the ogre is the goblin emoji. Much like the ogre, we're not actually sure what kind of goblin this emoji was trying to capture. It looks like a bright red version of those theater masks, complete with a long, pointy nose and severe mustache. Honestly, just looking at it sort of creeps us out. It has to be the most bizarre emoji we've ever seen.

If you can't get enough of emojis, click HERE to find out what your most-used emoji says about you.