The Raspberry Pi 400 Is a $70 PC Built Into a Compact, Stylish Keyboard, and We're Obsessed

While having a personal computer is pretty much a necessity in this day and age, their prices can be super prohibitive.

Not everyone has thousands, or even multiple hundreds, of dollars to throw around on computers for the family—especially when every kid and parent needs a computer of their own for working and schooling from home. So when I stumbled upon the Raspberry Pi 400, a $70 PC fully built into a small keyboard, it immediately caught my interest. Was it really possible that this tiny thing could be a complete computer?

I reached out to the company, who generously provided me with a sample so I could find out for myself. In a few weeks with the Raspberry Pi 400, here's what I've discovered:

While most keyboards are full of empty space, the folks at Raspberry Pi did the unthinkable with their Raspberry Pi 400 by cramming everything needed for a full desktop computer right into the keyboard. The system runs on Linux and has three USB ports, two HDMI ports and built-in Bluetooth and wifi functionality for internet connectivity, as well as an Ethernet port. That keyboard itself sells for $70.

However, I recommend the product I was sent—The Raspberry Pi 400 Desktop – Full Computer Kit—which sells for $100. This kit comes with the integrated keyboard, plus most of the other goodies you need to get the thing up and running. That includes a pre-burned 8GB Micro SD card with the Raspberry Pi OS, a power supply, a USB mouse, a one-meter Micro HDMI to HDMI cable and The Official Raspberry Pi Beginner's Guide. 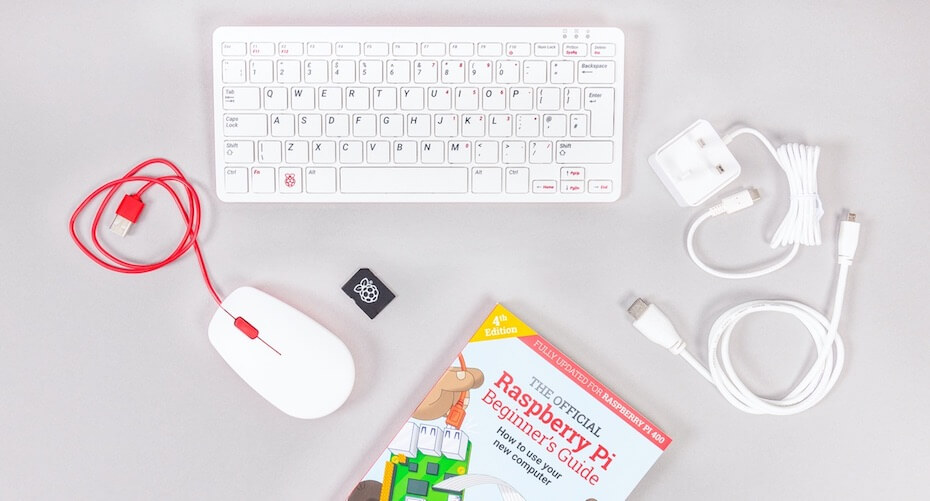 I was so excited to get started with My Raspberry Pi 400 from the moment it arrived. It came in such a cute and compact box, and everything inside looked great. The white and hot pink aesthetic of the keyboard and mouse were eye-catching, and while both were lightweight, they also felt sturdy and well-crafted.

But I ran into my first little snag during setup. The one necessary thing not included in the Full Desktop Kit is a monitor, and upon tinkering around with the different monitors I own, I quickly realized that none of them have a full-sized HDMI input. That wasn't a huge deal—a Micro HDMI to Mini HDMI cable was less than $10 on Amazon—but it did mean I'd have to wait a couple of days before setting up my ideal desktop experience.

The one full-sized HDMI I did have at the ready was the TV in my bedroom. While the included one-meter cable didn't give me a ton of slack in terms of setting everything up, it did work, and once I'd plugged that cable and the mouse in, I attached it to the power supply and everything booted up onto my TV.

To my delight, setup was super straightforward. I had to input the usual things—my country and language, a password and the like—and then once I set up to my local wifi network, it immediately connected to the internet for a software update to download everything necessary to get the computer running. That didn't take long at all, and then it was time to start using my new computer, somehow contained in one thin, sleek keyboard.

The very first thing I tested was the Chromium web browser, which felt very familiar to me as a typical Google Chrome user. I was able to sync it with my Google accounts and handily jump right into stuff like YouTube and Google Drive, with all of my video history and files immediately available. I found that it was easy to add new text documents and spreadsheets in Drive, and that YouTube videos loaded quickly. I was also able to watch streams and VODs on Twitch, so my academic and entertainment needs were squarely handled there. 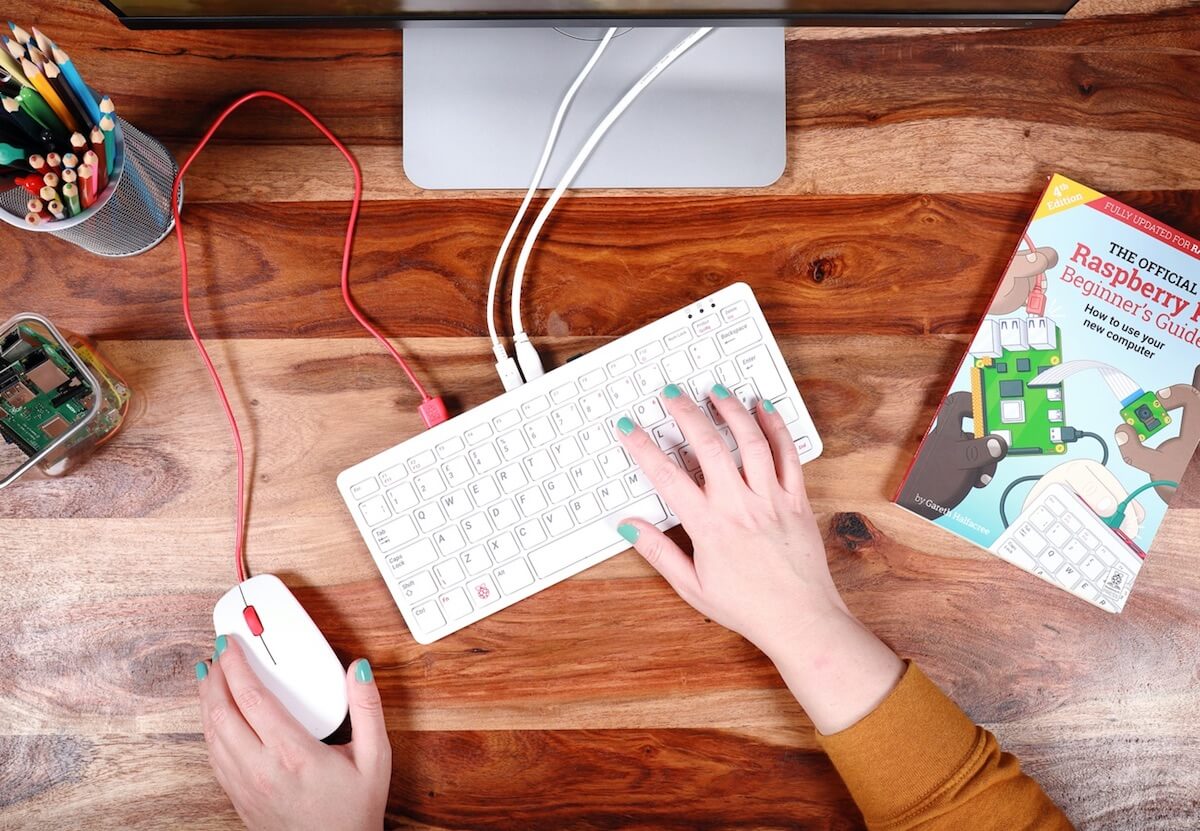 That made me wonder what else I might be able to do with this computer. Some digging around in the Preferences led me to Recommended Software, which allowed me to download preferred programs. Among the first things I downloaded were the free LibreBase Office software, which is basically like a Microsoft Office suite, and a stripped-down version of Minecraft specifically for Raspberry Pi. LibreBase allowed me to make text documents, spreadsheets and slideshow presentations, while Minecraft felt like the game's Bedrock Edition, focused on building rather than fighting and story.

If you're feeling adventurous or aren't finding what you're looking for under Recommended Software, you can even go online and find out what other software is available. For example, I found out I could install the photo editing program Gimp through the terminal, and I've since become obsessed with it.

The keyboard itself also feels great. While I'm used to keys that are a little bit taller and clickier than on the Raspberry Pi 400, I quickly found myself adapting to the change, and it was easy to type quickly and fluidly after practicing for just a few minutes.

However, my biggest issue probably came from being a Mac user. There are some subtle differences between the positioning of the keys on Macs and PCs—for example, the command and alt buttons being swapped—that can slow my typing considerably. Plus, the keyboard has a raspberry key that basically opens a Start menu. I hit this all the time thinking it's going to be a command key. Working around this will just be a matter of practice.

There are also small things I realized only after days of using the computer. For example, the keyboard itself has no speaker or audio jack, so if you want to listen to sound, you need an external monitor that supports it. My monitor does have speakers, as well as an audio jack, so I'm covered, but you may need to find your own workarounds depending on your accessories.

It also won't do everything that a typical PC can do. For example, I looked into installing Steam on the computer, and it just doesn't support it. While you can tinker with things on the back end to get it to run and play games, it doesn't play them well enough for that to be worth it. Plus, I'd worry about the memory even available on the Raspberry Pi.

The Micro SD card that comes with the kit is also an 8GB card, which really isn't that much memory. The guide book recommends upgrading to a 16GB card if you need the space. However, you should refer to its guidelines of compatible brands and sizes, since you don't want to buy anything you won't actually be able to use with the Raspberry Pi. While I'm mostly using mine for light word processing, intensive users might quickly find this to be pretty limiting.

There's also no power button on the thing. However, pushing the Function key plus F10 works as a power button for turning the Raspberry Pi on and off—even if this functionality isn't obvious to a new user. Until I discovered this, I was under the impression that any time I wanted to stop using it, I'd have to go to the Logout option and pick Shutdown, and then allow that process to complete before unplugging it.

I think it's a great little computer for an incredible price, and there's a lot that Raspberry Pi can do that I haven't yet delved into. For example, the guide contains some pretty comprehensive guides on learning how to program on Scratch 3 as well as Python, and even has lessons on physical computing. If you need to be on a webcam for school, Raspberry Pi also has camera modules. For $100, you really can't do better, and you can teach yourself a lot about computers and programming along the way.

With laptop computers being so expensive these days, and desktops costing even more, the Raspberry Pi 400 is an awesome, inexpensive substitute that does most of the work you'll want it to. While it's doesn't have all of the functionality of a Windows or Mac computer, it'll do almost everything a casual user needs.

Whether you typically use a Mac or a PC, it's not difficult to learn the ins and outs of the Raspberry Pi, and I've found that the stripped-down laptop actually helps when it comes to distraction-free writing and creating. Though the available storage is pretty small, I'm nowhere near using up all of it yet. As long as you have a compatible monitor and reliable internet access, you should have what you require to get it up and running for your schoolwork, YouTube viewing and other basic computing needs.

Going a little more high-powered with your accessories? Click HERE to read our review of Logitech G's gaming keyboards and mouses.