What's the Buzz About Raw Honey? We Tried Bee K'onscious to Find Out

In the past, I haven't been all that picky when it comes to honey. Most of the honey I consume comes out of a bear-shaped bottle, and besides splurging a couple times on raw honey at the farmer's market, I didn't think twice about where that honey comes from.

So when the folks behind Bee K'onscious Artisanal Honey contacted me and asked if I'd be interested in reviewing their offerings, I was curious. Not only was it an opportunity to try some potentially tasty honey varieties, but I was sure I'd learn a ton about the product and how it's made in the process. I took them up on their offer, and I was really glad I did.

Bee K'onscious calls its high-quality, 100% raw honey "nature's superfood." Their unprocessed, single-source honey is made using ethical and sustainable practices, and is fully traceable back to its beekeepers from around the world. You can even scan a QR code on each bottle to trace the honey back to its source, learning where the honey was harvested, as well as the beekeeper's name, and you can view images of the beekeeper and hives. By keeping their bees healthy and happy, they also strive to aid the natural pollination of food crops.

It's also completely unprocessed, as opposed to a lot of the honey available in grocery stores today, which is packed with additives such as corn syrup. That's good because raw honey is said to contain a number of vitamins, minerals and antioxidants, while treating all kinds of ailments, including alleviating allergies, suppressing coughs and aiding in sleep. It also includes 17 grams of carbs in the form of unprocessed sugars per serving, which the company says provides a reliable burst of energy.

Bee K'onscious honey retails for $18 per jar, which are 11 oz. or 12 oz. depending on the variety, and online shipping is free.

I began with the clover honey, sourced from Montana, because that's the variety I'm most familiar with. The vast majority of grocery store varieties brand themselves as clover honey, but they didn't at all prepare me for what Bee K'onscious had in store.

It gets pretty chilly where I live, so when my jars of honey arrived, two out of the three had crystallized, which basically means the honey inside had hardened into a paste. The clover was among them, and while all it takes to dissolve the crystals and get the honey back to its liquid form is heating the jar slightly in warm water, I first wanted to take advantage of the crystallization, as I'm a weirdo who loves crystallized honey.

I happened to have some freshly baked bread at the ready when it was time for my taste test, and decided to mix the crystallized honey with peanut butter and then slather it all over the sliced bread. With the warmth of the bread, the honey stayed solid in parts and melted in others, resulting in a sweet and satisfying treat. The honey tasted richer than any I'd had before, and I felt quite full by the time I'd finished the bread.

Of course, I had to taste it by itself, as well. I was truly surprised by the depth of the flavor. It almost tasted like it was spiced with cinnamon, with a slight vanilla finish. It was anything but the neutral clover honey taste I was used to. When I finally got around to un-crystallizing it, it remained just as tasty. In liquid form, my favorite use for it is drizzling over vanilla ice cream. 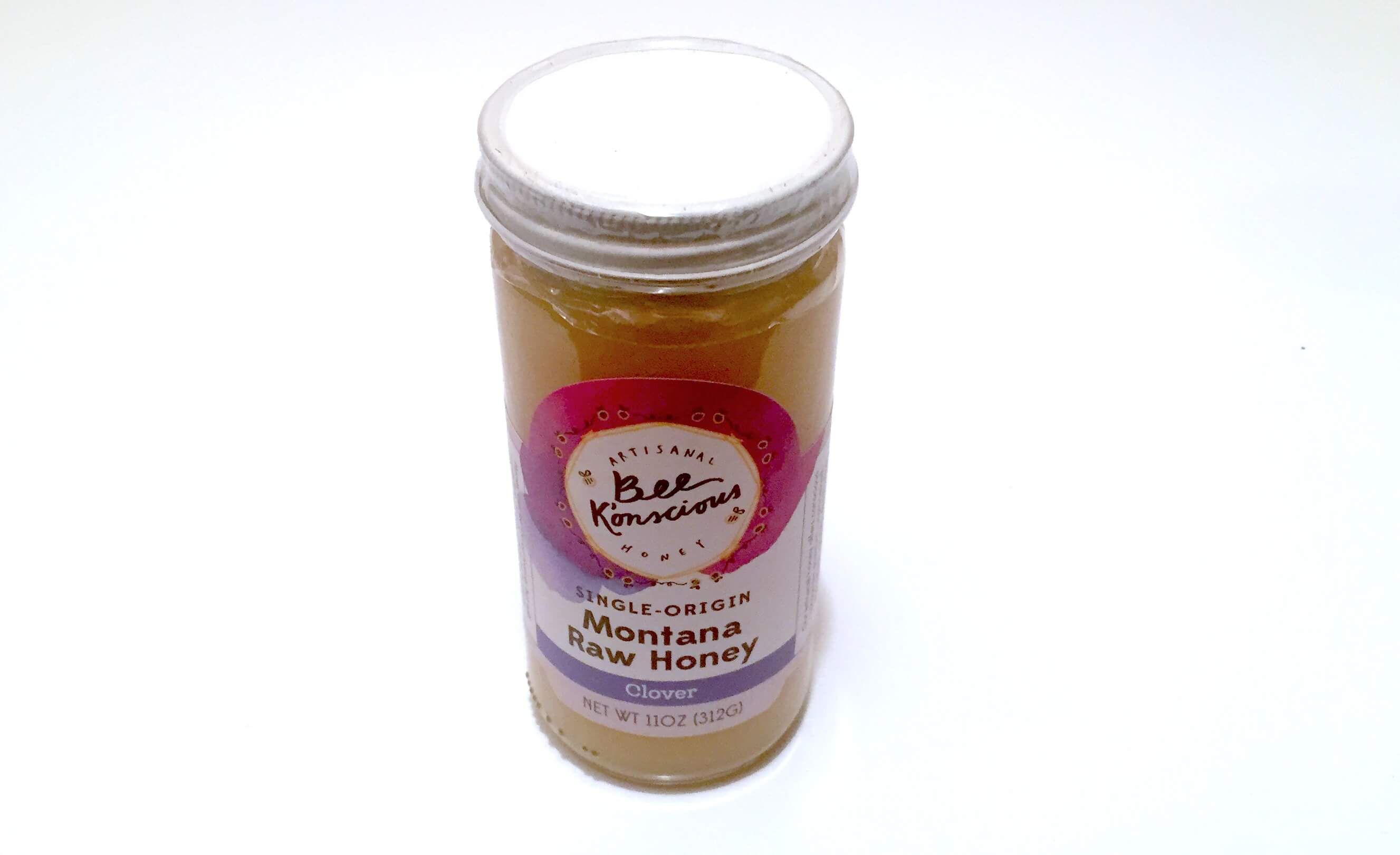 Next, it was time to try the sage honey. Clearly, this one had the lowest solidifying point, because it arrived in a liquid state, and even keeping it in the room where I work (which typically hovers around 60°), it's never crystallized. Because it flowed freely, I tried this honey first in a fruity herbal tea and loved how just a little went a long way in terms of sweetening.

On its own, I was delighted to find that the sage honey had a completely different flavor profile than the clover I'd tried before it. This one was deeper and earthier, with a slight herbal aftertaste that lingered long after I'd tasted it. This contrast brings out the notes in other flavors, which is why I've come to love splashing it over fresh berries. Of the three honeys, it's by far the one I've used the most. 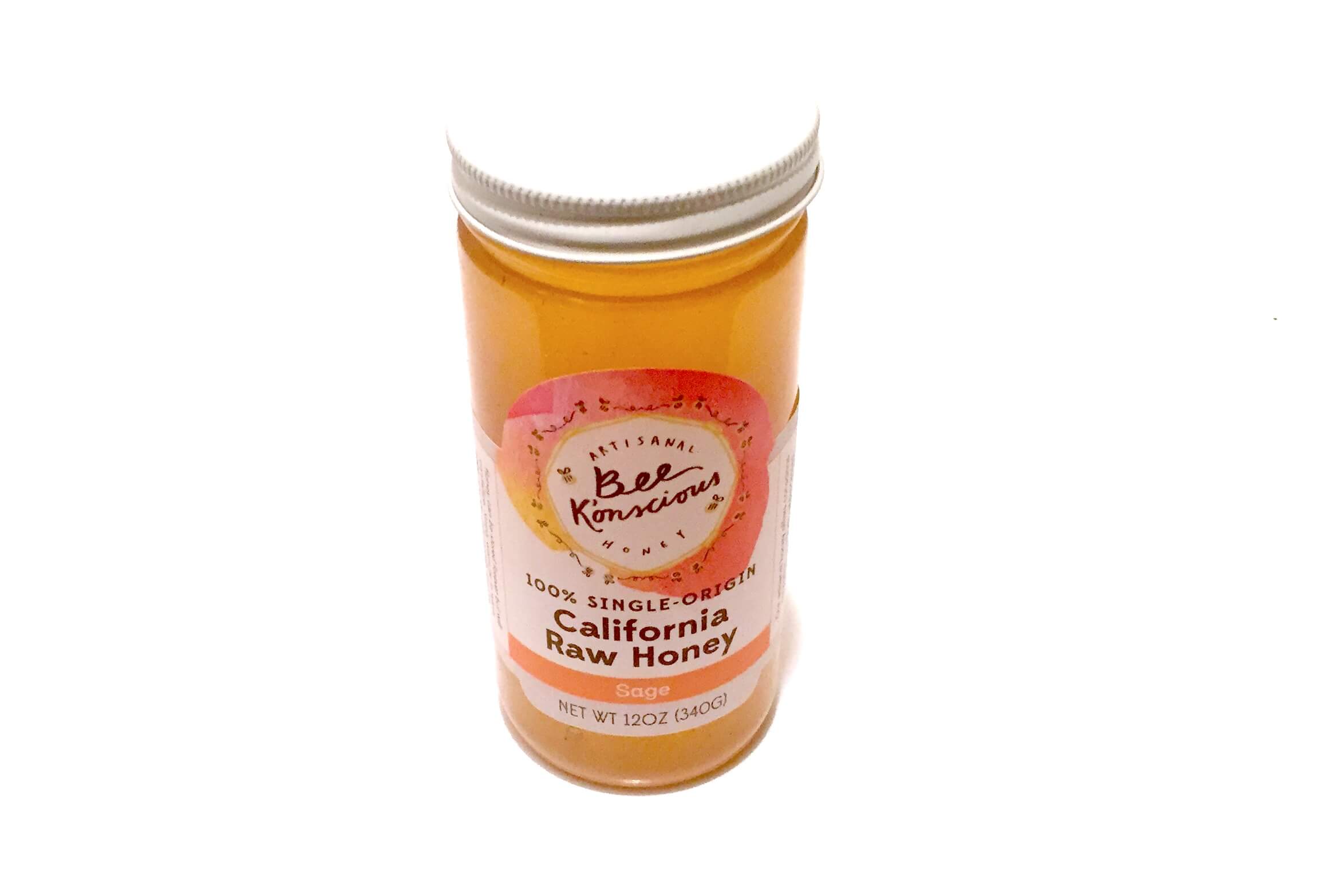 I'd never heard of the Brazilian cipo uva plant before this tasting, which piqued my curiosity, but apparently the words translate simply to "grape vine." This honey also arrived crystallized, and before liquifying it, I needed to try it in its solid state. A small spoonful revealed that this one had a more floral profile than the others. It was even more herbal than the sage, making it taste almost medicinal, but not in a bad way. The taste also reminded me a bit of sweet dried fruit.

After I got it back to liquid honey, it was time to test it in context. While it was good with sweet fruit, I liked it even better paired against sharper flavors, like cheeses, or to bring out the flavor of sour apples. Of the three, it's probably the one I'll get the least use out of, but for those special occasions, it can really highlight unique and delicate flavors in a great way. 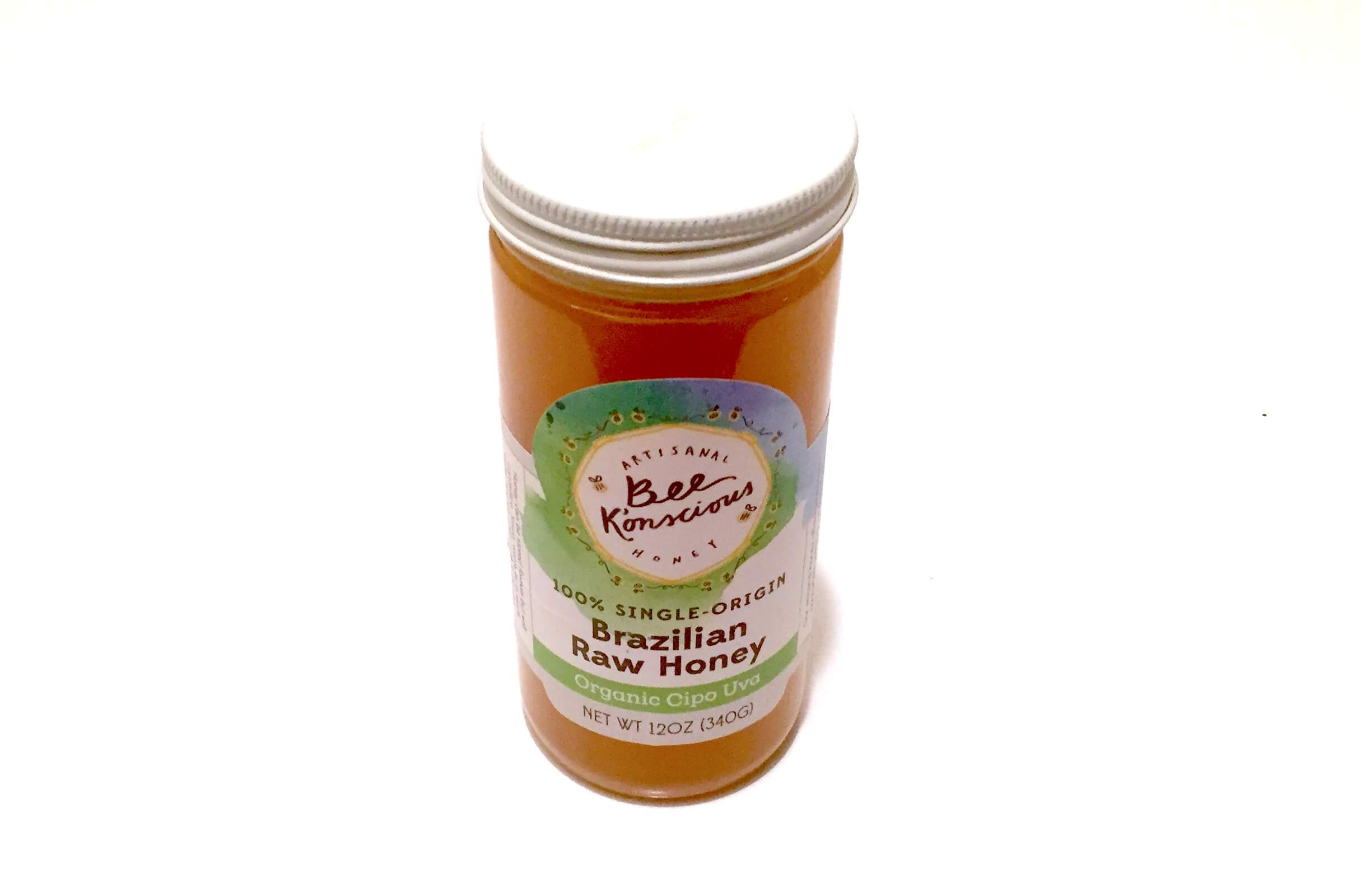 Trying Bee K'onscious' unique and varied honeys proved to me once and for all that the pollen that goes into honey has a massive effect in the final product. Even looking at the jars and the different tones in the color made it clear to me that honey is not all alike, and I'm really happy that these three jars will likely last me a long while.

And while eating all kinds of honeyed snacks surely packed a lot of sugar, I never felt any kind of crash after indulging quite a bit in all three varieties. I don't know if it was the amount I had, or the simple fact that this is completely natural sugar, but that surprised me. The sustainability angle, and the transparency of the company are other reasons I'd be happy to buy from them again.

If there's one thing that would make me hesitate, it would be the price. $18 a jar is a bit steep, even when I know I'm paying for a top-quality product in a generously sized package. And did I mention that honey never goes bad? These honeys helped me to finally understand why Winnie the Pooh is such a huge fan of the raw stuff. If you're interested in a deluxe honey experience, Bee K'onscious is calling your name. 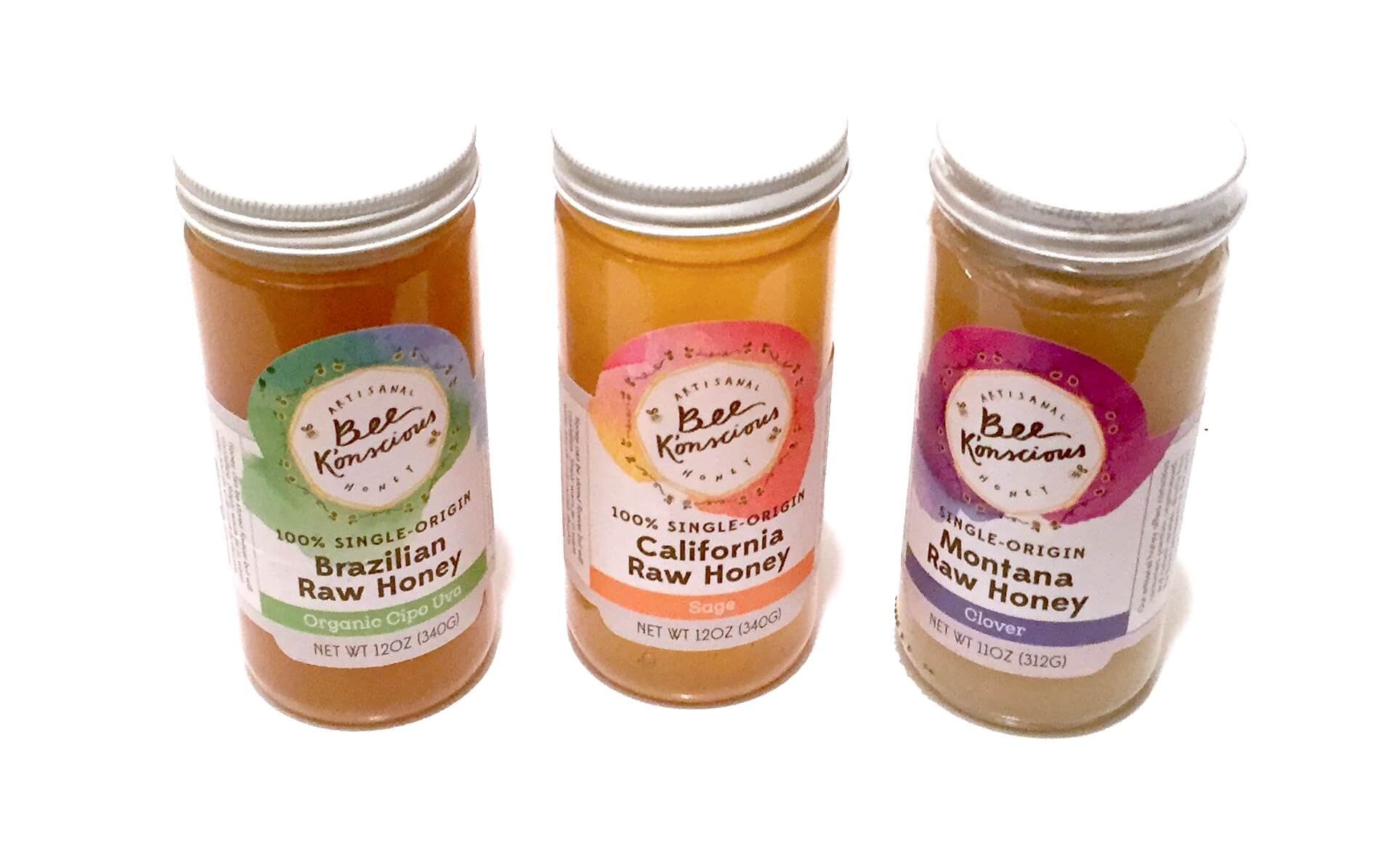 If you're curious about how honey is made, click HERE to read our review of Bee Simulator on the Nintendo Switch.