Reed Deming On All Things Musical!

Reed Deming is a 15-year-old artist who catapulted to fame after appearing on The X Factor. Ever since, his fans have been constantly growing in number. 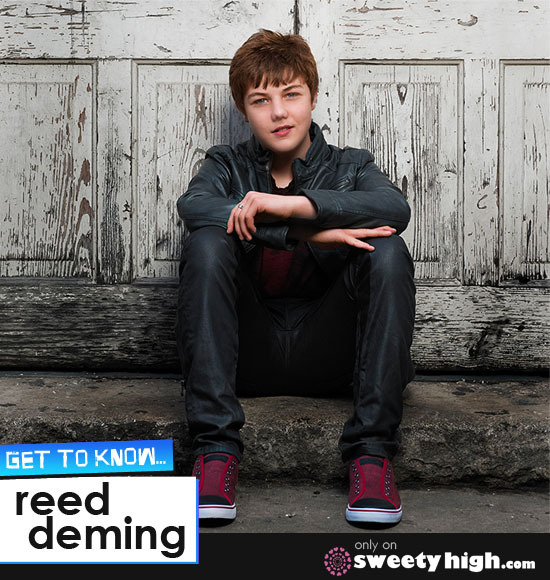 We recently spoke with Reed about his musical beginnings and his big plans for the future!

Reed admits he doesn't come from a particularly musical family.

"My passion for music really came out of nowhere," he said.

When he was just 10, he attended an artist development camp in Dallas, Texas.

By the time he returned home, he had had an epiphany.

"Music was what I wanted to do for the rest of my life," he said.

Reed wrote his first song when he was 11 years old. He admits his writing wasn't strong in the beginning.

"It was garbage," Reed said, "but it was a really important moment for me as an artist. In the years that followed, I continued to experience things and turned them into songs."

Now that he is 15, his experience has allowed his songwriting to become more sophisticated.

It also doesn't take much to inspire Reed to write.

"I can still find a lot of inspiration from experiencing a powerful moment, or hearing a phrase that's interesting," he said. 'I'll jot it down, hear a hook, and the rest comes naturally."

Many of Reed's biggest musical influences make music in the pop-rock genre.

"Ryan Tedder from One Republic is absolutely incredible," Reed said. "Being not just a singer, but a songwriter, producer, and multi-instrumentalist is very impressive."

In 2012, Reed auditioned for the second season of The X Factor U.S.A.

He was pushed through by judges Simon Cowell, L.A. Reid, Britney Spears and Demi Lovato, and made it into the top 24 on Britney Spears' teens team!

He also put together his 6-track EP, Ridiculous, last spring.

"It debuted in June 2013 and sold by the thousands, thanks to the incredible support from my fans," Reed said. "Without them, I wouldn't be where I am today."

Reed described Ridiculous as, "a sneak peek; a footprint in the direction I want to take my career."

He took one big step in that direction when he performed at the Celebrate San Antonio event on New Year's Eve to ring in 2014! Reed said it was the most memorable moment of his career so far.

"I was in front of 150,000 people in my hometown, had a Grammy winner, Chris Perez, backing me up on guitar, and I was singing songs that I helped put together," Reed said.

Next, he is planning to focus on making more music.

"I love putting out new material and can't wait for the upcoming album!" he said. "Also, expect more tours, merch, and crazy shenanigans!"

In the future he aims to set out on a world tour, put out a few albums and "possibly win a Grammy or two!" he said.

"I want to thank the fans for all the incredible support," he said. "It means the world to me."

We can't wait to see where his career is headed next! To stay updated on all of the latest from Reed Deming, check out his social channels below. Also join us at Sweety High to tell us about your favorite new artists!