How to Remember the Meanings of Minor Arcana in Tarot

When you're getting into reading tarot, the first (and possibly largest) obstacle is simply learning how to interpret the cards.

With 78 tarot cards in total, that is a lot of information to remember. In fact, even after years of daily tarot pulls, we still frequently refer to guides to jog our memories, and we don't think there's any shame in it.

But that doesn't mean you should give up on trying to learn the cards and their meanings entirely. For us, the toughest ones to remember are the 56 minor arcana—the suit cards. The four suits are wands, cups, swords and pentacles, each of which have 14 cards—ace through 10, plus a page, knight, queen and king, and below, you'll find some helpful tips to help you remember the meanings of the suits and numbers of these cards.

The suit of wands (or in some cases, staffs or staves) is associated with the element of fire. That usually means these cards pertain to things like travel, creative sparks, energy and inspiration. They show up when possibilities are endless, new opportunities are on the horizon and a little perseverance will get you exactly what you're looking for. 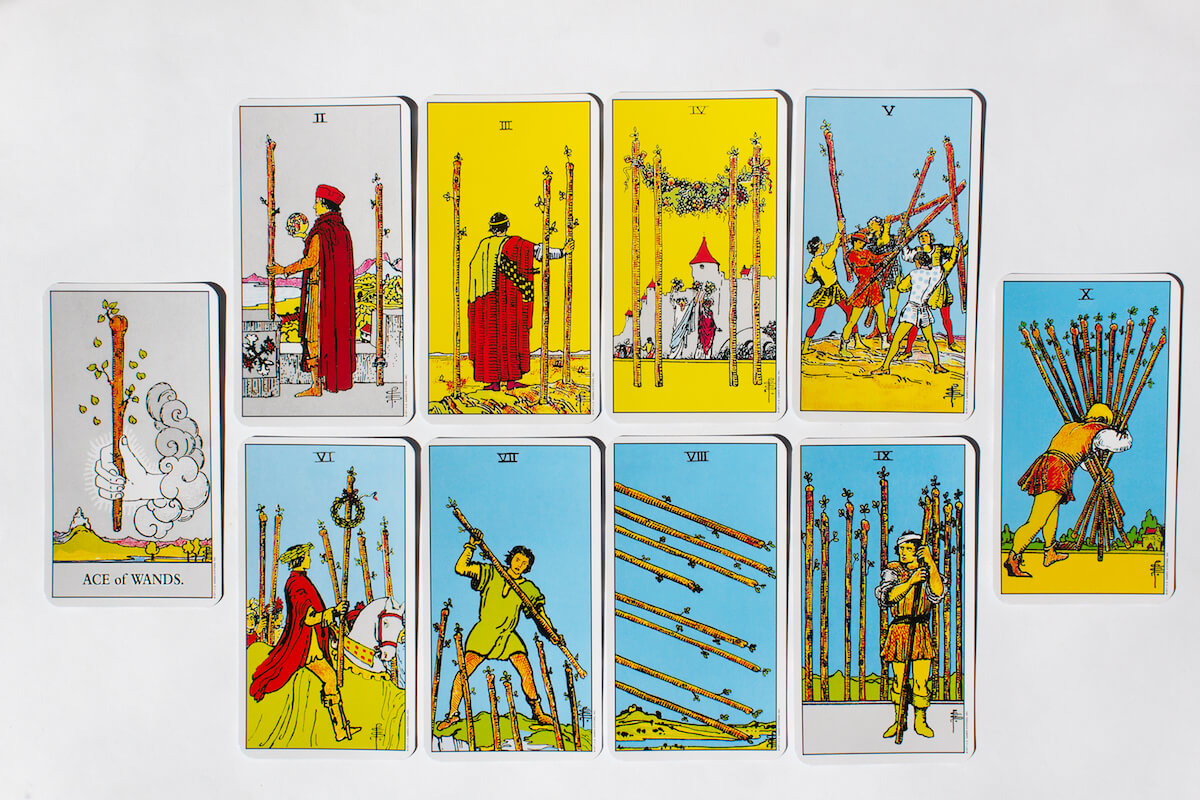 The suit of cups (also known as chalices or hearts) represents the element of water. It pertains to emotions, intuition and the relationships we cultivate with others. Cups cards appear when partnerships are forming, new choices are appearing and you should be keeping your eyes open for your fate to present itself. 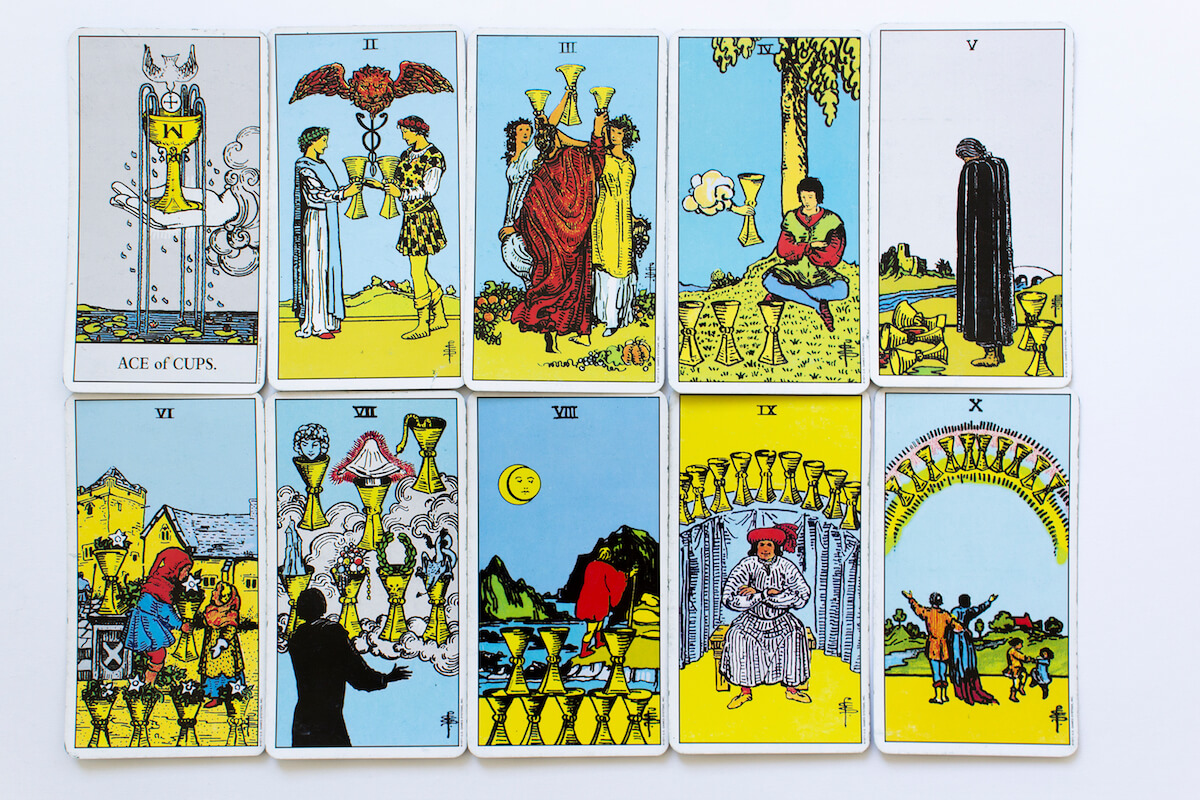 In tarot, swords, represented by the element of air, are multi-faceted, and often-double edged. Rather than a suit of strength, it's a suit of intelligence, decision-making and the balance between our heads and our hearts. When it appears, it often means a big decision is in front of you and that you're dealing with heavy matters of the heart. 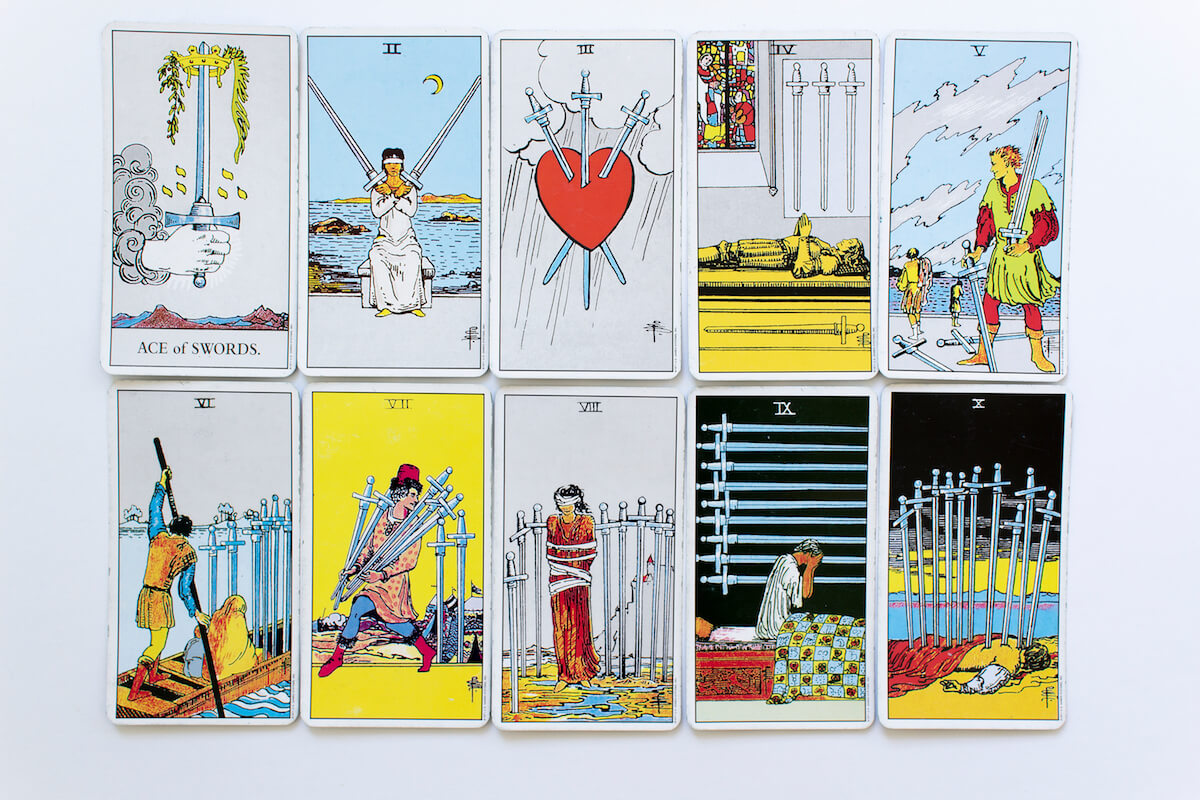 Lastly, pentacles are tied to the element of earth, and they represent your earthly possessions. Most often, this suit appears in tarot readings to foretell gifts, warn about the thing you might soon be losing and let you know when it's time to treat yourself to something well-earned. 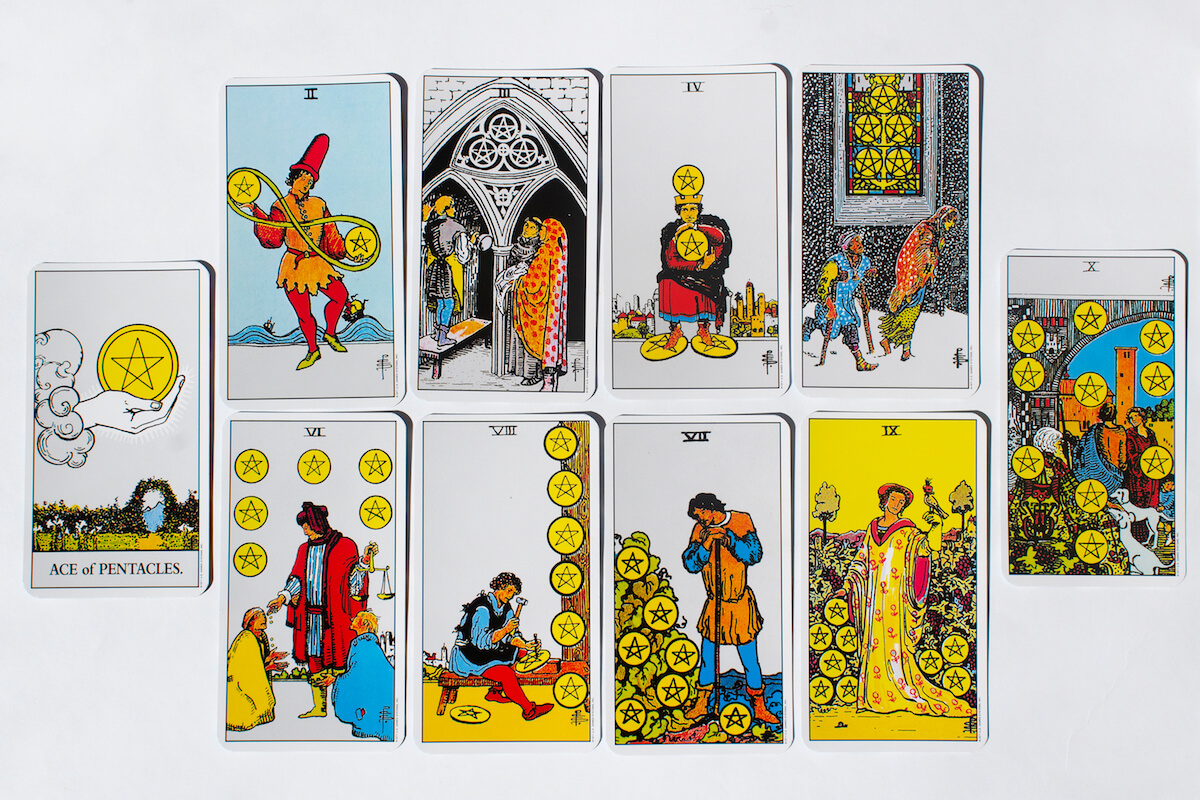 As the first card in each suit, the ace usually represents fresh starts, new beginnings and everything that is yet to come. When you see it, you should open yourself to possibilities you hadn't considered before. While nothing is guaranteed, these cards mean you can make something remarkable happen out of nothing. 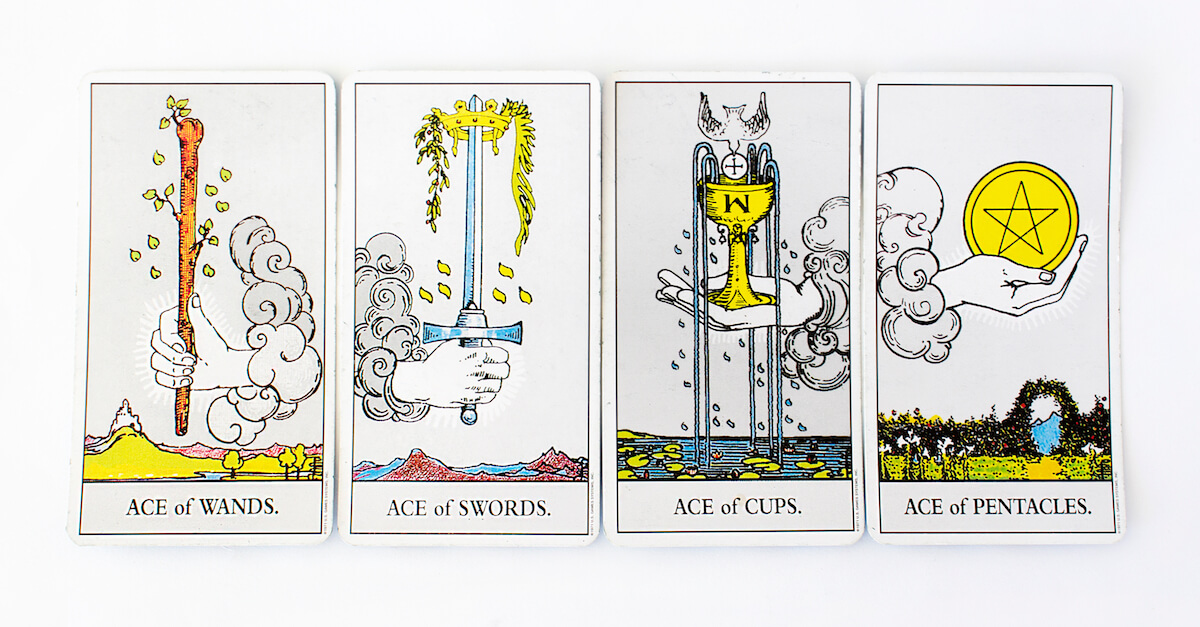 Twos in tarot generally represent pairs, whether you're dealing with the two people involved in a relationship, or the two opposing sides you're struggling to decide between. It's also a sign to find the balance in your life and look at things from a new perspective.

The number three is generally a symbol of one thing coming to a conclusion so that a newer, better thing can take its place. You're always growing and moving forward, and this is a good sign that you're getting closer and closer to your dreams. Often, this involves new teamwork and collaboration that wasn't possible before. Think of the three as a finish, a beginning and the movement forward.

In tarot, the number four typically represents that you're building a strong foundation. We like to think of it as building upon four sturdy legs as you work toward the future. This is the time to start making your dreams real by laying the groundwork for them and taking action in order to make them more than just ideas.

Some people have come to dread seeing a five in their tarot readings, but just because the number represents conflict and sometimes scary change doesn't mean that it spells doom. When these cards come up, it's important to remember that instability often leads to being able to grow into the person you were destined to become. Challenges are an opportunity, so seize them.

After the challenges of five, six in the tarot represent its welcome opposite. Now that you've been through a period of breakage and pain, it's time to fix things, heal and put them back together through a period of peace and togetherness. Six means harmony and balance in all aspects of living, meaning you'll be feeling more content and less stressed. This is a time to work with others and see what you can do with that sense of understanding.

Lucky number seven is the number of reflection and learning in the tarot, coming after six's period of healing. When this number shows up in a reading, it's time to look back on what you've learned recently, gather up the wisdom you've gained and use the knowledge to make the most educated decisions possible, balancing logic and intuition to do the right thing.

There's a good reason the number eight looks like an infinity symbol turned on its side. In tarot, this neverending loop represents a ceaseless quest for growth and achievement. When this number appears in the tarot, it's telling you not to rest on your laurels, and that continuing forward is the only way to get everything you want out of life. In order to become the very best, you can't ever stay still.

Nines are a special number in tarot representing that you've gotten where you want to go. When a nine card appears, it's reminding you to take a look back at all you've done to get this far, as well as to recognize what you have now. You'll start to see the fruits of your efforts, and feel satisfied with everything you've accomplished thus far.

10s in tarot are cyclical, showing that where one event ends, another begins. Everything you've put your heart and soul into has given you what it can, and it can be time to move on. This can be scary, but almost always, this comes with forward momentum. The next time around, you'll be able to do even more and be more fulfilled in the process. It's also a sign that you're not stuck, and that the future holds wonders for you.

In medieval times, a page was a young noble who serves as an apprentice to knights, and in the tarot, they represent youthful naivety and curiosity. When pages appear in the tarot, you should follow your creativity and keep an open mind in regard to new possibilities. Trust a little, and you'll be rewarded. 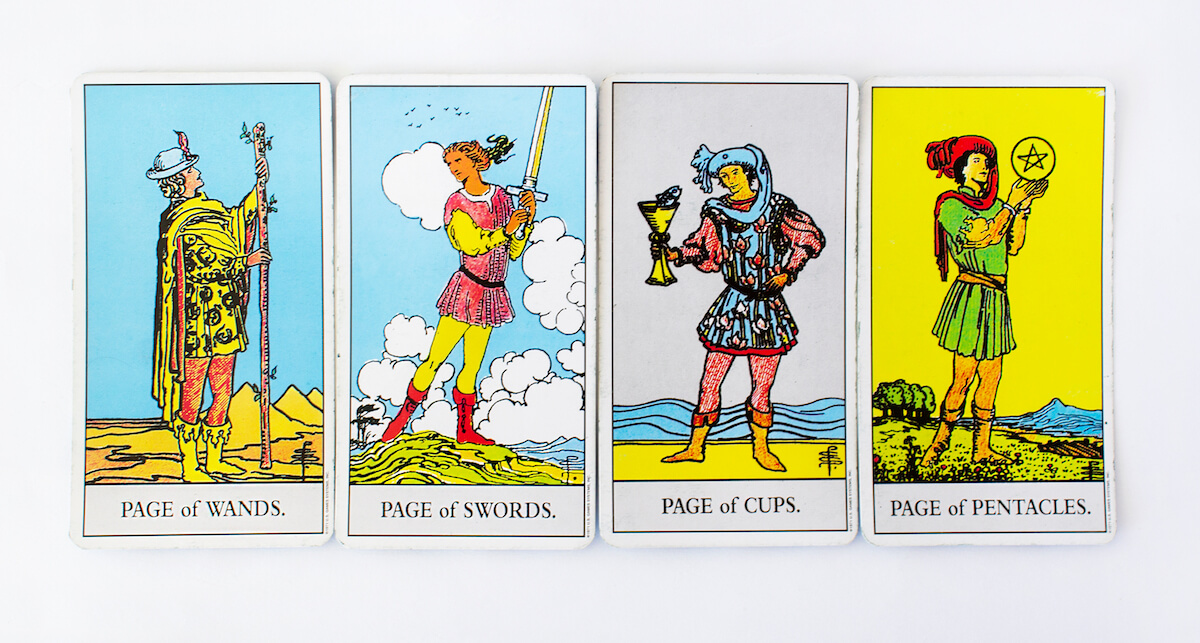 Knights are known for their ambition and determination on their quests for success, and that's precisely what this card represents. When it appears, it usually means that you have an immediate goal that needs to be acted upon, and this card will bring you the drive, passion and focus to do so.

Regal queens are masters of their domains, with confidence as well as self-awareness. If you draw a queen card, this is usually a reminder to look inward and understand yourself. Have you been neglecting your needs lately? If so, it's time to indulge, to work on bettering yourself and to pay attention to what will make you thrive.

Last, but certainly not least, kings are the rulers at the very top and as the old adage goes, great power comes with great responsibility. When this card is drawn, the tarot is asking you to be mature, not to abuse the power you might have and to rise to the occasion. Something big is being asked of you, and you can either shy away from it or embrace the call and become the strongest version of yourself that you can possibly be. 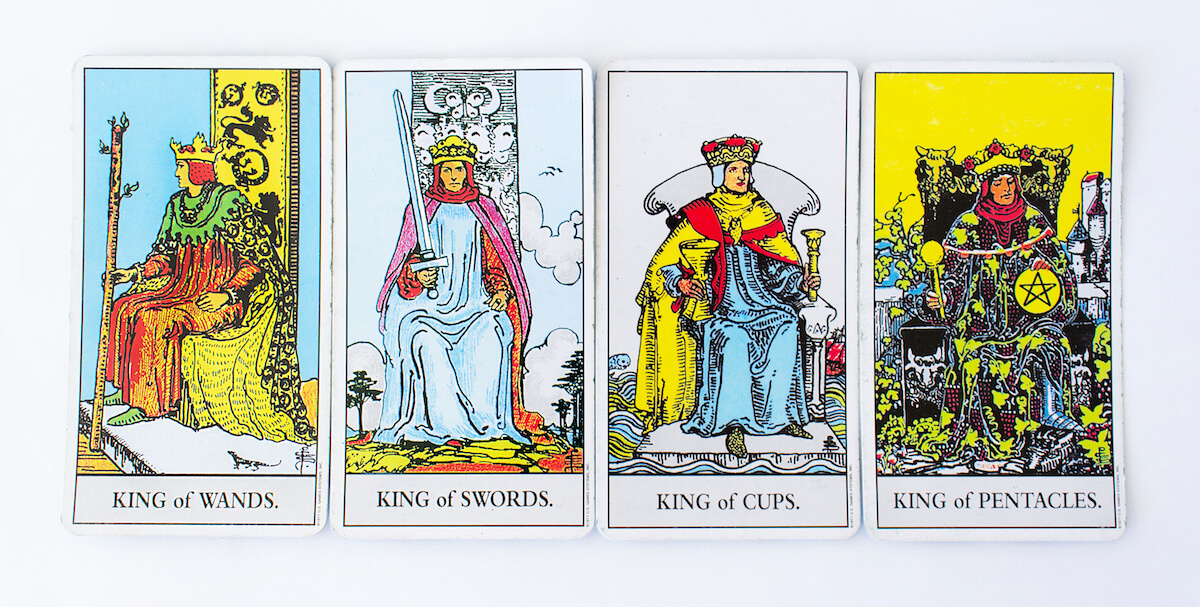