Whenever I hear there's a new "healthy" ice cream on the market, I approach it with both excitement and a healthy dose of skepticism.

While some of the low-fat and sugar-free options are downright delicious, others are not so nice to eat. When the team behind Re:THINK Ice Cream "for a healthy lifestyle" reached out and asked if I'd be interested in taste-testing some of their flavors, I was intrigued. Of course, I had to dig in myself to find out how Re:THINK really ranks.

Re:THINK Ice Cream is made for ice cream lovers who are also conscious about what they eat. It cuts out some of the worst stuff in ice cream while adding in healthy ingredients for added benefits, without losing any of the great taste and creamy texture of the ice cream you're used to.

Compared to typical ice creams, it has half the calories, half the fat, and two-thirds fewer sugar and carbs. It's also free of sugar alcohol and artificial sugars while being keto-friendly and gluten-free. Plus, it has twice the protein of regular ice cream, as well as prebiotic fiber for digestion and green tea extract for a dose of antioxidants.

Re:THINK currently offers a dozen flavors. In addition to the six they sent me to try, they also have Almond Asteroid, Cardamom Pistachio, Coconut Matcha, Coffee Hazelnut, Meyer Lemon Poppyseed and Turmeric Ginger flavors. They're available to purchase online for $6.99 per 14 oz. container, and you can also click HERE to find out if Re:THINK is available in stores near you.

I decided to start my Re:THINK journey with the tried and true classic,  Vanilla Supreme, flavored with Madagascar vanilla. When I first opened the container, the ice cream was a little bit hard and icy, but after letting it thaw for a few minutes, as recommended on the side of the container, it became creamy and totally scoopable. The texture was only slightly firmer than typical ice cream.

I was also pretty happy with the flavor. It starts with a light and delicious vanilla, though I did find that it sometimes had a bit of a weird, artificial flavor aftertaste. However, since I mostly use vanilla ice cream as part of other desserts, I didn't taste it most of the time. It was the perfect addition for à la mode-ing chocolate cake, and the container basically got demolished as soon as I topped the ice cream with sliced strawberries and honey. If you're a purist when it comes to vanilla ice cream, this may not be exactly the right flavor for you, but if you usually use it to enhance other foods, you'll love this. 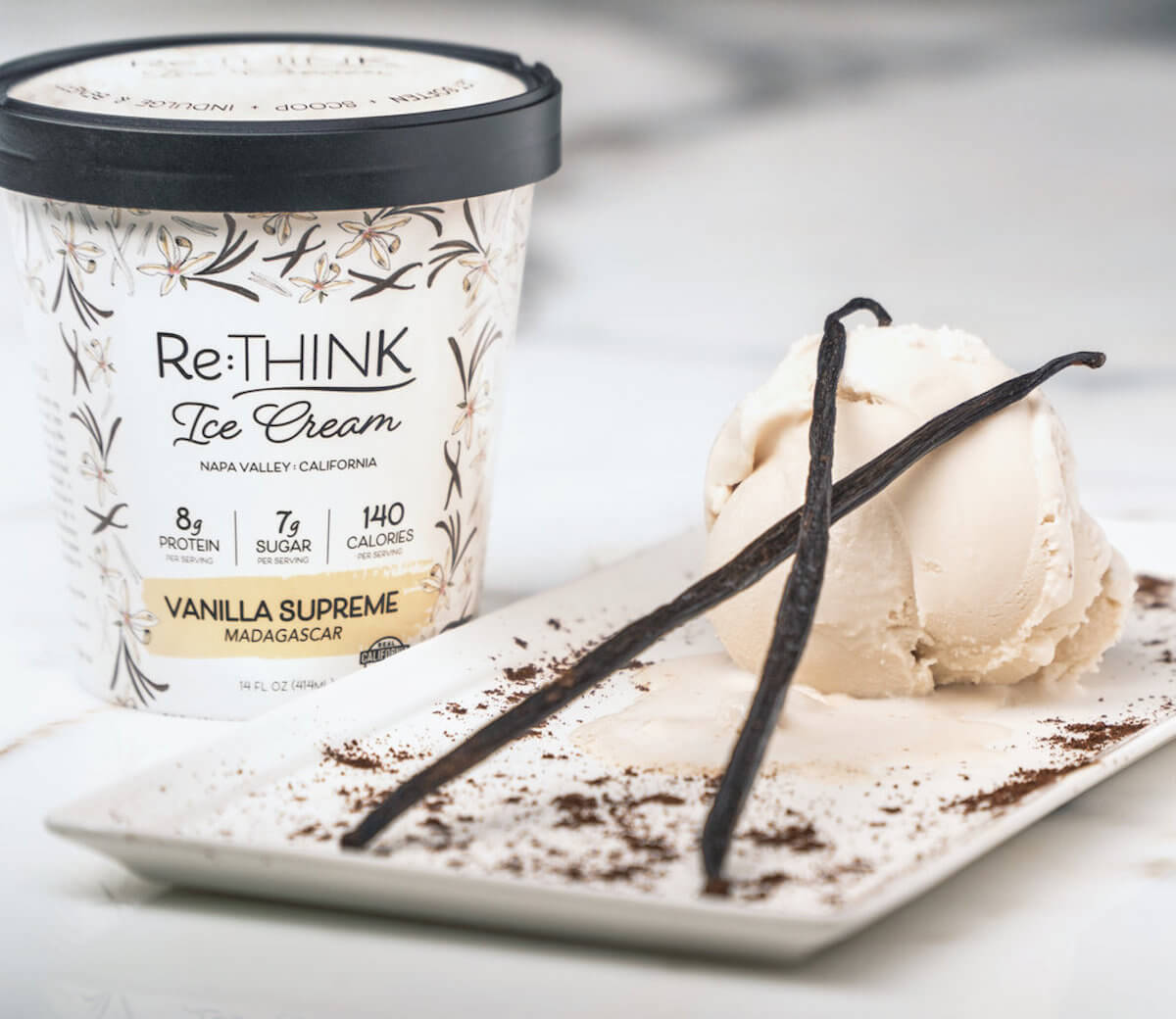 I'm not really a fan of traditional chocolate ice cream by itself, finding it too rich and sickly sweet, so I'm always curious to see how the chocolate flavors from unorthodox ice cream brands stack up. Seeing as I loved Re:THINK's Chocolate Majesty, I'm not sure what that says about how well it replicates the flavor of regular chocolate ice cream. It's creamy with a flavor that reminds me of brownies, and it's full of thin, chocolatey chunks for even more cocoa flavor. I think it's delicious, but chocolate-lovers may need to test it out themselves to find out whether it's right for them. 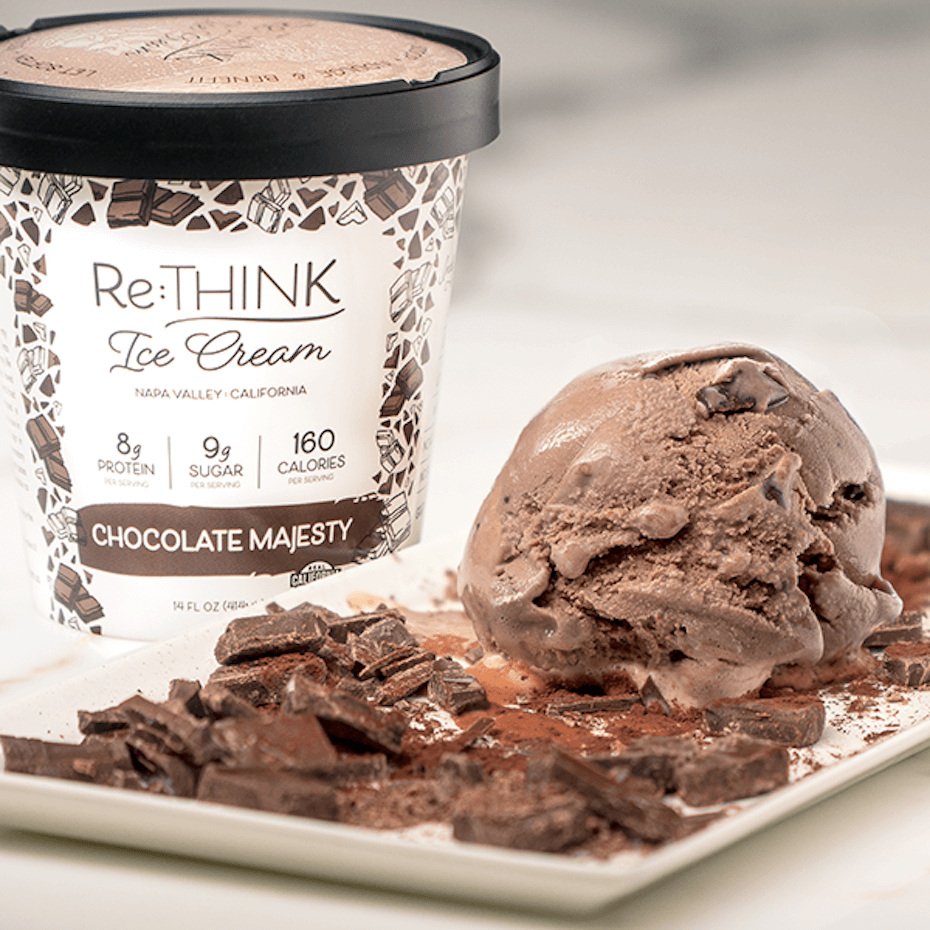 If you didn't tell me that this Black Cherry Vanilla ice cream wasn't low on sugar and fats, I'd have no idea that it wasn't traditional ice cream. In terms of texture and taste, this was closest to the real deal of the six Re:THINK flavors I tried. The flavor was smooth and sweet, with great fruit and vanilla flavors and little chunks of cherry sprinkled throughout. 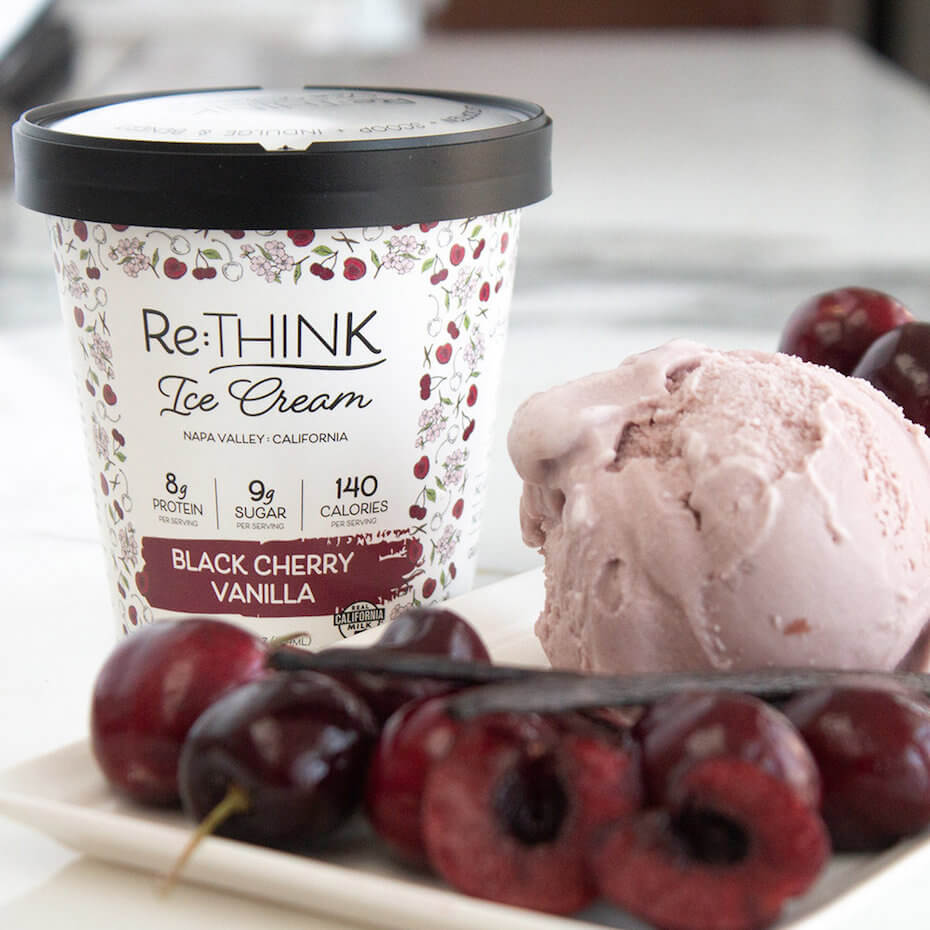 I've never met a mint chip ice cream I didn't like, and Re:THINK is no exception. The ice cream is rich and very minty, and the chocolate chunks are exactly the sweet complement that every minty ice cream needs. It's done so right that there simply isn't much to say about it. 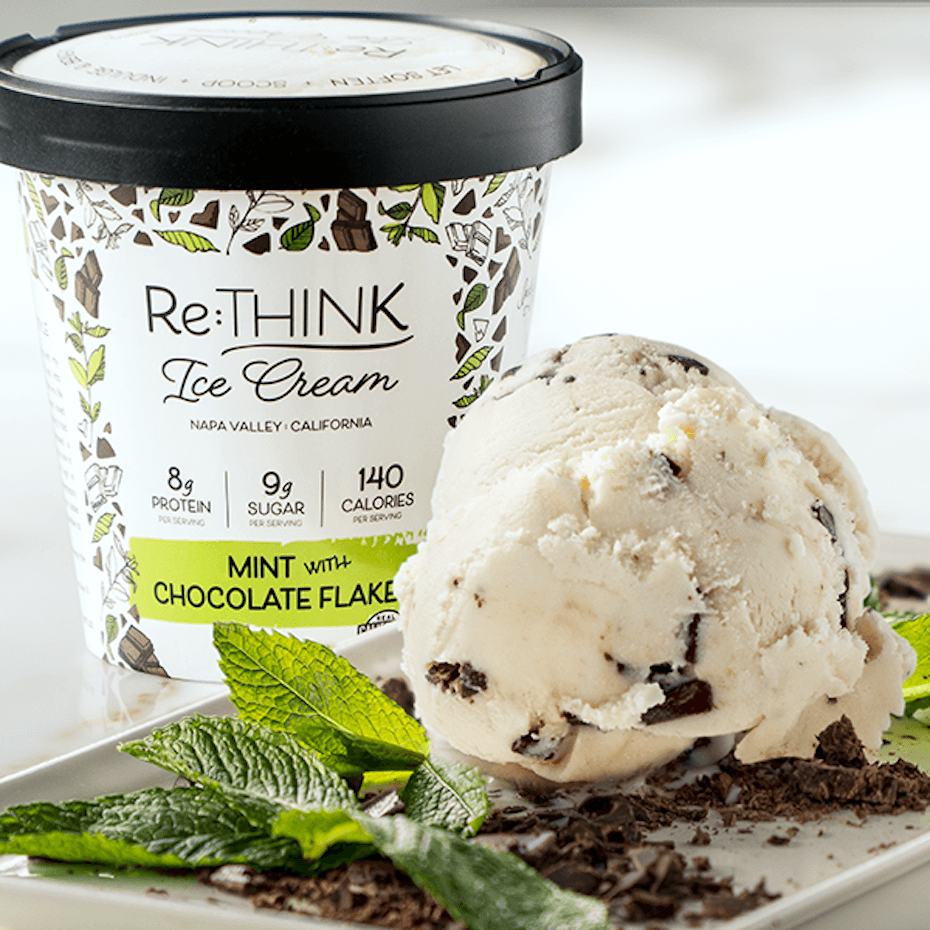 I wasn't exactly sure what to expect from a Strawberry Chia Seed ice cream, but I have to say I'm impressed with the flavor. This ice cream is sour, tasting more like fresh strawberries than the creamy, vanilla-tinged strawberry ice creams I'm used to. The chia seed texture also gives it a bit of light crunch throughout. The result is something that tastes like a wonderfully tart fruit smoothie. If you've been looking for something special to throw in the blender with your favorite fruit, I'd definitely recommend trying this. 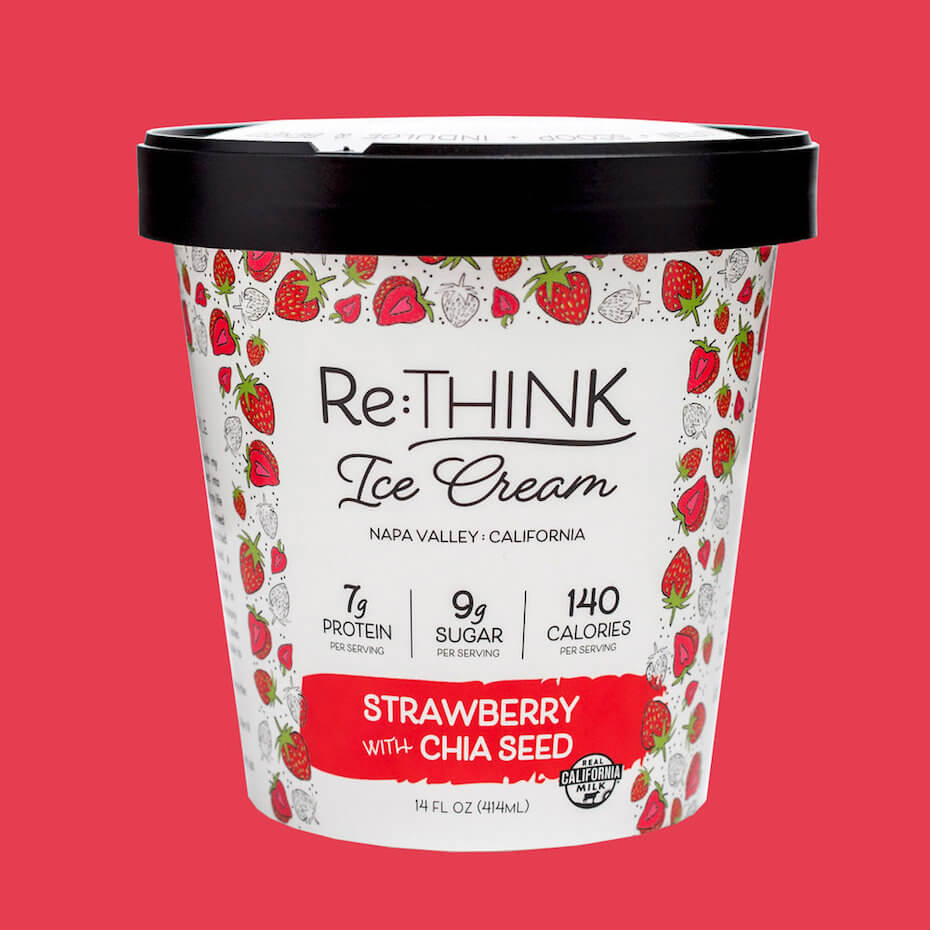 Chocolate Orange With Almond Butter is the newest flavor in the Re:THINK lineup (actually releasing on the day of this publishing!) and it might be my favorite of the bunch. Chocolate and orange have recently become a preferred flavor combination of mine, but I don't encounter it often, and I when I took my first bite of this ice cream, I was delighted to discover it was everything I wanted it to be. It was chocolatey but not too sweet, with big slivers of rich chocolate and a pleasant citrusy aftertaste in every bite. Thanks to the addition of almond butter, it also has an awesome nutty texture, and I think a restocking will be in order very soon. 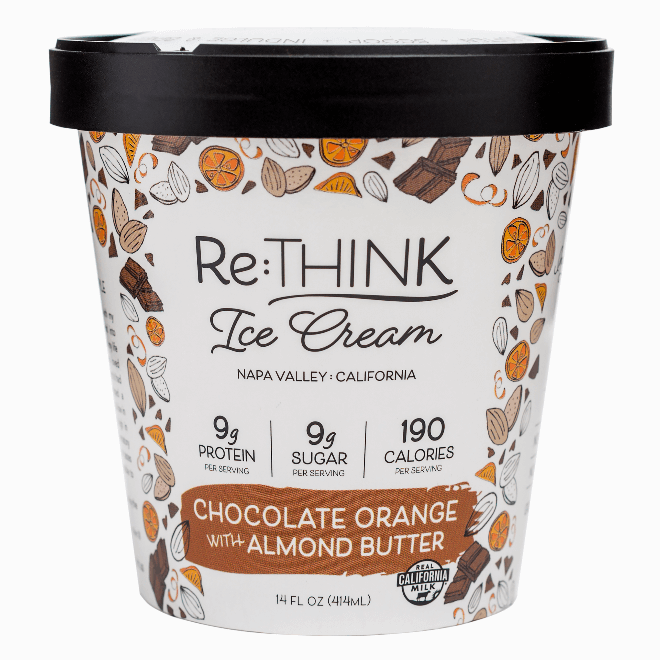 Not every single flavor in the Re:THINK lineup tastes exactly like the traditional ice cream equivalent you might be used to, but that's not necessarily a bad thing. With less calories, fat and sugar, it manages to be super satisfying without sacrificing too much flavor and texture, and it also has some unusual flavors you won't find anywhere else. At $7 per container, it might be pricier than your typical grocery store brands, but if you're on the lookout for something special, it's well worth the splurge.