Retro-Bit's GoRetro! Portable Is Worth It for Its Oddities (and Tetris)

When a game is a true classic, it holds up regardless of its age.

I've always been a fan of retro games, and a firm believer that just because a game is older than you doesn't mean it's not worth playing. I obsessed over the NES Classic Edition and  all of its old-school magic, so when I was asked to review the 260-in-one Retro-Bit GoRetro Portable, I was more than happy to check it out.

The Retro-Bit GoRetro! Portable is a handheld gaming device modeled after Nintendo's iconic Game Boy design. It comes packed with 261 games from the classic Nintendo Entertainment System and Game Boy libraries, all loaded into one easily accessible device.

This includes 36 "featured games," consisting of more premium titles, and 225 "extra games." One of the main selling points of the GoRetro is its inclusion of licensed Capcom titles including Ghosts 'n' Goblins, Mega Man 2 and Mega Man 3, but other big games such as Tetris and BurgerTime are also welcome inclusions.

The GoRetro is powered by four AAA batteries or can be played while plugged into a power source via micro-USB, and has a fully colored backlit 2.8-inch screen. It's about 5.5 inches tall and 3 inches wide, and is available in blue or red and white for $34.99 at Best Buy and GameStop. 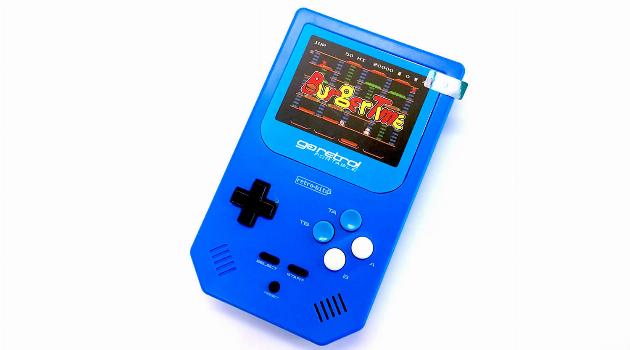 I have to admit I was a little confused at first about the way batteries worked for the GoRetro! Portable. I was excited to get my hands on the device and check out its games, but since I didn't have any batteries on hand, I opted to plug it in, instead. The GoRetro doesn't come with the micro-USB cable needed to do so, but if you're anything like me and own lots of techie toys, you're prone to have one (or 12) lying around.

After playing with it for about half an hour or so, I unplugged it and was surprised to see that it lost power immediately. It took me a moment to realize that there was no internal power source to charge up, and if I wanted to take it on the go with me, I would need to go the AAA battery route. While I found this a little disappointing, it made sense—and the fact that it was battery-powered definitely gave the system more of a retro feel.

Things got a lot better from there. I'm currently obsessed with Tetris 99 on the Nintendo Switch, so I was immediately drawn to the Tetris game included on the GoRetro. You really can't go wrong with Tetris, and the game felt as classic and playable as ever. The plastic D-pad gave me good, if not perfect, control, and even though old school Tetris lacks a lot of the features that I'm used to, I played it a lot. The game looked crisp, and I still found its theme song irresistible. Though the 2.8-inch screen looks kind of puny compared to a phone screen, or even a 3DS screen, it's much bigger than the original GameBoy screen ever was, and with backlighting and color, there's a lot more to it.  Plus, when I was ready to move on, a Reset button at the bottom of the device took me right back to the game selection screen.

Next, I wanted to give a platformer a try. I opted for Ghosts 'n' Goblins, a notoriously difficult run and gun game I've always been pretty horrible at. Here, I got to make use of the GoRetro's turbo buttons, which accomplish the same thing as pressing the regular button many times in quick succession. In that game, a knight has to progress through a level while being barraged by an onslaught of zombies, evil crows and demons, and as a player, your best bet is to throw as many weapons as possible. That turbo button wound up being a lifesaver, and I actually managed to get through the first world for the first time ever with its help. The game just felt good to play, even if I wasn't playing that well.

The Mega Man games felt great, too, but not all of the featured games worked equally well. I think BurgerTime requires extra precision that the controller doesn't necessarily allow, but that doesn't mean I didn't try my hardest to play it.

As much as I've tried, I'm not even close to combing through every one of the system's 225 extra games. I'd be lying if I said the games weren't of varying quality, with some of the titles barely qualifying as games, but I stumbled upon a few that I thought were worth my time. For example, I was immediately drawn to its sudoku game, and even though I had to use trial and error to figure out the controls and they made a few bizarre color choices when they designed it, making it nearly impossible to see at some points, I probably played it for at least an hour. 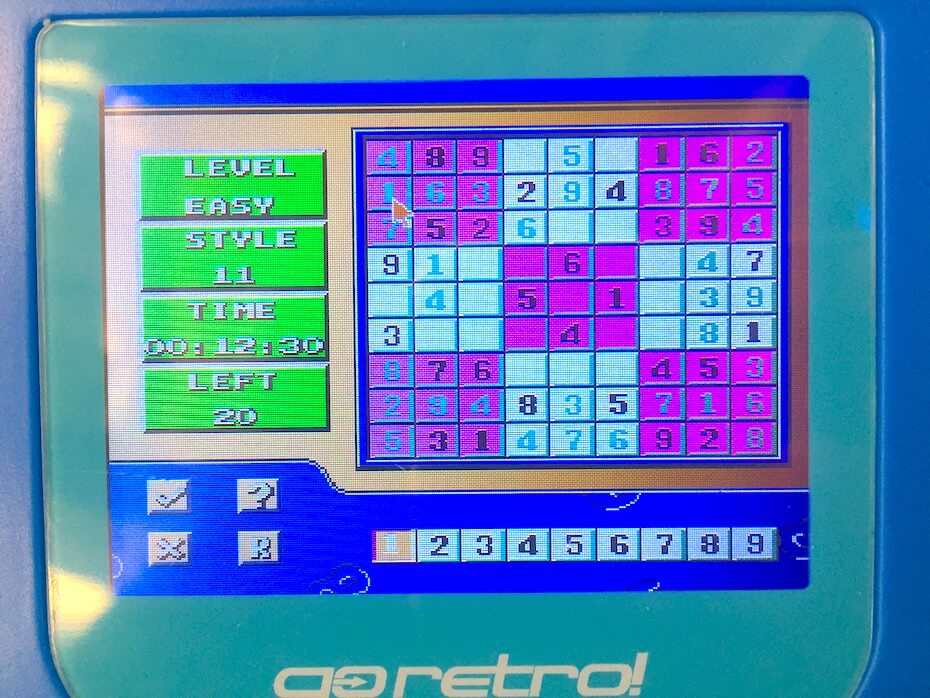 It also has solitaire, which I always find compelling for some reason. I can't tell you why the game makes players slowly drag cards across the screen to their destination, rather than snapping to the next card with the movement of the D-pad, or why big portions of the movements don't register properly. There are a million reasons why I should play solitaire elsewhere instead, but I played numerous games of it anyhow.

And then there's a game called Pet Dog, which appears to be a Tamagotchi-like pet simulator. It comes with no instructions and an extremely cryptic set of symbols to take care of the dog in the game, and even though I can't figure it out for the life of me, I spent way too much time trying out different controls and trying to predict the outcomes. I've gotten a lot of enjoyment out of the system behind the real "games" it contains, and I plan to continue discovering even more of its mysteries. 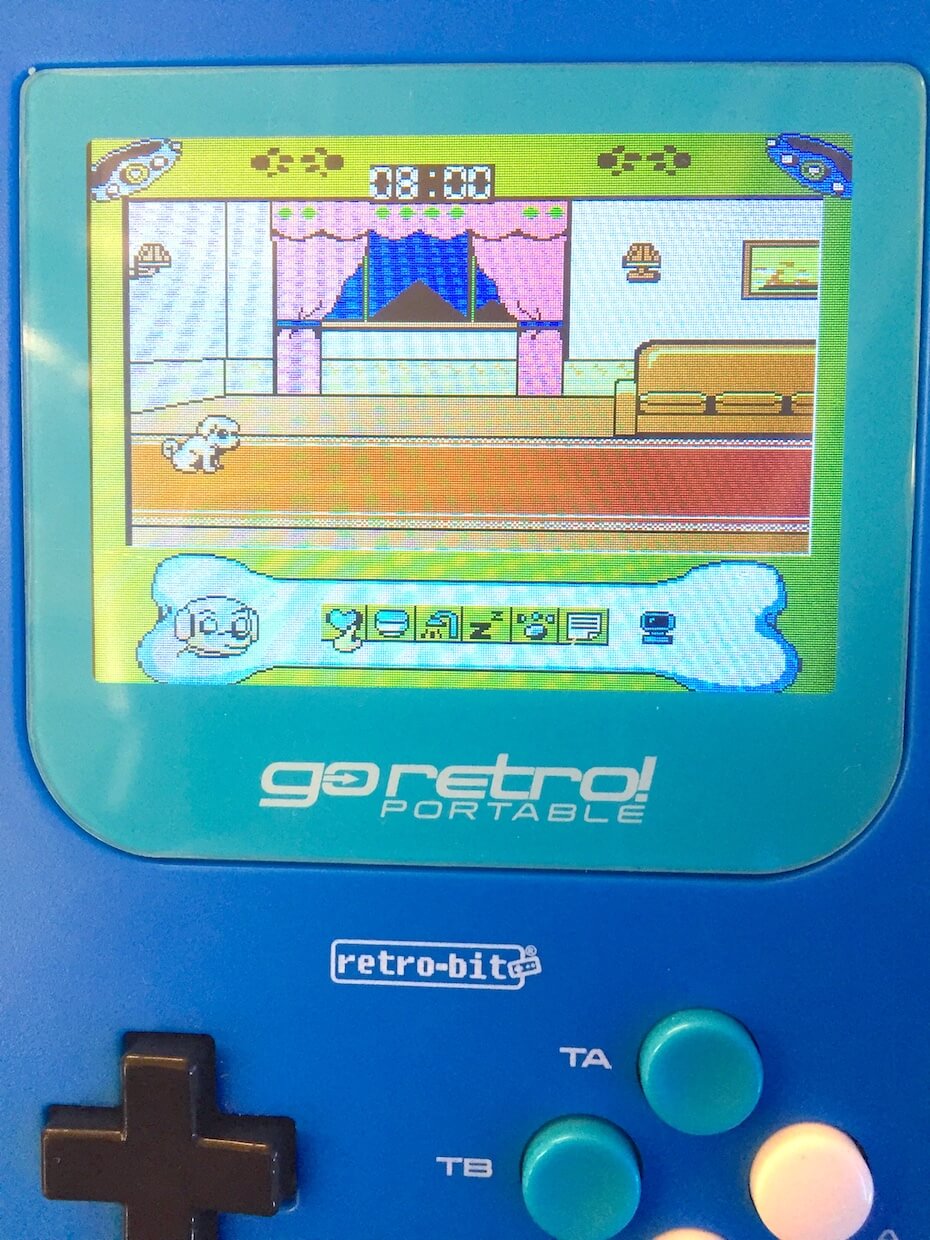 The GoRetro! Portable isn't a definitive all-in-one console featuring every Game Boy game you've ever wanted to play, but that doesn't mean it's not worthwhile. If you love classic Capcom games, there's a lot to enjoy here, and it's always fun to discover popular retro games for the very first time.

But beyond that, I think a lot of the fun of the console is poring through the extras to find weird little gems. While most of them aren't ever going to be worth seriously playing, others might provide as much enjoyment as the featured games—or at least a laugh, and the feeling of uncovering something strange and unique. At about $35, it won't be for everyone—especially if you already own the classics you adore on other consoles—and the fact that it uses up batteries can add up to additional expenses and inconvenience. Still, I'm happy that it's part of my collection.

Curious about classic games? Click HERE for our ranking of every game on the SNES Classic Edition.