Since as long I can remember, I've claimed that Beauty and the Beast is one of my favorite Disney movies.

But I'm going to let you in on a little secret—up until a few days ago, I hadn't seen the film in fifteen years. Wowzers. 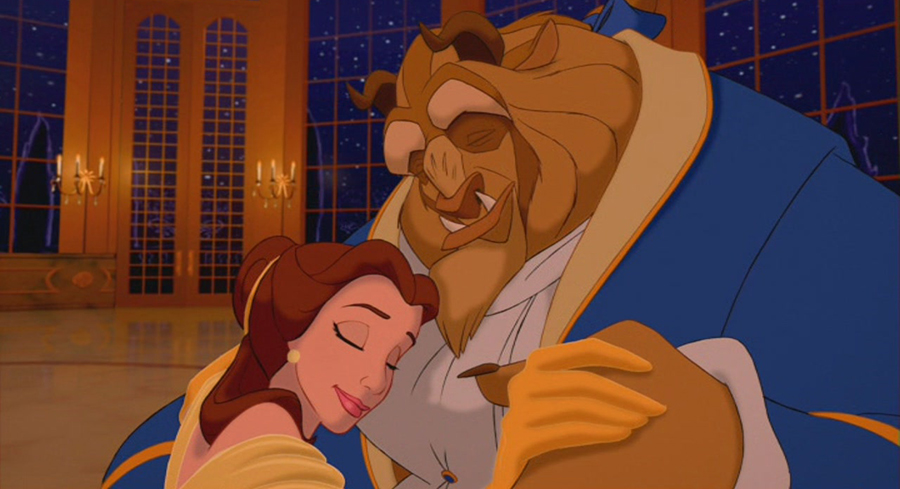 Truth be told, it had been so long since I'd seen the film that I couldn't truly remember key plot points in the story. Embarrassing and not okay.

So how did I resolve this dilemma? I rewatched the film, paying attention to its every detail.

Scroll below and see how watching the film years later helped me rediscover why I've always loved this movie and discover 19 new things I'd never noticed before.

1. One of Belle's Fave Books Is My Fave Book

Even though it's been a long while since I've seen the movie, I did remember that Belle had a passion for books (a girl after my own heart). What I hadn't noticed before, however, is that we share a love for one book in particular. Say what?! At the beginning of the film, as Belle is headed to the library, she says she just finished the most fantastic story about a beanstalk and an ogre. She's referring to Jack and the Giant Beanstalk—one of my favorite books. I always knew Belle was my soul sister. ????

2. Belle Has One Little Pesky Hair She's Constantly Messing With

This is by no means an important detail of the movie, but I couldn't help but notice that Belle is constantly fussing with a baby hair that swoops down on her face. Belle, I feel you, girl. The same thing happens to me. I swear, rewatching this movie just proves Belle and I would be bffs in real life. 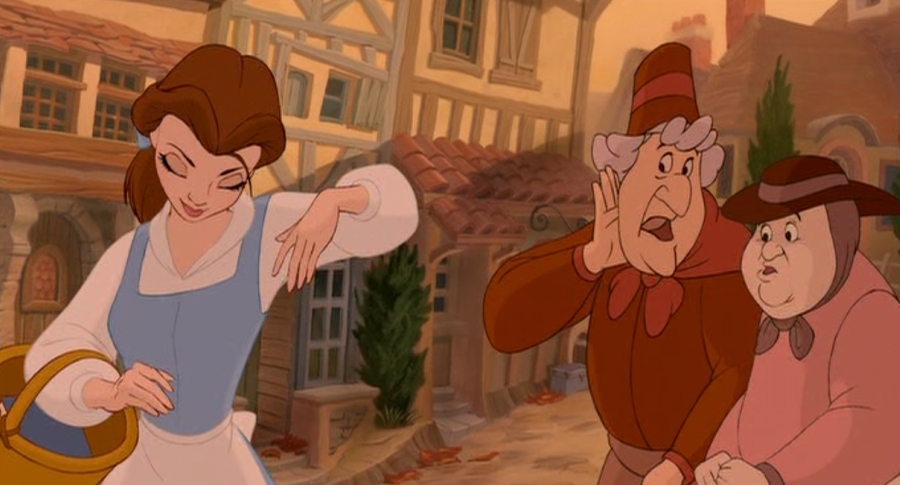 3. Belle Says One of Her Fave Books Has a Prince in Disguise

Back to the topic of books. At the beginning of the film when Belle is at the library, she selects a book the bookseller claims she has already read twice. She then explains why it's her favorite: "Far off places, daring swordfights, magic spells, a prince in disguise."

It has a lot of elements of her own fairytale story… coincidence? I think not.

I remembered that Gaston was a conceited jerk, but I honestly didn't remember that he was really, really hairy. Gross! 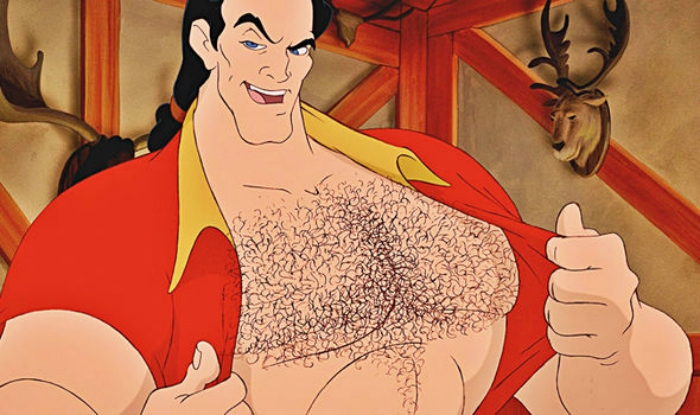 5. Belle's Dad Doesn't Seem to Disapprove of Gaston at First

At the beginning of the movie Belle's dad Maurice asks why she's not interested in the handsome Gaston. I'm sorry, but what? How could I not remember this detail? Her dad should have known that Gaston was a rotten egg from the start.

When Belle's father is on his way to his invention convention with their horse, Phillipe, they run into a fork in the road and are forced to pick between a shortcut and a scenic route. Phillipe urges Maurice to take the long way, but Maurice chooses the shortcut. If only he would've listened to the horse! He would have never been a prisoner of Beast. 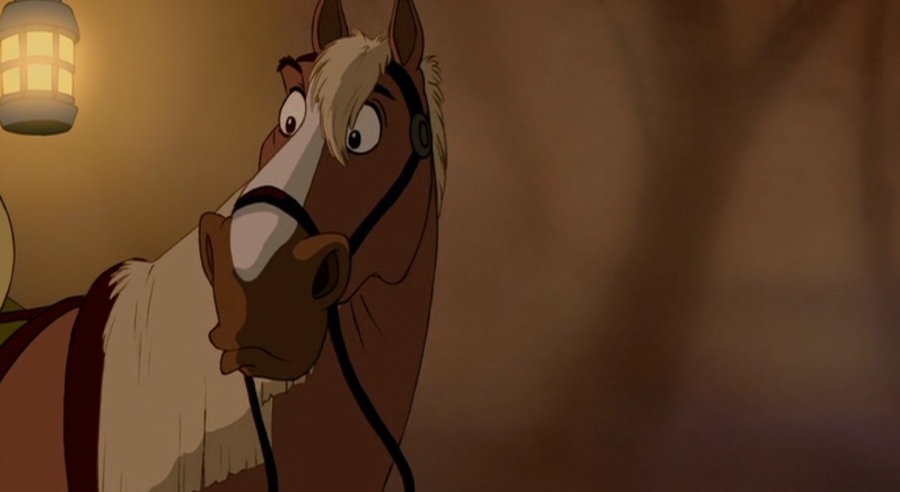 7. Cogsworth Could Have Prevented Belle's Dad From Being Locked Up

Cogsworth is definitely the "dad" of the film. Although he urges Lumière and Mrs. Potts to send Maurice on his way when he stumbles into the castle, he doesn't protest hard enough. Belle's dad could have been saved from prison if Cogsworth would have put up more of a fight. Oh, well.

8. The Beast Isn't as Bad Has He Seems

When Belle decides she will take the place of her father in prison, the Beast is surprisingly genial and offers her a bedroom of her own. How had I forgotten that, and how did he get such a bad rap!? He offered her a beautiful bedroom in a castle? How could she complain? ????

Right before the gang breaks into "Be Our Guest," Mrs. Potts puts her son Chip to bed. At this point, we see that Chip has tons of brothers and sisters. I'm sorry, what?! Why aren't they ever mentioned? It's clear Mrs. Potts has a favorite child…. 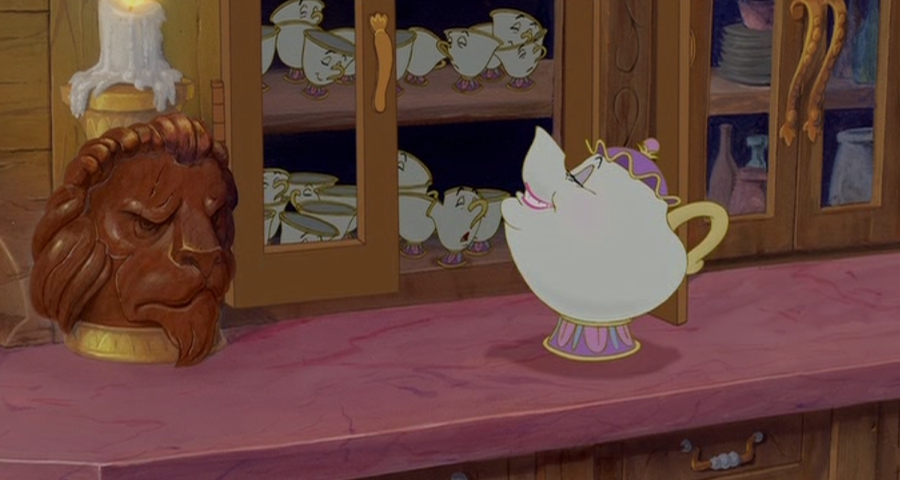 During the "Be Our Guest" number I realized that the character Lumière is a total star. How had I never noticed this before? Of course, I remembered that he was an important part of the story, but I had completely forgotten how charismatic this guy is. He should have his own film, tbh.

In addition to realizing Lumière's true talent, I recognized that he was the only character with an accent—mind you, this film takes place in France. Very confusing. ????

11. Belle Has No Manners

I don't know how this slipped past me 15 years ago, but Belle has no manners whatsoever. During "Be Our Guest," she tries virtually every food with her finger! C'mon, Belle. You're more polite than that.

12. Belle Changes Her Mind About Beast Way too Fast

After Beast saves Belle from the wolf attack, she falls for him in about 2.5 seconds. No one falls in love that fast, just saying. 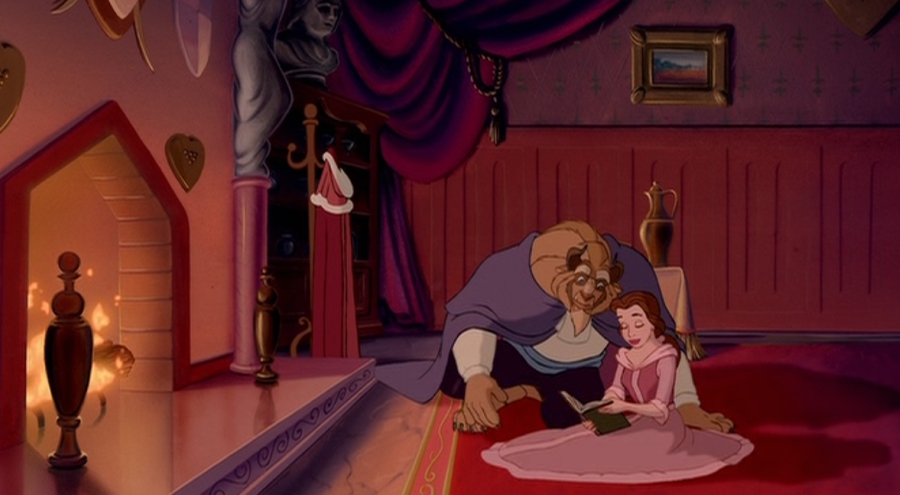 Halfway through the film, I realized that Belle wears four dresses total. I don't know why, but I've always thought she only had two—the blue and white dress and her yellow gown. Wrong! She also wears a pink gown and a green gown. Mind. Blown.

14. Her Wispy Hair Really Bothers Her

After I noticed the wispy hair the first time, I couldn't help but notice it every other time it bothered her. Three times to be exact. 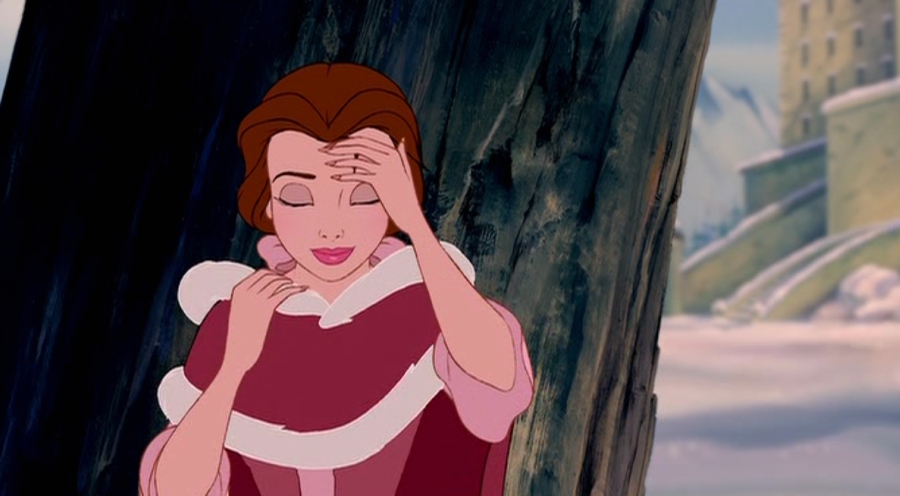 15. The Wardrobe Is My Favorite

Watching the film 15 years later made me realize the Wardrobe is seriously underrated. How could I not remember a character who did a cannonball into a giant fountain? She earned major cool points in my book after this viewing. 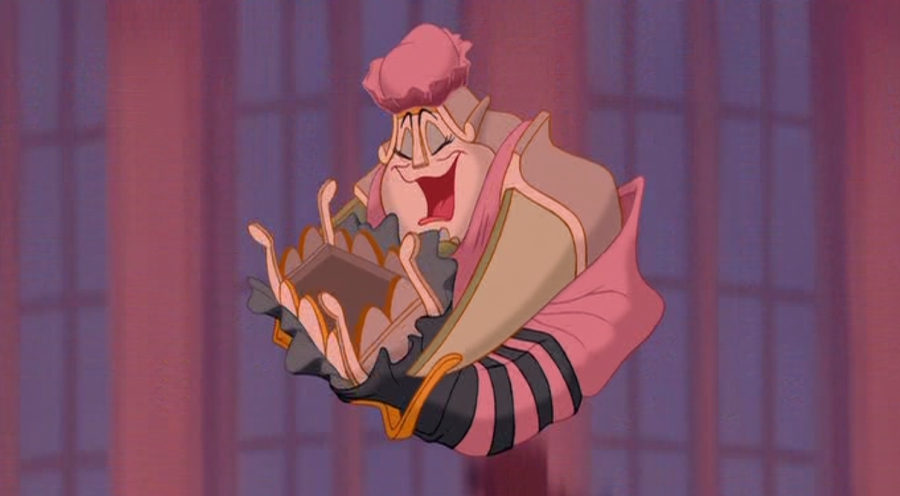 16. Beast's Reaction to Dancing with Belle Is Totally Awkward

I never realized how incredibly uncomfortable Beast is dancing with Belle for the first time. He's awkward but adorable, like me at a middle school dance. I definitely will never forget this detail now. 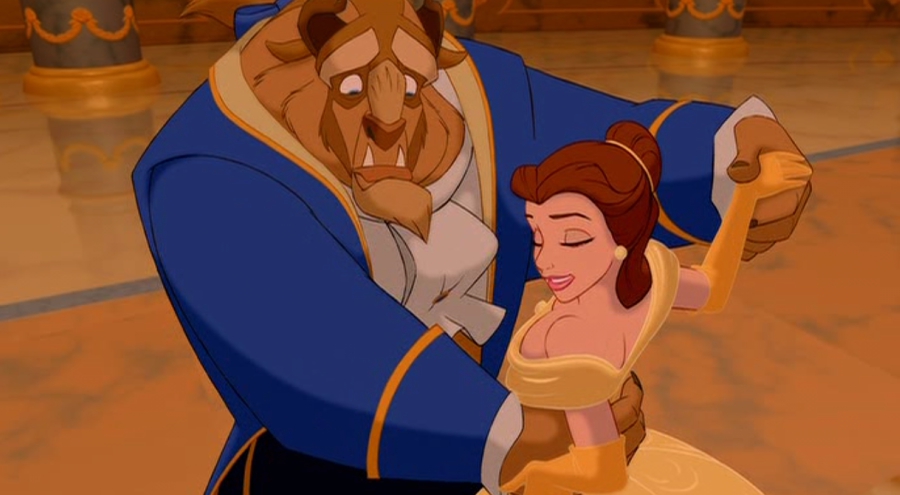 Maybe I overlooked the Feather Duster the first few times I saw the film as a kid, because I never realized how swoon-worthy her and Lumière are as a couple before. I mean, c'mon, look at that love. 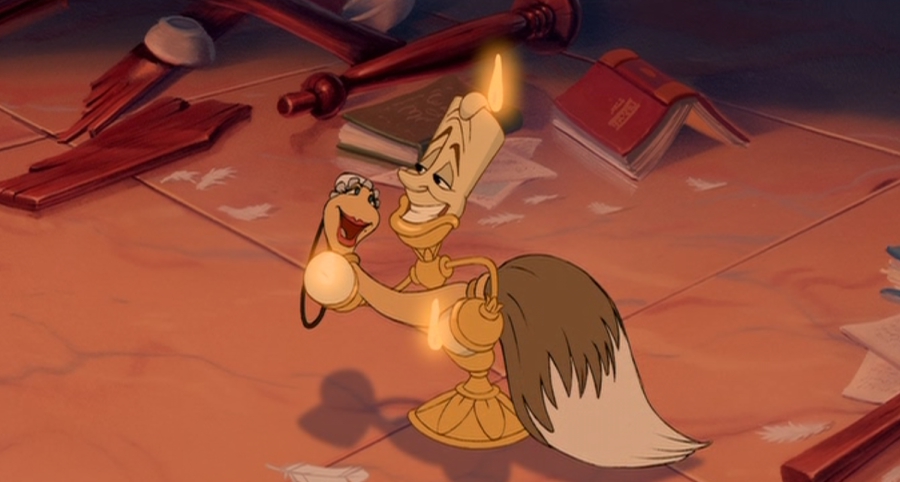 18. Belle Holds Up Beast When He's About To Plummet to His Death

I definitely never noticed that Belle has Hulk-like strength before I rewatched this film. When Beast gets stabbed by Gaston, he nearly falls off the balcony, but Belle grabs his cloak and pulls him up. She definitely must have a good workout routine. 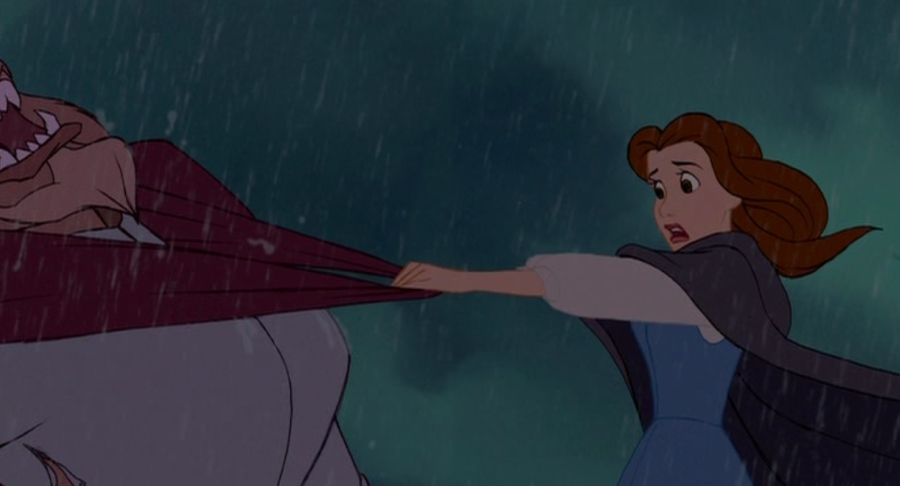 19. Timing of Her "I Love You" Was Impeccable

It's embarrassing to admit this, but I had completely forgotten how Belle saved Beast. It wasn't until this recent viewing that I discovered Belle's utterance of "I love you," is what saved him and transformed him into his former prince self. All I have to say about this is, dang, Belle, you have impeccable timing!
We seriously cannot wait for the live-action film to come out tomorrow! So excited, in fact, that we went and visited Disneyland to see its Beauty and the Beast makeover. Read all about our experience HERE.
beauty and the beastbelleexperience