The Right Cup is designed to hydrate you better by convincing you you're drinking flavored water when it's really plain old H2O.

But can it really do what it promises? I tested out the orange-"flavored" Right Cup to see if it delivers. 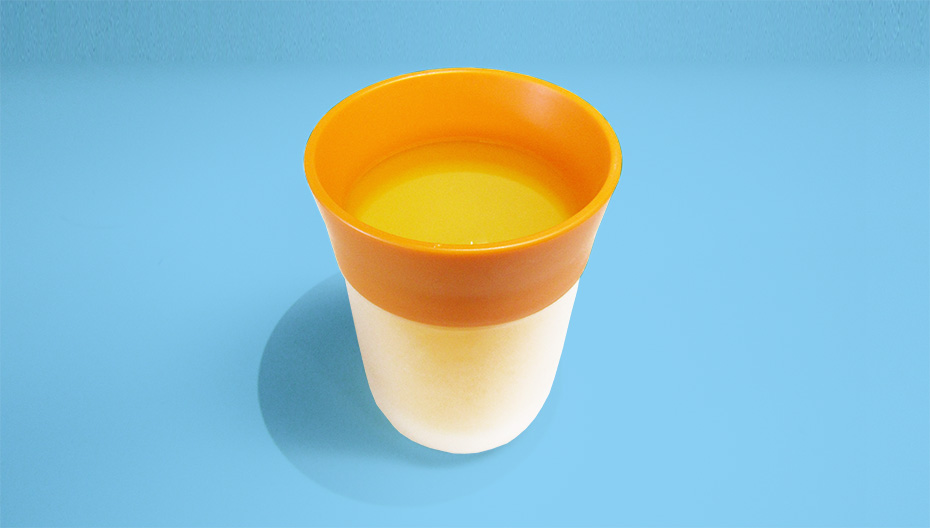 A little background: The Right Cup started on the crowd-funding website Indiegogo, where backers raised more than $1.2 million to make the cup a reality.

With the help of an aroma that's added directly into the material of the cup, the goal is that your brain will combine a scent with the experience of drinking water and make you think you're gulping down a flavored beverage. After all—according to The Right Cup's Indiegogo page—80% of what we taste actually comes from our sense of smell.

In my experience, The Right Cup does what it sets out to do. At first, the cup gave off a strong orangey, if not slightly chemically, smell. When I filled up the cup and took a sip, there was a powerful orange sensation—though I wouldn't say I immediately "tasted" it.

With continued use, however, I did begin to really taste the orange—faintly at first, and then more strongly as time passed. Apparently this is supposed to happen. As your mind associates drinking out of The Right Cup with the taste of the drink, the flavor is said to grow stronger.

And having an endless supply of slightly orange water at my desk really did make me drink more of it. Before I even realized it, my cup would be empty and I wound up refilling it about twice as often as I had even the week before. Drinking more water also made me more full, leading to less unnecessary snacking.

The orange Right Cup is also likely their least exciting flavor. They also come in mixed berry, apple, peach and cola, with even more flavors on the way, and I'm very curious to try one. They start at $29, plus shipping, if you want to purchase your own.

I even tried The Right Cup with carbonated water, which is supposed to enhance the flavor even further because of its acidity. Unfortunately, I didn't see the benefits, with the flavor of the carbonation overpowering any orange essence I typically taste with normal water. This might be in part because I generally dislike carbonated water—but I'd still like to try it with the cola flavored Right Cup and see what happens.

The Right Cup probably isn't for everyone. If you find the flavor either too subtle or too overpowering, it'll probably turn you off from drinking it. But if you're like me and you're constantly craving juice or soda, The Right Cup might just help you cut those cravings and get you to drink more water.

Trying to drink more water on the go? Click HERE to see how the collapsable Que Bottle can help you do just that.