As Quinn Forrester on the YouTube Brat series Chicken Girls, the 15-year-old musical.ly star now spends so much time on set, she even goes to school there! We caught up with Riley between takes to learn all about her new life.

Read on to learn more about the rising starlet: 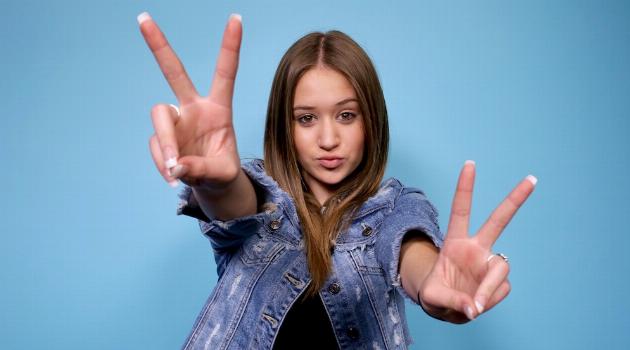 1. She totally relates to her Chicken Girls character Quinn:

"Quinn just tries to fit in and be like everyone else, but by doing so, she gets into drama. But her first priority is her friends and keeping them all together, which is just like me." – Riley Lewis

2. Her favorite part of being on set is the people:

"I love working with my friends, and becoming close to new friends I didn't even know I'd have!" – Riley Lewis

3. She goes to school on set for three hours every day.

"It's kind of distracting, because you have all your friends around and you all just want to talk and hang out. It's hard because even though there are only three hours a day, you still have to get everything done!" – Riley Lewis

5. How do you prepare for a day of filming?

"I try to take my time in the mornings. I read my lines and make sure I know what reactions and emotions I'm going to have when I perform." – Riley Lewis

6. She would love the chance to play a character in a horror movie.

7. She considers herself a night owl, not a morning person!

Always keep good in your heart ????

"There's this new trend where you wear jean shorts over jeans. We don't need that. That needs to not happen." – Riley Lewis

Want more Riley? Click HERE to see what happened when invited her to the studio to customize some awesome school supplies.