I've always been someone who has to be tricked into fitness activities. Back in the day, I played Wii Fit regularly, and today, Pokémon Go is one of the few things that can get me outside to go for a walk.

When exercise is packaged as a game, it makes me 100% more down for it, which is exactly why I'm so excited about the upcoming Ring Fit Adventure for Nintendo Switch. Last week, I was invited to preview it hands-on with some of the folks from Nintendo Treehouse, and I'm convinced it's about to become my next healthy obsession.

Before I could get started on the adventure, I had to get suited up. One Joy-Con was inserted into the Leg Strap, which attached firmly around one leg with velcro, while the other Joy-Con fit into the Ring-Con attachment. Both had to be calibrated to suit me and my movement, so I jogged in place for a little and then squeezed and pulled on the Ring-Con when it asked me so it could get a good sense of my strength. The Ring-Con felt really sturdy, and could easily handle whatever forces I could throw at it, though I'm guessing the resistance was set pretty low based on my current arm strength.

With the knowledge that a lot of people had gone ahead of me on the game that day, I was happy to know the game wouldn't hold me to some impossible standard set by someone else in way better shape. From there, it was time to set off on my first adventure. 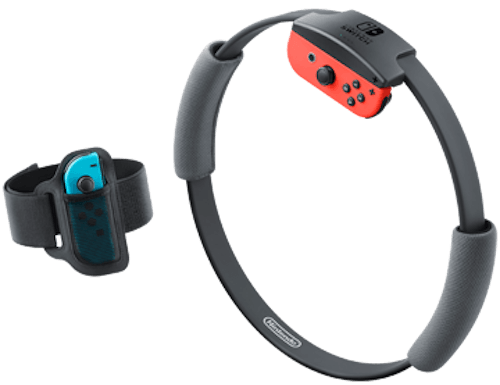 Unlike past fitness offerings from Nintendo, Ring Fit Adventure is highly story-driven, designed to be a game controlled by fitness activities, rather than a fitness program utilizing video game tech. The game has players teaming up with a sentient character based on the Ring-Con, named Ring, to fight the evil body-building dragon, Drageaux. Ring may just be an object, but it's packed with personality and serves as your personal character throughout the game. The dialogue is silly, but oddly motivating, and it fits right in with the tone of the rest of the adventure. 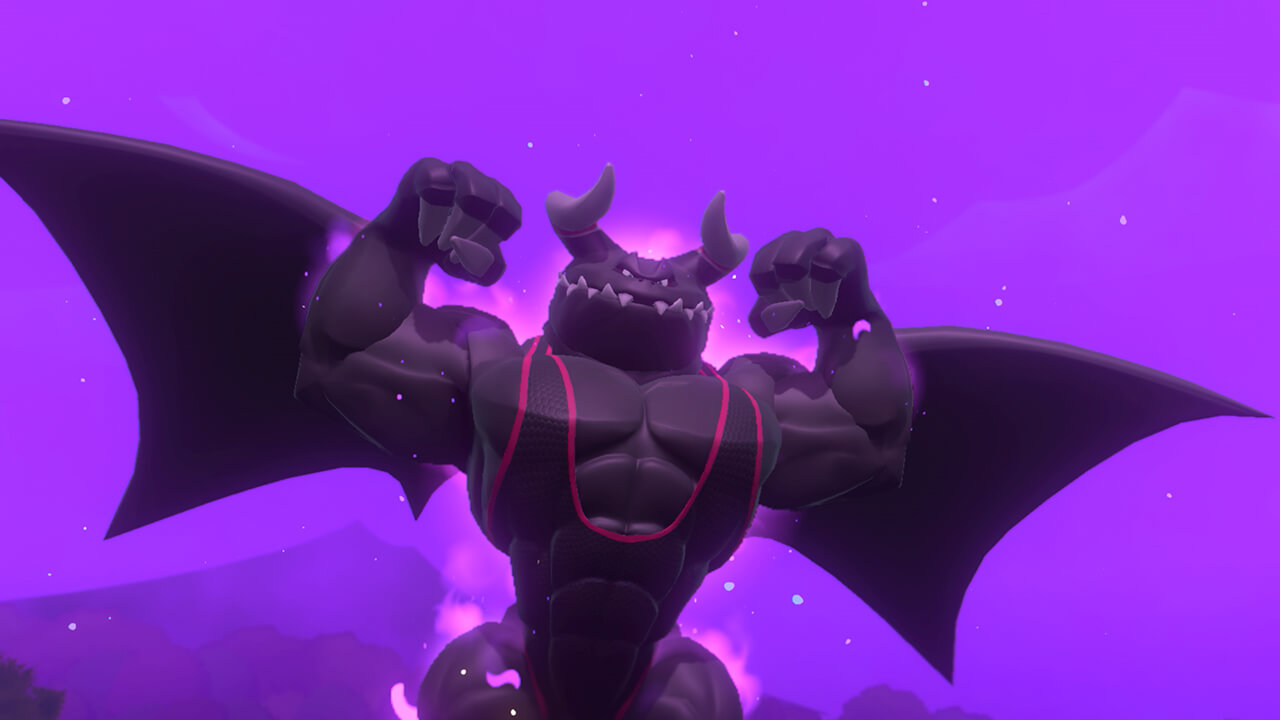 As I set off on the course, I was happy to see how well the game corresponded with my own movements. Unlike some of the other fitness games I'd played in the past, what happened onscreen was basically one-to-one with my real-life motions. With my own actions being accurately and seamlessly reflected, this really helped me feel immersed in the game.

Jogging in place allowed me to move forward on a path through the level at my own pace. The faster I ran, the more quickly my character moved. They also had flaming hair, and maintaining a fast pace caused my hair to flare up wildly. 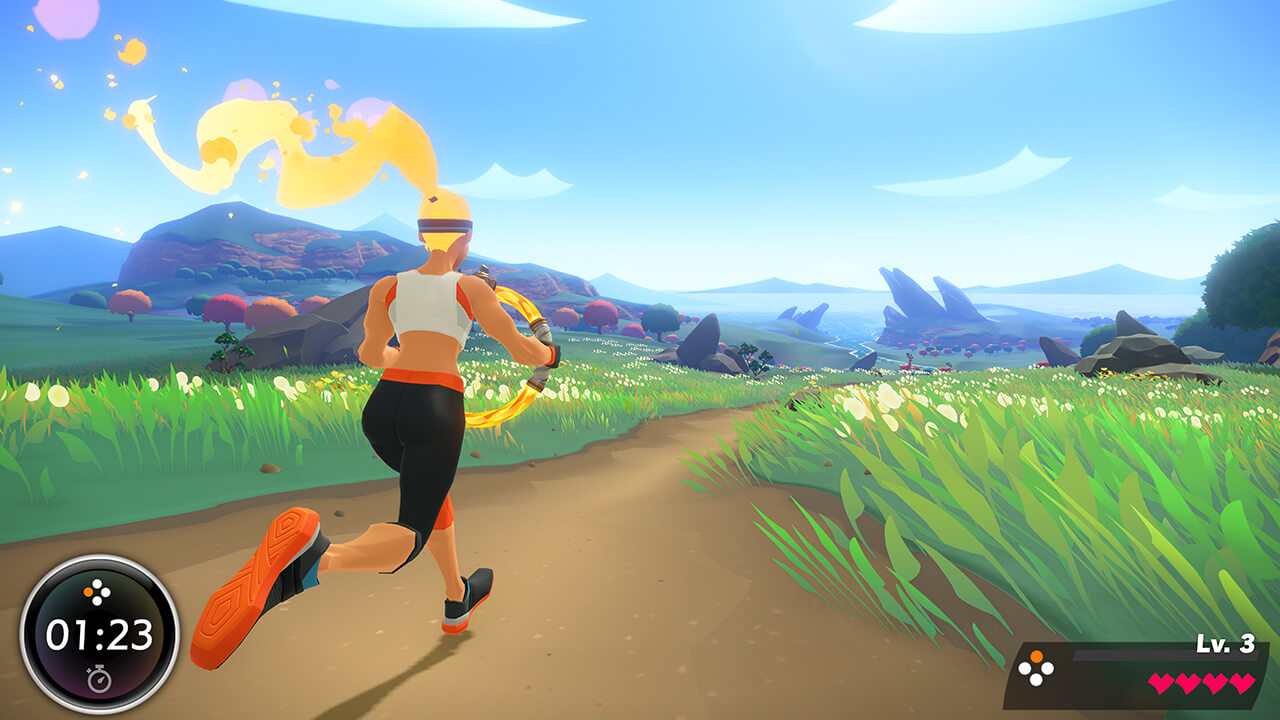 As I progressed through the world, I could interact with it with the help of the Ring-Con. The game could tell where I positioned the ring, and when I squeezed it, a powerful puff of air would blast outward. Not only was this useful for breaking boxes, but I could also point it toward the ground to get pushed into the air, like a jump. By squeezing the Ring-Con, I could create a big vortex of suction for collecting coins and other valuables. This meant that any stroll through the world wasn't just about admiring the scenery, but also about nabbing as many goodies as I could along the way. Along the way, you might even encounter other ways to convey yourself. At one point, my character hopped on a paddleboard, and I got across the river by tilting the Ring-Con back and forth like a set of oars.

Later,  my journey was temporarily halted by enemies blocking my path, initiating an RPG-style battle called a Fit Battle. In order to fight them, I had to utilize Fit Skills, which essentially put players through micro-workouts in order to deal damage. Fit Skills are divided into four color-coded categories—arms, core, legs and yoga—which are each super effective against enemies of a particular color. This gives players a chance to focus on all areas of their bodies, ensuring they don't overwork any one section too much as they make it through the game. The better I performed them, the more damage I inflicted against them. Defending against enemy attacks was also a matter of squeezing the controller against my stomach in a protective pose to lessen the damage I received. 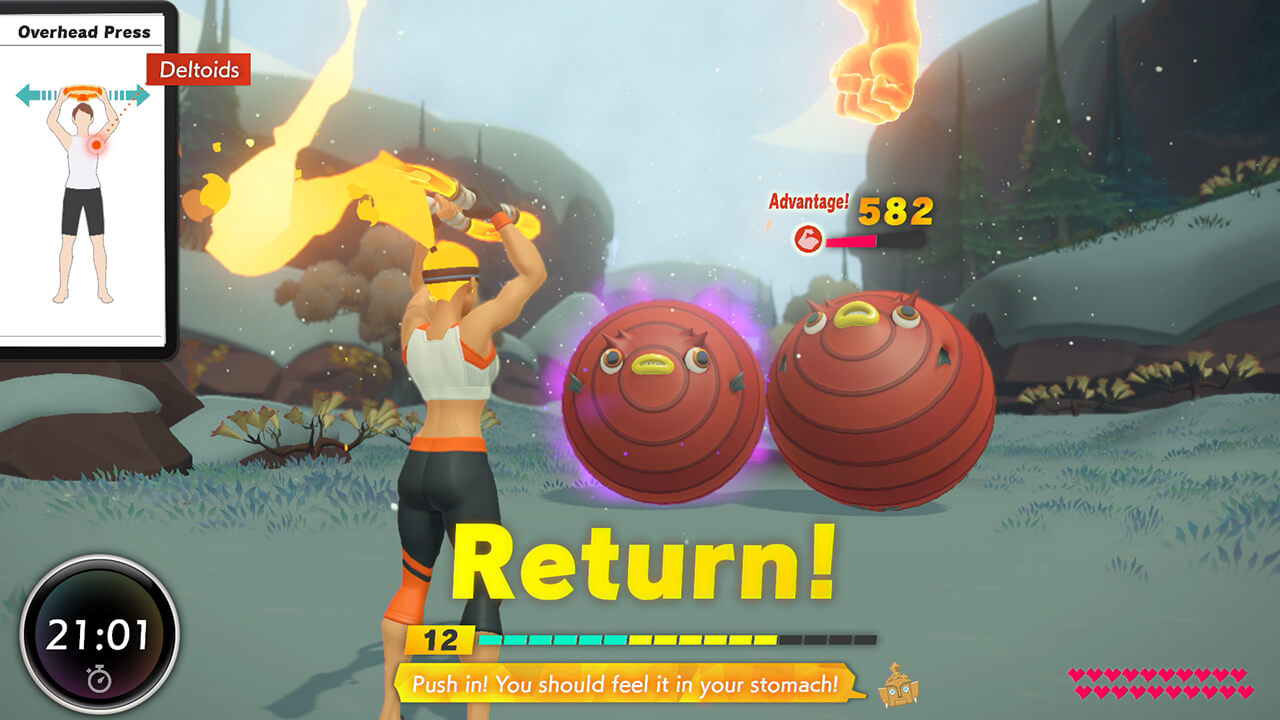 I collected a bit of experience along the way, increasing my in-game offensive strength as well as my defense. With those boosted abilities and my own personal growth in real life, I bet I'd  be equipped to take down Drageaux in no time flat.

The course I played during my time with the game was just a few minutes long, but I anticipate that as the game continued, the adventures probably get longer and tougher, incorporating more workout options all the while. When I was finished with it, I was certainly sweating, but eager to take on more challenges.

Don't have the time to take on a full-on adventure? Ring Fit Adventure has a few other Quick Play options to put your body to the test in short bursts. The Simple mode allows players to select from basic challenges for a quick but intense workout. I took the Pectoralis Major Challenge and squeezed the Ring-Con as many times as I could in 20 seconds, and was totally worn out by the end of it. I was a little embarrassed to see that some of the high scores at the end of the round were basically double my score, but the fact I was breathing hard at all just made me happy I was getting some exercise in. If I get to play more of it, I hope to increase my number quite a bit.

Quick Play also includes Minigames. I only got to play one—a whack-a-mole that involved rotating the Ring-Con and squeezing it to hit inner moles, and pulling on it to smack outer ones—but I found it delightful. Not only was it plenty of fun, but my heart was really pumping by the end of it. The game also includes Sets, which target specific muscle groups, and a customization area where you can build your own personalized exercise regimens. You can even set things up to do little exercises away from the Nintendo Switch during the day, if you're so inclined.

While I didn't get the chance to play Ring Fit Adventure for too long, I definitely worked up a sweat during my time with the game, and the experience made me excited to play more. Even though exercising is typically one of my least favorite activities, I had a ton of fun in the process and wouldn't realize I was moving so much until there was a lull in the action and I could feel it in my body.

Though I probably will prefer to play alone in the future, it wasn't too embarrassing to play with an audience, even though I wasn't necessarily great at the game yet. I also like that the game lets players progress at their own pace, allowing them to take breaks and set the workout intensity for themselves at each step.

While Ring Fit Adventure is currently the only game that utilizes the Ring-Con, I feel like there are tons of applications for it, and I'm excited to find out what they might do with it next.

Ring Fit Adventure, bundled with the Ring-Con and Leg Strap accessories, releases on Oct. 18 on the Nintendo Switch and will retail for $79.99 To learn even more, check out the trailer below.

Nintendo Switch is way more than a simple gaming console. Click HERE to find out what I thought of Sweat Proof Gaming's Nintendo Labo VR headset.