Riverdale Tweet Recap: Not Everything Can Be Fixed With Football

Riverdale Season 3 has returned with a vengeance. 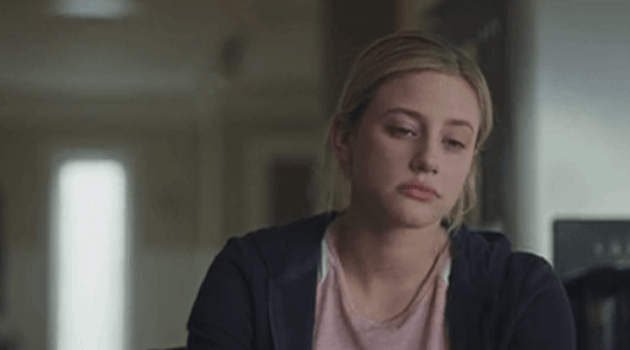 While I'm not quite sure what's going on in Riverdale currently, I'll continue to turn in week after week, if only to see Varchie in full swing.

Last week, we left our teenage heroes in quite an odd and confusing place. Archie was headed to jail after accepting a deal from the judge for two years in juvie in return for a guilty plea. Jughead found Dilton Doiley and Ben Button in the woods with blue lips and strange carvings on their backs. Neither seemed to be in good shape, but Ben appeared to be alive. Betty had a seizure after watching Polly and Alice throw the twins into a huge bonfire… only the twins floated in the air instead of burning up. And's that's about where we left off.

We start with our poor Archiekins being checked into a juvenile detention facility, where the guards douse him in water and throw powder on him. It doesn't seem to serve a real purpose other than creating another scene where KJ Apa has to be shirtless, which we're not particularly upset about.

How to bake an Archie cake:

It's obvious that Archie's time in juvie is going to be anything but sunshine and rainbows, especially because the warden seems highly shady. We then cut to Betty, who seems perfectly fine—if a little worse for the wear—after her seizure. She's been told by the doctor that her incident was stress-related, and Polly assures her that she must have been hallucinating as well, as Juniper and Dagwood are perfectly fine and definitely didn't get thrown into a bonfire last night.

I'm definitely not buying it, but Betty's still clinging to the idea that her family isn't crazy, so she moves on. She meets up with Jughead, who informs her that Dilton is dead and Ben Button is currently in the ICU. They agree to investigate this crime together, and just like that, Bughead is on the case.

please bughead, stop being the best couple in the world and in riverdale pic.twitter.com/t7ugGpMXcU

Archie meets his roommate, Mad Dog, who is not even slightly interested in Archie's endless charm. Someone who doesn't fall at his feet simply because he smiled at them? This is not the day for Archiekins.

Since Archie was given a Serpents tattoo by FP, he finds his fellow delinquents in the yard, and for just a moment it seems Archie might make it through juvie after all. But then, our blue-eyed baby Joaquin returns and ruins everything.

Look who's back. #Riverdale pic.twitter.com/7zZTuSzujc

Since Joaquin knows that Archie isn't a real serpent, he asks him to stab a Ghoulie to prove his loyalty. Archie refuses, obviously, and there goes his chance at protection.

Archie's playing guitar in the music room at jail, because that's totally something they have at juvie. He's attacked by Ghoulies who were sent to jail when Archie called the cops on them during the drag race. They take his shoes and beat him up, making Archie's day go from bad to worse.

Betty and Jughead head to the hospital to visit Ben, who is out of the ICU and stable. They learn that Ben got really weird after his piano teacher was murdered (Ms. Grundy, anyone?) and that a girl with a bow in her hair stopped in to say hello and left a weird stick doll hanging from the door. They're interrupted by Sheriff Minetta, who's interrupted by another cop informing him that a young boy is missing.

Jughead and Betty head to confront Ethel, as they've determined that she's obviously the girl with the bow in her hair who visited Ben. Ethel is being v shady, but she says that she made the "talisman" to protect Ben because he's her boyfriend. She tells them about Dilton's secret bunker and promises to lead them to it if they meet her at Foxfoot Bridge that night.

Meanwhile, Archie is having a tough time in jail. Mad Dog gives him a speech about doing whatever he needs to in order to survive, while making it clear that Mad Dog himself is involved in some highly shady stuff with the warden. Instead of taking Mad Dog's advice to heart, Archie dons some fresh kicks from Veronica and heads out to the yard to suggest a game of football amongst all the juvenile delinquents. I love that our sweet Archiekins genuinely believes that everything can be solved with some good old fashioned fun, but these are criminals, Arch. I just don't think football is going to fix all your problems.

Betty and Jughead head out to meet Ethel in the woods, but instead they run into the Gargoyle King, who looks like a bunch of sticks tied together and is somehow still creepy. It's unclear where this thing came from, but Betty and Jughead seem fairly convinced that it isn't just Ethel in a costume.

Others aren't so sure.

ethel is looking mighty fine in this lighting #Riverdale pic.twitter.com/4pB2RRqqLK

After that scare, Jughead and Betty still head out to find Dilton's bunker on their own. They poke around the place and realize that Dilton, Ben and Ethel were playing a game called Griffins and Gargoyles that features a lot of images of the Gargoyle King. They learn Ben and Dilton drank from a poisoned chalice as part of the game, meaning Dilton's death was technically a suicide.

They snap some pictures and the missing scout pops out from under the bed, giving everyone watching a heart attack.

me when the scout jumped out from under the bed #riverdale pic.twitter.com/CnnTvxYrmd

Veronica forgives Cheryl for stealing interim Student Boy President from her while Archie's in jail, and in exchange the River Vixens head out to cheer on the juvie football game. As in, they literally stand outside the gates and perform a choreographed dance to "Jailhouse Rock" to give the boys some spirit. Does no one understand that this is jail? These are criminals—they need legal advice and attitude adjustments, not cheerleaders!

In the middle of this performance, Hiram, of course, shows up to the jail because he has an in with the warden. He tells Veronica that she's been taken off of Archie's visitation list and she is not impressed. She tells him that there's nothing he can do to keep them apart.

I HATE HIRAM LODGE!!!! I HOPE THE THAT GARGOYLE MONSTER WOULD MAUL HIM!!! #Riverdale pic.twitter.com/DCA2RhOURv

Can Hiram please get a new hobby and stop obsessing over A SIXTEEN YEAR OLD BOY!!!! ITS CREEPY!!!!#Riverdale pic.twitter.com/0QxAcuGaTN

Right after that, the warden gives an order for the guards to attack the inmates. They're literally beating teenage boys with sticks and claiming that the inmates were rioting, even though they were playing a surprisingly friendly game of football. Back in his cell, Archie's told that Mad Dog died during the riot that Archie organized, even though Mad Dog made it very clear that he was somehow "tapped" by the warden and wouldn't be at the football game at all.

"mad dog died in the riot that you started"
archie:
#Riverdale pic.twitter.com/H2I8oyKsqR

Jughead and Betty confront Ethel about playing Griffins and Gargoyles with Dilton and Ben, but in the middle of their conversation, she freaks out and starts having a seizure. Oddly enough, the daughter of Alice's cult leader, Edgar Evernever, is standing in the corner as Ethel writhes on the floor. Evelyn is clearly a shady character here, and I definitely don't trust her.

Veronica puts on a poorly designed disguise and visits Archie in jail again, telling him that she's opening a Riverdale chapter of the Innocence Project to get Archie out of jail.

Archie is also told by the warden that he's been "tapped," and he's going to be the new Mad Dog. Considering Mad Dog warned Archie about this exact problem, things aren't looking so great for ol' Arch right now.

At this point, we cut to Kevin, who has been dealing with a nervous Moose all episode. Moose's father insisted that he join the ROTC, so he hasn't been very affectionate or open with Kevin in public. Kevin decides to fix this problem by joining the ROTC himself, and he's immediately accepted because Moose's dad was friends with his own father.

#Riverdale Kevin walking in to join Moose in RROTC pic.twitter.com/pgpFASoRs8

We then cut to all the parents meeting up, where Hermione is giving a speech about protecting their children from a secret they hid many years ago. The parents obviously know about the Gargoyle King, as Dilton dying with blue lips seems to have special meaning to all of them. After all, everyone else in Riverdale is shady, why wouldn't the parents have a long-kept, potentially life-ruining secret, as well?

How many secrets are the adults of this town hiding? #Riverdale pic.twitter.com/vUppuc5YI5

At the end of the episode, Betty and Jughead head to Ben's room in the hospital to pay him another visit, only to find him sitting at his window. He spouts some nonsense about joining Dilton and not being afraid of ascension and then he throws himself out the window!!

riverdale has done a complete 180 since season 1 and i don't even know what it's about anymore but i cant stop watching???

Me after watching the new episode of #Riverdale pic.twitter.com/9OslRkKQVm

so Riverdale is wild – "Don't worry you'll fly too." I️ didn't know I️ was watching the movie IT #Riverdale pic.twitter.com/2mBsFPRReY

See you all next week!

Looking for more ways to show your love for this insane show? Click HERE for 12 iconic Riverdale quotes that make excellent Instagram captions.