If there's one person worthy of hate in Riverdale, it's absolutely Hiram Lodge. 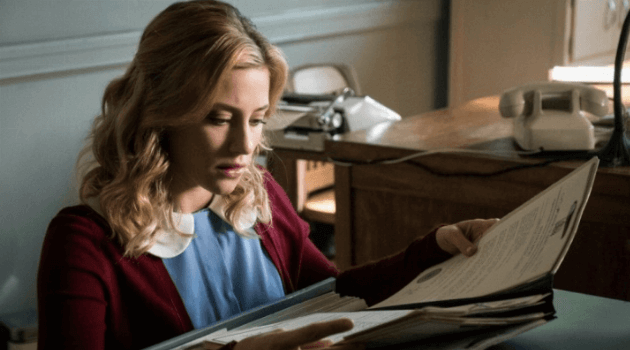 However, in an odd twist of events, last night's episode made me change my mind about my least-liked character in this series. Congratulations, Ethel Muggs—you've officially taken the No. 1 spot of people I can't stand to see on my TV screen.

Wondering why I feel so strongly about this? Keep scrolling for my Riverdale tweet recap for Season 3, Episode 7: "Chapter Forty-Two: The Man in Black. "

We open on Jughead and Archie wandering through the wilderness. For some reason it's very foggy and there's nothing around them. Are there no towns near Riverdale? Why is everything so empty?

Did Riverdale turn into The Walking Dead lmk? #Riverdale pic.twitter.com/Hky37iWxug

As usual, Archie can't hack the reality of his situation. Instead of moving along as Jughead suggested, he insists that they stop at a very empty, very creepy farm to spend the night.

As they walk onto the property, a young girl pulls a gun on them, ordering them to stop. Young lady, who gave you that weapon? Apparently irresponsible parenting is the norm both in and out of Riverdale.

As the quick thinker he is, Jughead claims that their names are Cal and Biff.

Biff? He chose Biff? Out of all the names in the world, BIFF? #Riverdale

The girls, Laurie and Gracie, are not buying their story, but Archie jumps in with a tale about being robbed on a train and just looking for a place to stay. For some reason, they believe this story, and invite Jughead and Archie in for some stew.

So a couple weeks ago Archie was struggling to stay alive in an underground prison fighting ring, and this week he's eating stew with two armed girls in a creepy abandoned farm. This season has been quite the ride.

You, idiot: I thought Archie was in prison.

Me, avid #Riverdale watcher: No, his name is Biff is now that was two weeks ago, moron. He and Jughead are on The Walking Dead now, apparently. pic.twitter.com/inZgNI8ctR

Against Jug's better judgment, he and Archie sleep in the barn that night. As payment in the morning, Archie agrees to move some hay bales for Laurie. I'm not sure why the hay needs to be moved, considering there aren't any animals around that require food. But sure, whatever, let's get Archie shirtless again.

Meanwhile, Jughead decides to head into town to take some pictures. Unfortunately, town isn't looking much better than the barn.

Jughead finds G+G runes everywhere, as well as a mural of the Gargoyle King. However, there aren't any people around, save a very creepy-looking old woman.

Yeah this random lady being the only one in town isn't worrisome at all. #Riverdale

Jug approaches the woman and she immediately launches into a story about how the town was ruined. She says that the symbols started showing up in town at the same time that Fizzle Rocks made an appearance.

Jughead takes her story into account and continues his wandering, where he finds a group of three young girls playing G+G. The girls tell Jug that all the men in the town left to work on the prison. They also drop the news that the prison is making Fizzle Rocks. But if these three random girls know that, this obviously isn't the most covert of operations.

Flashback to Archie, who's being just dumb as ever. For some reason, he's allowing Laurie to shave him? Not only is this a deeply dangerous situation, it's also pointless. You're a grown man, Archiekins—shave yourself.

So we just let strangers near are neck now with a sharp object #Riverdale pic.twitter.com/PXmT5loQuT

Suddenly, Laurie decides to kiss Archie, and I have feelings. For starters, how does shaving translate into making out?

Also, this pair has spoken a total of about 20 words to each other. You can't just run around kissing random people when you're a fugitive on the run, Arch.

Ronnie would not be happy.

However, Archie stops the kiss and then proceeds to tell Laurie every detail about his life.

He tells Laurie that he has a girl at home, though you wouldn't have guessed that by how eager he was to make out with her. He tells her about Hiram. He even tells her that his name isn't Biff. Laurie doesn't seem surprised at all, which should have been Archie's first clue that something was up.

Of course, Archie isn't that smart.

So he just keeps talking, spilling all his secrets.

archie why cant you ever shut up #Riverdale pic.twitter.com/Gz1eBSxyvY

And in repayment for his honesty, Laurie knocks him over the head with a pan.

Oh… the girl you just met and spilled all your secrets to knocked you out?… I'm shocked #riverdale pic.twitter.com/A0kMHTxKpM

Thankfully, Jughead—the actual useful member of this duo—is still around to save the day. He sees Hiram pull up to Gracie and Laurie's house and head inside. Because why wouldn't Hiram be at this creepy, abandoned town?

Also, how does Hiram have time for all these little excursions? He's literally everywhere all at once and it's just not possible. Focus on one shady deal at a time, man.

Doesn't Hiram have better things to do than go after a minor? Seriously? #Riverdale pic.twitter.com/gJbSxpexSD

Jughead breaks into the barn and sets Archie free. Archie, however, isn't over being dumb and insists that he's capable of killing Hiram.

"i can kill him" so you literally got in jail for being falsely accused but if he actually did that imagine what would happen #Riverdale pic.twitter.com/8fZmzn3BGF

He grabs a pair of garden shears—as everyone knows those are the best weapons for murder.

Doesn't a tiiiiny part of you want to know what Archie was going to do to Hiram with those garden shears? #Riverdale #TheCW pic.twitter.com/yvLJddKSjs

Thankfully, Jughead convinces Archie to use his brain and they run away before Hiram makes it into the barn.

Jug: "I thought you weren't going to listen to me back there"

Archie: "me too" #riverdale pic.twitter.com/oIh167VxG5

The pair decides to head to Jughead's mom for help. Finally.

But I would like to know what Jughead's mom is going to do? Archie's mom was a lawyer and she was useless. What can Jughead's mom offer in this situation?

Why ain't they going to see Archie mom?! Like she ain't a whole lawyer! #Riverdale pic.twitter.com/NmVjcMNAMZ

After Jughead and Archie's part of the story, we switch on over to Veronica. I have to be honest—within this episode, Ronnie's story is the least interesting by far. So let's sum it up quickly.

She moves out of her house and into the speakeasy to avoid her parents. She realizes that her businesses aren't making enough money, so—with Elio's help—she throws a Casino Night to bring in some extra cash. On the actual night, however, Elio is winning everything and it looks like V's business is about to go bankrupt.

She sits down and plays against him, putting the deed to Pops on the table as her bet. Even though it was obvious that Elio was cheating, V wins, makes the money she needs and ultimately gets to keep her businesses.

She later reveals to Reggie that she was tipped off by her dad that Elio was going to cheat, so she brought in a special dealer to ensure she could beat him. Pop isn't a fan of her shady business methods and informs her that she shouldn't be like her father. As if she needed more proof, Pop also tells her that Sheriff Minetta's body was just found, though they're not 100% positive it was his, as it was decapitated and the hands were sawed off.

Veronica: Maybe my dad isn't such a bad guy after all.

That's about it for V. She gets to keep her businesses and her dad still sucks—what else is new? On to Betty's story.

Betty is stuck in the Sisters of Quiet Mercy and she's doing her best to prove that she's sane, while still investigating her case. And girl is struggling.

JUGGIE SWEETIE CAN YOU PLEASE GO TO SAVE YOUR GIRL #Riverdale pic.twitter.com/kSBAFnumOO

She's shown ink blots that look like a dead body, the Black Hood and the Gargoyle King, but she happily says that she sees very positive images. However, her lies do very little to help her situation.

She's given a cup full of Fizzle Rocks, as Sister Woodhouse tells her that all the patients get the "special candy" for "good behavior." What's next? A nice, cool cup of Kool-Aid?

As if things weren't bad enough for Betty, she's then confronted by Ethel Muggs. How did she get here? We don't know, but she's just as annoying as ever. She confesses that her and the Gargoyle King have become super close during her time at SOQM. She also tries to tell Betty that Jughead isn't into her.

Me when Ethel said that Jughead isn't into Betty anymore: #Riverdale pic.twitter.com/8vq9gC36ZH

Crazy and deranged Ethel mentions that they shared a very "intimate moment" in the bunker.

Ethel Muggs: We are going to be a ship #Riverdale pic.twitter.com/5Pwnc2gP72

If there's one thing Betty can do well, however, it's fight for her man. She straight-up tells Ethel that she know about the blackmailed kiss. Ethel is understandably upset at being called out, and tells Betty that she's the Queen Bee here and Betty better fall into line.

Okay Ethel's really starting to piss me off. #riverdale pic.twitter.com/8kGK6J2Gql

As Betty is outside working, she sees Claudius Blossom show up in a delivery truck. At the same time, Hiram meets with Sister Woodhouse. More shady behavior from the two shadiest families in town. Shocking.

After a failed attempt to break into the Gargoyle King's chambers, Betty decides she isn't playing nice anymore. She starts a fight with Ethel over Jughead, delivering some pretty savage lines in the process.

As Ethel tells Betty that she'll never meet the Gargoyle King, Betty fakes a seizure, landing her in the infirmary. She finds her medical file and discovers that Hiram has been dictating her dose of Fizzle Rocks. Having found what she needs, she heads down to the basement to find the door with the red X that allowed V to break Cheryl out.

She finds it and it looks like she's homefree, but once she pops it open she only sees a brick wall.

@CW_Riverdale #Riverdale Betty's face when she saw that wall pic.twitter.com/uIF2ZvdPAL

The sisters, tipped off by Ethel, find her and she's forced to take a dose of Fizzle Rocks. Then, she's taken to meet the Gargoyle King, resulting in some pretty heinous screams.

They need to leave Betty alone. This girl needs a break! #riverdale pic.twitter.com/BoHbTOA7dL

I just have one question, V is so busy planning a Casino Night that she forgot about her best friend? Ugh, Betty can't count on anyone but herself.

I really want to fight everyone for Betty!!! Where are her friends????? #Riverdale pic.twitter.com/l3OD7nJF3B

After her meeting with the Gargoyle King, Betty is shown the ink blots again, and this time she reveals what she really sees. Not only does it make Sister Woodhouse happy, but we're also shown the Gargoyle King standing behind her as Betty recites a G+G prayer.

Me after all what happened to betty at the episode #Riverdale pic.twitter.com/eLJcuG1HuU

Was the Gargoyle King really there? Is Betty too far gone to be saved? Will Archie ever stop being dumb? Honestly, I have no idea.

Me at the end of every #Riverdale episode: pic.twitter.com/qokidtXmHF

Hopefully next week's episode will provide us with more answers to our questions and less scenes of Ethel Muggs.

Looking for the perfect way to show off your love for Riverdale? Click HERE for 12 iconic Riverdale quotes that make excellent Instagram captions.