Riverdale Tweet Recap: Isn't Jughead Supposed to Be the Smart One? 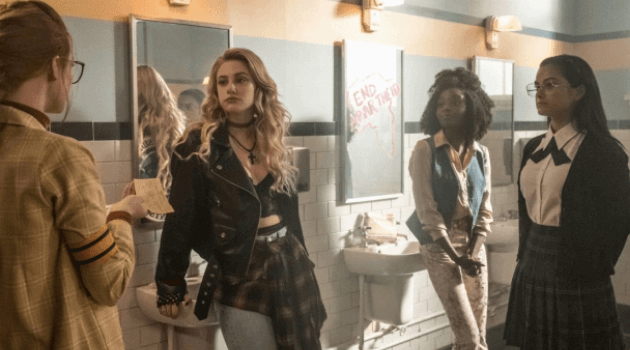 Last night we were blessed with the flashback episode of Riverdale and it did not disappoint. There were plenty of steamy moments, a range of iconic looks, and enough confusing content to give me a little sympathy for the fact that the parents are more than just the terrible people they sometimes seem to be.

But don't just take my word for it. Keep scrolling to see our Riverdale tweet recap for Season 3, Episode 4: "Chapter Thirty-Nine: The Midnight Club."

We pick up right where we left off, with everyone playing this ridiculous Griffins and Gargoyles game. Honestly, I wish we had one of the rule books because I just can't figure out why this game is addictive enough to cause this much mayhem.

Me trying to see what's so fun about Griffins and Gargoyles #Riverdale pic.twitter.com/Eeo3zMEGLr

Still, cause mayhem it does, as it's become so entrenched into the culture at Riverdale High that Hermione herself tells the kids they need to stop playing.

As mayor of the town, she declares that the game is banned, and she even sets up a crisis hotline, overseen by our wonderful Kevin, that should be contacted if anyone is caught playing the game.

You know it's really serious when the mayor herself shows up to your class to talk to you about something. #Riverdale pic.twitter.com/o9K8mBQBoy

While Betty and her pals have smartly stayed far away from actually playing the game, Betty's investigative instincts aren't going to give up that easily. After talking to the coroner and learning that a similar death to Dilton's suicide took place at Riverdale High years ago, she confronts her mother and demands to know what she's hiding about G+G.

To our surprise, Alice agrees to tell her, and we're tossed back into the past, complete with a stunningly retro title slide. Sadly, in the past, Alice is pregnant and crying in a bathroom stall. Hermione tries to comfort her and edgy Alice blows her off, mumbling something about the fact that FP blew her off for a River Vixen. Since the gang has to be complete, Penelope waltzes into the bathroom and asks for hall passes, throwing some very mean comments Alice's way as she does it. We immediately learn that edgy Alice doesn't respond well to rudeness, as she slaps Penelope across the face and starts an all-out brawl in the women's bathroom.

Fighting is bad and Alice could definitely use an attitude adjustment, but I have to admit her face in this scene is simply iconic.

We're also shown a scene of FP and Fred streaking, mostly because Riverdale loves to make their male characters take off their shirt and partly because they need to show why all the parents end up in detention together.

Thus, all the iconic parents of Riverdale are given Saturday detention, much to Penelope's chagrin.

penelope showing up to detention #Riverdalepic.twitter.com/U0NnCAk6SK

The students are told not to talk, but obviously they don't listen to that, especially because Principal Featherhead leaves the room. So the adults of this town were always irresponsible? Good to know.

Alice has a very angry Southside vibe that she's totally embracing, as she's sitting in the corner carving her initials into the windowsill. Other students tell her to stop, but Alice listens to no one.

In a very Archie-esque moment, Fred starts whining about the fact that none of them know each other. To remedy that problem, Sierra suggests a game of Secrets and Sins. They never explain the game, but it seems to consist of everyone telling each other their secrets, some of which are more horrifying than others.

Sierra confesses that she's been secretly dating Tom for months, despite the fact that their parents don't approve. Hermione talks about how much she likes Hiram (if only she knew). Fred confesses that he wants to stay in Riverdale forever, especially since he needs to take care of his sick dad.

When it gets to Alice, she instead turns her confession on FP, angrily telling him that he's a fake North-Sider and that he'll never escape the trailer park where he lives. Now, I'm not saying she's a hypocrite, but…

Then, in the most stunning reveal of the game, Penelope tells everyone that she was adopted by the Blossoms for the sole purpose of being Clifford's wife someday.

Penelope was adopted as a Blossom and groomed to marry her adopted brother?!?! #Riverdale pic.twitter.com/pUwD7mEsbC

Isn't that a little unnecessary?

Also, I wouldn't share that with total strangers, but it serves the plot in that Penelope and Hermione start fighting, earning the entire group four more Saturday detentions.

Apparently the young delinquents start to bond through their shared misery, eventually coming across G+G when Hermione breaks into the teacher's desk, meaning we can basically trace this entire problem back to Hermione. Figures.

Although the students all know that someone died playing the game at another school, they very illogically agree that means they have to play it. Which, what?

"I heard someone died playing this"

They end up getting more and more serious about the game, really embracing their characters and taking the seemingly-ridiculous missions very seriously. We get a tiny moment with FP and Hermione and Fred and Alice, but it seems like it's more to satisfy our need to see Lili and KJ together at least once. They share a kiss and it's terribly beautiful, but just not that relevant to the story.

Skipping ahead in Alice's story, the kids eventually get so addicted to the game that they being sneaking into the school at night to play it, dubbing themselves the Midnight Club. One day, they all find invitations in their locker inviting them to an Ascension Party, where they will rise to the next challenge presented by the Gargoyle King. As we know from Ben and Dilton, this is a very bad idea.

Hiram, always the helpful loser, brings Fizzle Rocks to the Ascension Party, which is apparently the old school version of Jingle Jangle.

Everyone takes some fizzle rocks and starts celebrating… except Alice. She's just walking through the school watching all her friends lose her minds, and it's actually a little comical.

That is, until she heads to the bathroom and find the walls covered in "flip for your fate," as well as two chalices filled with blue liquid and a coin. As the smart girl she is, Alice hightails it out of there… and runs right into my favorite pile of sticks, the Gargoyle King.

As Alice deals with this shocking discovery, she also sees Principal Featherhead arrive at the school. Not wanting to get in trouble, she slips out, leaving all her friends behind.

The next day, Principal Featherhead is missing. Alice tells her friends that she saw him at the school that night, but Penelope convinces everyone that they can't say anything, or else they might get blamed for his death.

A few days later, they find Principal Featherhead's dead body in a closet at the school, complete with blue lips and markings on the door.

GIRL THEY FOUND HIS BODY IN THE CLOSET GIRL WHEW CHILD 🤭 #Riverdale pic.twitter.com/Qw3FoirHvk

The Midnight Club meets up and basically loses their minds, each one of them accusing the other of killing Principal Featherhead.

Trying to figure out who in the midnight club is the killer. #Riverdale pic.twitter.com/0Znv0EErsj

Eventually, Sierra says that they have to destroy the game, so they each take different pieces and agree to burn the instruction manuals so no one else can find the game. They make a pact not to discuss G+G ever, sealing it with spit-ridden handshakes.

Ok, the pact I get but the stuff they did after? NO NO NO! #Riverdale pic.twitter.com/3PGUCDr6eF

After the past, they all stopped interacting with each other, slowly becoming the terrible parents we know and hate today. Fred sold his guitar and went into the family business, Hermione and Hiram grew more serious in their relationship, Sierra and Tom broke up due to pressure from their family, Penelope embraced her relationship with Clifford, FP joined the Serpents and Alice put herself together and started her relationship with Hal Cooper.

At this point, we flip back to the present day, where Alice is telling Betty that she simply can't play the game. She explains that Featherhead's death was ruled a suicide, but they all knew it had to be a member of the Midnight Club. She explains that the game gives you permission to hurt others and yourself, and that Betty must not play.

Betty agrees that she won't play, but claims that she has to investigate it. She checks up on her mother's story, finding the carving of her initials in the windowsill of the school, and eventually coming across two G+G chalices in the trophy case.

She immediately runs to the bunker to inform Jughead. At this point, I'm  thinking about how nice it is that she knows the full story, imagining that Jug is going to give her the support and help she needs to put all the pieces together.

But is that what happens? Of course not! Instead, Betty descends into the bunker to find Jughead and his Serpent friends, including Cheryl, Toni and Sweet Pea, playing the game.

me when they showed jughead playing the game #Riverdale pic.twitter.com/oN85YmNGsk

Not only that, but Jughead is legitimately excited about his prospects, raving about how he's getting close to ascension, with no trace of his normally tactful and measured mindset.

Gosh, you're smarter than this Jug. Don't ascend; it's a trap.#Riverdale pic.twitter.com/eZTP8AZcRt

What is up with this game?

#Riverdale Is Jughead an actual idiot? I mean come on pic.twitter.com/WXZ7pT0Vzw

And how has it managed to corrupt our lovable Jughead?

Whatever is going on, it's simply not okay.

Actual image of me watching #Riverdale every week trying to figure out what the heck is going on: pic.twitter.com/150vlkvl7M

See you all next week for more madness and mayhem!

If you need a little break from the madness of the Riverdale universe, click HERE for the 14 memes about Chilling Adventures of Sabrina.