13-year-old Robin Warren is an advocate for wild horses and the co-founder of a petition that has helped save and raise awareness for wild horses across known as the U.S. She's known as "Wild Mustang Robin," in tribute to animal rights activist Wild Horse Annie. 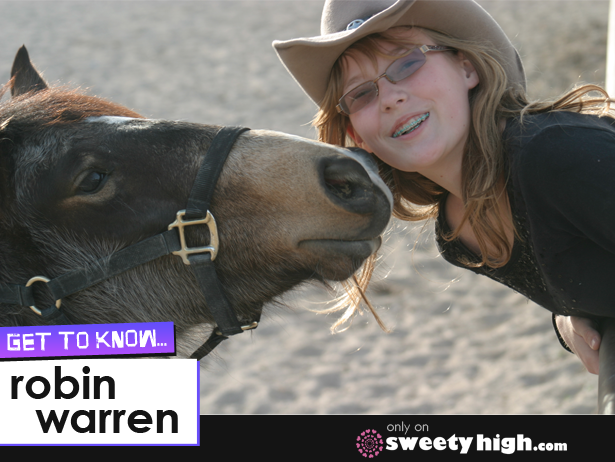 In a recent interview, Robin explained why the protection of wild horses is so important and how she plans to continue to champion their rights!

Robin Warren was about 9 years old when she had her first encounter with wild horses in the Virginia Range in western Nevada.

"Since they were slightly tamed, they were coming to people for food and such," Robin said. "Me and this one stallion that I call Sweetie Pie automatically bonded. He even brought over his one foal and one mare, so it was a really magical moment. He didn't leave my side and it was really sweet."

The same year, Robin also read two books that had a profound influence on her. The first was Chewy and Chica: The Puppy Place Special Edition by Ellen Miles. It was about two kids who created a petition to end puppy mills in their state.

The second book was Mustang: Wild Spirit of the West by Margeurite Henry, a book based on a true story about a girl called Wild Horse Annie who made it her life's work to save wild horses.

"I thought it sounded really awesome to make a petition to save animals," she said. "I've always been a big animal lover. After I read Mustang: Wild Spirit of the West I talked to my mom about it, and that day we wrote up a petition and just started going out, getting ink signatures door-to-door."

The petition set out to save wild horses from being slaughtered, as well as rounded up and placed into holding facilities by the government. It was a big victory, gathering more than 132,000 signatures.

However, the challenges facing wild horses do not end there.

"One of the biggest threats to wild horses is the mismanagement of the ones in the wild," Robin explained. "There aren't many of them in the wild and there's a really big chance that if we keep taking them away, they could become seriously endangered or possibly even extinct."

"When they leave really tiny herds out there, they get together and breed," she said. "That can cause them not to be healthy, but to be sick because they're not living in big enough groups to be able to breed properly."

To help fight these issues, Robin created the Youth's Equine Alliance, or YEA! She uses the alliance to discuss the problems that face wild horses with her friends in Las Vegas, as well as all over the internet.

More recently, Robin established The Wild Horse and Burro Initiative to further the protection of these wild animals.

"It makes sure that, no matter where they are, wild horses and burros will be labeled as 'wild' and that they will not be able to be hunted down," she said. "They will not be game animals."

Robin said that one of the main reasons she's passionate about wild horses is that she can really relate to them.

"I understand what it's like to be separated and to have that anxiety and grief over your family," she said. "As they're being herded, sometimes foals and old horses get left behind and they get separated. In my past, I was separated from my family. My father passed away when I was four years old. I don't want any living thing to have to go through the pain and anxiety and grief of that."

To learn even more about Wild Mustang Robin and her work, be sure to check out her social pages, listed below! You can also tell us the causes you're passionate about at Sweety High!