Since the She's All That remake, He's All That hit Netflix last month, the modern rom-com has quickly become a fan favorite, and it's not hard to see why.

With stars including Addison Rae and Tanner Buchanan, it was sure to draw in lots of attention, and the film's gender-swap of the classic roles makes for some unexpected twists to the iconic '90s flick. New character Sebastian Woo is a science whiz (and probably future millionaire) who just happens to be one of our favorites, but did you know that the role was actually tailor-made for actor Romel De Silva?

We got the chance to chat with Romel about the exciting role, working with Addison and Tanner and how social media throws a new wrench into the whole equation. Keep reading to find out what he revealed.

Sweety High: Were you a fan of the original She's All That before getting cast in this remake?

Romel De Silva: I loved She's All That! I grew up watching these movies and idolizing Rachel Leigh Cook, Matthew Lillard and Freddie Prinze Jr. Also, who wasn't obsessed with Usher as a kid? I know I wasn't the only one who tried the dance at prom. It's iconic. 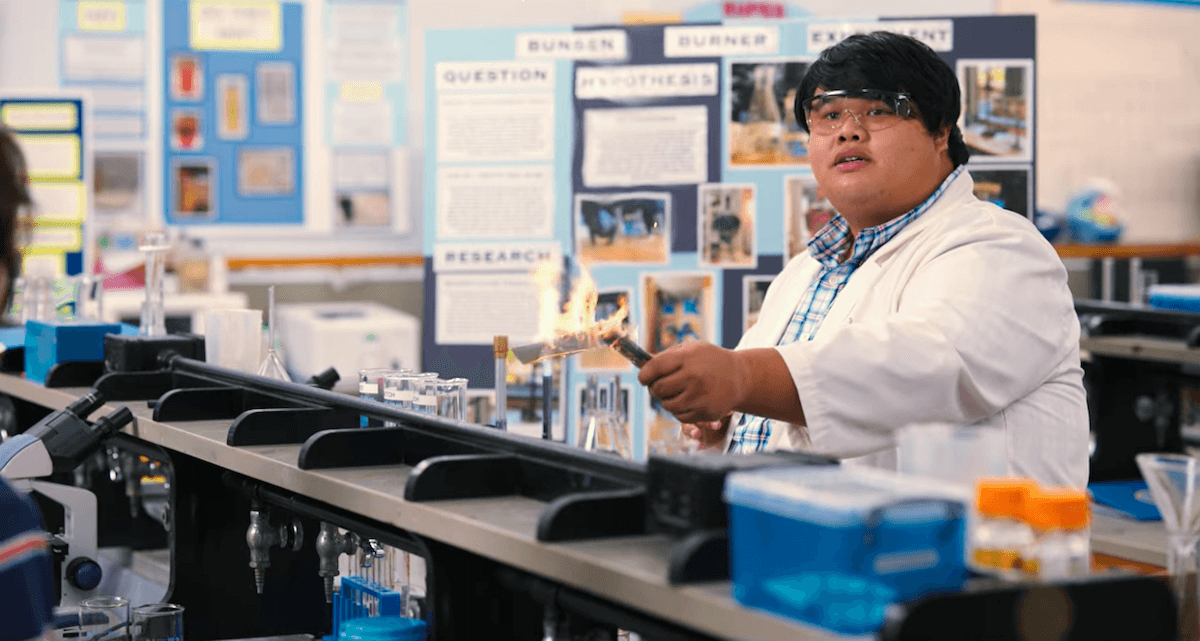 (He's All That via Netflix)

SH: What has it meant to you to get to retell the story of that classic teen movie? What do you think the story gains with the gender swap for the main leads?

RDS: Getting to tell this story again from this perspective is so exciting. It's interesting to bring in an element that wasn't even present in She's All That: social media. Having the pressure of an online persona and getting through high school is tough. It's meant so much to me to be part of this story in this way. Having the gender roles switched also brings in an even more complicated concept. There are pressures that are brought forth that wouldn't even occur to some guys. It's important for us to see how that "need" to be perfect is a struggle and we should strive to be true to ourselves.

SH: In what ways are you and your character, Sebastian, similar? In what whats are you different?

RDS: Sebastian is a huge nerd, and so am I! I tried my best at school, I love Marvel, Star Wars and anime. I even write poetry sometimes to flex my creative muscle and cringe-perform them to friends! We're different in that I wouldn't be that careless with fire. It scares me!

SH: What was it like working with Addison and Tanner? What was your favorite memory from the set?

RDS: Addison and Tanner are so great to work with. It's amazing to see Addison's acting debut. She adapted like a pro. She was incredibly professional on set, learned her lines and worked very hard. With Tanner, I'm a huge fan of Cobra Kai, so it took a lot out of me to not bug him for spoilers. He's so talented. One of my favorite memories was when we were filming prom—Tanner brought his tap shoes, and being a musical theatre kid myself, we were doing tap tricks and showing off small routines. It was all very silly but fun!

SH: What do you think is the most important message you learned from working on the film?

RDS: Bring as much of yourself to your work. I didn't initially audition for Sebastian. They kind of combined and wrote the role after my audition and our director, Mark Waters, helped me shape who Sebastian became. As an actor, it's easy to fall into the trap of doing what you assume people want. Create your path.

SH: What do you think fans of the original film love about this remake?

RDS: Fans of the original film will love the callbacks: the bet, the dance numbers, the familiar characters. Also watching Rachel and Matt is a joy! It's even written by the same screenwriter, R. Lee Fleming Jr. The movie remakes this tale with such respect, so it's hard not to love!

RDS: It has been a blast to work with this incredible cast and crew. Making a movie in the middle of the pandemic was no easy feat! Thanks to everyone involved for creating a safe and fun environment to work on!

Love the movie? Click HERE for our favorite quotes from He's All That to use as your next Instagram caption.