Roméo Testa Talks "Light It Up" and More!

19-year-old Roméo Testa is a rising singer-songwriter who has reached audiences across the nation this year with his single "Light It Up," which is featured in a viral ad for 7UP. 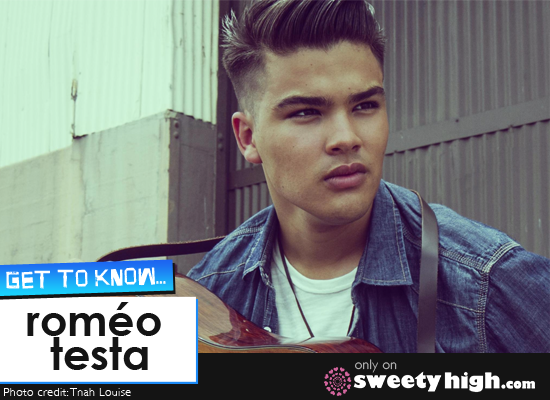 We spoke with the artist earlier this week about his musical upbringing, his EP and upcoming album, and the School Night show on June 30!

Roméo Testa was born in Costa Rica and lived there for a year and a half before moving to Los Angeles with his family.

"My dad had a restaurant and he used to have a band down there, and they always used to play, so I was brought up around constant music," Roméo said. "All of my family friends would constantly get together, and at the end of the dinner parties we'd end up singing and playing bongos."

Roméo was exposed to a lot of world music, including bands like Ozomatli. He also listened to a lot of blues music with his father.

"We used to listen Nothin' but the Blues on KJazz every Saturday and Sunday night," he said.

His mother was also a fan of French house music in the 90s.

"All of that came to fruition when I was 13," Roméo said. "I started listening to everything that I could get my hands on, like my parents' old cassette tapes and CDs."

He combined all of those different styles to create his own unique musical sound.

"I couldn't have done it without my parents' influence," he said.

Along the way, Roméo also decided that he wanted to learn guitar.

"After a good two years of locking myself in my room for hours and hours on end with a TASCAM recorder it just kind of started happening," Roméo said. "I didn't really have a lot of other outlets. I didn't have a T.V. in my house as a kid."

Instead, Roméo would pass the time by spending six to seven hour-blocks playing the guitar.

"Eventually I started humming along with what I did, then singing along," he said. "It all happened on accident, really. There was no tactical way I went about it."

From there, he started crafting his own songs. Roméo has been working on his debut album, tentatively titled Like Children, for about 3 years now, and has written about 90 songs for it so far.

His first EP, The End, came out in May.

"I just wanted the EP to really represent what was going to come out on the album, and give a good look into what's been influencing me and the styles of writing I go between," Roméo said. "I thought the songs on the EP were a great sample platter of everything I've been doing over the past 3 years."

His two favorite songs on the 6-song The End are "I'm So Down" and "With You."

"Those two songs are some of the best writing I've done thus far," he said. "They're two songs I can constantly listen and not go, 'Oh gosh, I don't want to listen to myself sing.' It's a good sign when that happens."

Another standout track on the EP is a cover of "Light It Up," originally by For King and Country. Roméo heard the song for the first time early last year.

"As soon as I heard it, I knew it would fit so well with everything else on the album. The songs mixed perfectly," he said. "What I like to do with my music, personally, is to make songs that you can hear in movies, on a really big cinema stage."

The track ended up getting produced by Dan Heath, who has worked on various arrangements for Lana Del Rey.

"I think that really helped me find an identity in that track," Roméo said. "It's hard to sing a song you don't write and you're not part of the emotional process of, so I think being in the production room with him and going through the song helped, just because I come from a classical background. Having all of that big instrumentation and orchestration really helped it become mine."

The song also resonated with him deeply on a personal level.

Best of all, Roméo felt that "Light It Up" was the perfect thematic match for his upcoming album.

"It's basically the story of my life in an album, and I felt like that song really would completely fit," he said. "It just means everything I want to stand for in music and publicly."

Roméo's version of "Light It Up" is also being featured in a commercial for 7UP, which is being played on television sets nationwide all summer.

"It's completely unreal," he said. "You don't get those opportunities a lot as a new artist. I can't believe this is happening. To see my name for the song in a commercial on T.V., where millions of people are watching, it's really the next level for me. That breaks a lot of bands these days."

"It's very soulful, and I have a lot of soul influences, but there's definitely some pop aspects in there, and I'd really like to make it as big as possible," he explained.

His upcoming album, Like Children, has Dan Wilson as its executive producer. In the past, he has produced hits including Adele's "Someone Like You."

"I pulled from a lot of soul, blues, hip-hop and classical influences," he said. "There's a lot on there but we're making it one big cohesive sound. It should be a pretty well rounded album."

While that's all he could tell us for now, he said he was excited for everyone to get the chance to hear it!

Roméo will also be joining Some Kinda Wonderful, White Sea and Fink at the School Night show at the Bardot in Los Angeles on Monday, June 30. Click here for more show and ticket information!

For even more on Roméo Testa, be sure to check out his social pages, as well as links to buy "Light It Up" and The End, listed below! You can also listen to his full EP here and see his ad for 7UP below.

Be sure to join our community at SweetyHigh.com to share your favorite new artists and more with our sweet community!