Bettina Chen is one of the co-founders of Roominate, an innovative and creativity-inspiring engineering toy created just for girls! We spoke with Chen about her own personal experience with engineering, girl power and toys to find out all about Roominate! 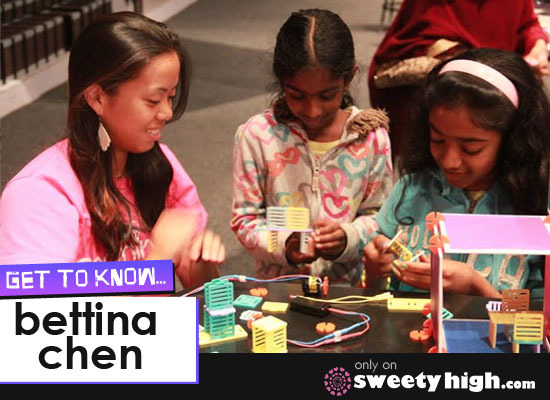 Bettina Chen grew up playing with a lot of building toys and doing a lot of crafts.

"I played with my brother's hand me down Lego and Lincoln Logs," she said. "Just building and creating with my hands really helped develop the skills that got me interested in engineering later."

Playing with building toys at a young age can help children develop their spatial and motor skills as well as help them build confidence. Chen's foundation in the basics drew her toward engineering when she went into college.

Together, they wound up discussing the state of women in engineering. Less than 15 percent of girls enter college intending to major in science, technology, engineering or math, or the STEM fields. Only 11 percent of engineers are female.

"People take the statistics to mean that girls aren't as good at these fields as boys," Chen said. "I don't think that's the case."

Instead, Chen believes that girls are influenced by these misconceptions.

"Research shows that at a young age, boys and girls start out at a very similar level in spatial skills," she said. "Having experiences building with your hands earlier on helps develop those skills."

Girls simply don't have as many options as boys when it comes to building toys, putting them at a slight disadvantage, even though girls and boys start at the same level.

Females also have fewer STEM role models to look up to.

"Seeing that the people who are in those jobs are a lot of men makes it harder for girls to envision themselves in those sorts of positions," she said. "That's something that's a work in progress."

Eventually, the women-in-engineering discussion led Chen and Brooks to became the co-creators of Roominate.

To create Roominate, the two did testing with younger girls in their homes to see what toys they responded to.

"We brought in toys that we thought had interesting aspects to them, like we brought in Snap Circuits and Lego Friends just to see how they would react," she said. "We found that the girls did like building and that really what they needed was more of a context of why they were building."

Roominate provides that context by giving girls the chance to creatively build their own homes, structures and more. It also integrates simple engineering elements.

"Roominate combines these aspects of building and circuits, everything that we think is really important for girls to be exposed to at a younger age," she said. "At the same time it enables them to be creative. Everything about it is so open ended, you can really create anything you can imagine with Roominate."

Showing girls circuits at an early age is an important aspect of the toy.

"In the classroom when circuits are brought out, a lot of the time the boys will jump to the front of the classroom because they've seen them in other toys," Chen explained. "They're familiar with them and they get excited about it. But girls aren't exposed to those things, and when they wonder why they're not as excited about them, they assume that circuits just aren't for them."

Exposing girls to circuits early in life gives them the same footing boys have in the engineering field.

Most of all, Roominate comes with suggestions and tasks rather than a set of how-to instructions. It requires girls to put on their thinking caps and come to conclusions on their own.

"Roominate is helping develop their hands-on problem solving skills, because they have these pieces in front of them and they have to figure out how  to build what they need to build."

Girls work to figure out what pieces they need to make a windmill that spins, or to create a spiral staircase for their toy house.

"That's a really important skill even beyond STEM, just really for any field you can pursue," she said. "What differentiates Roominate is just how open-ended it is, and how you can really create anything that you can imagine."

Chen hopes that down the line, Roominate will show more girls that there is a place for them in the science world. The more women there are in STEM, the better, Chen said.

"Women make up 50 percent of the population," she said. "It's important to get all of those points of view, by having both men and women represented. Each of them offer different perspective based on different life experiences and it's really important to be able to bring all those in to figure out how to make the world better."

Roominate fans often send pictures of their creations to Chen and Brooks. Often, these designs are something the creators of Roominate had never even imagined.

For example, one girl sent in a picture of her own creation of the Golden Gate Bridge, complete with a light show.

"It's really cool to see that she figured it out all on her own," Chen said. "We had never done bridges in our packaging or on our website or instructions."

More Roominate users have sent in images of everything from functioning cotton candy machines to car washes.

"It's just really cool to see that with Roominate they're able to come up with new ideas and really invent things on their own," she said.

In the future, Roominate has plans to expand the line to include more complicated mechanics and electronics.

"Beyond that, we want to bring in more STEM subjects into Roominate, such as biology, chemistry and programming," Chen said. "There are a lot of ways we want to go with this."

To learn more about Roominate, check out their social pages below, and be sure to join our Sweety High community if you're a girl who loves STEM!