12-year-old Rowan Blanchard is an actress who has received critical acclaim for her role as Riley Matthews on the Disney Channel series Girl Meets World! 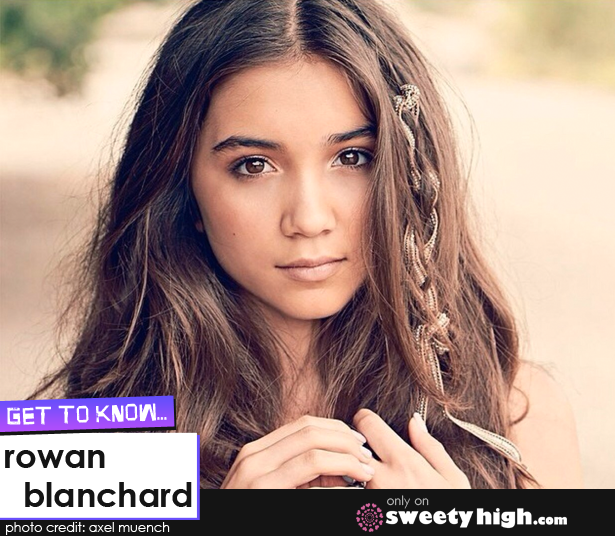 In a recent interview, Rowan told us all about her work on Girl Meets World and why being a part of the show is so important to her!

Girl Meets World is a spin-off sequel of Boy Meets World, an ABC series which ended in 2000. In the new series, Cory and Topanga from Boy Meets World are now adults with children of their own, including 12-year-old daughter Riley.

Rowan Blanchard was no stranger to the classic show when she was cast as Riley in Girl Meets World.

"I had seen a few episodes," Rowan said. "But obviously when I booked the series, I went back and watched every single episode."

While it wasn't a requirement, many of the new cast members went back to watch the series that preceded them to get a real feel for the show.

"There was never anything about 'having' to watch the series," Rowan said. "The cast just chose to do it by choice. I didn't watch it for the role specifically, but more to grasp the lesson-learning of the show."

Before she met her new Girl Meets World costars Ben Savage and Danielle Fishel, who play Cory and Topanga, Rowan wondered what their first encounter would be like. She soon discovered she had nothing to worry about.

"Ben and Danielle are two of my favorite people in this world," she said. "At first I was a little bit intimidated, because they are Cory and Topanga after all, but then I got to know them as themselves and they are equally as wonderful."

On set, Rowan found a bit of a kindred spirt in her onscreen counterpart, Riley.

"Riley and I are similar in the sense of our awkwardness, and our value of loyalty," Rowan said. "Our biggest difference is that I am much more sarcastic."

"Sabrina and I are the two best friends in the world," Rowan said. "That's something that makes our show especially real and genuine, our chemistry. It can be hard to find a genuine person in the business, but our cast lucked out. I work with brilliant and real people."

The duo also recorded the Girl Meets World theme song, "Take On The World," together.

"Singing has been a passion of mine since I was very little, and to be able to incorporate that with the show was wonderful," Rowan said. "I am very proud of it."

Though Rowan has had an incredible experience on the set of Girl Meets World, being attached to a sequel also comes with certain expectations.

"There are parts of it that can be kind of challenging, because some of the Boy Meets World fans don't realize that we are our own show," Rowan said. "If we were going to do the same exact thing as Boy Meets World, why would you watch our show?"

Thankfully, the new series is winning over many of these avid fans.

"So many people have embraced it, and they watch it with their kids," Rowan said. "That's beautiful."

Rowan hopes that there are a few things about Girl Makes World that will continue to make it stand out among other shows.

"Often times, shows for kids and teens talk down to their audience," she said. "It's almost embarrassing."

Girl Meets World aims to do something different.

"On our show, and we have made a big point about this, we talk with you," Rowan explained. "Our characters don't have it all figured out, Cory and Topanga aren't perfect parents, and the kids aren't either. It's organic. And I think that's what separates it."

She had two last words for fans of the show: "Keep watching."

To keep up with all of the latest from Rowan Blanchard, be sure to follow her on her Twitter here! You can also join our community at Sweety High to discuss all of your favorite Girl Meets World scenes and so much more!